Today’s Vet 101 is a prime example how complicated making a diagnosis can be. In most states a vet cannot legally make a diagnosis online. Sometimes even the best vet can be stumped by a myriad of symptoms and a second opinion or two is warranted. One Vet 101 reader submitted an intriguing situation involving a physical condition and behavioral issues. Dr. Letrisa Miller DVM offers several angles of looking at the situation. We went back and forth with several email exchanges to take this reader question to a deeper layer. While insightful, I hope it demonstrates how important it is not to rely solely on online advice and to seek an in-person veterinary consultation. I’ve made holistic behavioral suggestions not addressed in this response and was impressed with this cat guardian’s dedication and patience with a challenging condition of her much loved cat.

Q: (Edited). MMM is a high strung seven-year-old, part Siamese, semi-feral female adopted three years ago and spayed at that time. She adjusted to a new cat mom and is affectionate with her and one of three other cats but continues to show aggression to the other two. There were many cat fights. In Oct. J bit MMM and they’ve been separated since. About two years ago, MMM removed her temple fur and she was on prednisone, which helped. She was checked for allergies, and had scrapings for parasites. Her fur started to grow back. A little over a year ago.  MMM started her hair removal again.  We tried the prednisone without any affect, I’ve tried pheromones, calming collars, treats, drops, Spirit Essences, everything 2 vets and I could think of. Nothing worked.In April MMM was put on Prozac (the vet said it was OCD). First the first time I felt like we were on the right track.  She stopped obsessing about from under the door and she stopped hissing at C. Now that she isn’t antagonizing him, he stopped chasing her, but she is still going at her fur.We decided to try a tranquilizer, hoping she would relax enough to leave her fur alone.  And it worked for a couple days, but she was still fussing with her temples, so I put a soft collar on her. I’m hoping the scabs will heal and the behavior will stop. Currently she is on Acepromazine 2.5 mg twice a day & 5 mg Prozac once a day. Any help appreciated.

A: What a difficult problem you have! Poor MMM.I can give you some general information, but because of laws against practicing medicine without physically seeing the patient, I can’t comment on MMM specifically.Hair LossCats that have hair loss (alopecia) in the area in front of the ears often suffer from a food allergy. They tend to lose hair and get small scabs from pustules that have burst (rarely will you see a pustule before it pops). Why food allergy causes this pattern is unclear, but the pattern itself is quite clear in cats. The top food allergens for cats are fish, beef, dairy, corn, and wheat. The vast majority of commercial foods contain at least one of these items (and often more than one), so switching from one brand of commercial cat food to another without consciously choosing a diet that does not contain these ingredients will rarely result in improvement.Food allergy tends to start showing up in cats around the age of six years. Symptoms can occur at younger ages and may not occur until later, but six years old appears to be the most common age of onset, according to one allergist with whom I have consulted.Blood and skin tests for allergy are not accurate for cats and may be misleading. Independent research into available testing has shown that none of the tests can be correlated to clinical signs or outcomes. Food allergy is best tested using an elimination diet.

The easiest way to accomplish the test is to feed a hydrolyzed protein diet (Royal Canin is my favorite) for a minimum of eight weeks—a 12-to-16-week test is best—to determine whether the symptoms resolve. The hard part of the test is giving the cat enough time to ensure that all nonhydrolized protein sources have been eliminated from the body. Eating even a single piece of food that is not made of hydrolyzed protein can invalidate the test, requiring the timer to be reset. Despite the time commitment (and the cost: hydrolyzed diets are difficult to manufacture and are thus very expensive), the result is worth it. No cat wants to suffer from allergies, and most human beings are more than happy see an end to their cat’s symptoms, be they alopecia, constant itching, vomiting, or all of the above.

When dealing with tamed feral cats, please always remember that they are wild animals first and domestic cats second. Most cats that have a feral kittenhood without human socialization will always have some level anxiety in our households. They are prey animals, and they know it. This makes them jumpy and suspicious of large animals like humans that could eat them. (You won’t eat a cat and I won’t eat a cat, but the cat can never be sure of that.)

Different cats handle stress in different ways. Some hide and won’t come out; others get angry and find someone to take their frustrations out on. I often think of human toddlers when trying to understand what cats are doing and why. The similarities are numerous.

When frustrated they either turn inward and withdraw or they get angry and act out. Often the acting out is not logical or directed at the source of the frustration. When the frustrated critter, human or cat, doesn’t feel well for any reason, the problem escalates. One way to think of the situation is if you have a headache and have no way of talking. A loved one starts making noise near you. You have the options of putting up with it even though it makes your head hurt worse (withdrawal), leaving (withdrawal), or getting angry and lashing out. Cats respond similarly, so a cat that has been getting along well with a housemate may suddenly start attacking when it doesn’t feel well. The emotional release gained from the attack may be satisfying to the cat and over time could become a habit or conditioned response.

One way to try to break a conditioned response is to interpose yourself between the cats and redirect behaviors. If you are in a room with the aggressor cat (Jill) and the attacked cat (Jack) comes into the room, say to Jill, “Look here’s Jack,” and give Jill the thing she likes best to redirect her attention to something positive that also makes her look away from Jack. The reward could be playing with a toy, a scratch under the chin, or a piece of really yummy food.

The important thing is that she must know that Jack has come into the room and her attention must get directed away from him. After a few weeks of doing this every time Jack comes into the room, she will become conditioned to look away and have a positive feeling or expectation. This sort of training can take up to 12 weeks, so persistence is important.

Another way to help break the cycle, although it is a more negative response, is to use “time-out.” Time-out is putting the aggressor cat in a less-desirable space such as a kennel or small room and closing a solid door so that it cannot see what is going on in the rest of the house. The punishment should last for only two-to-three minutes, and the cat should simply be picked up (if you can do so safely) and put into time-out at the first sign of aggression (often a stare). Don’t speak harshly or behave aggressively or in any way involve emotion in the punishment. The goal is to get the cat to associate an effect it doesn’t like (time-out) with a particular cause (aggressive behavior) and thus to start behaving in a new way in order to avoid the undesired result. If you insert your own anger or aggression in the punishment, it will only fuel more anger and aggression from the cat.

Time-out and positively reinforced redirection work well together in my experience. Improvements in behavior are often seen in a few days to a few weeks. Sometimes, though, the behavior gets worse just before going away, so don’t give up!

Cats That Hate Each Other

Cats that hate each other—particularly females—rarely become friends. Female cats are highly territorial and will rarely accept other female cats into their core areas if they are not related or known from kittenhood. Even when introductions are done in a gradual, stepwise manner, some cats just don’t like each other. Think of this like the college roommate lottery. You may get a roomy with whom you love to spend time, but you are just as likely to get one whom you would love to lock out of the room forever.

When we present opinionated cats with new housemates, this can spell disaster. We didn’t ask their opinion first, so we really shouldn’t blame them for not getting along as nicely as we imagine they should. Unfortunately, in some cases the only option is to keep the cats separated. Sometimes by providing separate core areas (see my earlier blog post “Nine Behavior Lessons”), you can bring about a ceasefire, but negotiating a truce can be hard, and it may fall apart at any time. Even littermates who have loved each other for a lifetime can have a single falling out and never be friends again.

Some great websites with more information about introducing cats are:

THE PETTIE AWARD NOMINATIONS – THANKS TO EVERYONE WHO IS VOTING FOR US: WWW.CATWISDOM101.COM DAILY 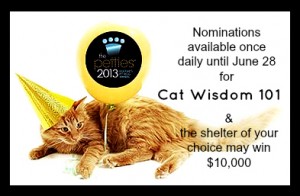 CLICK HERE TO NOMINATE CAT WISDOM 101 PLUS YOU CAN WIN $10,000 FOR YOUR FAVORITE SHELTER OR RESCUE GROUP.