Today’s shelter volunteer spotlight is on trio of black beauties available at New Rochelle Humane Society and why some cats cover their food.

Gwen is a little cutie and Traci (no relation) are young and oh so adoptable. We all know unspayed cats can get pregnant as early as 16 weeks and Traci unfortunately was one of them. Luckily the young mom was found under a deck with her one-week old kitten. The kitten found a home but Traci is still waiting. Priscilla is the kind of velvety panther black cat lovers adore. Check out and share Traci’s Petfinder profile with more pics. Ditto Gwen’s profile and Priscilla’s profile

Foster Report and Why Cats Cover Their Food

Our gray gal Nou Nou (still listed as Vicky) is doing very well. Shortly after she arrived I noticed an interesting behavior called caching. It’s not unusual for a cat to drop a toy into a food dish. It’s a vestige of the hunting instinct to hide their prey. When domestic cats pay extra attention to their food station pawing, adding or moving items it’s usually territorial. If the cat then doesn’t touch their food, it may signal they don’t like the food, the bowl or the feeding location. If the cat eats the food and then drops a toy or attempts to cover the food it’s linked to the hunting instinct. Then there are cats like Nou Nou who eat, cover and uncover their food in the true meaning of caching as an attempt to hide their food from predators or rivals for their food stash. Big cats in the wild like leopards cache to eat a portion of their large prey and save some for later. At first Nou Nou placed one toy and then another. She artfully arranged the toys as if plating a dish in a restaurant. Yes, she even included a nip nana.

At first I thought she’s be more accepting of a stainless steel bowl similar to what she had in the shelter. She was offered a choice of different types of bowls and plates and I found she ate most heartily from an antique china side plate. Whatever works is fine with me. I may need to add princess to her name. 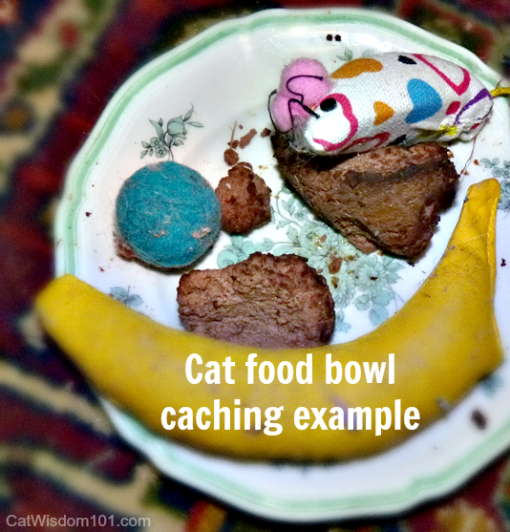 I was curious what she would do if I gave her some of the fabric I used to make one of her catnip favorite toys. I tossed the cashmere fabric remnant near dinner plate and sure enough the next morning the fabric neatly covered the entire plate. 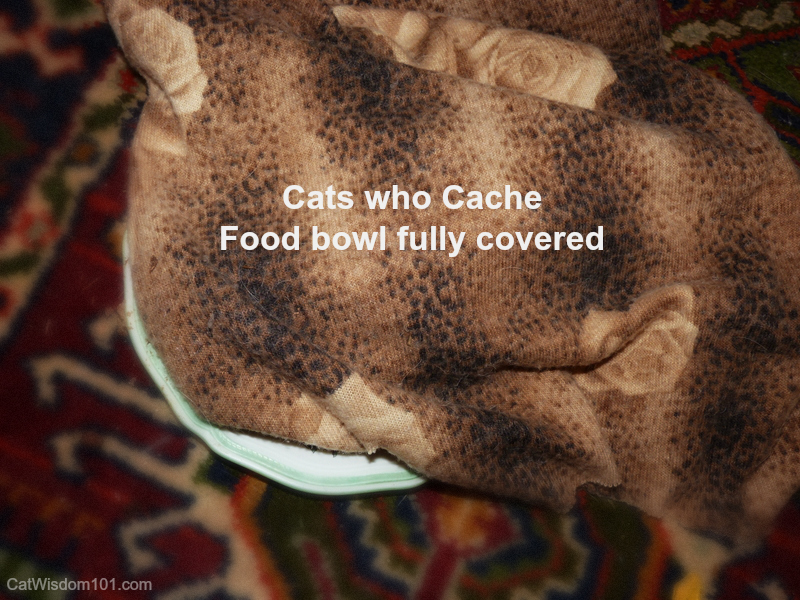 During the day I found she sometimes added some toys on the plate and position others nearby. She would turn back the fabric to eat and then cover the partially eaten meal. As a cat from a hoarding situation with limited enrichment in a shelter cage, I offered her a variety of catnip and other toys and followed her lead. She seemed to blossom from the rich sensory experience and quickly selected her favorites.

The behavior wasn’t rewarded nor discouraged but allowed to naturally evolve. The feeding station is near by desk and I could sneak glances at her pawing all around the plate as a cat in the wild would do making it just so. Indoor cats have so little chance to interact with their food or replicate the caught prey experience other than spilling it on the floor. Once she realized no one was stealing her food and her territory safe, she relaxed and hasn’t covered her food since. I haven’t removed the fabric which she has placed near her water bowl. I will have to wash it eventually and we’ll see what happens when it no longer has “prey” scent on it.

If you have a messy eater know they are in touch with their inner tiger. Don’t yell or reprimand them. It won’t help and is more likely to reinforce the behavior. Clean up any mess without using strong smelling chemicals which can make a cat go off their food. I like to steam clean with is hygienic and odorless.

22 thoughts on “#AdorableAdoptables Black Beauties & Why Cats Cover Their Food”