This is a short, sweet and hot Caturday while I’m in NYC attending a Broadway themed, fundraising fashion show by Ada Nieves for Pets with you guessed it, cats! Nine MEWdels will rock the catwalk and it’s all for a good cause. The glitzy event at the venerable Algonquin Hotel to benefit the Mayor’s Alliance of NYC Animals  Not only will there be fab cats strutting their stuff but Tara the Hero Cat is making a special appearance with Broadway cat actor Vito Vincent. Presiding over the feline festivities is Matilda, the ragdoll shelter rescue turned mascot and hotel resident superstar. Talk about a rags to riches story.

A full photo report is in the works.

I’m going early to see the kittens up for adoption from Bobbi and the Strays If you happen to be strolling by on 44th St,.the Alliance adoption van will be parked in front of the Algonquin Hotel hotel from 3:00-7:00 p.m. 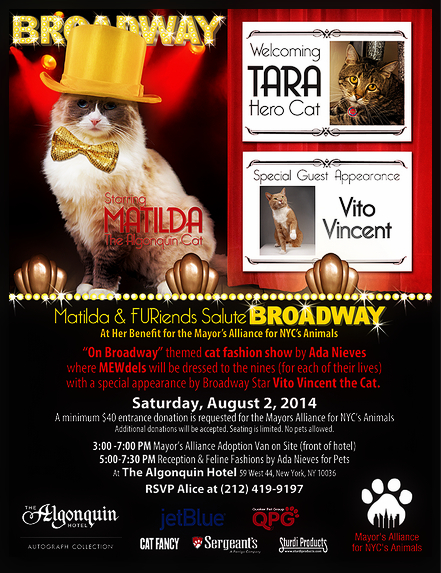 Back home in the ‘burbs my cats do not feel left out. Well maybe Odin would like to be in spotlight but I can’t imagine him walking down a catwalk for all the tuna in the world. He’d rather be lounging after snorfling in the dirt looking for truffles, moles or a short cut to China. Yes, my boy has dirt boogers in his nose but he does clean up nice. Clearly reading How To Make Your Cat an Internet Celebrity has not worked for Odin. Oh well, maybe in one of his other nine lives.

My favorite and extraordinary cat video this week is Lil BUB with live tigers. There no question they’re communicating with BUB in a friendly way and not as prey. The chuffing sound the tigers are making is happy and friendly greeting like, “Hey Lil BUB, you’re just like us only smaller.” Scientists have genetic proof that house cats have 95.6% of the same DNA as tigers and now we this awesome video display.

Did you enter our giveaway for the funny cat book being released TODAY? We’re giving away three copies of I Knead My Mommy: And Other Poems By Kittens but hurry! The winners will be announced tomorrow when we’have an exclusive Q & A with NY Times bestselling author Francesco Marciuliano.

And you know we have to ask for a vote. Only a few more days folks. Thanks for your patience and support. VOTE right here.