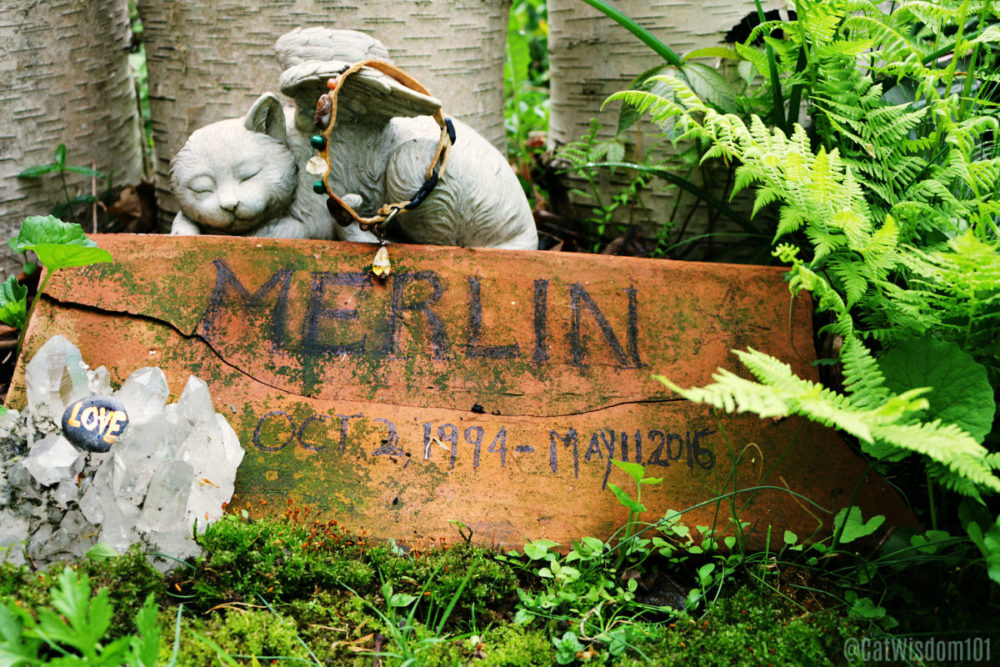 Merlin The Feline Muse Back From The Grave

Two years ago today we buried Merlin, our feline muse, in the garden. He left such a deep paw print on this blog, it’s as if he never left. Merlin Memorial 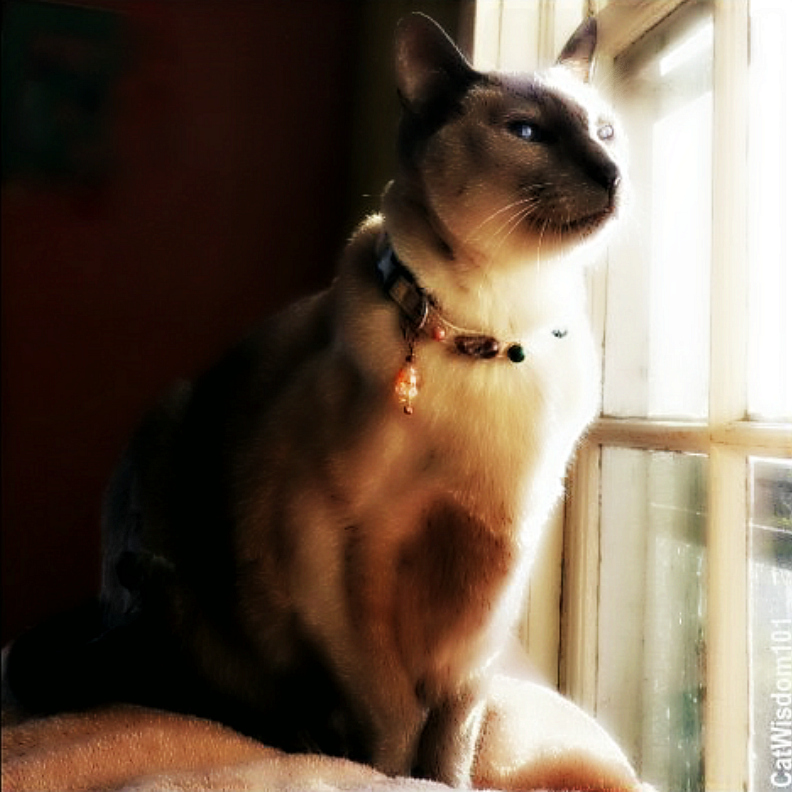 Leave it to the wisest, old cat to ascend to the heavens when the wisteria was in bloom. Wisteria is the traditional flower of love, comfort in times of mourning, long life and immortality. It blooming like crazy now; its vines climbing down the driveway, twisting 30 feet up in tree tops and even up on our roof. 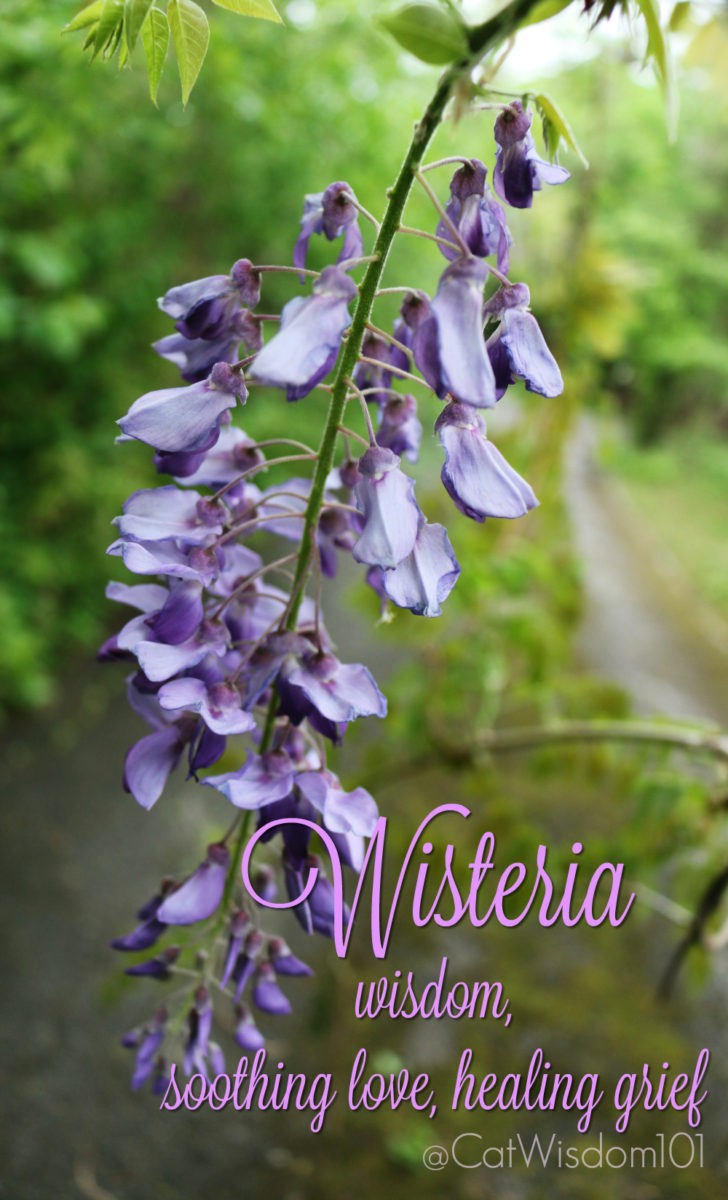 Last week I made a flower essence of wisteria and it’s good for humans or pets. More about that another day.

For the past two years, I’ve regularly cataloged Merlin’s mossy memorial mound and adjacent grave of Gris Gris in all four seasons. It’s been a form of meditation and reminder of the transitory nature of life. In recent posts, you can see the transition from drab, winter weary browns to the first signs of life.

Objects like crystals, candles and mementos come and go with the seasons but the original terracotta marker has cracked and Merlin’s name faded. It’s symbolic of change and it remains unclear what I’ll do. I added his name in ink for now. And his healing crystals collar.

Why do people
Lavish decorations
On this set of bones
Destined to disappear without a trace? 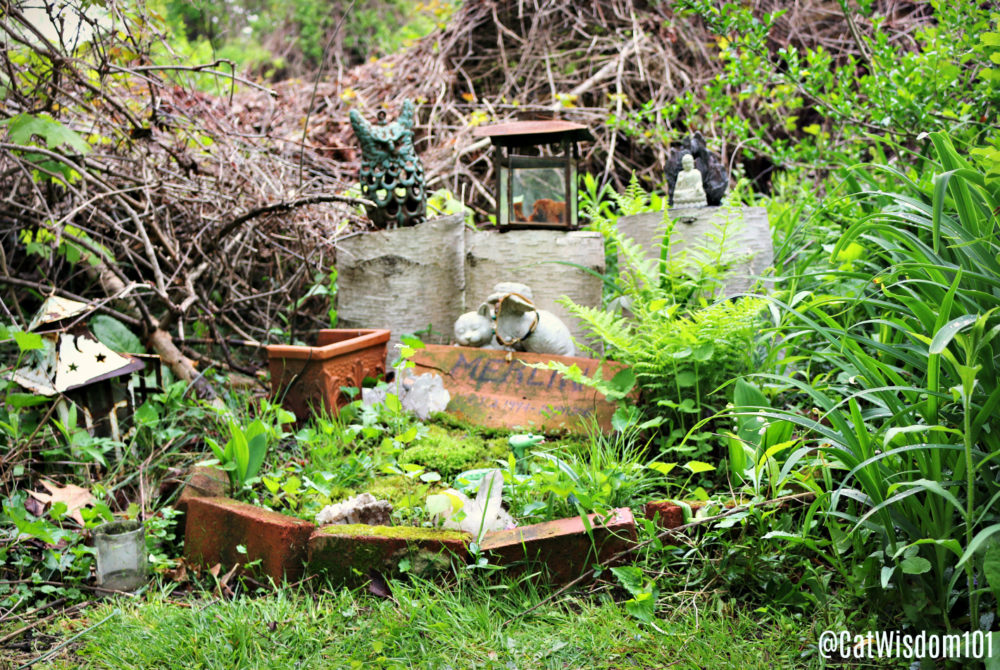 As of yesterday, the lily of the valley poked its ivory heads above the emerald moss, living proof of resilience. Merlin would approve.  He would also agree with letting go. I felt his presence for the first time in awhile and the depth of residual grief surprised me. His loss was enormous but he made it so easy for me.  That was before my mother died and now May is forever a death anniversary of my dad, Merlin and Mother’s Day. The intermingling of pet and human grieving is a complicated stew.

All three are the dust of skeletons and in the words of 14th century Zen master Ikkyu: “What is not a dream? Who will not end up as a skeleton? We appear as skeletons covered with skin — male and female. When the breath expires, though, the skin ruptures and there is no more high or low. Underneath the skin of the person we fondle and caress right now is nothing more than a set of bare bones. Think about it — high and low, young and old, male and female, all are the same. Awaken to this one great matter and you will immediately comprehend the meaning of “unborn and undying.”

It’s time to let go, accept change but no one said it would be easy. 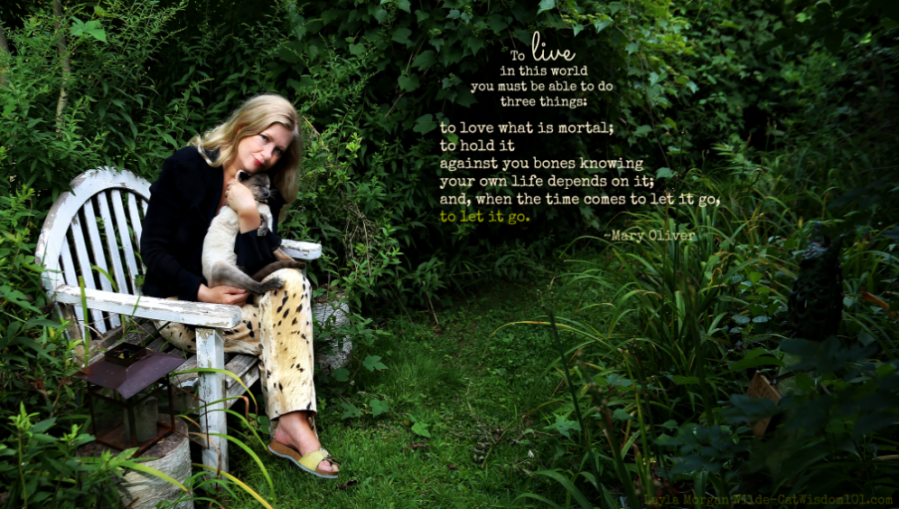 Our digital detox continues and that means unplugging as much as humanly possible. I’d recommend listening to Odin. Unplug yourself and get out in nature. Cats know best. Merlin was a huge fan of “hammock time” picnics in the garden, and daily walkabouts right until the end at age 21 years, 5 months and 9 days. I’ve never known any cat with more joie de vivre and a will to live. He was grounded, wise and ethereal all at once. If I ever second guess about going out in nature I ask: what would Merlin do? 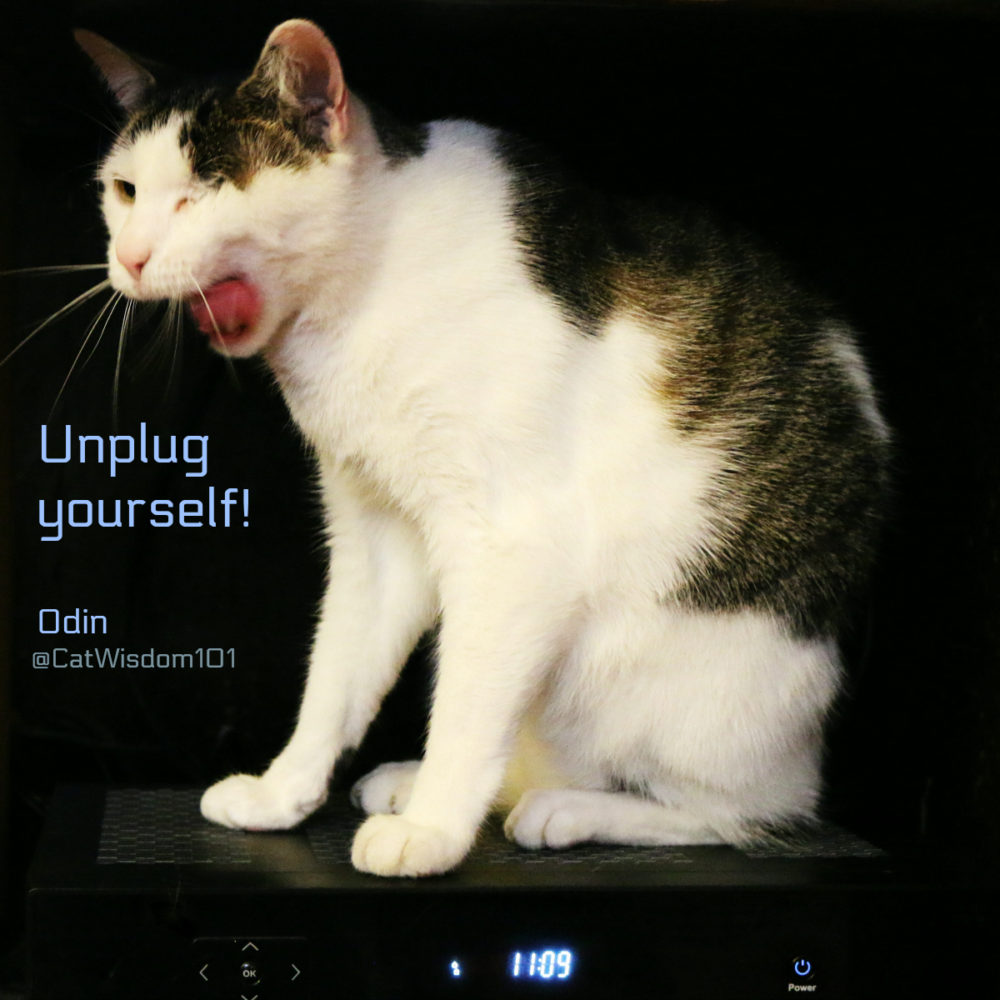 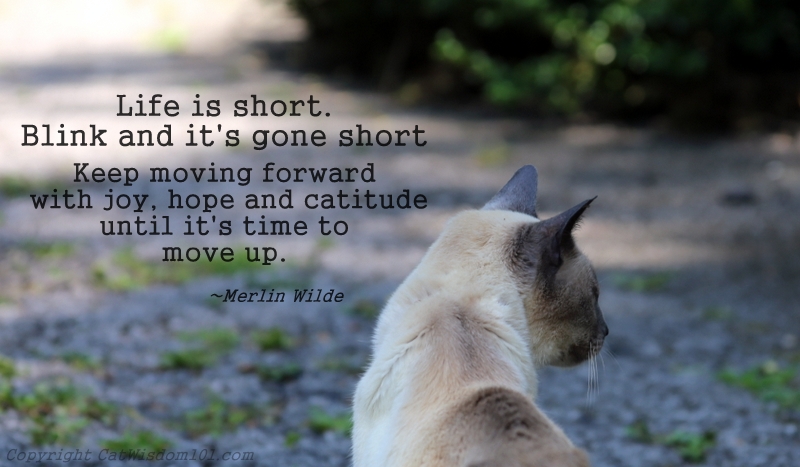 Rain or shine, have a riotously blooming week. See you soon. Thank you for your continued good wishes. 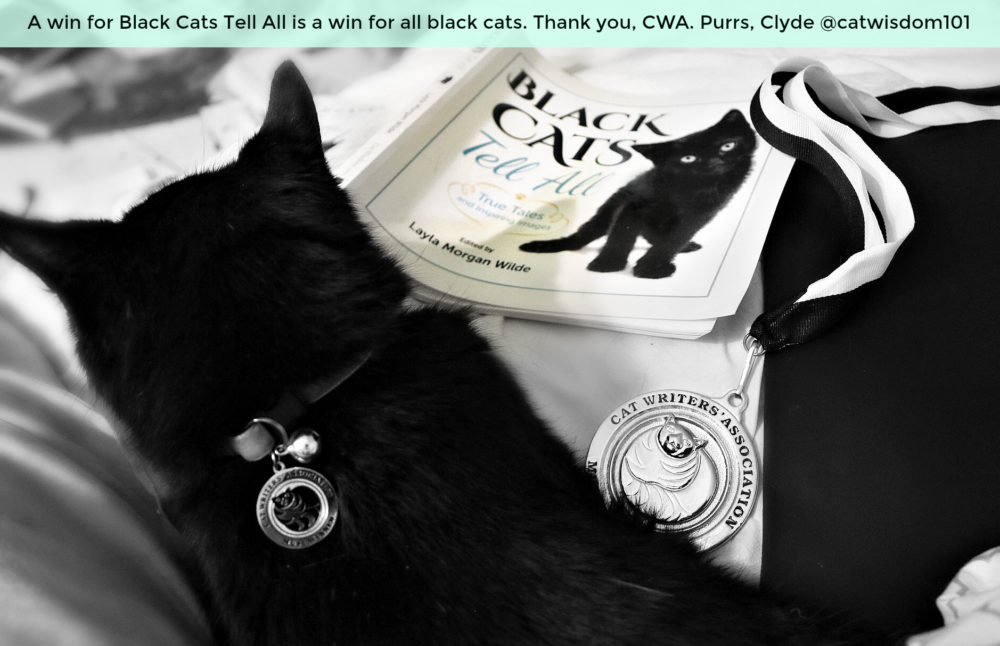 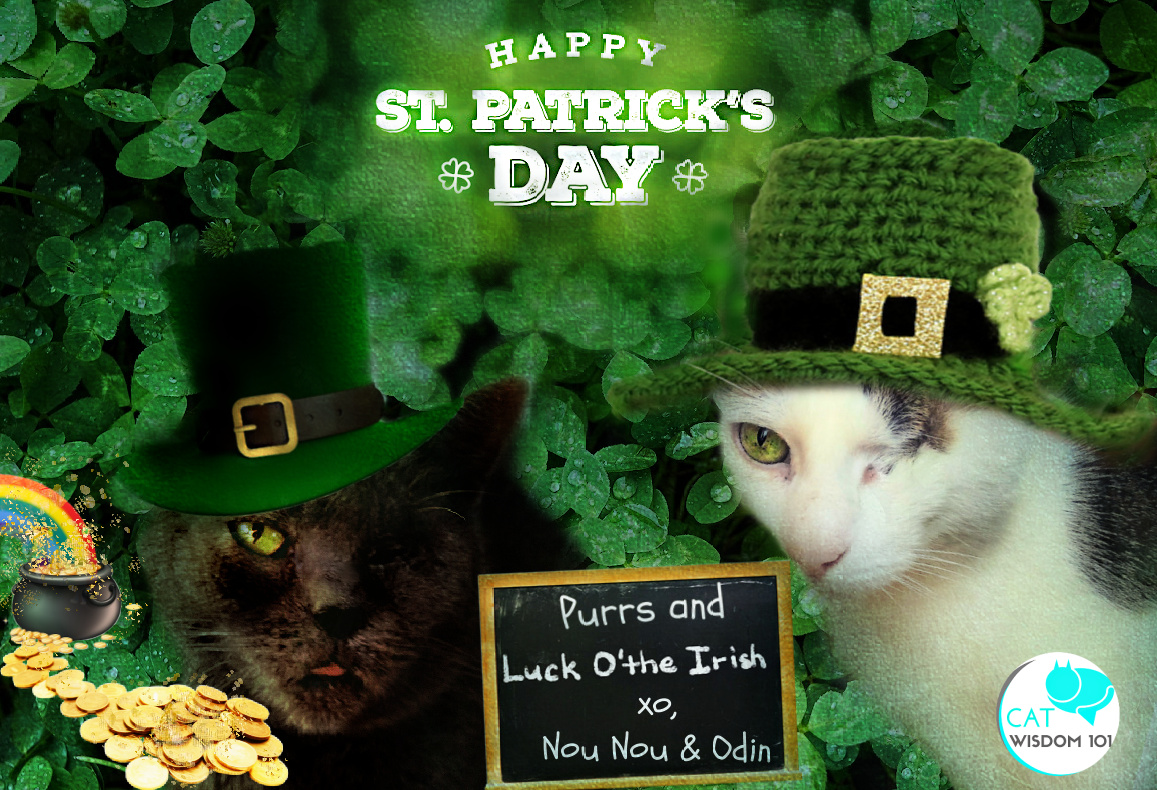 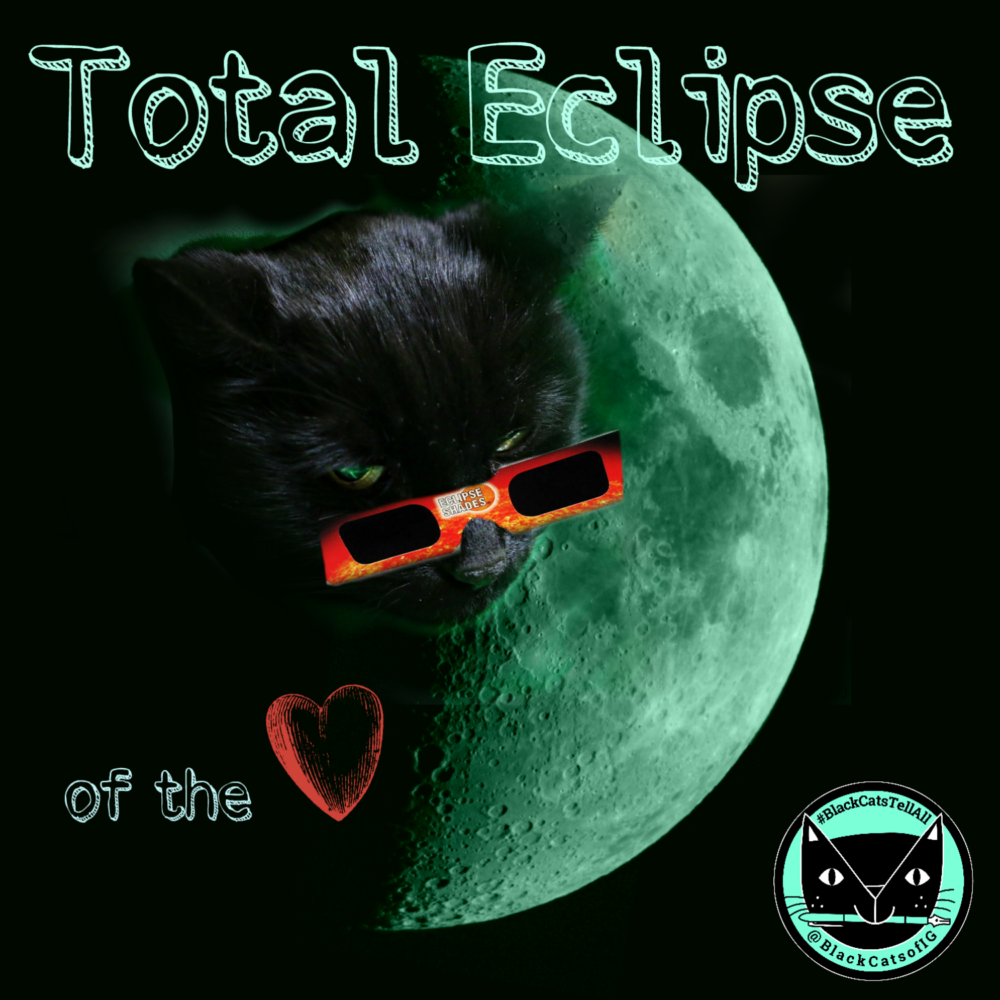 Total Eclipse of the Heart Cats