As many of you know, our dear Gris Gris died last week and I’d planned a tribute today but fate had other plans. A wicked snowstorm buried all evidence of the burial last Friday and I felt  emotionally snowed under. Odin, whined to go out early yesterday morning and I thought nothing of it. He loves the snow and I snuggled back under the duvet. When I got up, something drew me to look out the window and this view greeted me.

The butterfly marks the spot of Gris Gris’s grave and the footprints are Odin’s. I have no doubt he wanted to visit his friend.

It feels light-year’s ago but last Friday was sunny and warm enough to dig a grave wearing autumn clothing. When Coco, Merlin’s sister died three years ago I was determined not to repeat the same digging fiasco. We tried digging in half dozen spots only to meet stubborn roots and resorted to a less than ideal location by the barn. When a big tulip tree uprooted during a Nor’easter two years ago, the remaining root ball created a perfect burial mound. The tree stump sat on a lush mound of ivy, sprouted daffodils in the spring and day lilies in the summer. A small cave-like opening revealed enough space to bury ten cats but I only wanted a spot for Merlin. I silently cheered: a space fit for a cat god and no digging required.

God and Mother Nature had other plans. Gradually the designated “burial mound”  flattened and sunk. Last summer Odin loved nosing about the earthy hanging roots and I noticed the burial space had shrunk drastically. As long as there was enough space for one cat, I was happy. It never occurred to me the one cat would be anyone other than Merlin. 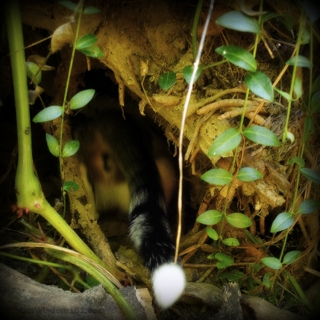 When Gris Gris died, digging the hard ground was out of the question. Hubby began clearing the earth by the burial mound but some large roots blocked the opening. Here we go again. If nothing else, if you ever plan to bury your pet, please prepare well in advance. The box we planned to bury him in wouldn’t fit through the opening. The only solution was scrapping the box and wrapping him in a cloth. But the cloth proved bulky and that meant more digging. I lost my temper and hubby stormed off. Great. So, I’m on my knees, the cold, damp earth seeping through my jeans, furiously digging with a garden trowel, tears stinging my eyes. One day I’ll find the humor in the scenario but not yet.

Thank Bast, the bundle fit. I’d brought a Tibetan singing bowl for an angelic sounding send-off and said prayers. Before hubby filled in the opening with earth, I decided to take a few last photos. The early shots, before placing the body inside looked normal but the last one had orbs surrounding him. I’d like to think they were angelic helpers assisting Gris Gris to the great beyond. Any earlier anger evaporated and a peaceful aura settled around us as the low winter sun set. 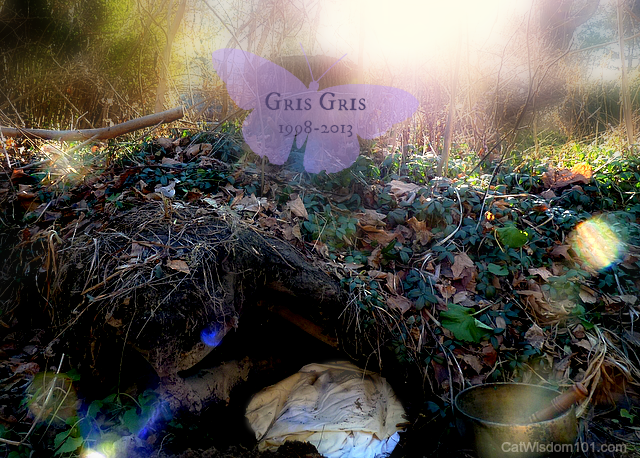 While going through the Gris Gris photo files, I came across so many wonderful images I’ve never posted, I decided I couldn’t do him justice with simply a slapdash collage. I’ll put together something meaningful with other stories in time but most of my energy is going into writing my book on holistic pet loss. For those of us who actively document their cats’ lives with photos know how every image is precious once our subject is gone. Bloggers know how healing it is to write about their pets but

Every cat has a story and telling and re-telling their story is a healing balm during the grieving journey.

These aren’t the best shots of Gris Gris but they are last ones taken while he was alive and well. I studied them closely for any hint of death whispering in the wings but noticed no clues, at least not yet. His death, like his life remains steeped in mystery. We happily sat on the sofa watching The Sound of Music five days before his final exit. He liked to sit near me but kept his usual aloof distance. Domino loves watching TV and usually sits on the nearby chaise but not this time. Odin napped in his heated Sleepypod oblivious to The Hills Are Alive…while Merlin sat (out of frame) on the chaise. A cozy family scene days away from being shattered. 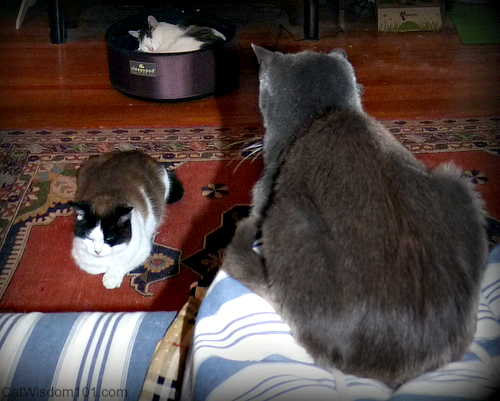 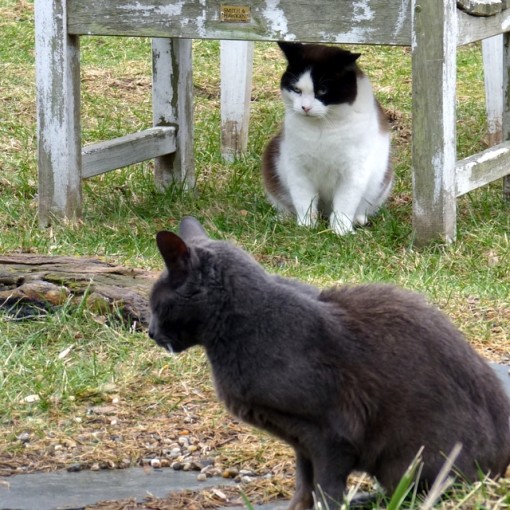 Gris Gris, my magic cat. The last shot of him facing me, if not directly. 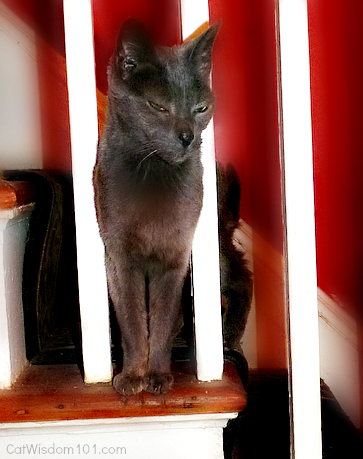 64 thoughts on “Magic, Mysteries & Pawprints On The Heart”