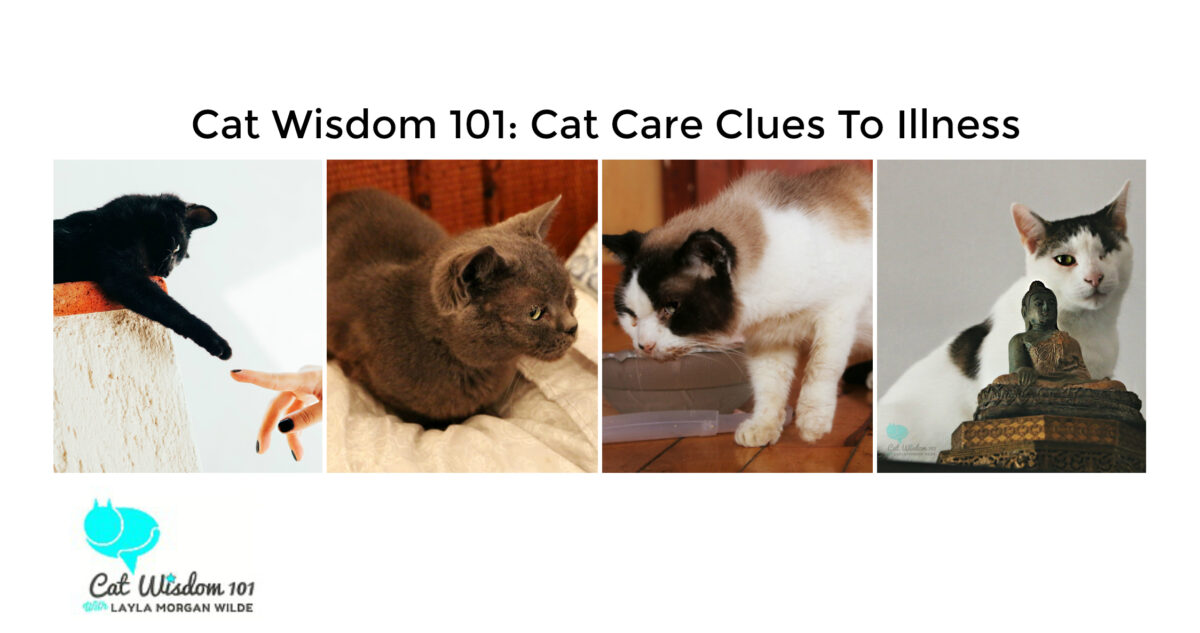 Kittens turn into cats and then in a blink they’re old. Physical and behavioral changes that are age-related happen gradually or can happen overnight. If you have a cat in middle-age and up, this post is for you. Cats are notorious for hiding symptoms of illness. We uncover hidden clues to illness in older cats with help from my own cats. If you haven’t seen our post on cat aging versus human years, start there.

This is also serves as a sad and shocking update on my own cats.

Since I began blogging at Cat Wisdom 101 in 2011, I’ve chronicled the lives of my cats. They’ve enjoyed adventures, celebrations, endured illness and disease, vet visits galore and some died suddenly and others gradually requiring palliative care.

All cat lovers agree that no matter how long they live, forever would not be enough.

Since moving house five months ago, I’ve taken greater pains to observe the subtle changes on a daily basis. Photography continues to be a visual diary. A picture really can tell a thousand words. I hope it inspires you to notice the changes in your cats. So much can shift in ONE SEASON with cats individually and collectively in multi-cat households.

We currently have four cats and these are the changes I notices in one season. Odin was a kitten when we launched and lately I’ve noticed Odin is looking older. His bright green eye (he’s one-eyed) isn’t as bright green. He naps more and snuggles with me for much of the night (a first). At the old house he had a nest on top of an armoire with antique children’s chairs hanging on the wall as “stairs”. Odin is still a tree-climbing athlete but he’s technically a senior at age nine. He get s chondroitin for his joints and we made it easier for him to climb to his aerie.

He may be older but he’s also gained vast experience as a hunter. Most of the time when he’s out in the garden, he’s on high alert, always sniffing prey. I can’t tell you how many squeaking chipmunks I’ve rescued this autumn inside the house. Others aren’t as lucky. What can I say, Odin is killer by day and mama’s boy at night. 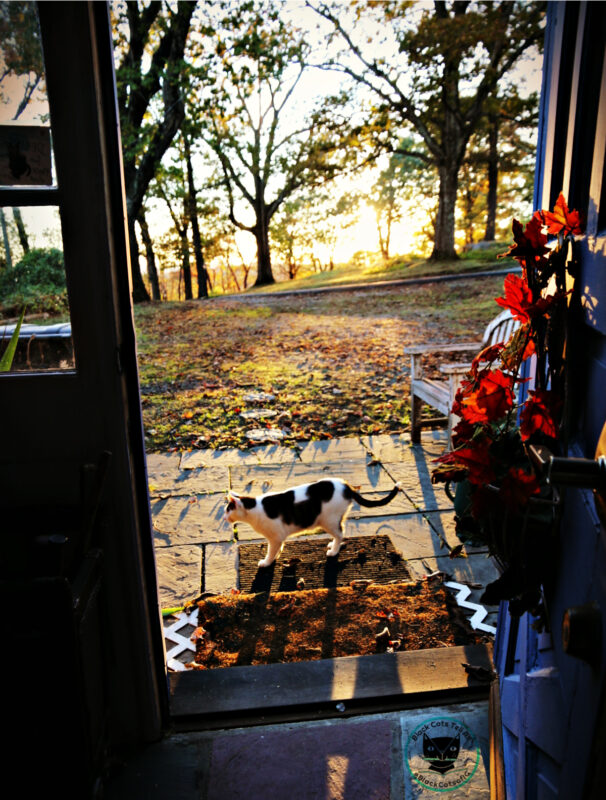 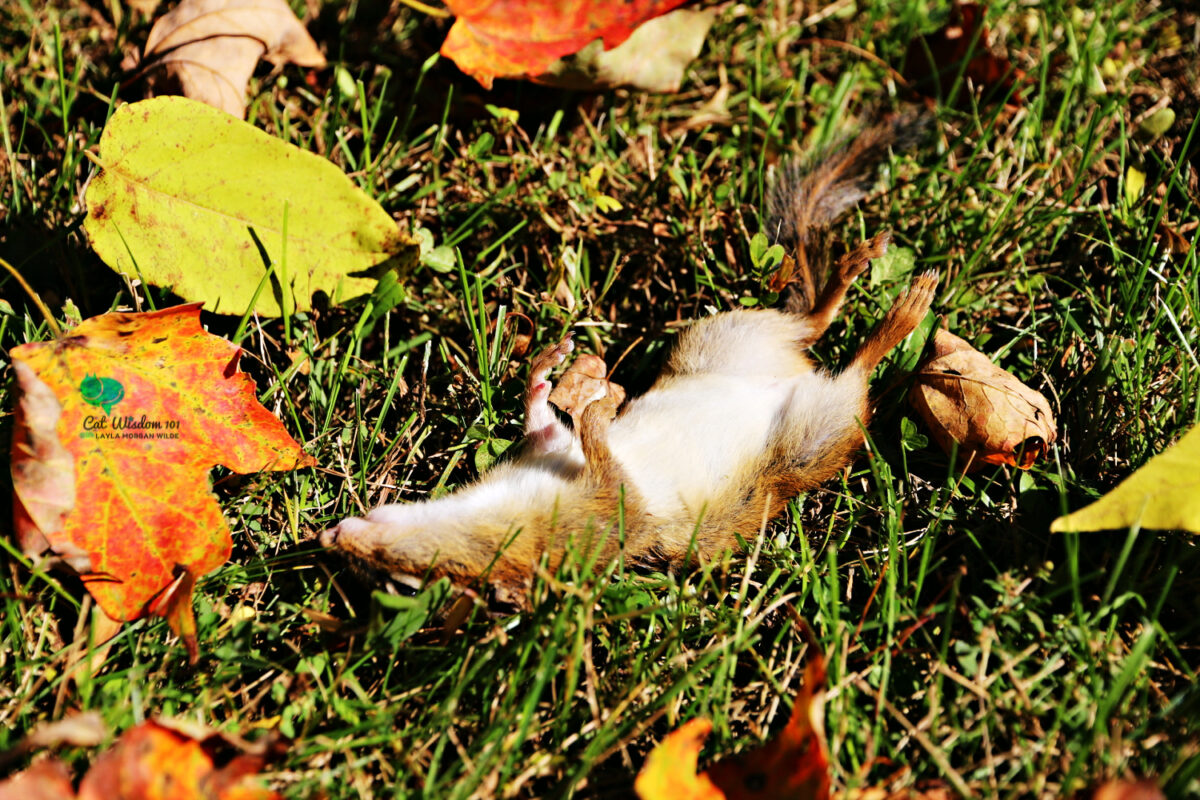 Moving right along… the only hunting our one-eyed hoarder rescue Nou Nou cares about is virtual. She used to have a friendly relationship especially with Odin but since the move, he wants nothing to do with her. She was sharing the bed with Domino up until two weeks ago. Hiding more often is an obvious clue but sleeping arrangement changes are BIG clues that something is shifting health-wise. 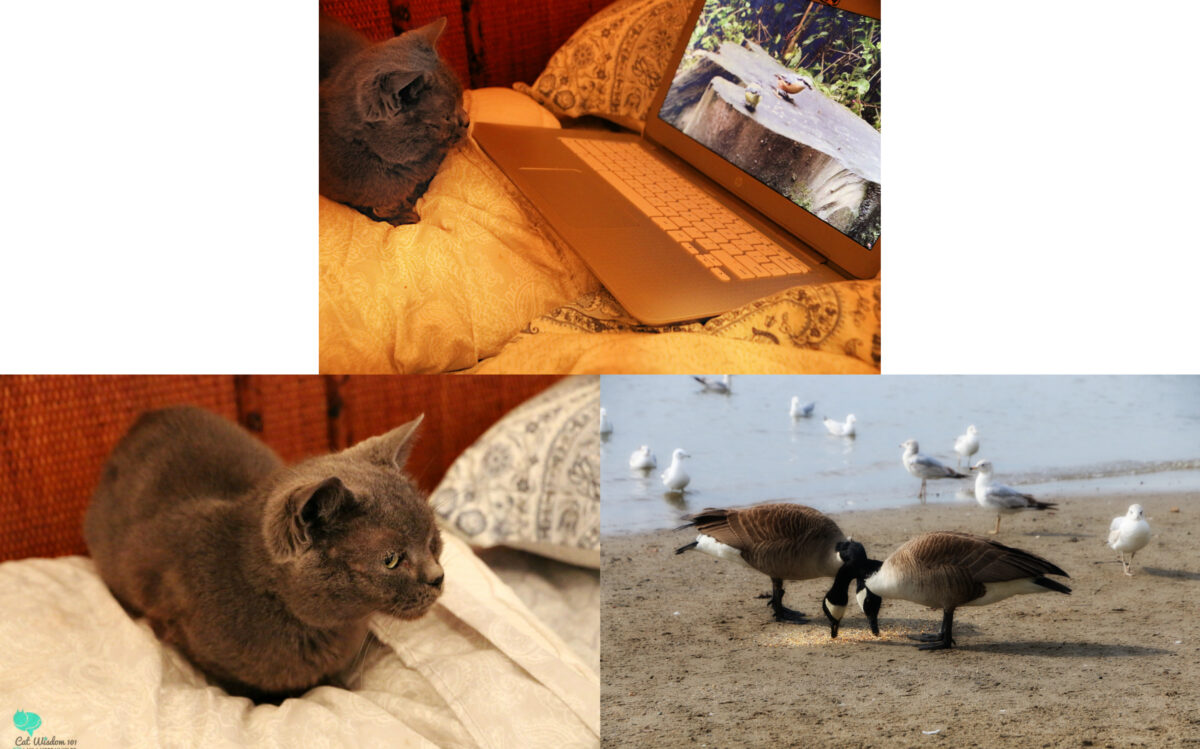 Nou Nou is creeping towards middle-age and we accept her peculiar and skittish ways. She prefers to stay in one bedroom most of the time in self-imposed exile and does her business on puppy pads in my husband’s office across the hall. A recent vet visit concluded with a shot of Covenia to address her over-grooming to the point of raw open wounds.

Since the under-lying issue is likely emotional, I started spending more time with her observing her watch a variety of TV on a dedicated laptop for her. The usual bird and squirrel TV videos on YouTube caught her interest but much to my surprise, she really enjoys children’s programming and cartoon. I also show her my own videos and photography from the Hudson River.

There are plenty of experts but no one knows your cats like you. If you get a feeling something is off, trust your gut and see a vet for peace of mind.

The most surprising shift in the past season is how Clyde is still trucking. His diabetic neuropathy has worsened but he’s more adamant than ever to go outside in the garden several times a day. All summer a ceramic pot filled with rainwater and last week he discovered it. You’d think it was the long lost fountain of youth. I washed it out and he loves the rain water as much as his fountain. Excess drinking is the classic symptom of early kidney disease or diabetes. In Clyde’s case, he has both diseases and we make sure he has lots of fresh, filtered water in several locations. 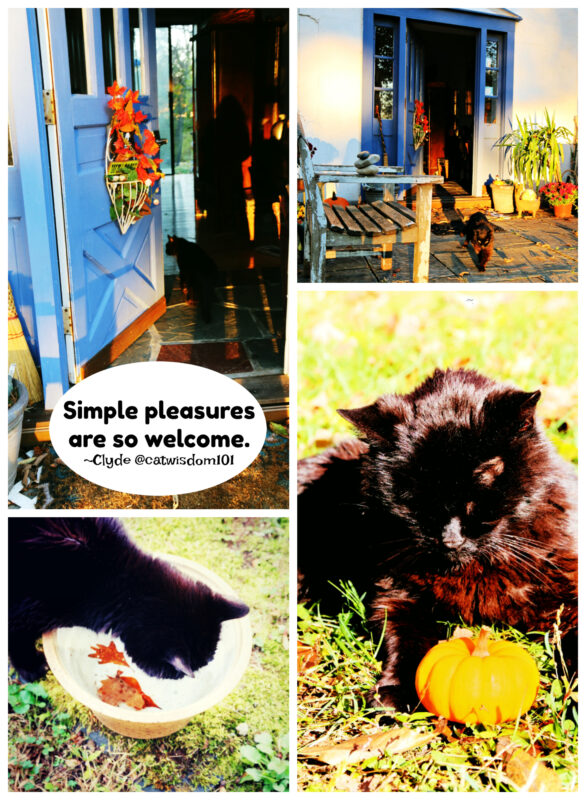 He doesn’t mind a little rain but on colder days is indignant as if I’m a miserly weather god. 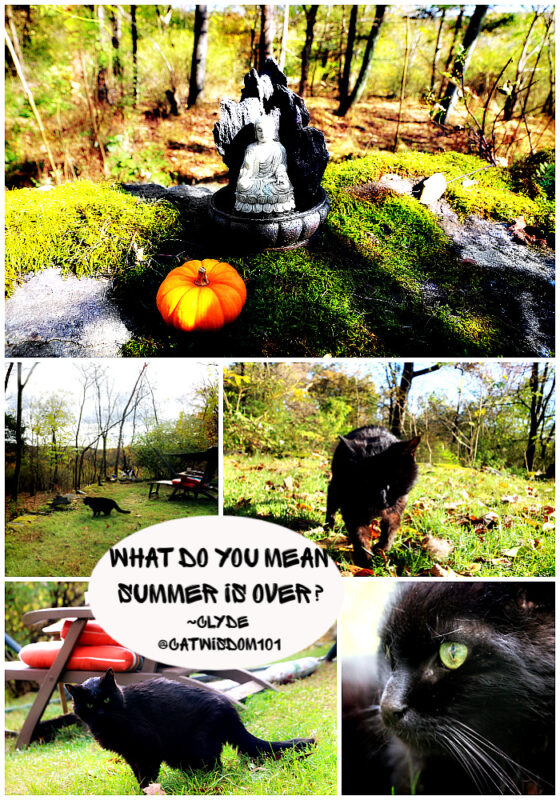 Last but not least is Domino. Our intrepid former feral, age 16 who is FIV+ with kidney disease, a heart murmur and God knows what else pulled the rug from us last week.

The biggest clue to watch for? LOSS. Weight loss, loss of appetite, loss of normal interests and lack of grooming. He started sleeping near Clyde in the living room where we placed a heating pad. He’d gotten fussier about food, lost interest in grooming and one day it occurred to me I hadn’t taken more than a couple photos of him all summer. 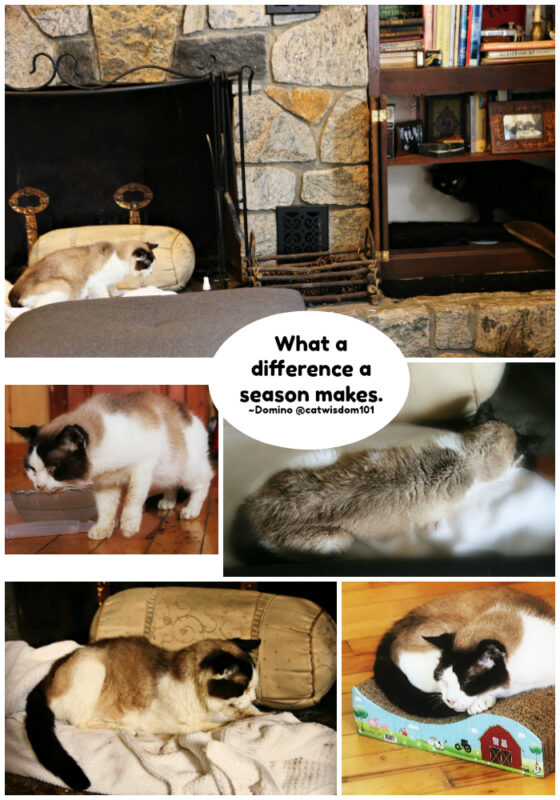 He’d grown thinner but I didn’t notice the boniness until recently. A slight limp was chalked up to arthritis .A local vet paid a visit this summer and no alarm bells went off. We figured it was his teeth and wanted a second opinion about possible dental work. Look how clean he looked in the last photo. Something was clearly wrong so we brought him to a new feline only vet practice.

It was one shock after another. Domino has lost half his weight. The burly, fat-cheeked boy is a frail 6 pounds. Nasty stomatitis accounted for the painful mouth. One kidney was noticeably larger than the other and the lovely vet suggested an ex-ray. We expected a cancerous tumor but got a bigger shock: Osteo sarcoma in his hind leg, the one he favored. Cancer and an aggressive form at that.

Expect the unexpected. The health of our cats can change overnight. Will you be the first to notice?

I’ll be writing more about palliative care, but it’s a week of celebration and we’ve never missed a Halloween post yet, so stay tuned.

Thank you as always for stopping by. Comments are possible by right clicking.