Welcome to Cat Saturday, which chronicles the lives of the Cat Wisdom 101 Cats. I’m Domino, and this is my first time hosting. I’m a cat of few words. 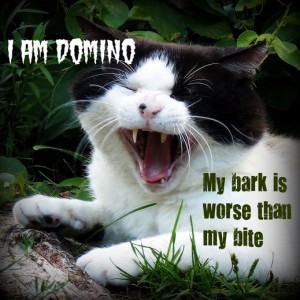 I’m feral and recently learned that I’m a Snowshoe. Something bad happened to me when I was young and I don’t trust humans. I’m happy to live on the porch but since I lost my family jewels, I’m getting more curious about indoor life. Winter is long and cold. I would know, I’ve spent seven winters outdoors. Last summer, I wandered indoors but there were unnatural smells, scary noises and moving things in a bright black box called a TV. I’m barely a senior but I’m old for my age, and my days of being a hunter are over. There are tempting bunnies on the property, like this young one spotted the other day, but they’re too fast for me now. One time I caught one, ate the good bits and left the head as a gift for Layla by the front door. She screamed like the horse head scene in the Godfather. I never did that again. 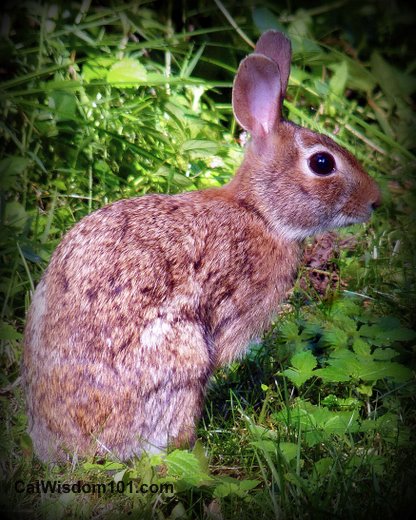 This is the most recent photo of me, waiting by the door for dinner. I’m shy and won’t look you in the eye most of the time, but I’m not shy about eating. Since my illness, I get fed multiple times a day to get my meds. Everyone thinks I’m looking better but my blue eyes are fading! Anyone know why? I guess it’s part of aging.

It’s been no fun at all being sick. No hunting. No playing. A nasty abscess infected all the bones in my left leg. It was lanced and drained a month ago and I have to be on two kinds of antibiotics for another month. Progress is slow but steady. I can put weight on the foot and walk on it but in a herky jerky way. There was a set back last week when my arch nemesis, Blackie/Ambien/Lunesta dared to swish her black floofy tail on my porch. We tussled and I chased her furry black ass to the next county. I won, but it took its toll and my limp worsened.

It’s stressful to always be on the defensive. Last week, the fireworks scared me, and then the next door neighbors brought home a dog! It’s been there all week but thank Cod, they’re only dog-sitting him for a week. The loud barking from the huge beast makes me very nervous. I won’t be sorry to see him go. The only one who doesn’t mind the monster is Odin, who is fearless and my hero. We both had a rough start on the street as kittens. I’m so glad I’m feeling better so we can hang out. He’s my best friend. 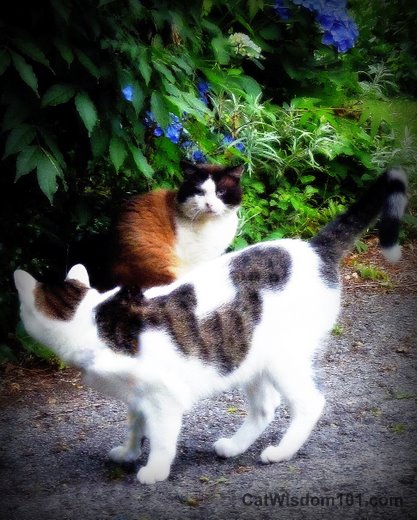 Gris Gris is too independent and half blind Merlin can’t see where I am half the time. He’s turned into a hissy Mr. Cranky Pants. 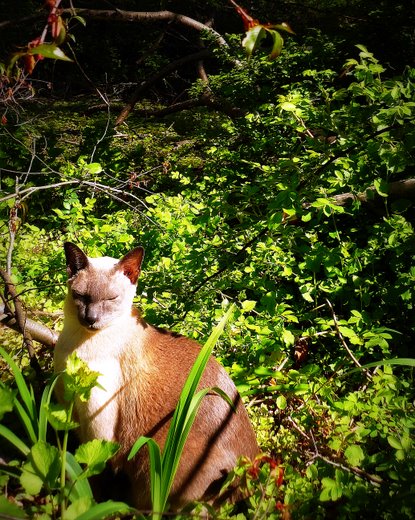 He likes to meditate and be one with nature like Emerson or Thoreau. Personally, I think he’s a purebred Siamese snob. We used to be friendlier before his new brofriend Gris Gris arrived. He dotes on Merlin who soaks up the attention. I must say, extra attention sent my way has done my heart good. All the humans send clouds of love, coo and say how handsome I am and how I’m getting stronger every day.  They’re giving me some remedy from Spirit Essences called Feral Cat Rehab that might be making me more mellow. That’s too woo woo but I believe in the power of love. I tolerate some petting, ever so little on my back, but have my claws ready just in case. These humans are weirdly patient with me. I wonder if one day I’ll be able to let my guard down and trust them. Do I dare?

Gris Gris told me he used to hate anyone touching him and now he doesn’t mind so much.  He’s becoming quite the socialized man about town. He’s even learned to announce himself with that strange screechy voice and loves to be brushed. Just don’t ask him to mew or meow. He doesn’t know how. 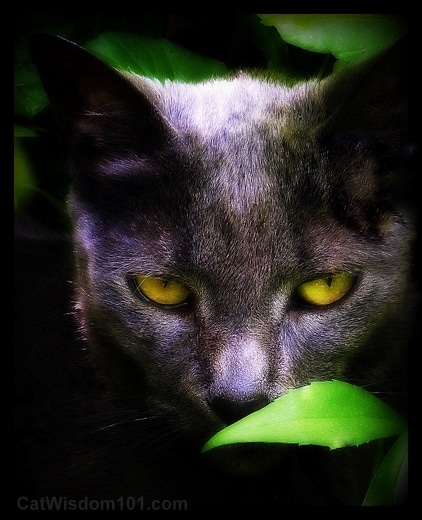 Perhaps I could teach him. When I first arrived here, I was mute as a stone for two years. I kept watching Merlin and his sister Coco (may she rest in peace) meow in loud Siamese speak. It seemed to work for them. Eventually, I learned to meow like them. I’d call for them, I’d call for food, I’d call hello to the humans and sometimes I’d call when I was roaming the garden all alone and for no reason except the joy of finding my voice. Odin’s voice has grown louder and more demanding. He’s a big cry baby if you ask me.

Odin hates being on a leash but he’s the wildest boy I’ve ever seen, and it’s for his safety. I show him the best places to scratch and leave messages for other cats to sniff. 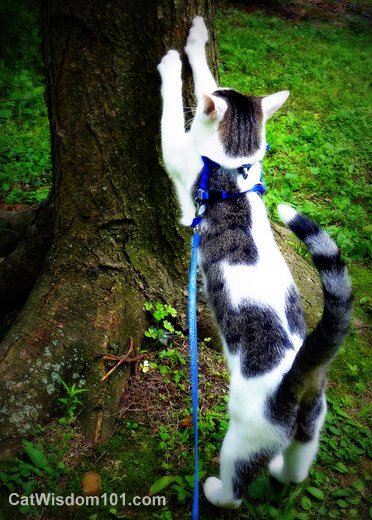 See me climbing the step? You can see I’m using my left leg; it’s wobbly, but most of the shaved fur has grown back. 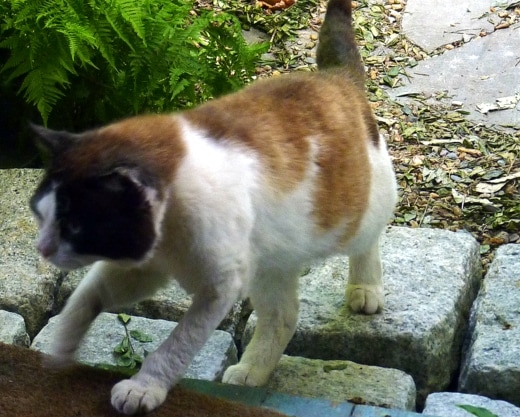 Odin swats at me but in a playful way. And who can resist that pink eraser nose of his? When he’s napping, it’s easy to forget what a handful he is. I leave the very best for last…the other evening when… 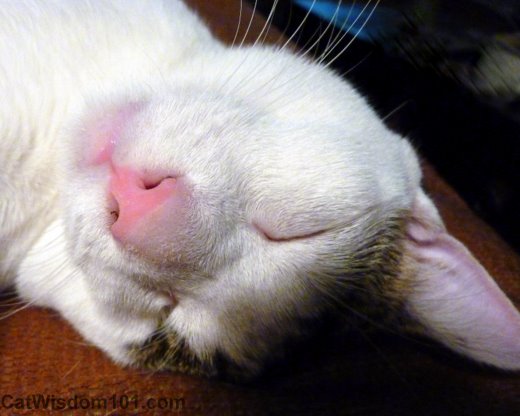 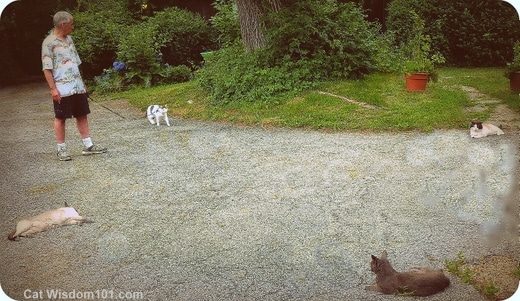 all of us hung out, at respectable distance of course. You might call it a kitty corner conference. Layla calls her man at cat man. I can’t imagine why? Ah, it’s summer and life is looking up for the first time in ages. I know I said I was a cat of few words but you dear reader have coaxed out the best in me. Some humans just have a certain way with cats! Have a good summer and tell me what is your favorite thing to do this summer with cats?

10 thoughts on “Cat Saturday With Domino”