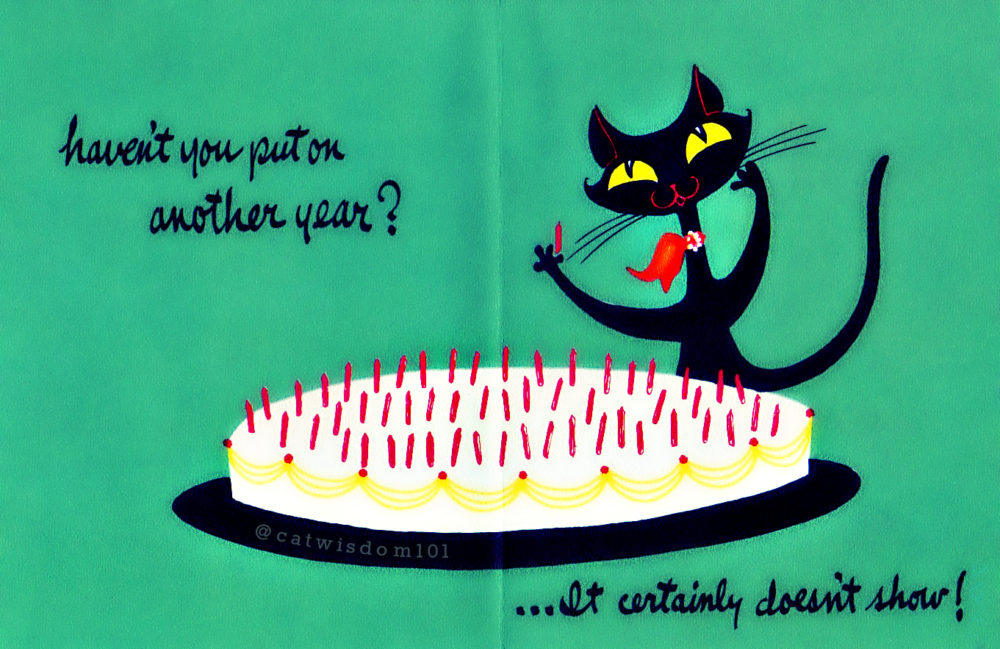 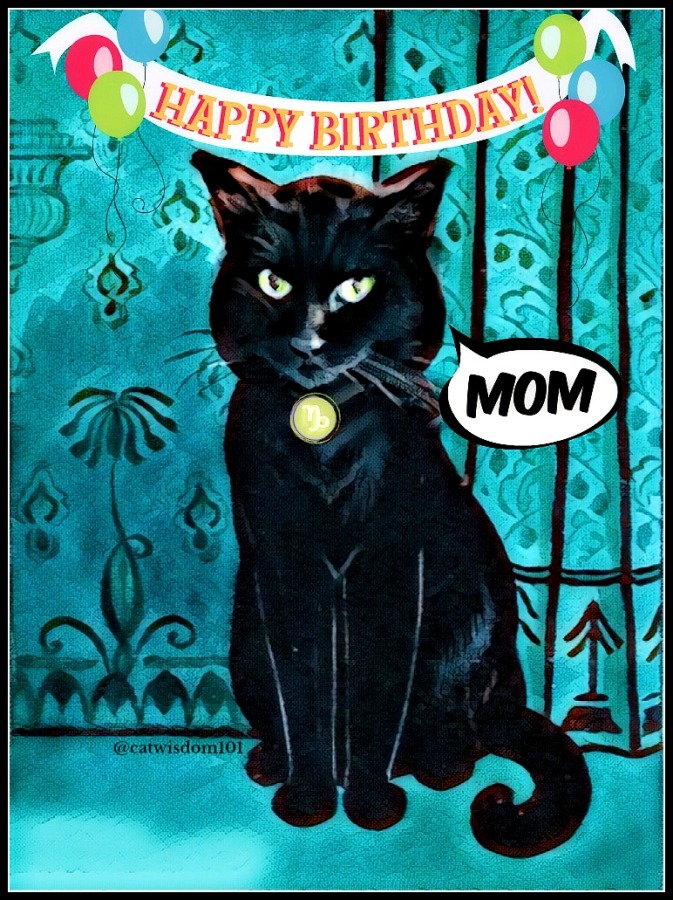 Welcome to a birthday edition of cat wisdom with feline editor Clyde. So, last night my mom Layla thought it would be fun to paint a portrait of me. It’s her birthday today so please indulge me. A friend of hers Leslie goes every month to a “paint your pet” event. Every month for the past year, Leslie kept asking and Layla was forever busy. I hope Layla’s birthday wish comes true so she won’t need to be so unavailable.

It’s true I haven’t helped by keeping her up with my caterwauling day and night. It’s shades of Merlin all over again and it’s exhausting. But think about me, old as the hills with dementia, kidney disease, diabetes, arthritis, failing vision and hearing. It’s no picnic either. But enough about me. This is about how art inspires even when it isn’t purrfect.

Layla created a nice digital painting of me and all she had to do is paint it onto canvas. Easy, right? This was coming along swimmingly. They were sipping wine, chatting about cats. There were even three other participants with black cats. Very encouraging. It was a 50/50 mix of cat and dog portraits and 100% nice pet people. 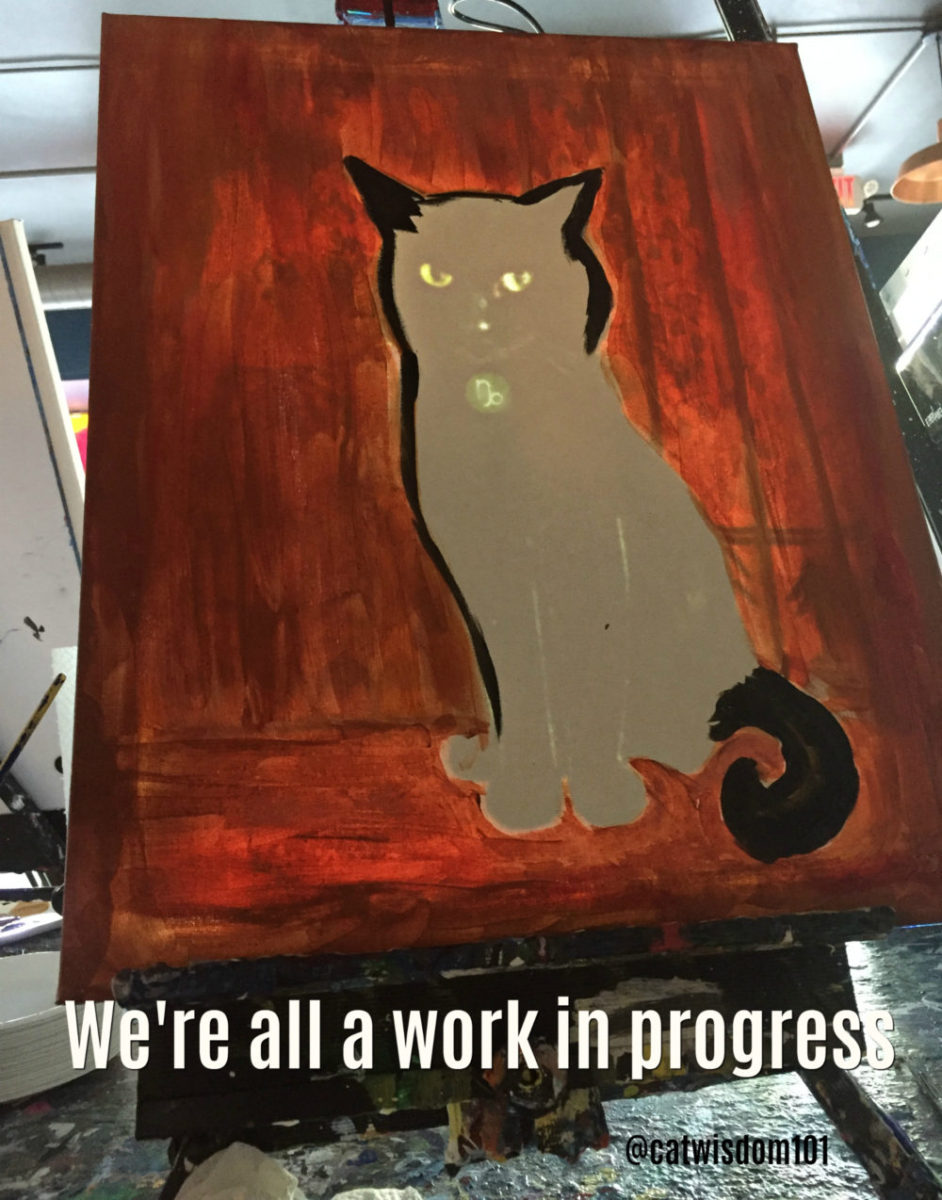 You may know my resting face is a tad judgmental. Disapproval is my middle name. I’m fussy, particular and spoiled so imagine my surprise when Layla brought home the finished portrait. 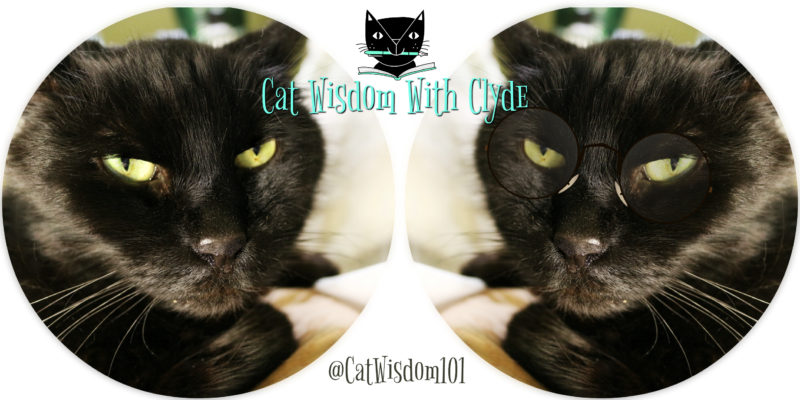 Excuse me? Is my nose that big? Are my eyes really like those of a serial killer? Does she fancy herself a low-rent Matisse? I’ll have you know Henri Matisse loved cats and knew a thing or two about painting them. 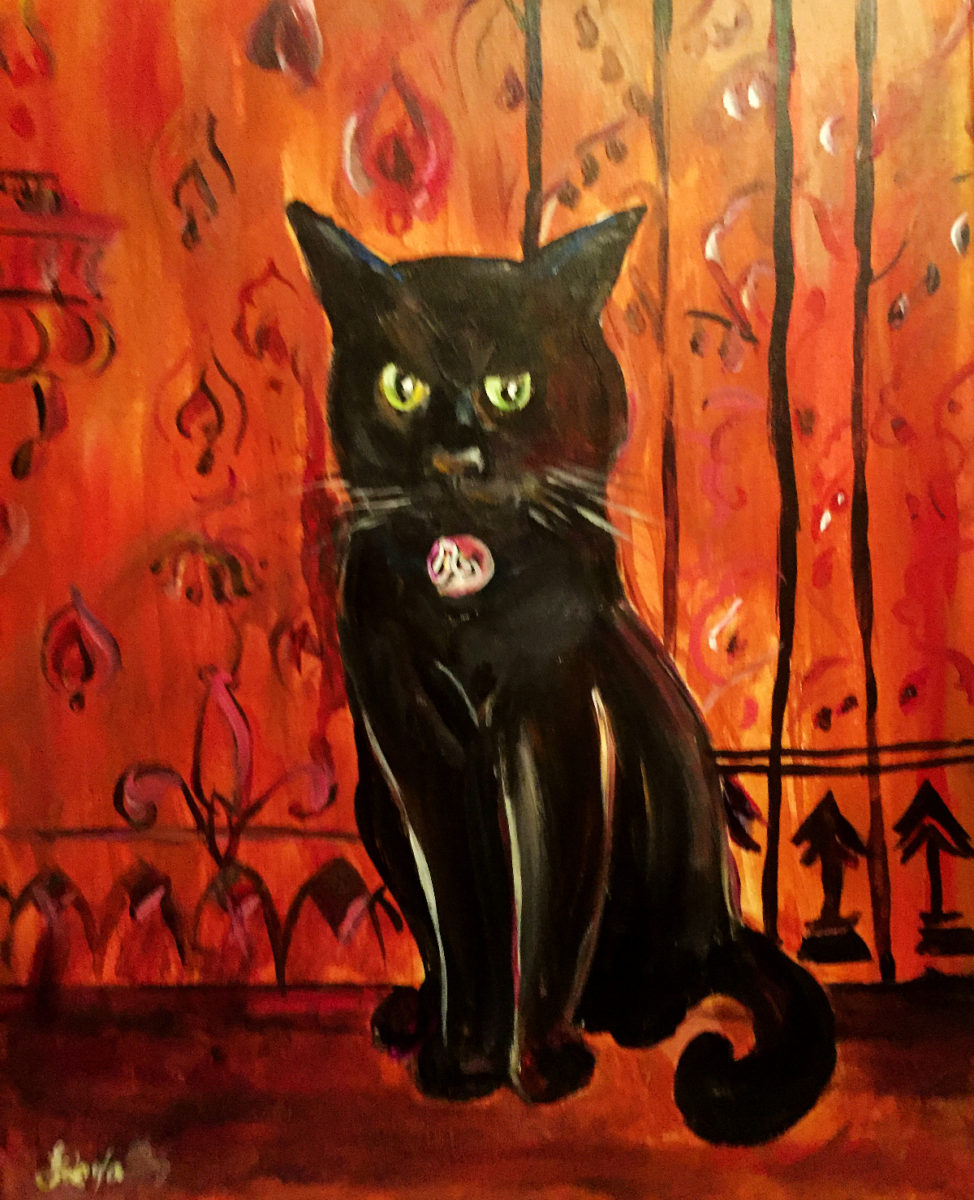 In his later years, Matisse was largely bedridden but it didn’t stop him from working. He often sat up drawing with one of his three cats between his leg like Minouche or his other black cat La Puce (the flea). 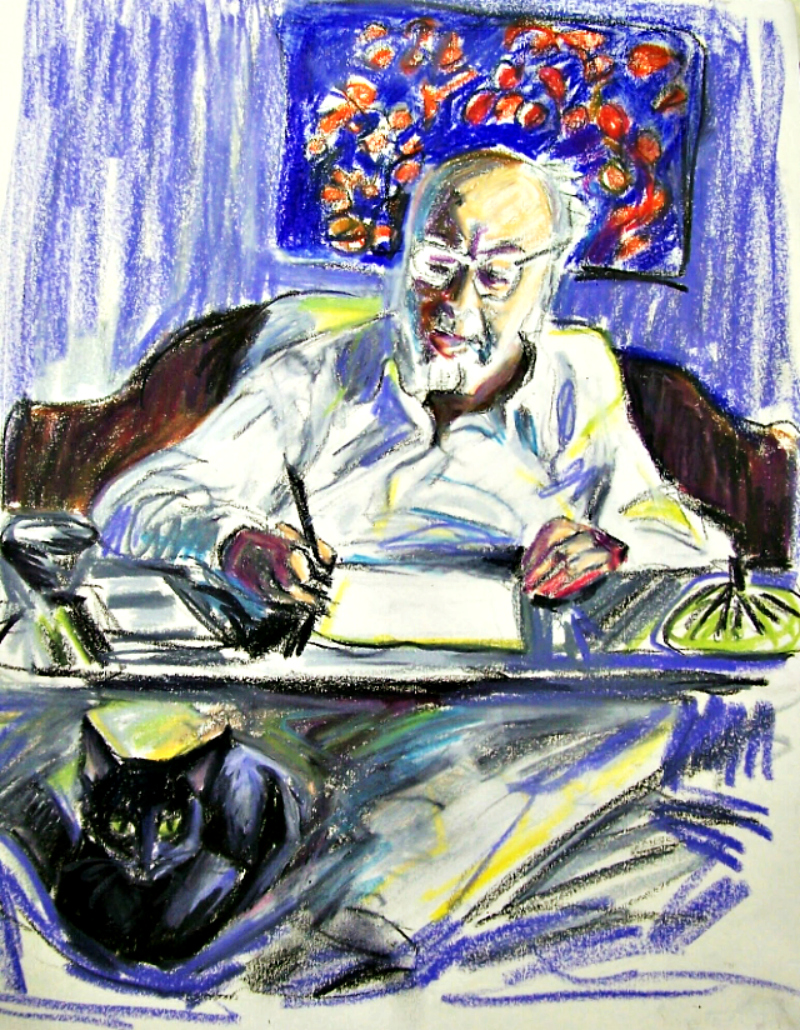 Layla admires him for continuing to create despite painful obstacles. She believes it’s better to do and keep doing. 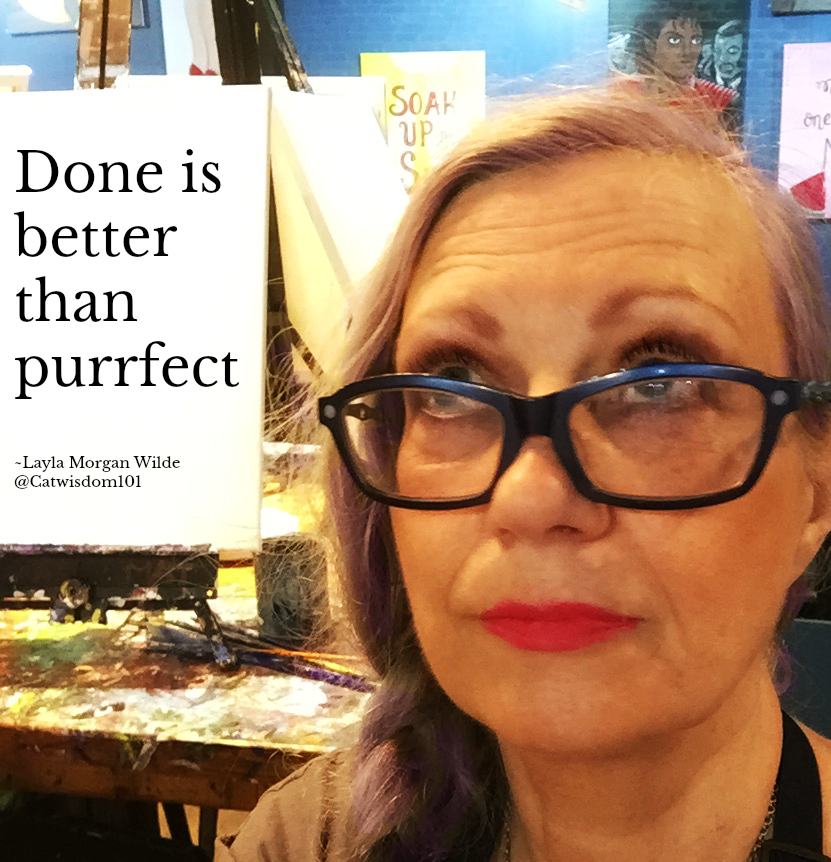 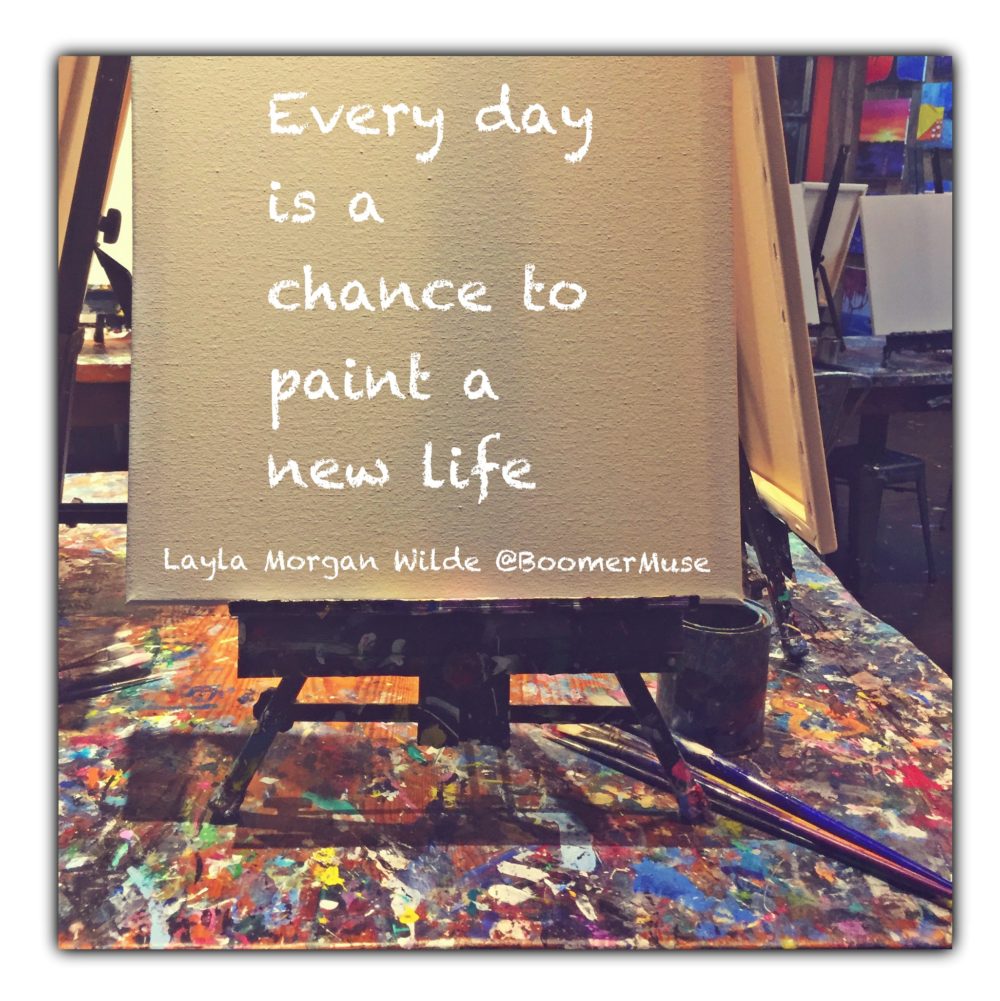 I kinda agree with Layla. It was fun to hang out with friends, try something new and revisit something old. Everything keeps changing. Who would have guessed Layla had five years of art school under her belt. Well, any skill gets rusty if you don’t use it. Outside the restrooms was a Bob Ross mural of his famous catch phrase “No mistakes, just happy accidents”.  Thanks to Bob, Layla inspired me to put together this post. I hope it inspires you. 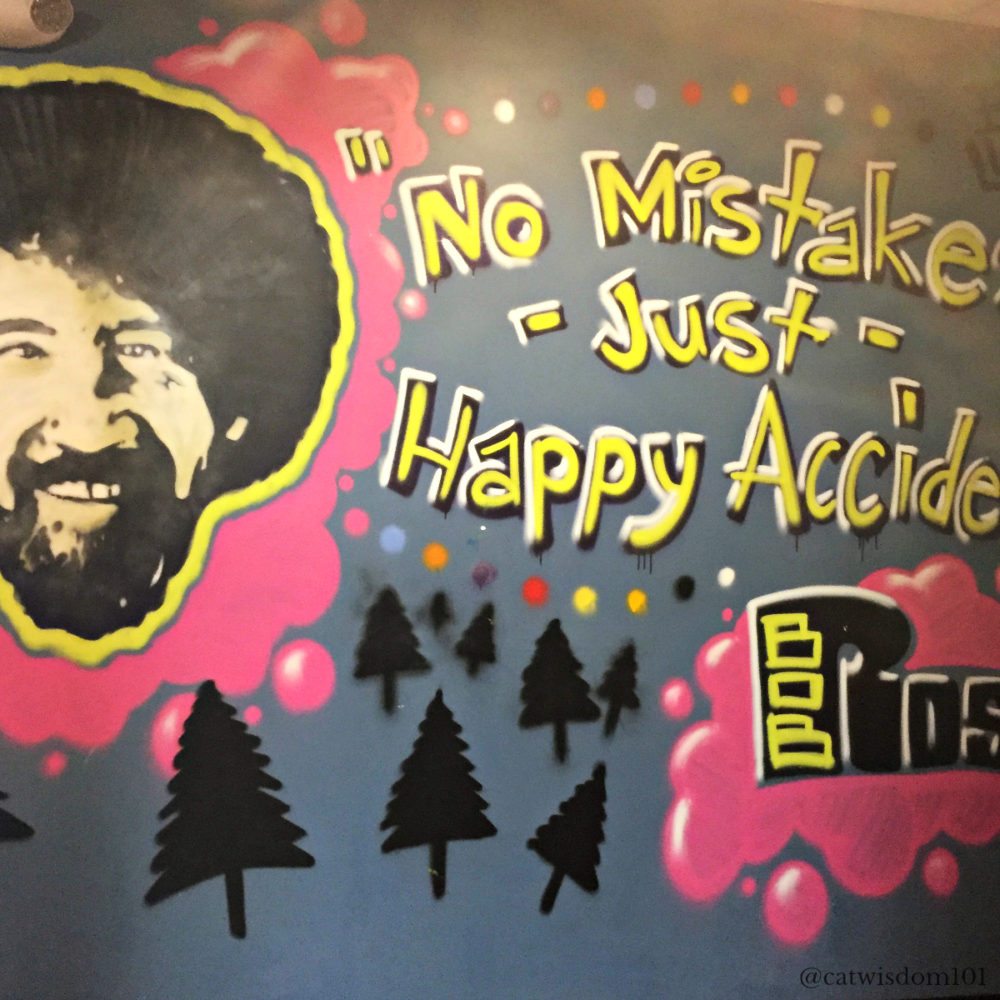 It’s been a whack-a-doo nutty times with the full moon eclipse. Did you feel it? Now with Mercury in retrograde that means there are six planets retrograde fraying tempers, slowing things down and general confusion. Save yourself some grief and don’t buy new electronics until September.  Actually don’t embark on anything new if you can avoid it. Ditto travel.  The mantra at our house is: Retrograde Relax. And don’t take anything personally.

Who is Bob Ross? Have you been catnapping? The honey-tongued painter launched on PBS in 1983 and built a strong following until his death at the age of 52. Layla used to love watching him or I should say to listen to him. He become a posthumous Internet sensation and meme but his quiet wisdom continues to shine. Millennials adore him and to no surprise the mindfulness app CALM just added Bob Ross to their soothing bedtime content. Give a listen to his calming voice and be prepared for some surprises.

Have a happy accident-free week. Look for a special post about an extraordinary cat later this week. Until then, join me and the rest of the gang send Layla your best birthday fishes. 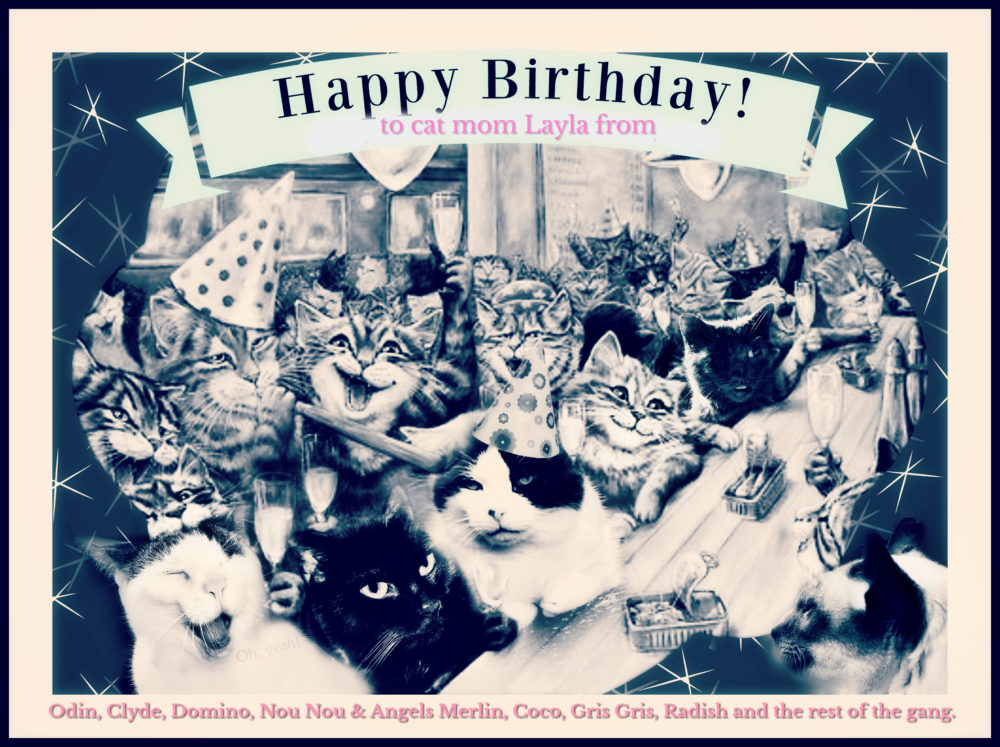