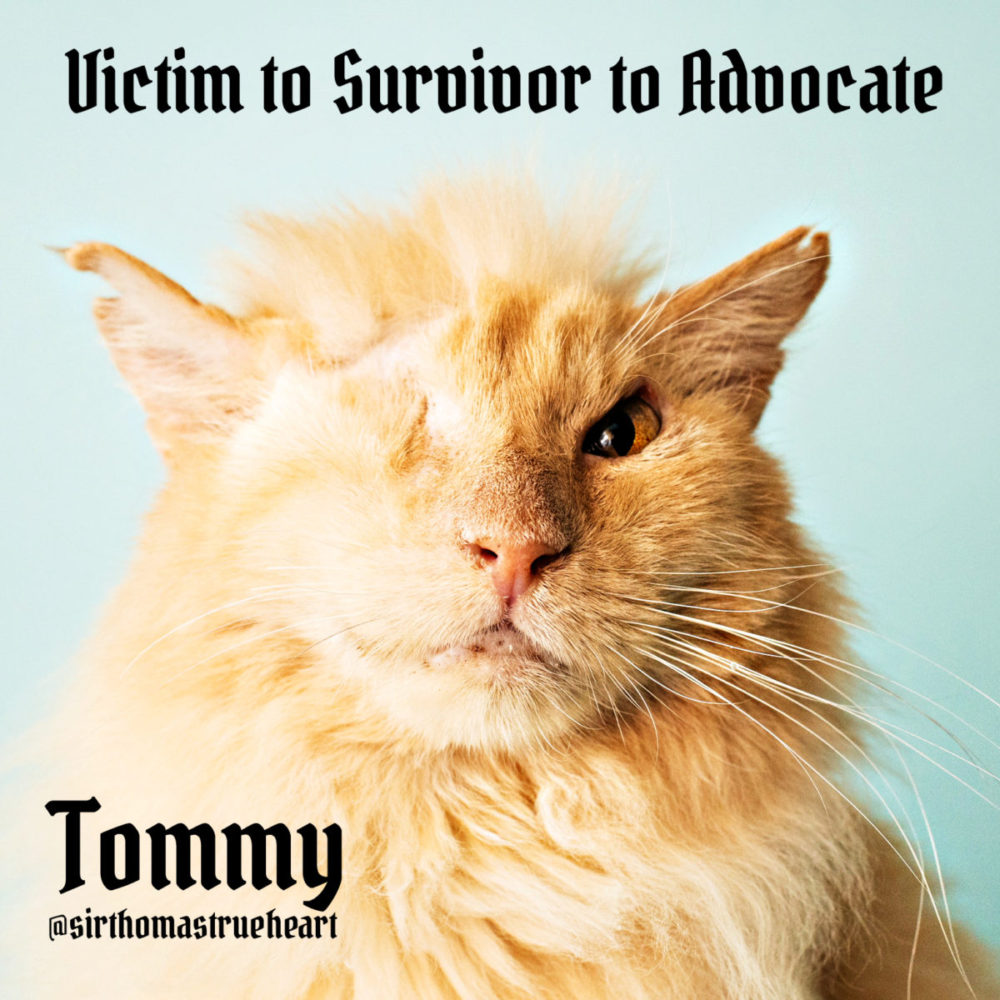 One of the most inspiring cat tales I’ve ever come across is about Tommy a.ka. Sir Thomas Trueheart. Over the past year I’ve learned the inside scoop about him from my friend Connie Cunningham. Connie volunteers at Milo’s Sanctuary the rescue organization that saved his life and she manages his Instagram account @sirthomastrueheart. Yes, the heroic larger-than-life cat, Tommy has a suitably majestic proper name: Sir Thomas Trueheart. Like many of you, I became smitten with the leonine cat with one slanted green eye who has achieved celebri-cat status. He is no pretty boy but a man cat with a cause. He’s come a long way. 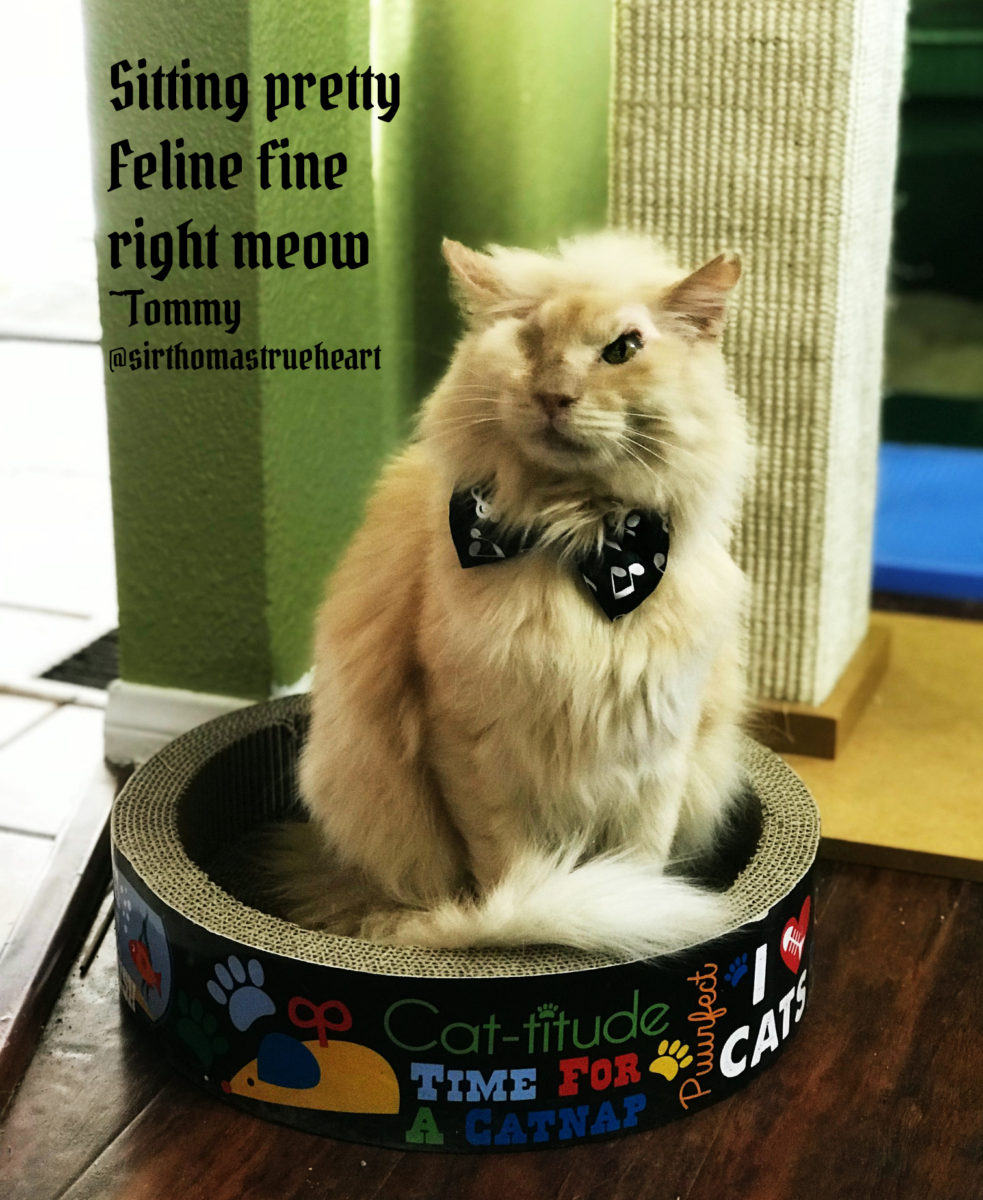 Tommy is a testament to surviving against all odds. Not only surviving but becoming a voice for the voiceless as an advocate against animal cruelty. To inspire means to motivate one create positive change and Tommy inspired me to create the graphics and taglines on a topic close to my heart: The power of love and compassion in action. 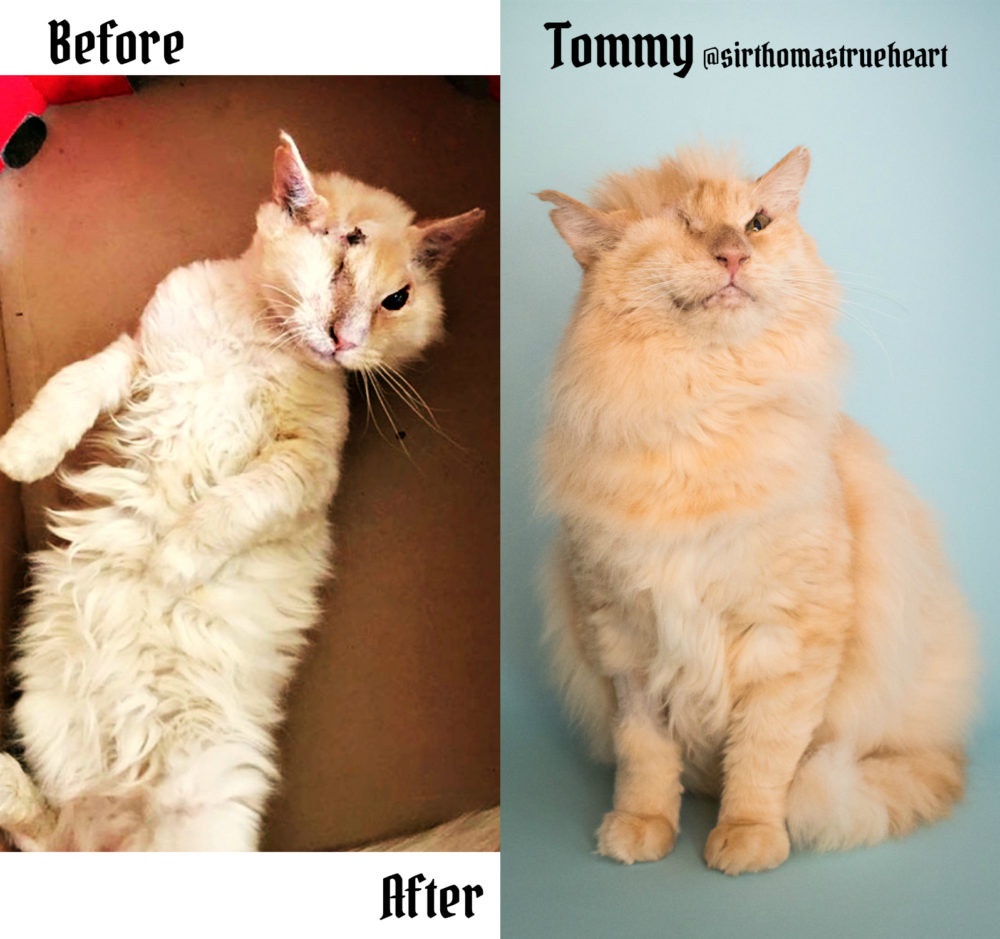 Warning: some of the images Connie sent me are graphic. I’m normally squeamish about blood but I wanted to create a narrative with the images that speaks to their power. Strong images bring up strong emotions and by facing them we are free to make new choices. As I was editing some of the images I could barely look at them but I kept at it and I’m glad I did. They speak of the sacredness of life despite ignorance, the will to live without judgement. We live in world of darkness but when we shine our light together, we can and will spread more loving kindness.

Two summers ago, Tommy lived as a stray in Southern California. He was about five years old and no one knows about his early life. He survived on the kindness of strangers. One day, in an unspeakable act of cruelty, someone poured acid on Tommy’s head. It burned through his fur and blinded his right eye. The kind folks who had fed him brought him to a vet who suggested euthanasia. They felt he could be saved and contacted the person who would become his guardian angel. 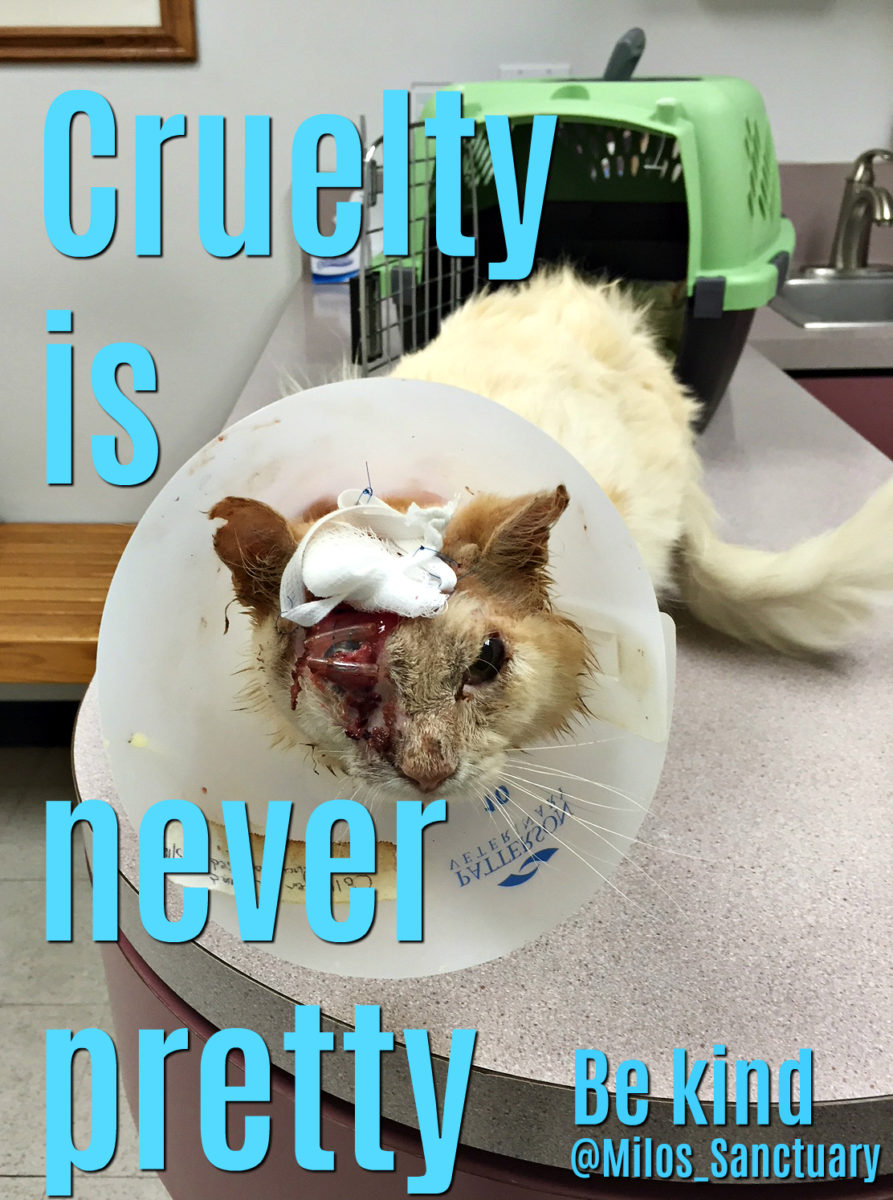 Michele Hoffman Milo’s Sanctuary founder whisked him immediately to their vet. He remained in and out intensive care for three months enduring surgery and skin grafts. His eye could not be saved and since Tommy is FIV+ he required extensive antibiotics for his compromised immune system. Every effort was made to make him comfortable from analgesics to an out-pouring of love online and in person. He also became a de-facto advocate for adopting FIV+ proving they can survive and happily co-habit with other cats. Our FIV+ cat Domino agrees. He’s is doing well at age 15. It’s time old wives’s tales be put to rest. 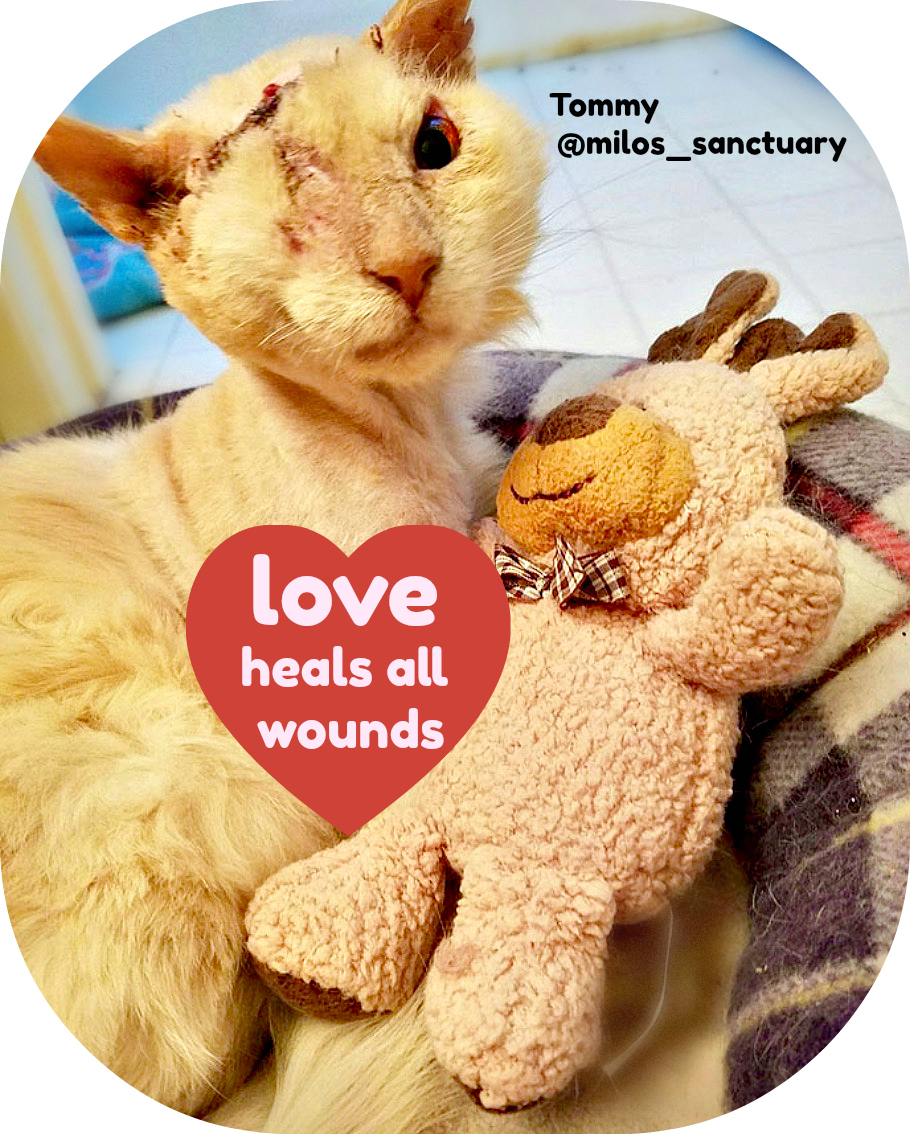 When Tommy left the vet clinic he found his forever home via the Lifetime Care Foster program at Milo’s Sanctuary. It’s where he is doted on and where everyone who meets him falls in love. He adores kids and kittens, treats and chin scritches in his domain. All cats have unique personalities but Connie says, Tommy has that special something. One of his feline admirers is a white, one-eyed gal pal named Daisy. You can keep up with all his adventures on Instagram and Facebook. He is a chill dude and not averse to dressing up on occasion. 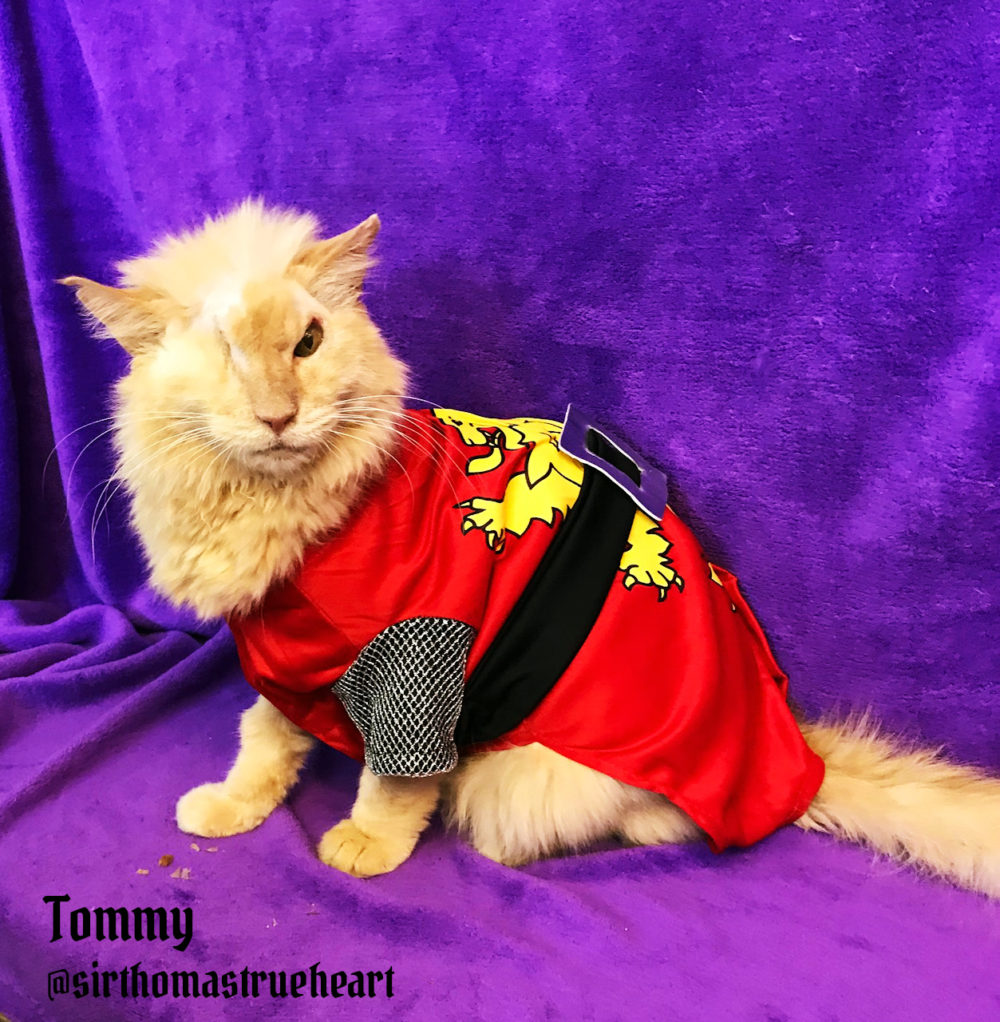 What’s remarkable is as Tommy gradually healed and acquired his distinctive new look, he fought for his life with grace and trust. It’s as if he knew he had a higher purpose. The best advocates for any cause are those who have direct experience and Tommy has it in spades. He’s matured with the quiet confidence of a wise master who know all. He knows more treats and endless love are in his future. 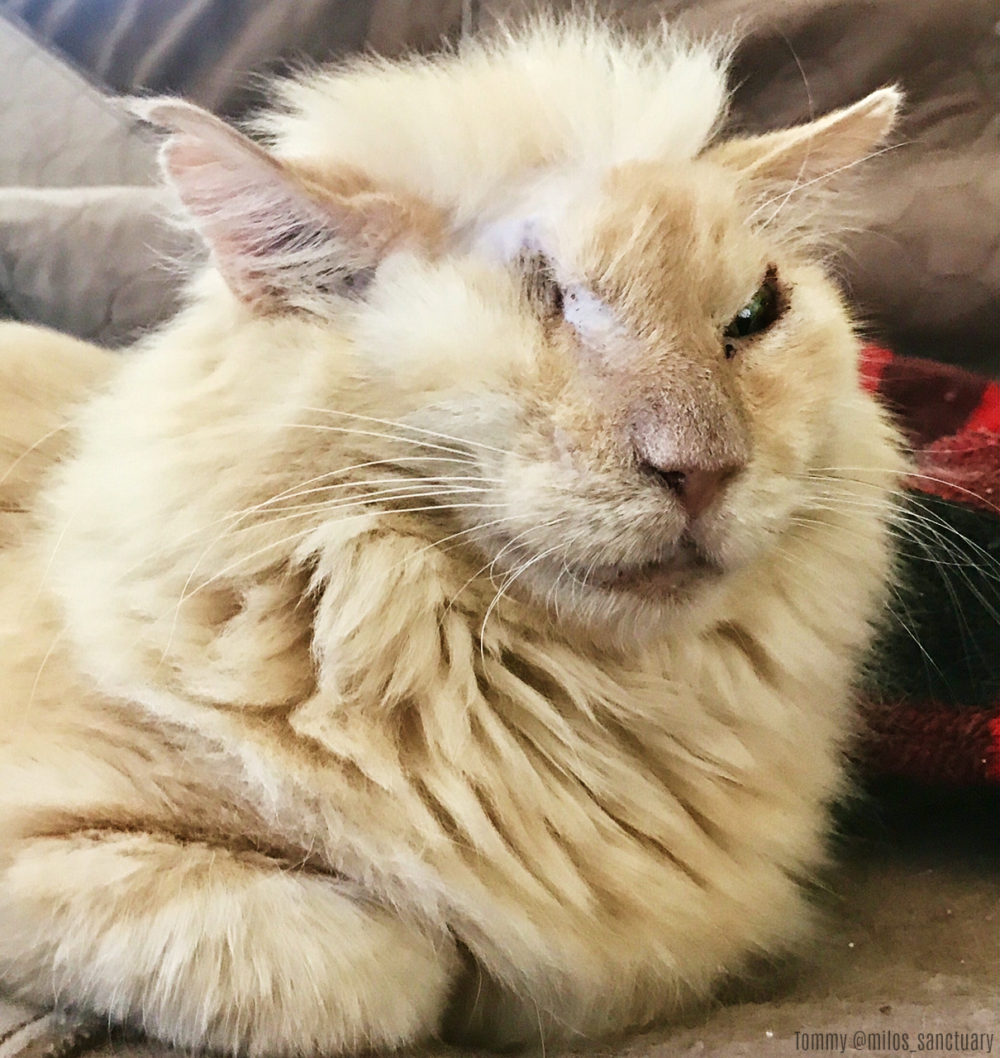 A year after Tommy’s horrific ordeal, his legions of fans continued to grow and CatCon bestowed the honor of Biggest Newcomer award. Over the past year, he’s lived up to the award by acting as a purrfect advocate for kindness and compassion, for specially disabled cats and fundraising for Milo’s Sanctuary. 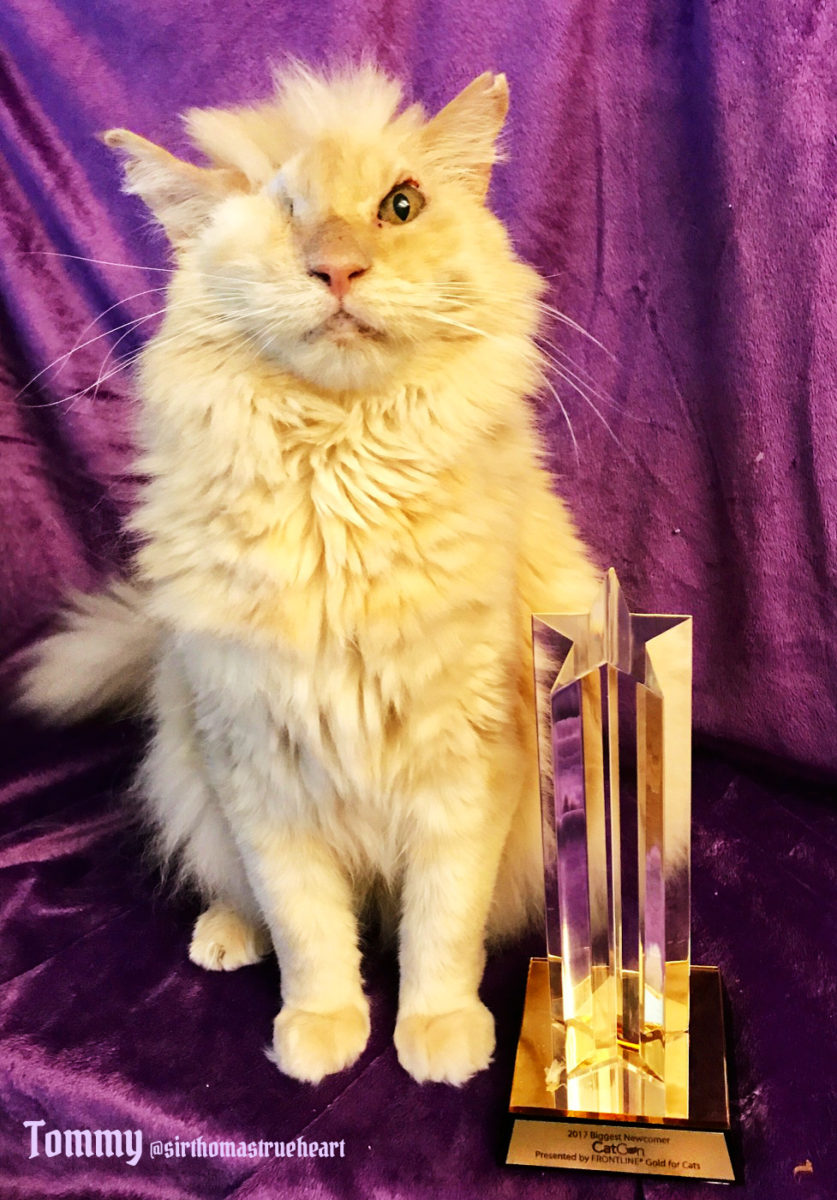 This week is all about Tommy.

The staff at the sanctuary are honoring him with “Tommy’s Week” and the highlight is the chance to meet him in person. If you are attending CatCon in Pasadena CA, there are meet and greets Saturday, August 4 (sorry, sold out) or Sunday, August 5 (hurry). There will be a panel discussion and photo ops. If you are lucky enough to get your photo taken with him, please tag us! CatCon meet-and-greet sales are not included in general admission but 50% of the proceeds will benefit Milo’s Sanctuary. I know personally how hard they work on behalf of cats in need and they deserve your support. 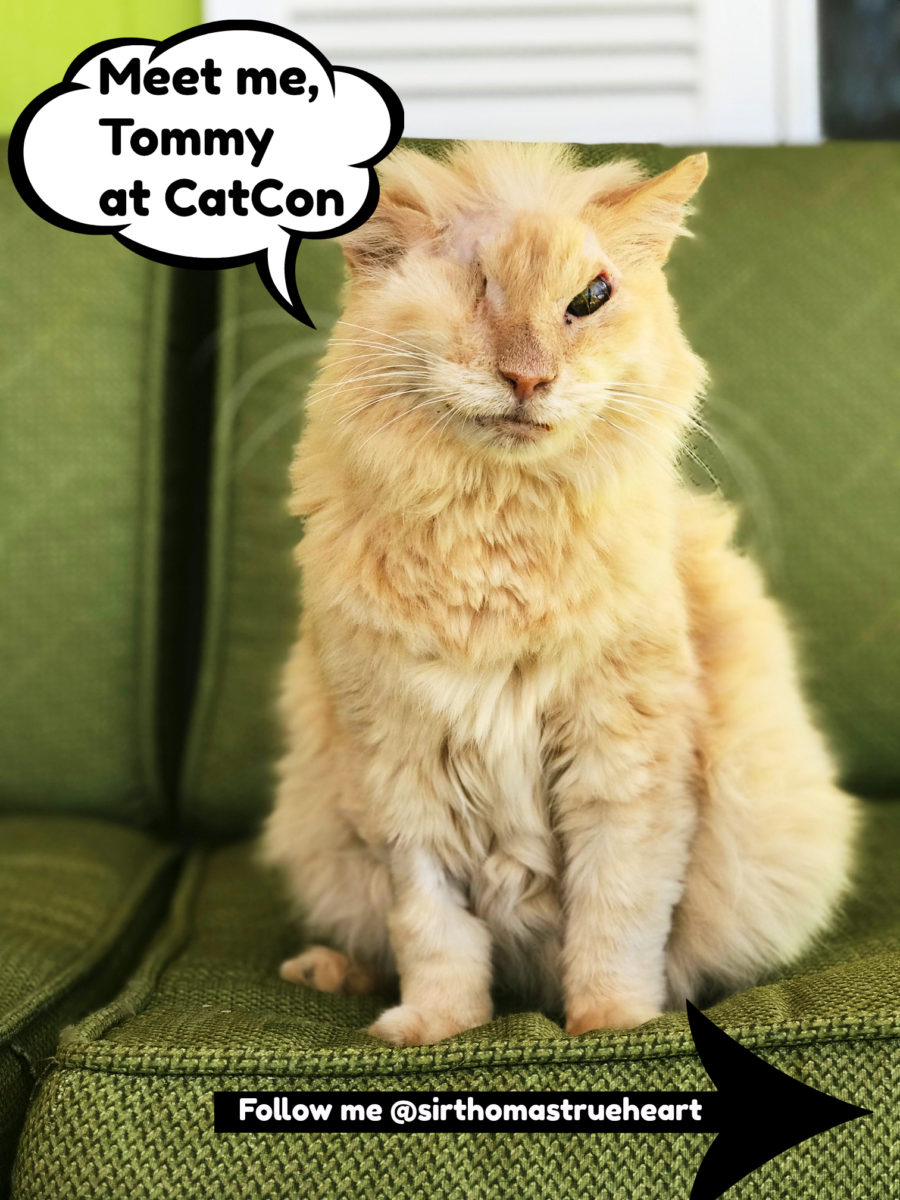 Please note: we have donated a limited collector’s edition of autographed copies of Black Cats Tell All: True Tales and Inspiring Images with bookmarks and available for sale at CatCon at Cat Cafe Lounge and 100% of sales will benefit Milo’s. Word has it, they will be pawtographed by one or more famous cats. We will update details as they develop. Until then, with your help, we can lick animal cruelty. 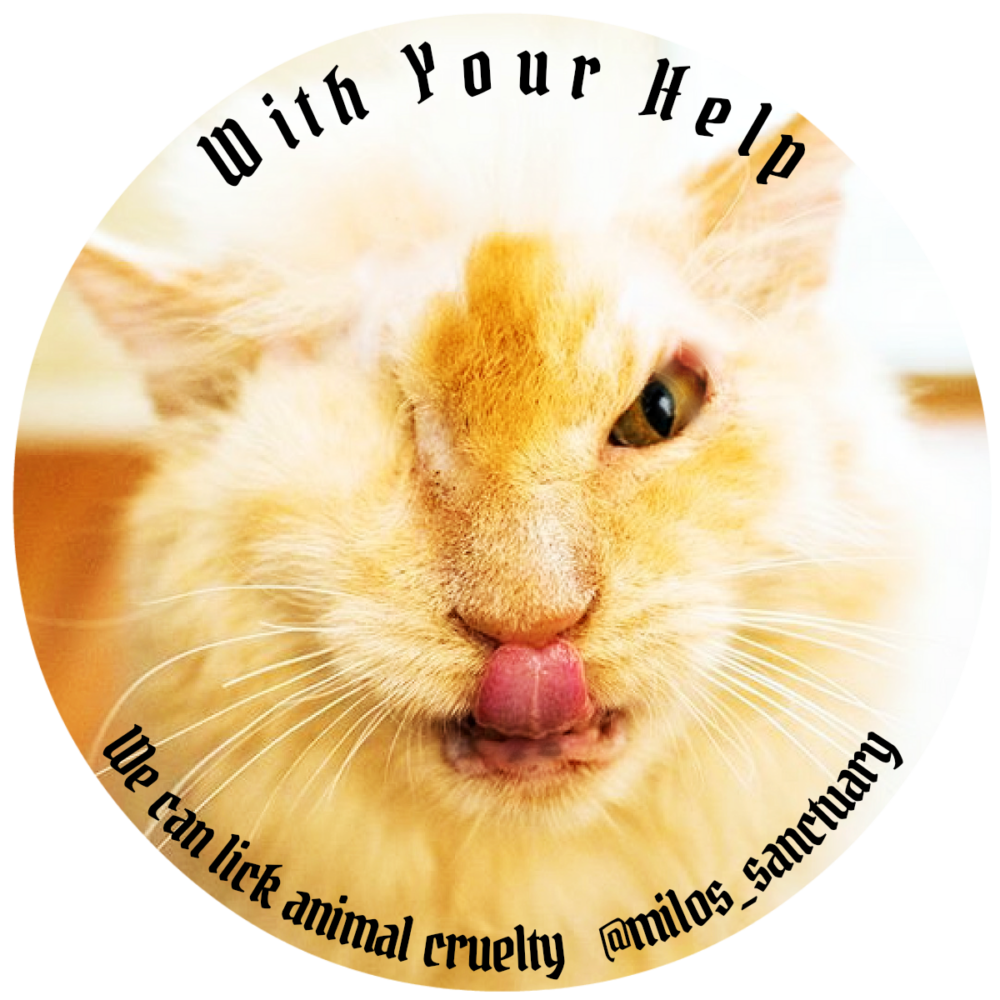 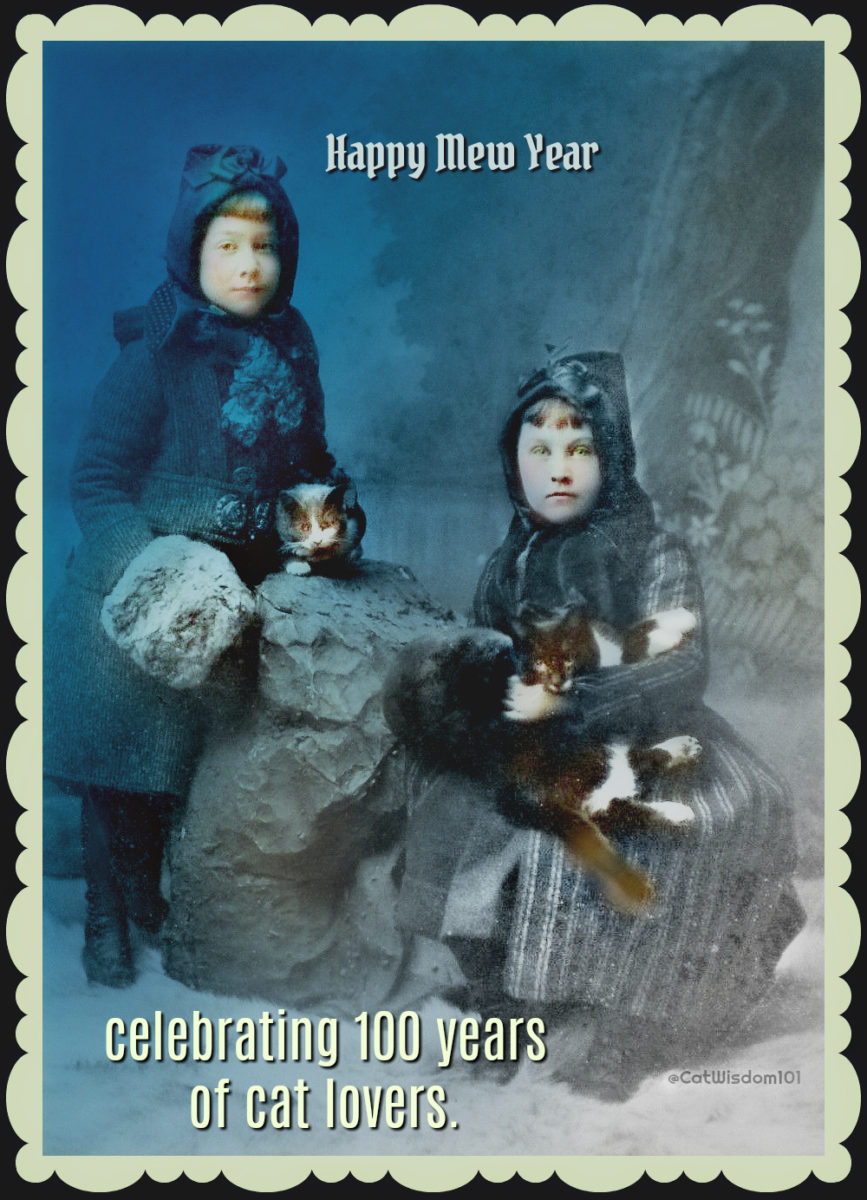