Our shelter adoption feature was going to be Abby, a beautiful Ragdoll but she was adopted in record time. No surprise there.

Cats are sources of eternal wonder and surprises. Our foster gal Nou Nou has settled in nicely and left her mark literally. She uses her litter box normally and is exceptionally neat and tidy. I thought she might enjoy testing a new automatic cleaning litter and I placed in near her regular litter box. Odin loved it. She did not (I’ll review the litter box another day). Everything was fine until I noticed paw prints on my desk, the piano and near the fireplace. At first I thought it was dust but on closer inspection, it turned out to be fine ash from the fireplace. We’d been burning more fires than usual given the cold winter and not cleaning out the ashes lately.

It didn’t take long to find the ash-loving kitty. One day I’m sitting on the sofa and I hear the tell-tale sound of a cat scratching in a litter box, except there wasn’t one nearby. I look up and there’s Nou Nou digging and scraping in the fireplace. If that wasn’t enough evidence, the scent of fresh poop confirmed it. It was time for a deeper investigation of the middening. Sure enough, she’d been using the super-sized brick litter box a few times but thankfully no pee.

For centuries people have used fireplace ashes for cat litter and they pose no hazard but this was one habit I don’t want to encourage. Until clay cat litter was commercially made and sold in 1947, cat owners made do with newspapers, sawdust or fireplace ashes but they were messy. In those days there were more indoor-outdoor cats and many did their business outdoors. These days we have so many litter choices, maybe too many.

After cleaning and using an odor neutralizer in and around the fireplace, I placed a decorative screen to block access and placed a small litter box outside. Nou Nou happily used it, as neatly as ever, but again only for poo. The next step will be to move it closer to another litter box that she likes, away from the fireplace and once she uses it, to remove the screen. At that point, I’ll probably remove the other litter. My sense is this behavior is territorial and linked to the new litter box that Odin used. It demonstrates how a small change can promote new unwanted behavior. With a cat who is territorially insecure, it’s important not rock the boat. She’s using a new cat bed on my desk that I hope will help her feel more secure. I’m also a big believer in having a variety of different litter boxes in convenient and accessible locations. We currently have seven boxes on three floors.

Has your cat ever used the fireplace as a litter box? 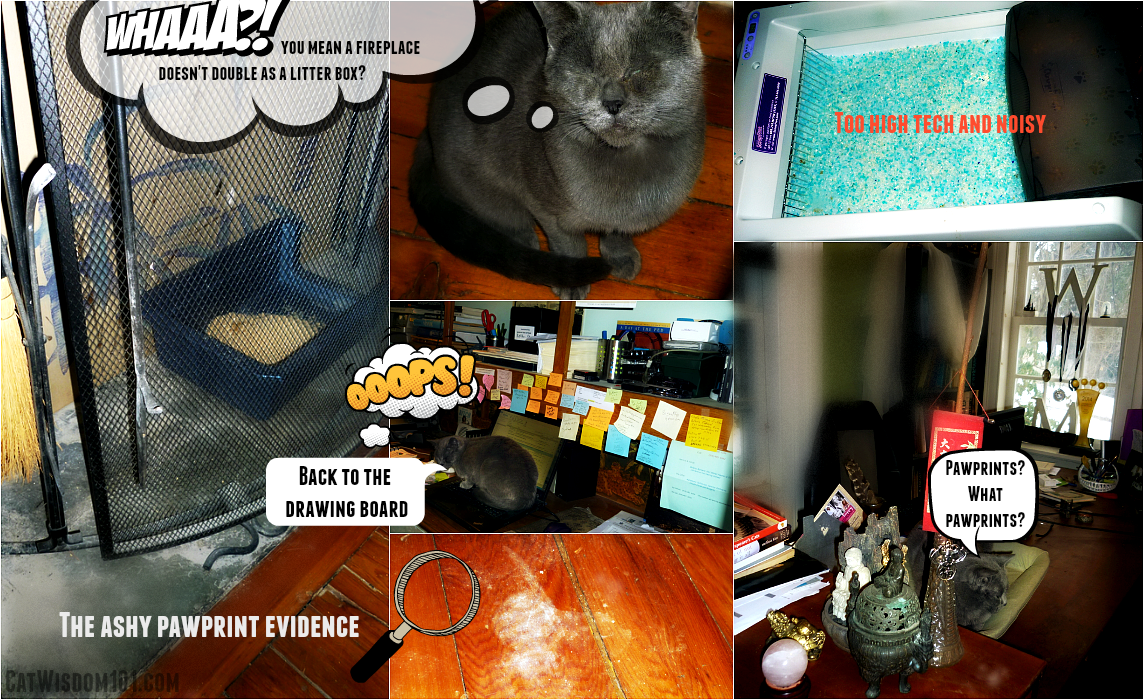 27 thoughts on “Ashes to Ashes, Cat Litter to Cat Litter”