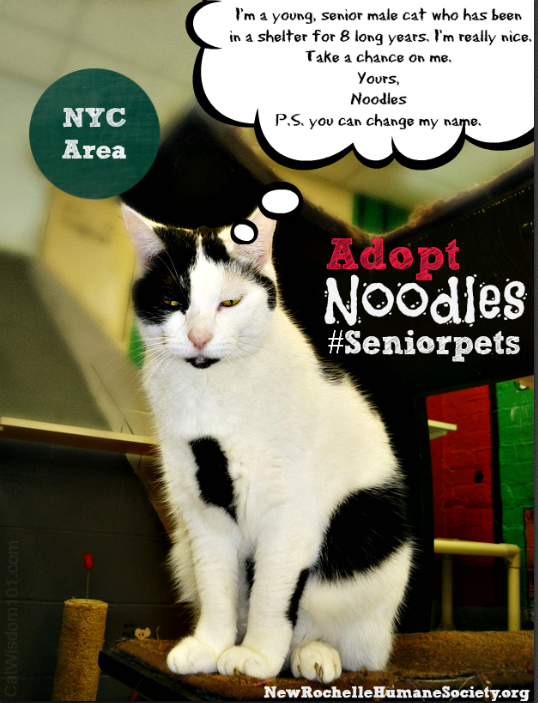 Scroll down for our weekly adoption spotlight for #seniorpets month.

The heinous killing of 25 cats in Yonkers, N.Y. last April sparked a groundswell of outrage but only part of the mystery is solved. Police arrested Rene Carcamo, 60, of 25 Overlook Terrace, Yonkers on Tuesday. Arraigned the same day, he is free on $5,000 bail and charged with illegally disposing of dead cats but not killing the cats which were found hanging from plastic garbage bags neatly tied to low lying tree branches in a vacant wooded lot at 14 Overlook Terrace. Several of the cats were killed with blunt force trauma according to investigators. The cats were in different stages of decomposition including skeletal. Carcamo told investigators he’d been disposing of dead cats for five years, both his own and those found in the area but denies killing them. It’s a mystery why he hung the bags instead of burying them. Perhaps a psychiatrist might provide deeper insights.

During the investigation, in July, the SPCA found two neglected kittens in Carcamo’s care who refused to bring them to a vet. After his arrest for illegal disposal and animal cruelty, five more neglected cats were found in his home and removed. If found guilty, the charges bring a maximum of one year in jail, a $500 fine or three years probation on the animal cruelty charges. The charge of illegal disposal brings a maximum of six months jail time. It begs the question: is this justice and where do we go from here?

When news of the killings spread, animal rights advocates, local citizens, myself included, rallied. Black Sabbath bassist and cat lover, Gerard” Geezer” Butler offered a $25,000 reward for an arrest of the cat killer. However because Carcamo is not charged with the killings, it’s not clear what will happen to the reward money. I can think of many local groups like the Cat Protection Council of Westchester and all our local shelters who could use extra funds to fight injustice. Animal cruelty never sleeps.

We love our cats here in Westchester County and most are well cared for. The Yonkers 25, as the dead cats are called, were honored in a tribute at the annual Westchester County Cat Show on the weekend. The Westchester Feline Club who produce the show decided to present the prestigious “Cat of the Year” award to the 25 slain cats posthumously. They wanted to send a clear message. Cats, all cats whether show cats or alley cats deserve respect and kindness. By honoring these cats our global community can grow in awareness of animal cruelty and make a difference in the future. Every society is shaped and defined by how we treat our animals. A memorial to the cats was displayed during the show all weekend and there are plans for a permanent memorial in Yonkers.

I believe good can and must come out of bad. The 25 cats were part of a semi-feral colony in a rundown lot. Many of the surviving cats were rescued by the SPCA in Briarcliff and are available for adoption. The city of Yonkers provided $15,000 for a trap, neuter and release program for stray cats in the city. In terms of justice, we can’t restore life to dead cats but we can lobby for stiffer penalties for animal cruelty. We can educate and be a voice for those who can’t speak. It begins in our backyard. In my backyard there is Animal Defenders in Westchester.See Humane Society where your state stands on public policies dealing with animal cruelty and fighting, pets, wildlife, equines, animals in research, and farm animals. Text RANKING to 30644 to get mobile alerts on upcoming legislation in your state. “Never doubt that a small group of thoughtful, committed people can change the world. Indeed, it is the only thing that ever has.” ~Margaret Meade

Our weekly adoption spotlight will be a short #AdorableAdoptable in honor of Adopt A Senior pet Month #Seniorpets with our Merlin as poster boy. 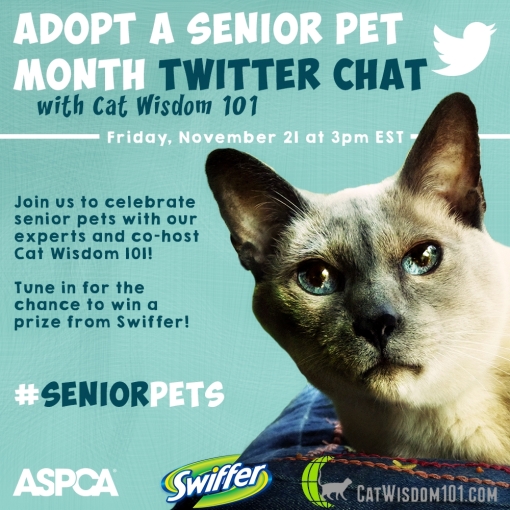 Noodles, senior boy was adopted from the New Rochelle Human Society but returned when his owner had a baby and didn’t want him anymore. He’s nine-years-young and has been at the shelter since 2006! You do the math. More info at his shareable Petfinder profile. As soon as I spotted him last week, he made a beeline off his perch for some snuggle time. He’s a friendly, healthy and dapper Tuxie who just needs a lucky break. 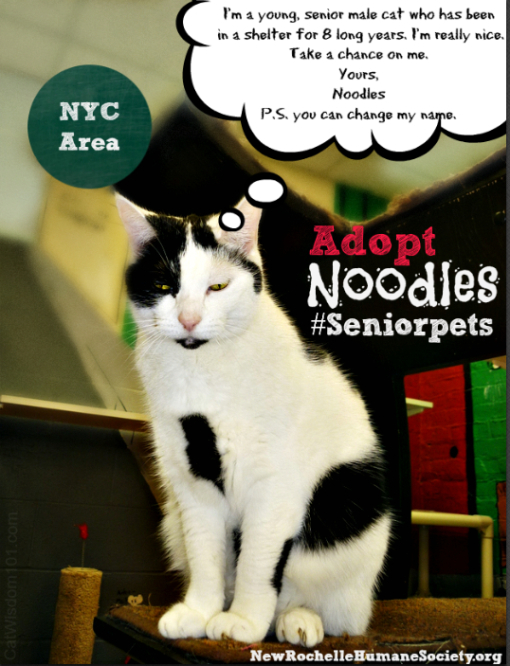 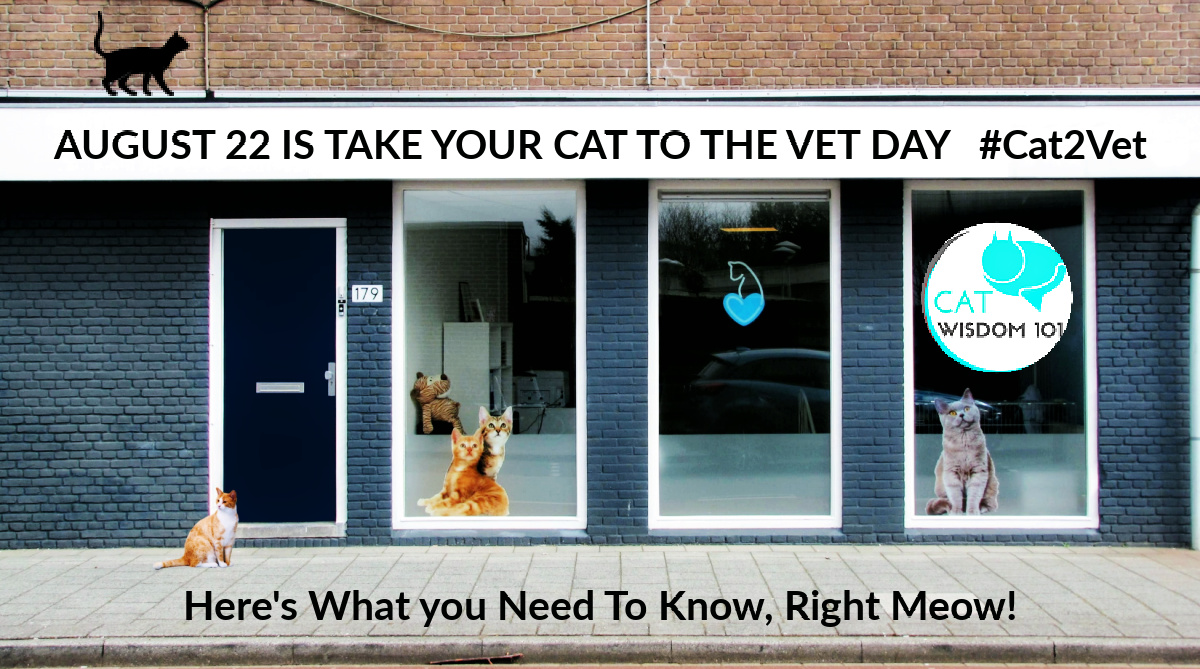 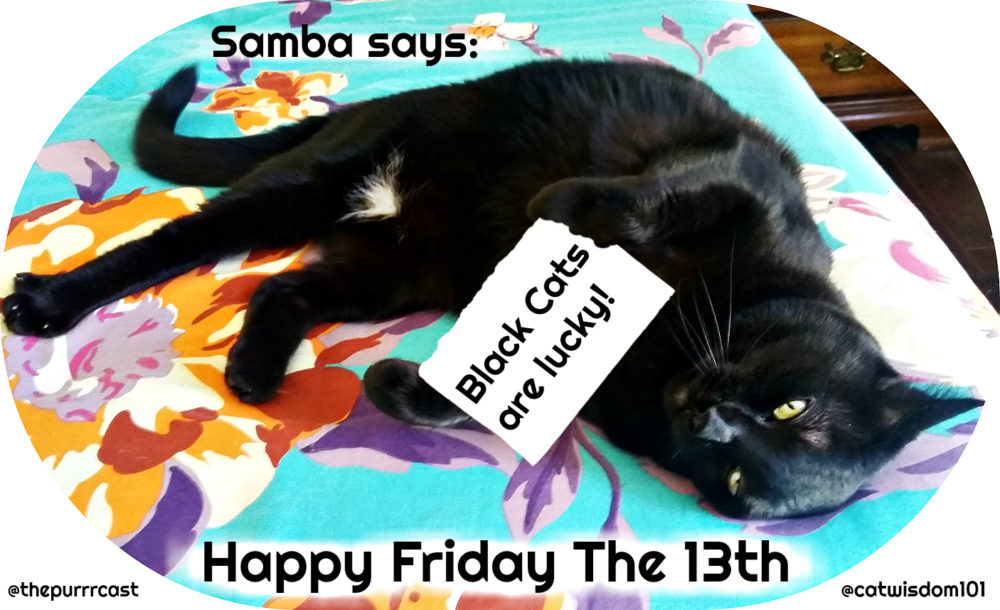 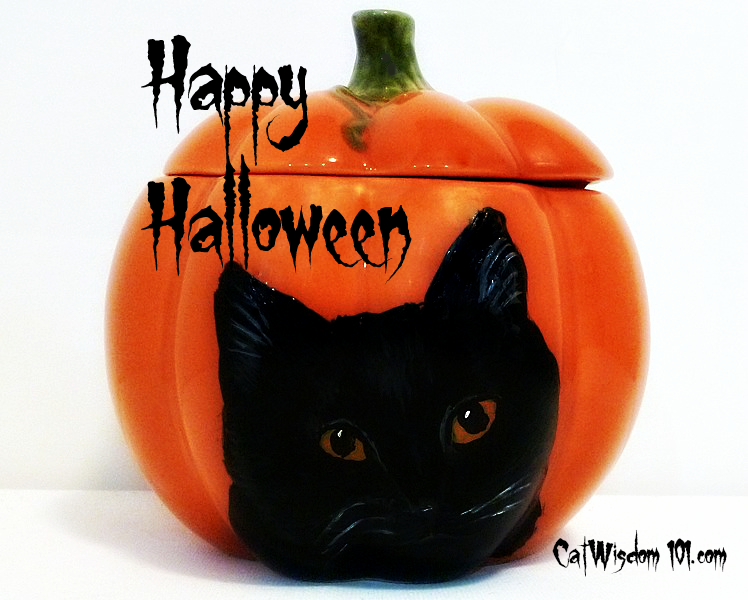