With Hurricane Irene hovering, we’ve decided to take a blog break tomorrow. We’ve battened down the hatches north of NYC and taken all precautions. But, hang on to your hats, nothing can deter our excitement. The Oscars of the pet blogging world held their awards today called the Petties at the Blogpaws conference in Virginia. Odin has this to say…

Yes, not only did The Conscious Cat win the award for Best Pet Blog, but cats made a clean sweep of the awards. And most of the winners are our pals (see our blogroll) like Catsparella who won best Social Media blog, Modern Cat who won Best Blog Design, Covered In Cat Hair won Best Cat blog, Sparkle Cat won Best Blog Article and Catladyland won Funniest Blog. We can’t stop purring!

Training cats pays off. Odin has been going off his leash to play with Domino. It’s pure ecstasy watching them prance and gambol on the lawn. There is a leap of joy all the cats make (except Merlin who is too old and blind) to show off to each other, to show their gratitude for some freedom, for the sweet smell of grass and warm summer air. They run and literally jump for joy. Odin and Domino play tag and wrestle like kittens. Sometimes they sit and commune to talk about cat things we mere humans aren’t privy to. Both were oblivious to the first sign of autumn. Can you spot it? 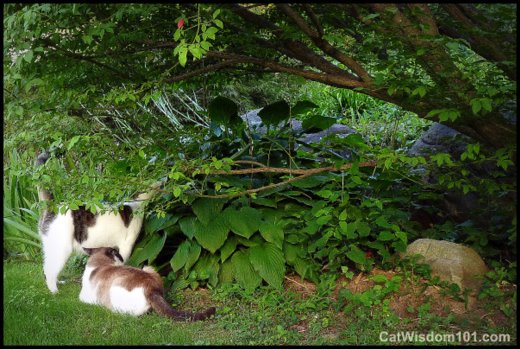 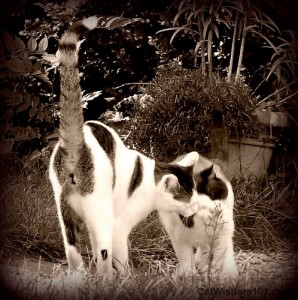 Domino and Odin adore each other. For many years, I thought Domino was destined to be a lone feral, but he just needed to find the right friend. 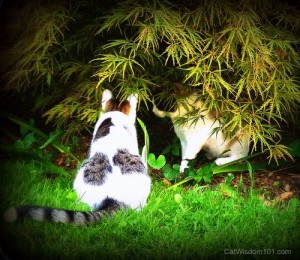 Domino’s human cat daddy is making great strides socializing him to come indoors this winter. He’s responding to daily petting, brushing and yes, for the first time in seven years, a soft rumble purr. The animosity between Domino and Gris has evaporated and while not as touchy-feely as Odin, Gris Gris likes hanging out with Domino. They often give me a look, as if to say, lady, leave us catmen alone. 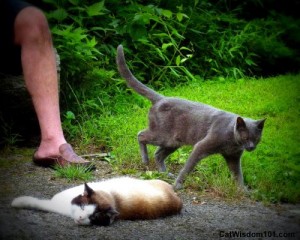 Merlin, is the only sour note in this symphony of kitty bliss. He’s happy with his daily walk and naps on the porch, but continues his territorial vendetta against foster gal Ling Ling. The Tiger Lady lashes out, full claws blazing. I tried several experiments in sleeping arrangements with varying results. I’ve tried sleeping part of the night on the third floor with Ling Ling with the door locked and part of the night with Merlin. It satisfies the snuggle requirements of both cats but leaves me torn in two.

This week, I slept for the first time all night with Ling Ling who writhed in cuddle bliss. I have to admit, she’s lovely to sleep with, but snuggle heaven came a high cost. Merlin’s cold fury cut to the bone. There is nothing worse than the otherworldly wail of an unhappy Siamese. 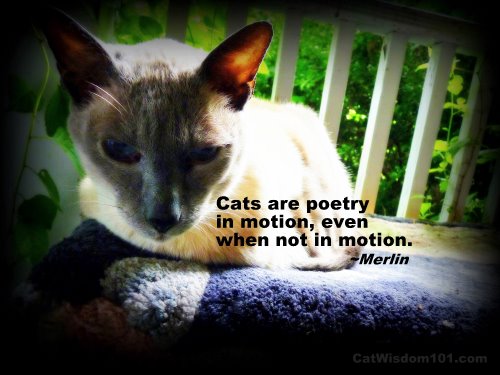 Merlin (above) still mopey on the porch. All was forgiven when I slept with him all night, but the experiments in cat wrangling will continue until everyone is happy. Purrs of gratitude for the world’s most patient husband. My dating advice to single women? Marry a cat man.

Magic, Mysteries & Pawprints On The Heart 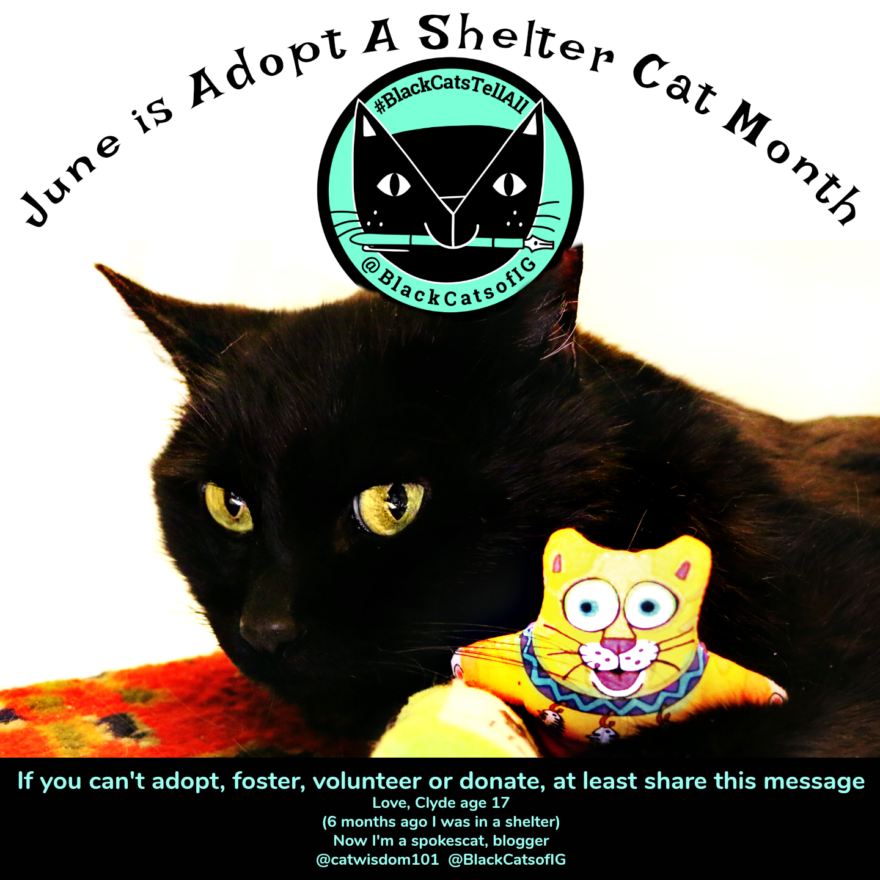