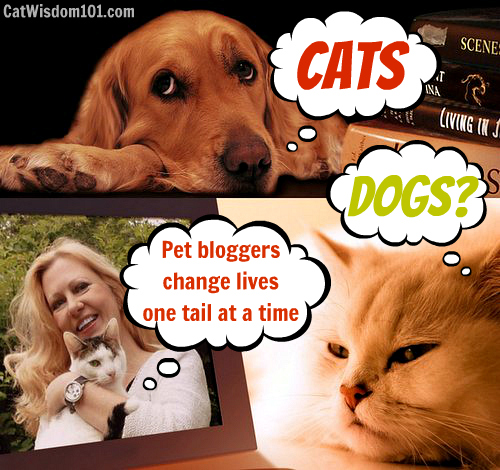 Cats make us happy and giving cool stuff away to our readers makes us happy. But there’s one other thing that would make us super happy. Read on to the end.

Pet blogging has taken the Internet by storm. There’s a conference for pet bloggers called BlogPaws in Salt Lake City June 21-23 that alas our schedule won’t permit us to attend. By a quirk of serendipity we won a BlogPaws pass from another blogger Glogirly. We’d like to pay it forward and give it to a reader who can attend. There will be lots of fun and tons of free swag. The blogger full conference ticket, valued at $199, includes: Thursday evening reception, Friday and Saturday general sessions and breakouts, meals, breaks, and sponsor exhibit areas. If you would like to go or know someone who would love to nab this pass, leave a comment with a valid email (not visible online) at this post. Be quick! We’ll announce the winner this Friday.

In other Pet Blogging news:The Petties are coming, the Petties are coming!!! Dogtimemedia.com awards Petties for excellence in pet blogs. Nominations open on Thursday and we’d love you to vote for us in a pre-Pettie contest awarding $10,000 to a non-profit 501c3 shelter like our choice, a special shelter, Brigid’s Crossing A Sanctuary With A Difference The $10,000 prize will be awarded on July 19. Nominations will be accepted until June 29 and you can vote once a day until then at the Petties Nominations Center Nominate Cat Wisdom 101 for one or more categories i.e. Best Cat Blog or Best Overall Pet Blog and nominate a non-profit 501c3 shelter or rescue group of your choice.

Winning bloggers in each of the nominated categories will win $1,000 to donate to the shelter of their choice, a lovely trophy and bragging rights. Winners be announced during an online ceremony in September.

We’ll be honest, voting is about numbers and 1) We don’t want to hound you endlessly to vote 2) We’re still pretty young and up against other cat blogs with thousands of more Facebook fans than us. So even a nomination would be awesome! But what we’d really like is for Brigid’s Crossing to win the $10,000 for the tremendous work that they do. Thank-you in for all your support!

20 thoughts on “Win a BlogPaws Pass + A Pettie Surprise”