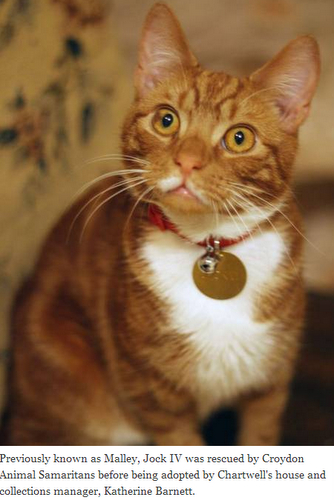 The golden kitten of the moment is Jock VI, plucked from a rescue and recently placed in his new home, Chartwell, the former country estate of Sir Winston Churchill. How did this ginger tabby kitten go from rags to riches? It had to do with Churchill’s dying wish in 1965. A life long animal lover with a soft spot for cats, Churchill received on his 88th birthday a ginger tom from his private secretary, Sir John “Jock” Colville. Churchill named the cat Jock and fell in love with the ginger cat with white paws famous for shredding furniture and rugs. The two were inseparable. If Jock dawdled at dinnertime, Churchill sent servants to find him. Dinner would not begin until Jock arrived. They slept together and Jock was allegedly there on Churchill’s death bed .Before Churchill died three years later; he stated in his will that Jock must be well cared for until death and that his legacy continue with a succession of cats named Jock. In his honor, these cats must be ginger tabbies with white paws and bibs.

Churchill and his wife Lady Churchill dining with their first ginger cat, Tango at Chartwell. This study for a painting by William Nicholson can be seen at Chartwell. 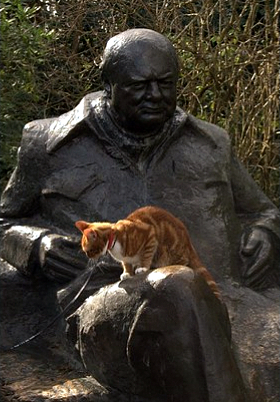 Chartwell, Churchill’s beloved home for over 40 years, become part of the National Trust after his death and remains a popular tourist destination. 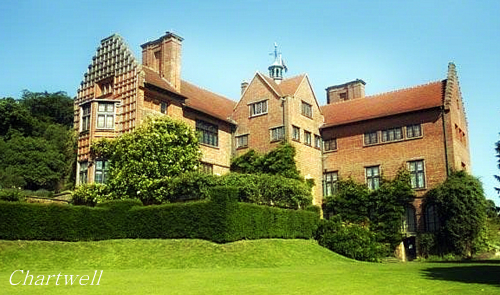 Jock lived until 1974 and is buried at a pet cemetery at Chartwell. Jock II followed in his footsteps enjoying napping by day and exploring the grounds at night. Jock III, a noted mouser and gold fish hunter was barred from the main rooms where Churchill kept his goldfish. Jock IV arrived in 2008 and die suddenly two years later. 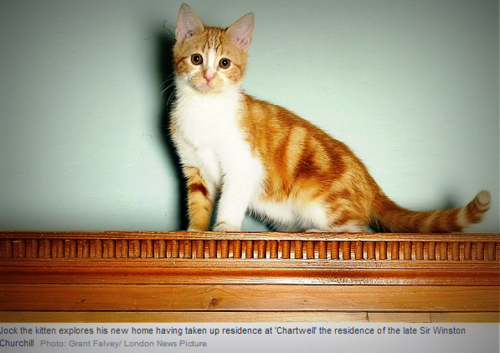 Jock V arrived in 2010 as mischievous 5 month-old kitten with a penchant for water jumping into sinks. He lived in suite of rooms on the top floor but like all the Jocks had access to the gardens via a green, cat flap door approved by the Historic Building Inspector. Alice Martin, the previous House and Collections manager bonded deeply with Jock and adopted him. They now reside the countryside of Scotland. 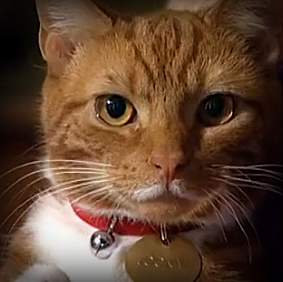 Jock VI, with requisite white paws and bib plus an adorable milk mustache

The latest Jock, lucky number VI is a seven-month old kitten adopted by the current House and Collections manager, Katherine Barnett from a local rescue, Croydon Animal Samaritans where he was taken in as a stray and named Malley. Jock is taking his rags-to-riches good fortune in stride. He’s enjoying catnaps, tuna and lolling on Persian rugs as to the manor born. Churchill  once said: A day away from Chartwell is a day wasted. Chartwell is located in Westerham, Kent U.K. and about 25 miles south west of London. Weather permitting, you might catch find Jock in the garden.

Jock got lucky but it is kitten season and that means shelters everywhere are in desperate need of finding homes. Visit Petfinders.com and consider making your own rags-to-riches story.