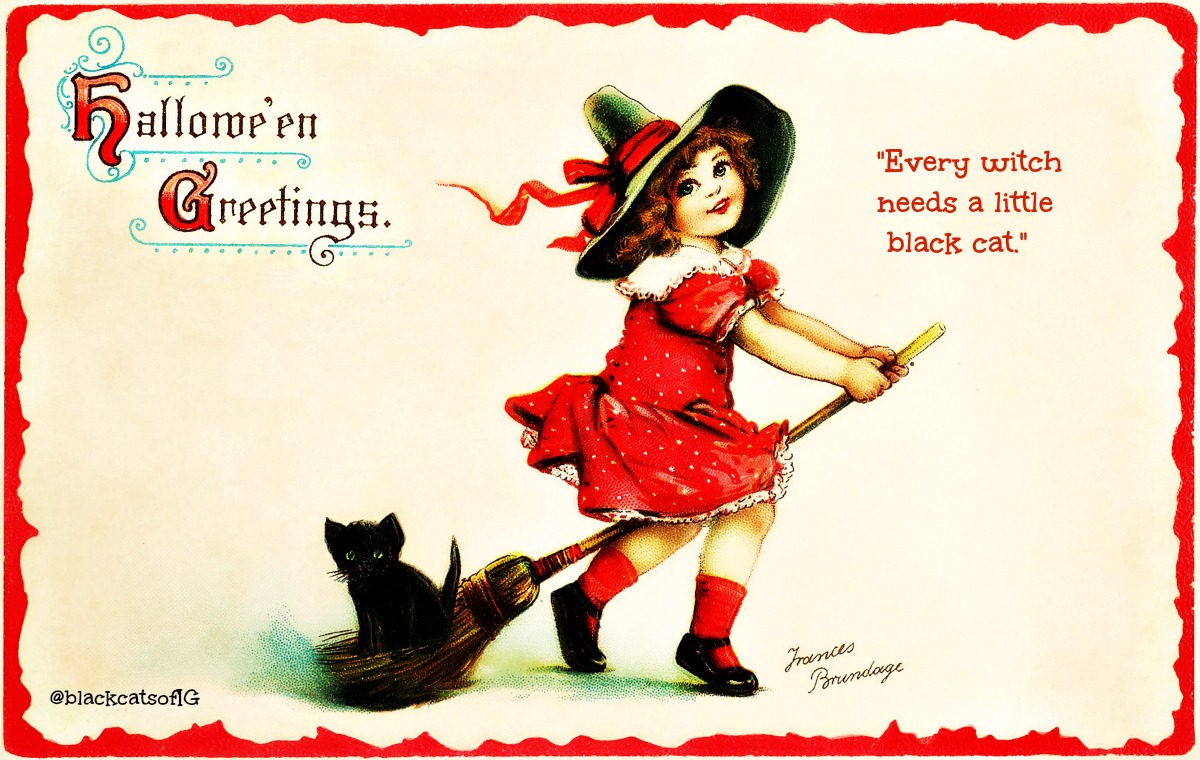 In the spirit of Halloween looming and under a full moon, what better time to explore black cats and witches? We turn the clock back to the ’80s, ’20s and 1880s and witches when their furry black familiars ruled. The styles of art have drastically changed but it’s easier for me to curate positive images of black cats since I began advocating for them.

Witches are having a full circle moment and yet no major brand has taken the leap into the broom closet. In 1982, Ronrico Rum came out with the rumkin, a pumpkin based cocktail. It’s a cute name and ripe for a revival. Not to mention with books like Witches, Sluts and Feminists, witches are being depicted as anything but ugly, old hags. Witches like every recent year is a top choice for Halloween costumes.

Rumkin is an archaic word for drinking vessel and Romrico Rumkin is a trademarked but they only got around to it in 1992. Hello, Ronrico, it’s time to revamp this campaign. It’s a purrfect Halloween party cocktail. 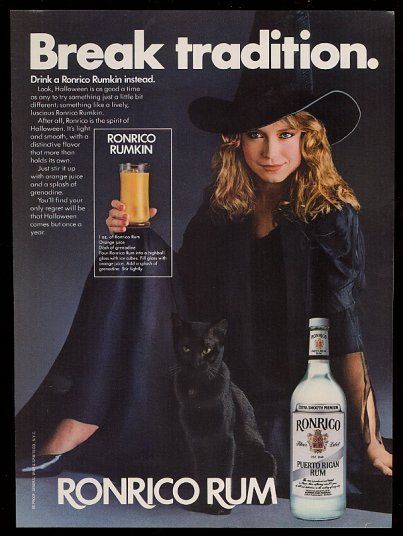 Back in the 1920s, the traditional hag witch morphed into a glamor puss from Ipswich Hosiery. Founded in 1868 in Ipswich, Mass. it become the largest hosiery company in the U.S. but vanished once hosiery fell out of favor for bare legs and pantyhose. The company logo was hag witch on a broom. It’s not clear whether it’s meant to honor Mary Perkins who settled in settled in Ipswich in 1615 and accused of witchcraft. She managed to evade execution after being tried and sentenced to hang in Salem and lived until 1700. 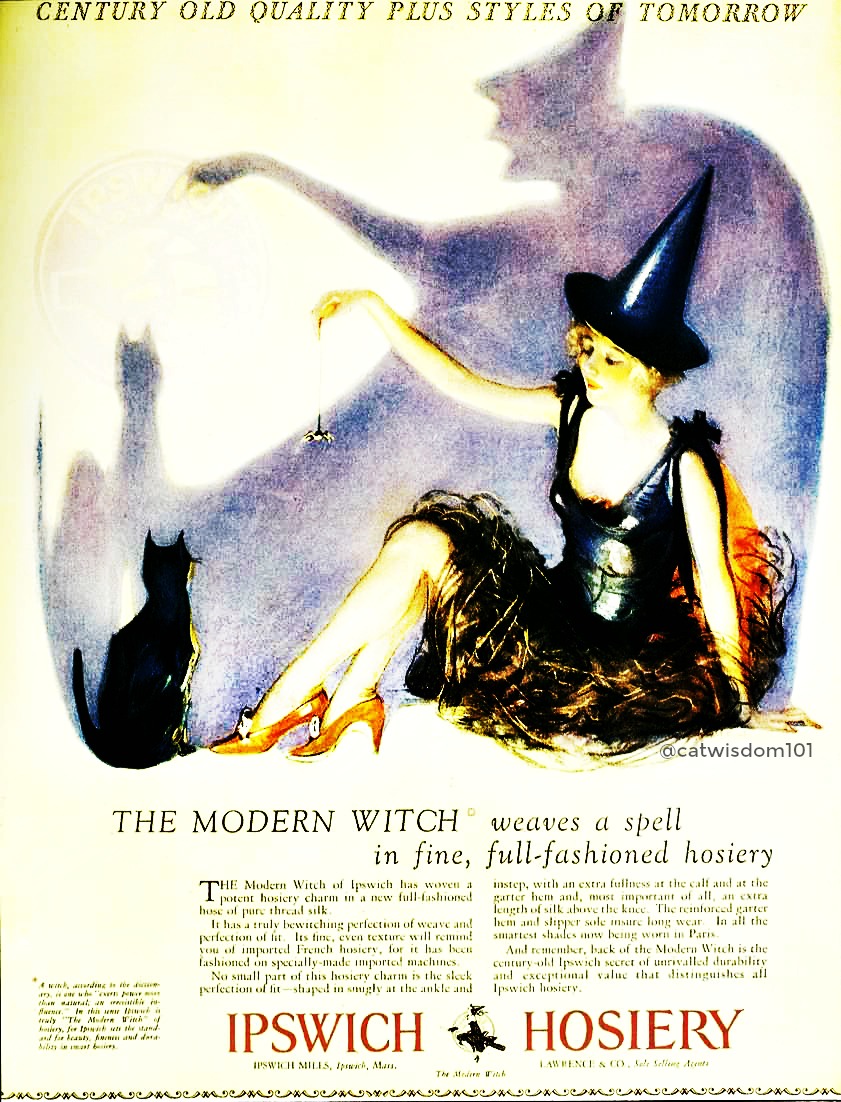 A shift from hags to attractive younger women began during Victorian illustrations, cards, and advertising. In 20s to the 40s, the concept of pretty witches abounded but still tinged with danger. 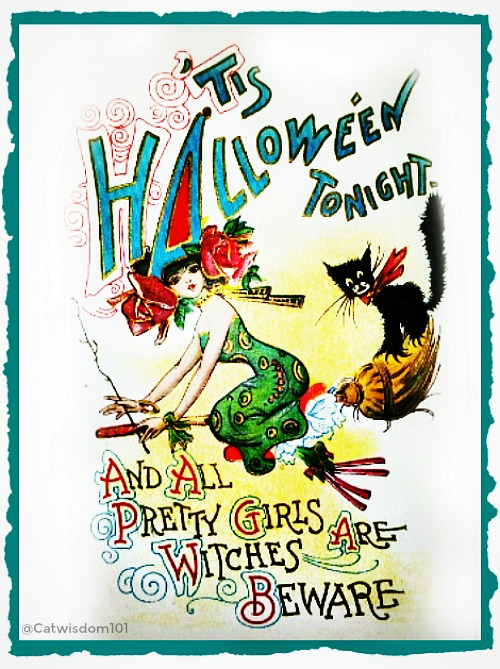 The full moon looks far more malevolent than the witch or her slightly goofy familiar feline. 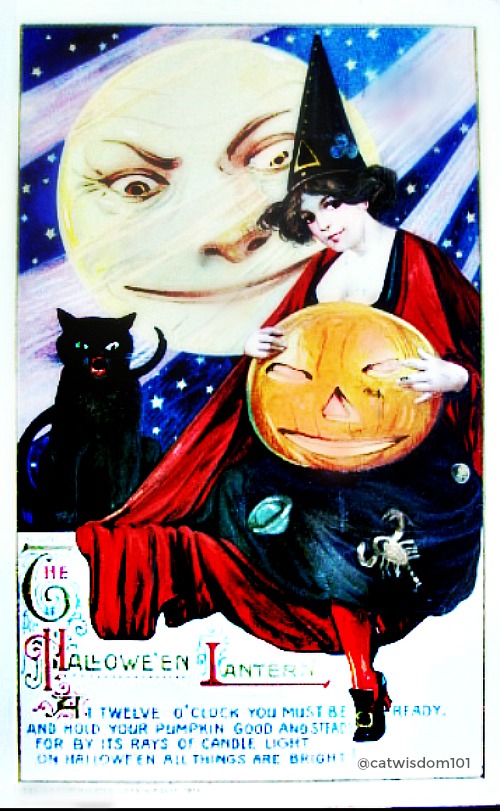 Halloween postcards since Victorian day were popular and cheaper to mail than regular greeting cards. They often has rhyming poems in a pre-Hallmark kind cuteness with witchy spells. 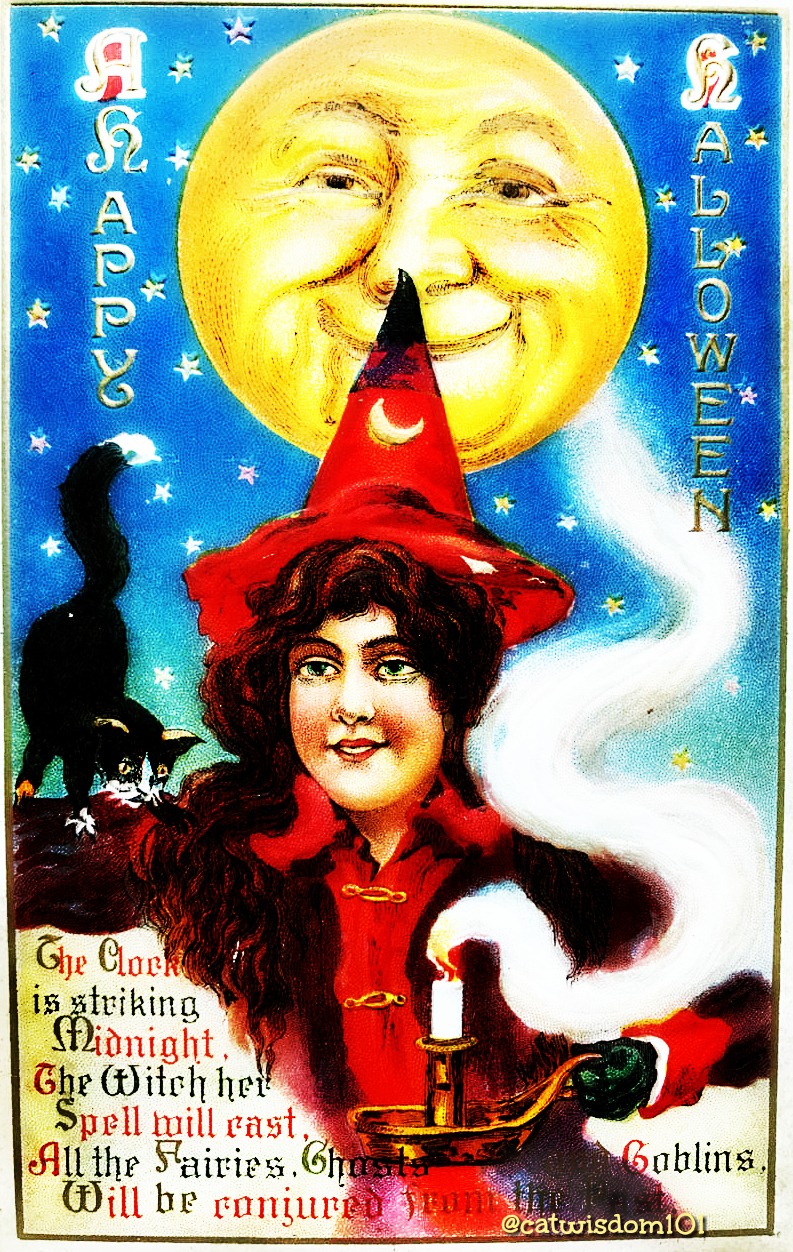 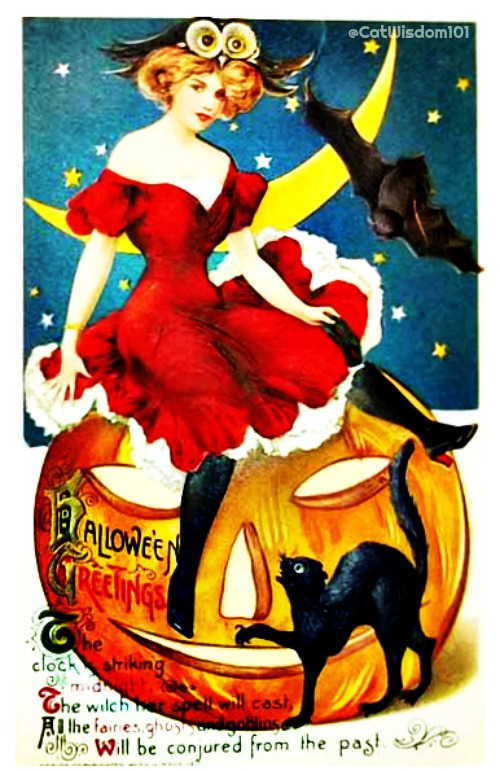 Ones of the most prolific postcard and book illustrator was Frances Brundage. Her distinctly charming imagery graced a body of work over 60 years and hundreds of books.  I repaired this badly damaged postcard. Brundage could even make an old hag adorable. For all her sweetness and famous cute kids or Valentines, belies a sadness. Her husband and her only child or 17 months pre-deceased her. 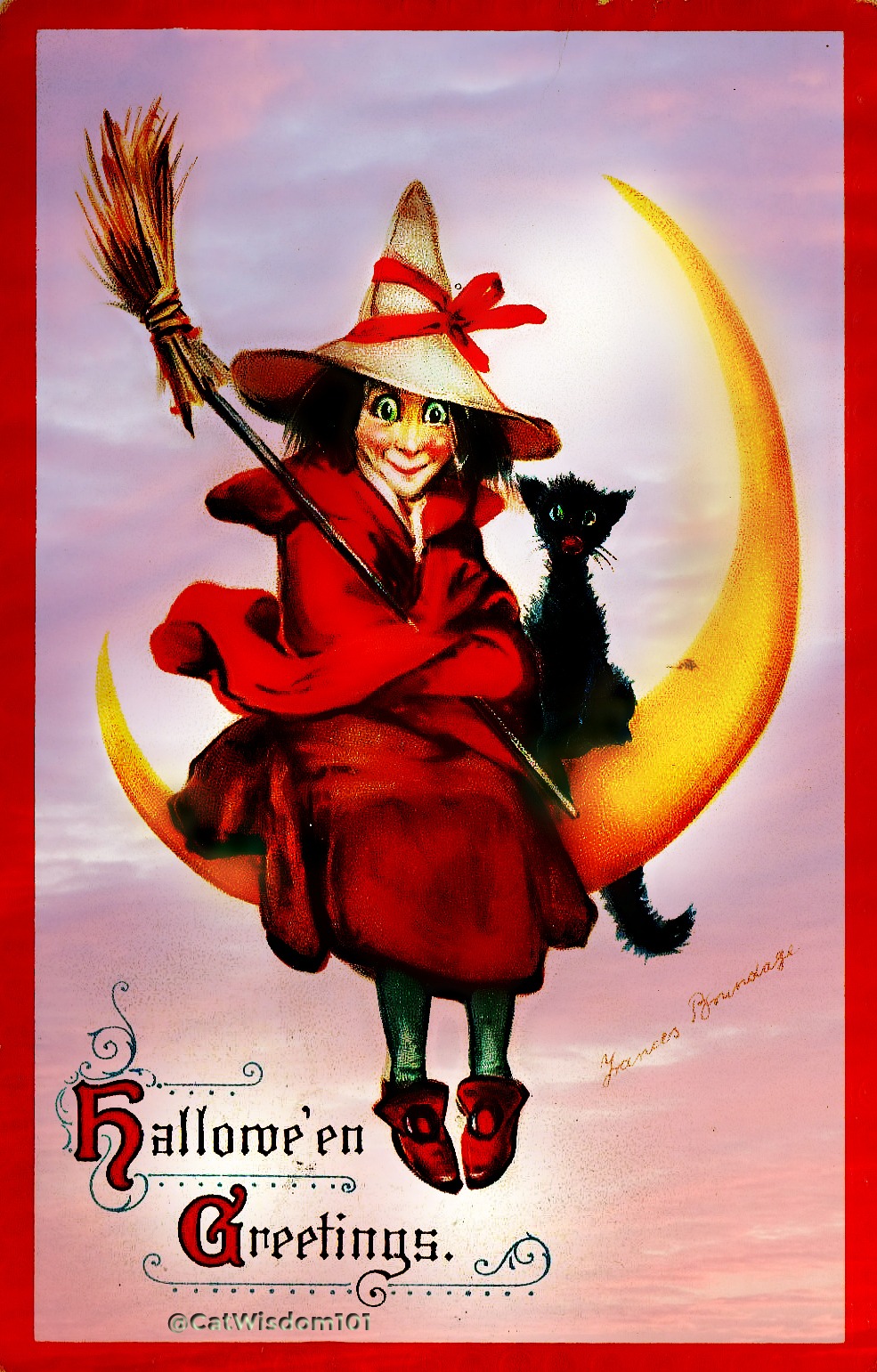 One of my favorite turn of the century illustrators is Arthur Rackham and his prolific work is in the public domain. I colorized this etching which I’m calling A Traffic Jam Of Witches. Cats are usually trailing behind on broomsticks but these are leading the charge. What’s interesting about the gaggle of witches is their variety. There are a couple of hags, a pretty young with and a male witch. That sounds relatively egalitarian for its day. 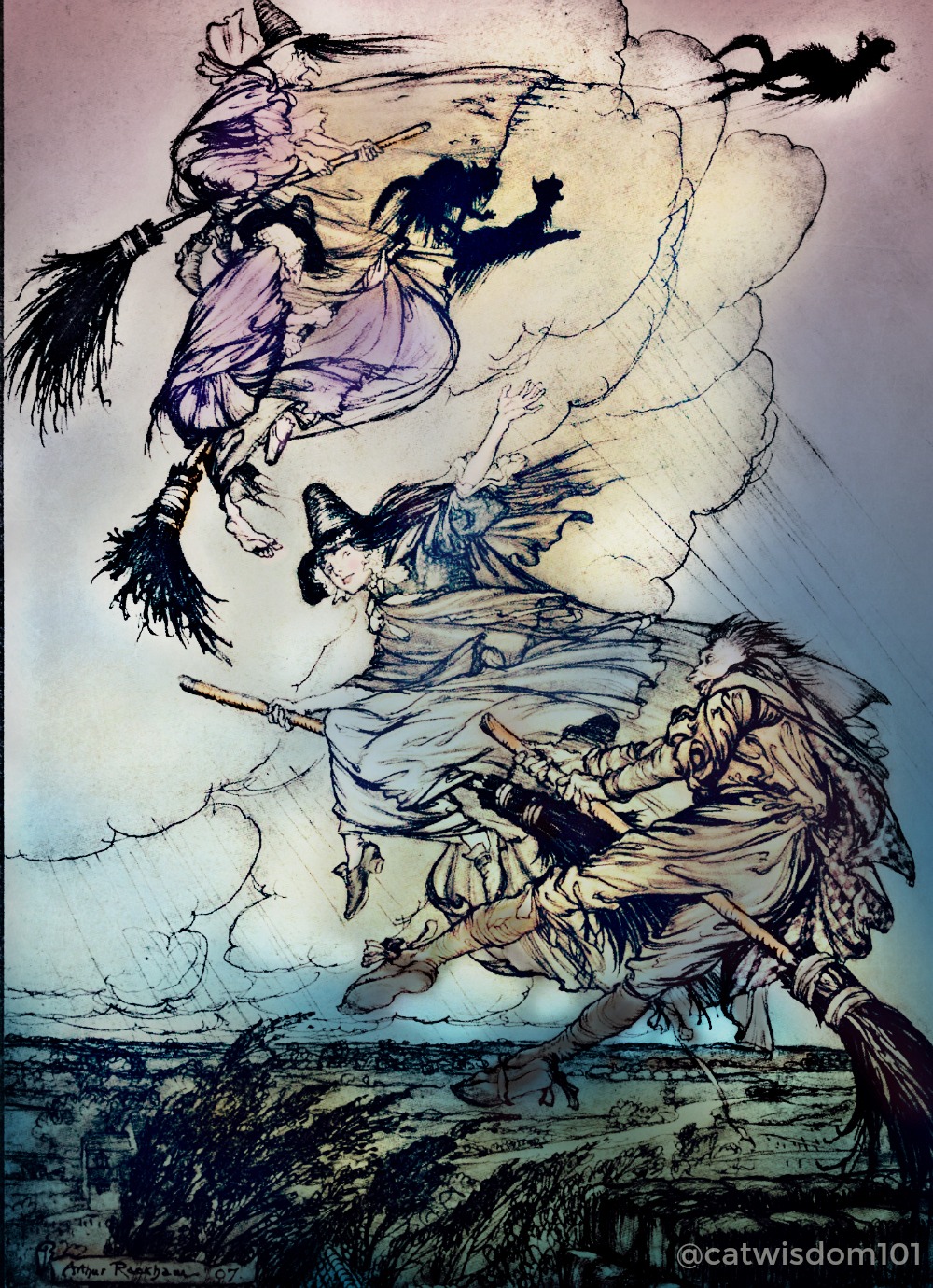 The cutest witch cards are little girls with their cats and no one one illustrated them better than Brundage. Witches are now widely depicted in all three stages or ages: Maiden, Mother and Crone with traditional names real witches use. Maiden is for young witches before puberty. Mother is full witches of child-bearing age and is usually depicted in pop culture as attractive and sexy. Crone is the older post-menopausal, non-sexual hag witch. She may be wizened and wise but could use a rebrand! 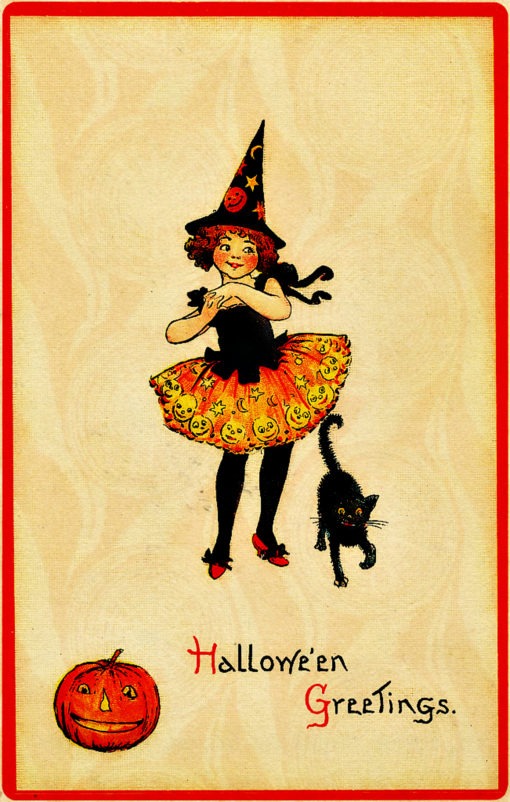