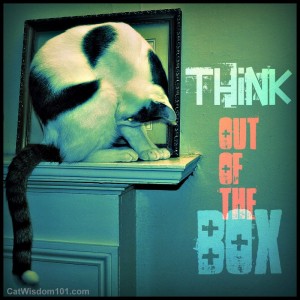 Cats like squeezing themselves into pretzel shapes and tiny spaces, except one: their litter box. If your cat is growing, change the size as needed. Large breed cats like Maine Coons need an extra large box. Think out of the box. You don’t need to buy an official litter box. We repurposed a large plastic storage container for Domino which he loves.

Cats like their litter box to stay in the same location. If you have a hankering for redecorating, or must move the litter for any reason. Plan in advance where the box will fit comfortably for both the cat and anyone one else in your household. Look for proper ventilation, away from busy traffic areas or noisy machines like washer/dryers or dishwashers.

I like using a “ghost” litter box for a few days until the transition. One in the new location and one in the old location. Once the cat is happily using the new box, the old one can be disposed of and the area sprayed with an odor-neutralizer.

If you’re interested in feng shui, don’t place the litter in the south west area home which is the “money area”. If you have no alternative location, keep the box clean and don’t use a covered box which compresses the bad chi of negative energy.

There are many methods of feng shui. To say it’s complicated is an understatement. After years of study, I’ve found the compass method to be the most accurate. This is a simplified version of the feng shui pie-chart I use. To get a sense of the area imagine an 8-spoked wheel is placed on top of a floor plan. In this case, the south east “piece of the money pie” is the bedroom. The other designated areas will be discussed in future posts. 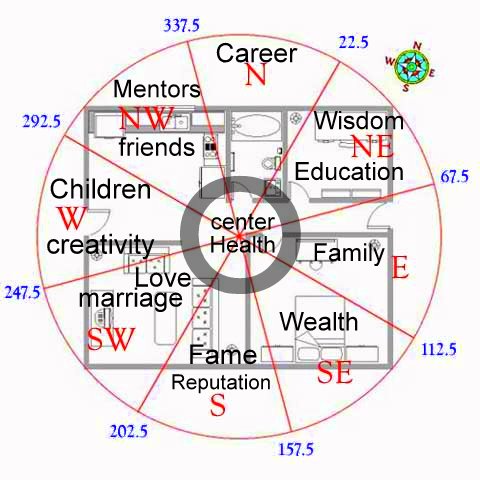 12 thoughts on “Think Out Of The Box”