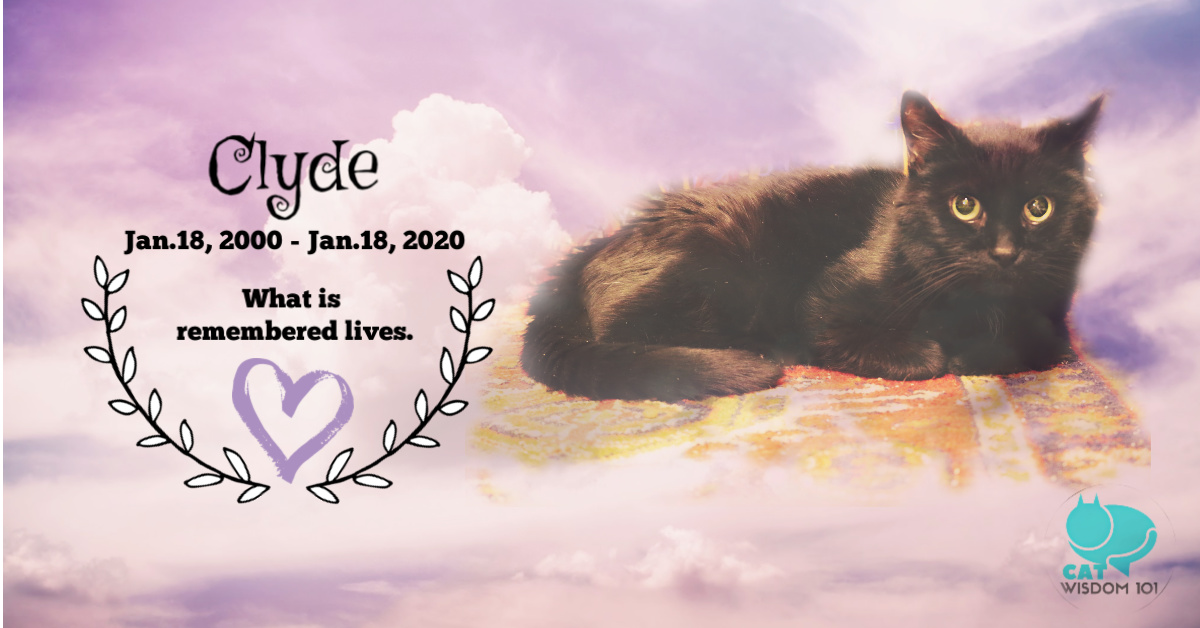 Huge thanks to everyone who left heartfelt comments, wishes and condolences at Clyde’s 20th birthday post, Instagram @blackcatsofig and privately. They were so beautiful I couldn’t bear to read them without crying. And I still haven’t responded to them. The Chinese New Year starts today and I’m superstitious about mentioning death (posting this just under the wire). I started doing a memorial post but I found so many wonderful unpublished photos and videos of Clyde I’d forgotten about, it warrants another post.

Today is about Clyde’s demise and sharing the practicalities of losing a beloved cat. If you don’t want to see a picture of a dead cat, stop reading. It’s my hope to normalize pet loss with respect and a healthy dose of reality.

Leave it to Clyde to exit on his big day. When cats in our cat world die, it’s not uncommon to write tributes literally before the body is cold. Bless all who can but I can’t. When my soul cat Merlin died, I didn’t share or blog about his death for a month. I just couldn’t handle the questions, responding to condolences or wonder how could I ever write anything to do him justice. 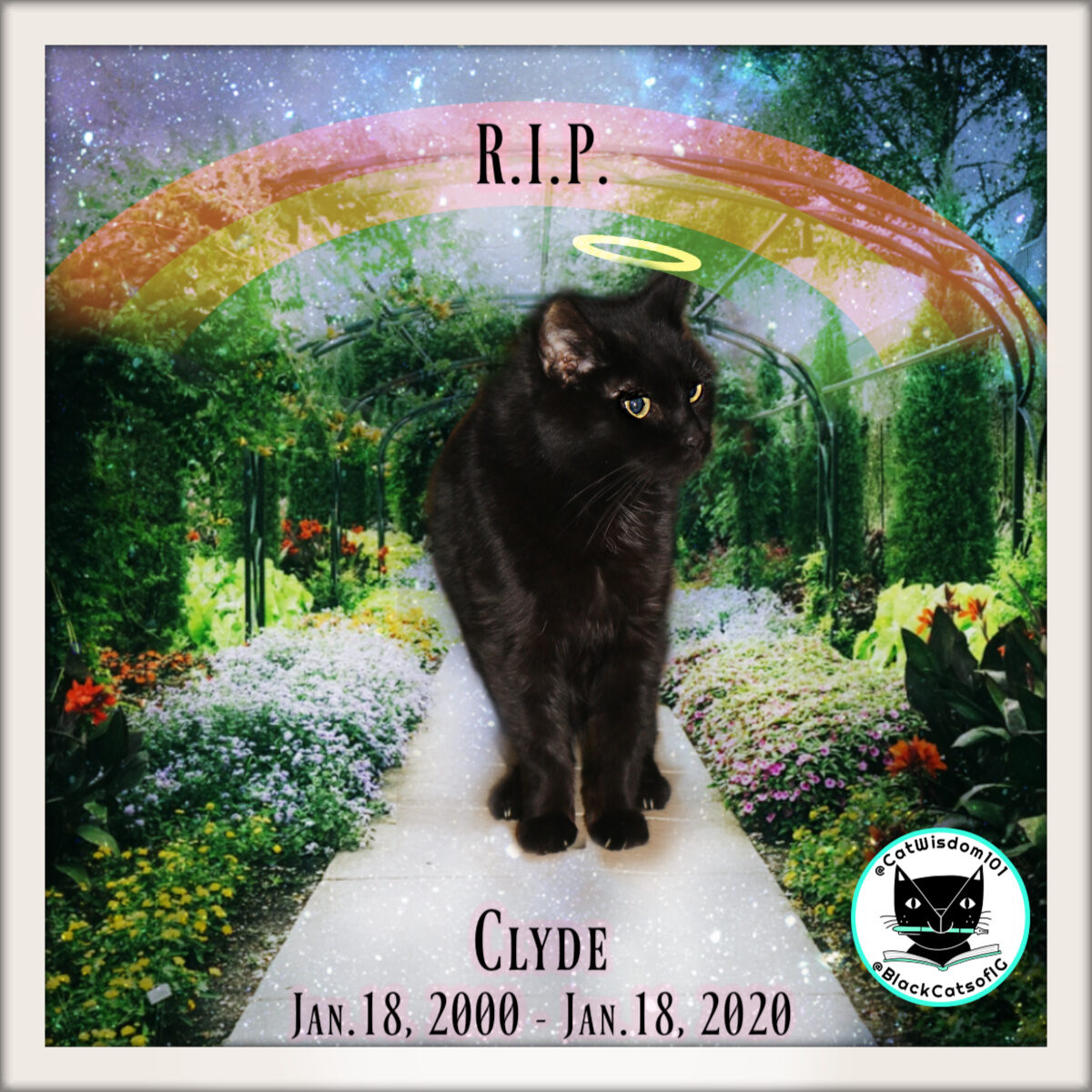 Yes, our panther boy fought a fierce fight but it was time. He rallied once more last week but then lost his ability to walk and eat on his own. The night after I posted his birthday post, he had a seizure. He communicated about wanting to die naturally but watching a cat die from a series of seizures as their organ shut down wasn’t an option. Sorry, Clyde. More woo woo stuff another time.

I believe we are so uncomfortable with death and suffering that we euthanize too soon and too often. It’s tricky topic but if we’re truly tuned into our cat’s well-being with awareness and not denial, the decision is easier. Not that it’s ever an easy decision. It’s about quality of life of course and accepting what a vacant look means. Clyde hung on without that hollow “kill me now” look until the day before. I hope we made the right decision. That’s what the vet and everyone says but that’s what they all say.

One of our dear blogger friends made this lovely tribute for Clyde. Thank you Pipo and Minko + Clyde adored summer and this is how I’d like to imagine him soaking up the sun’s rays with soft grass beneath his paws. 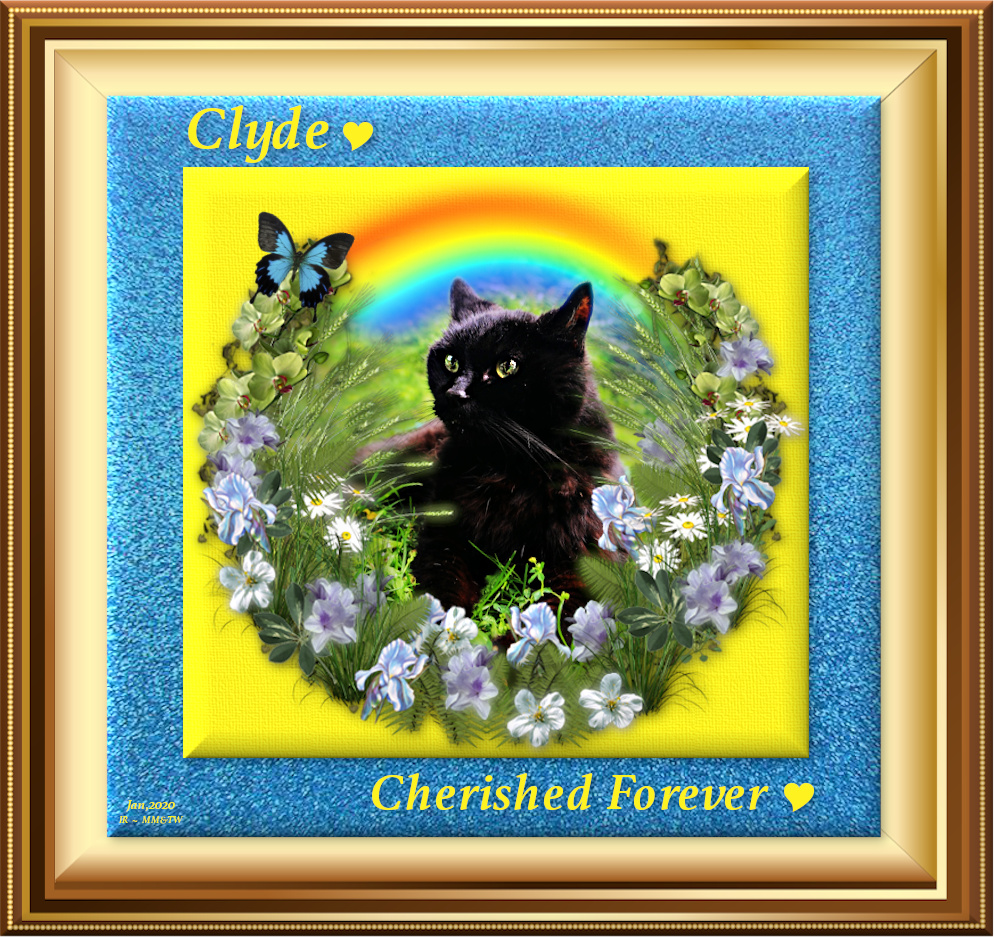 A snow storm was brewing last Saturday and we luckily got a local vet, Ryan and vet tech, Laura from Family Veterinary Care to come over last minute. It made sense to place Clyde on his favorite sunning spot and we waited. What a relief to stay in the privacy of one’s home. With the utmost reverence and compassion, Clyde was prepped and we said our goodbyes again. Euthanasia when done properly is gentle and fast. They made a paw print memento of those precious beans and just like that, he was gone. 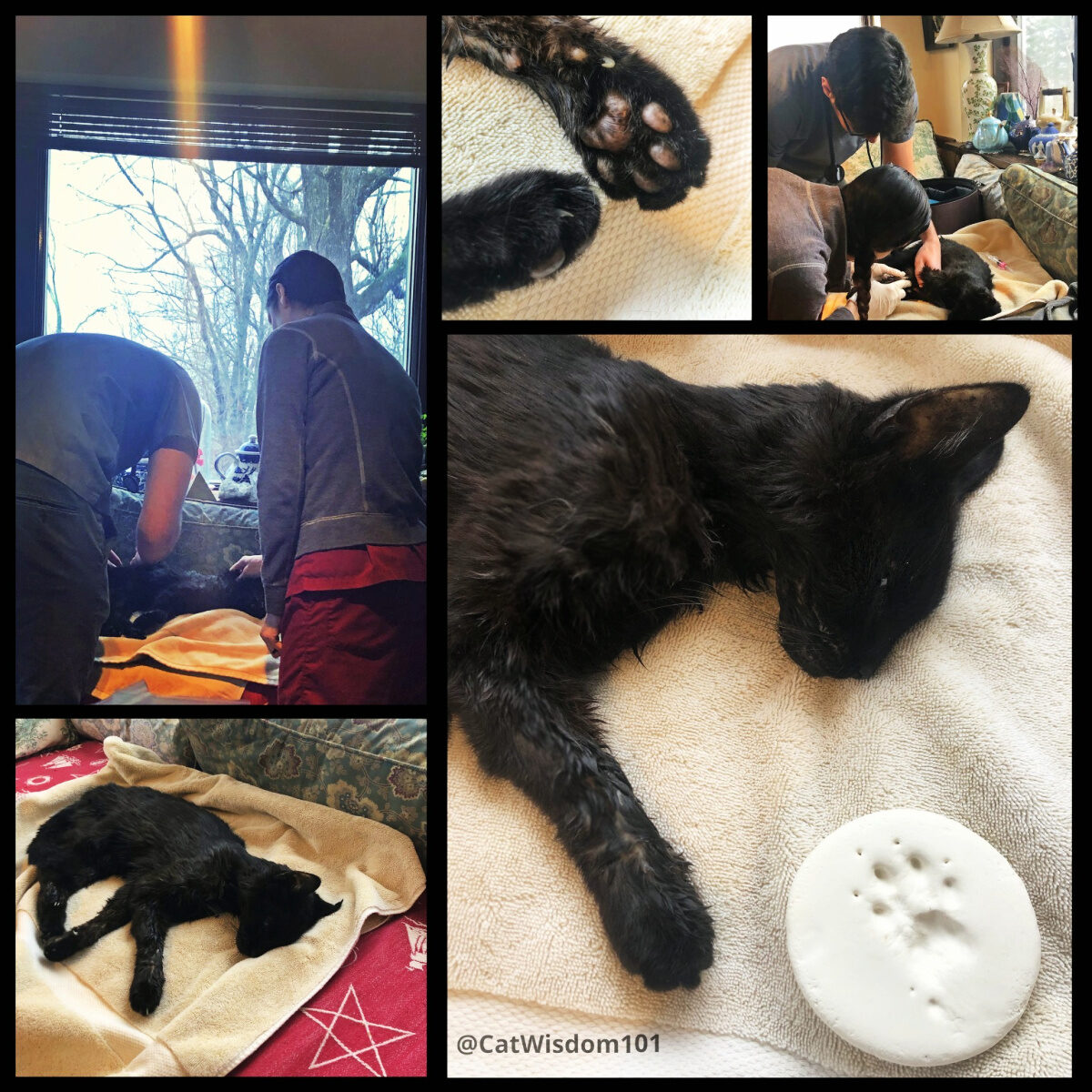 In seven years, this was our 6th cat loss and second euthanasia. Death is still an uncomfortable subject but I wanted to show how it’s a natural part of the cycle of life. I’ve come a long way. When we euthanized Coco in 2013, I didn’t want to touch the body. It creeped me out when her eyes opened (it’s normal) and we buried her immediately afterward.

Every cat life and death is different. With Merlin, he slept in the room with me for four days before a meaningful ceremony and burial.

I’m no longer uncomfortable touching a dead cat. With Clyde, I immediately felt him gone, a clean exit leaving a furry shell. His eyes remained open to the vastness of the Universe. Snow swirled outside as the vet team quietly left. I tucked him in for the night with a towel, not that he could feel cold and I lit a candle watching evening shadows close in. I went about my business making dinner, watching TV, checking email like normal except there was a dead cat in the kitchen. I continued to talk to him, pet him every so often, take a photo and enjoy having his presence. I can’t imagine why I’d felt the urgency to bury Coco so quickly.

I said goodnight to Clyde as I did every night. For the first time in weeks, I was able to sleep uninterrupted. Palliative care is exhausting but a final gift I never regret giving.

We are lucky to live in a State where burying cats is legal. Others prefer to cremate and keep their cat’s ashes at home. It’s all highly personal and okay.

The storm passed and in the morning, Clyde bathed in the best and brightest sun puddle ever. Overnight rigor mortis set in and his body looked a bit more shrunken revealing a canine tooth. Rigor mortis, the stiffening of muscles usually happens within a few hours, but it seemed to happen much sooner. I suggest moving a body into the burial pose you’d prefer asap. I moved Clyde’s tail but left his legs as is. He looked shrunken to half his weight and despite receiving sub-q fluids every day that week he was so dehydrated, he didn’t soil a towel during euthanasia.

We talked some more and with every photo I snapped, I felt anxiety. Oh no, will this be the last shot? Is today a good day for a funeral? When I wrap him up, I’ll never see his face again. The finality crept in. I ate breakfast with Clyde knowing it would be the last time by our favorite sunny window. I meditated and gathered items like catnip and crystals to place inside the towel for his after life. Yes, it was the perfect day for a burial and thank God, hubby had dug a grave on a warm day before the freeze. 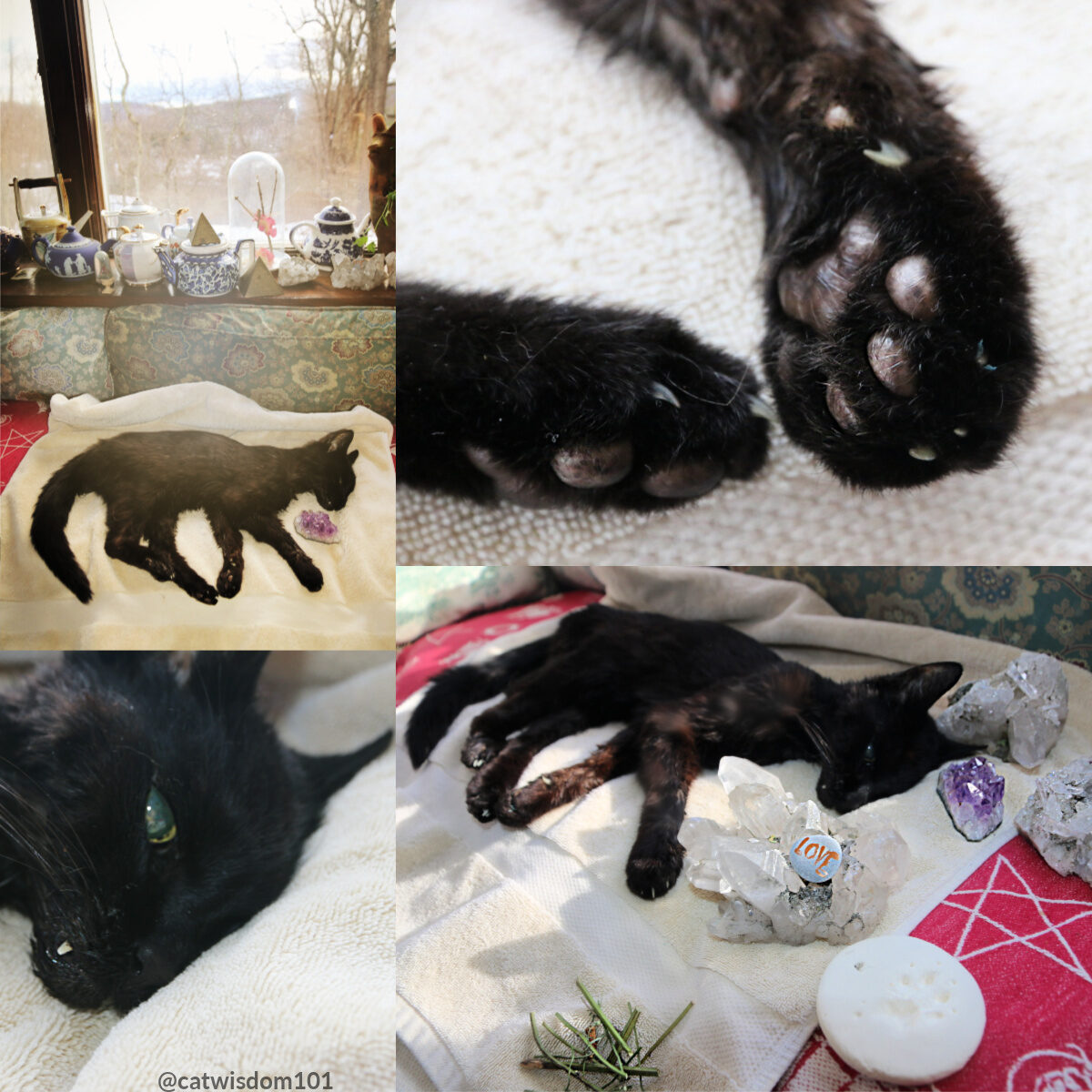 I’ve buried cats in wooden crates, boxes, bio-degradable pods but now prefer simple burial shrouds. I had some leftover fabric from Domino and it was just the right size to wrap Clyde in the towel and then the fabric. Two hand-tied knots and my bundle of love was ready to go to his next adventure. 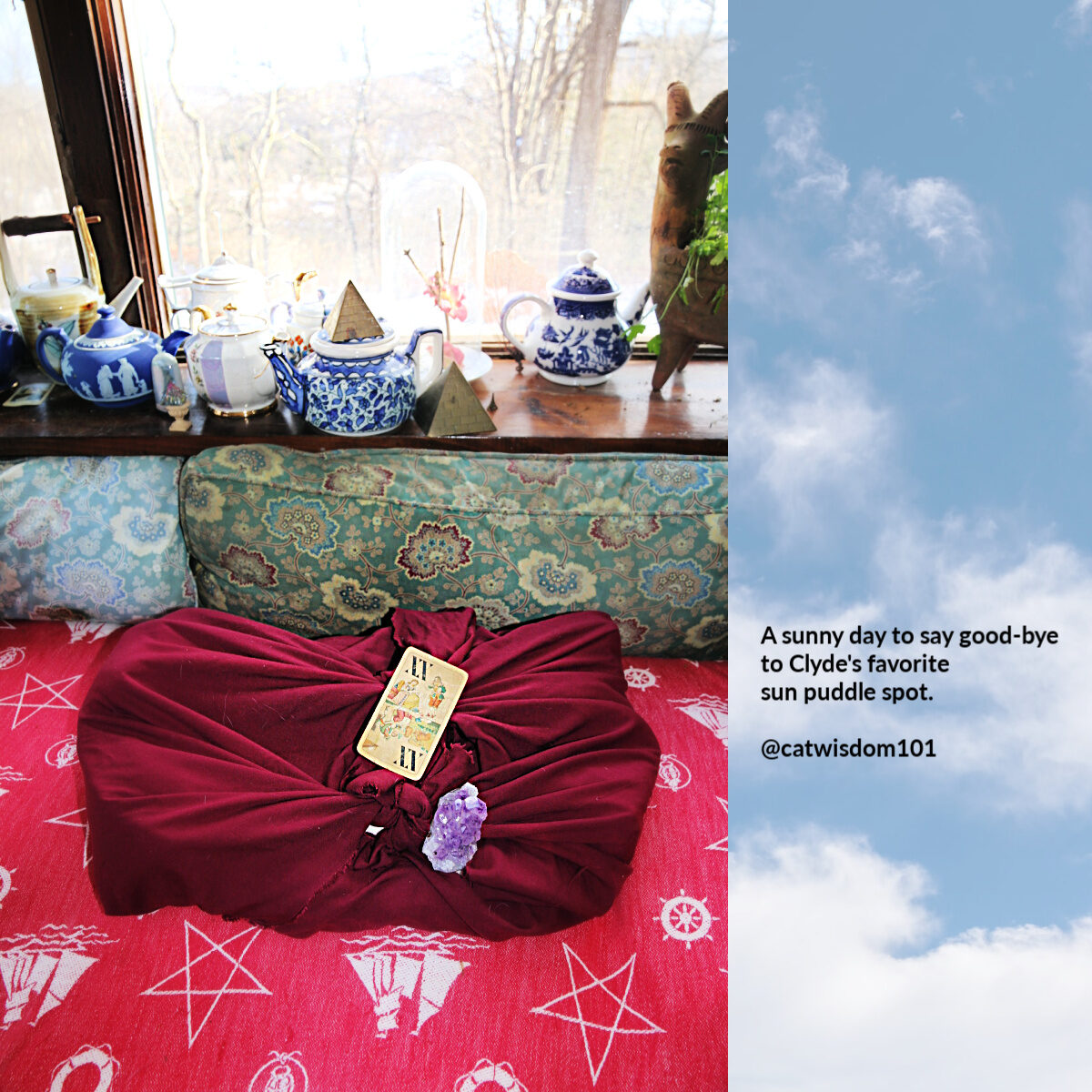 For anyone has never dug a grave, it’s hard work. You need a good shovel and earth that’s not full of rocks or roots. We decided it best to bury Clyde right next to Domino in a flower bed. It turned out to be rather shallow but we like build it up into a mound. And I suggest placing a heavy board or object for a few days to prevent any animals from digging. There are a surprising amount of details to work out in advance but that’s true for any death. With humans, at least in our society, we have funeral directors and planners remove tasks, but there is something cathartic about getting your hands dirty. God really is in the details.

When Domino died in November, I posted a tribute with tons of photos but nothing from his funeral. He died naturally and Clyde said his good-byes in a warm sun puddle. It’s important for every person to memorialize their cat in their own way. My husband likes to print out photos and write stuff on them. He placed a big photo of Domino on the chaise where they’d watch TV together. He no longer sits there but the photo stayed put until recently. 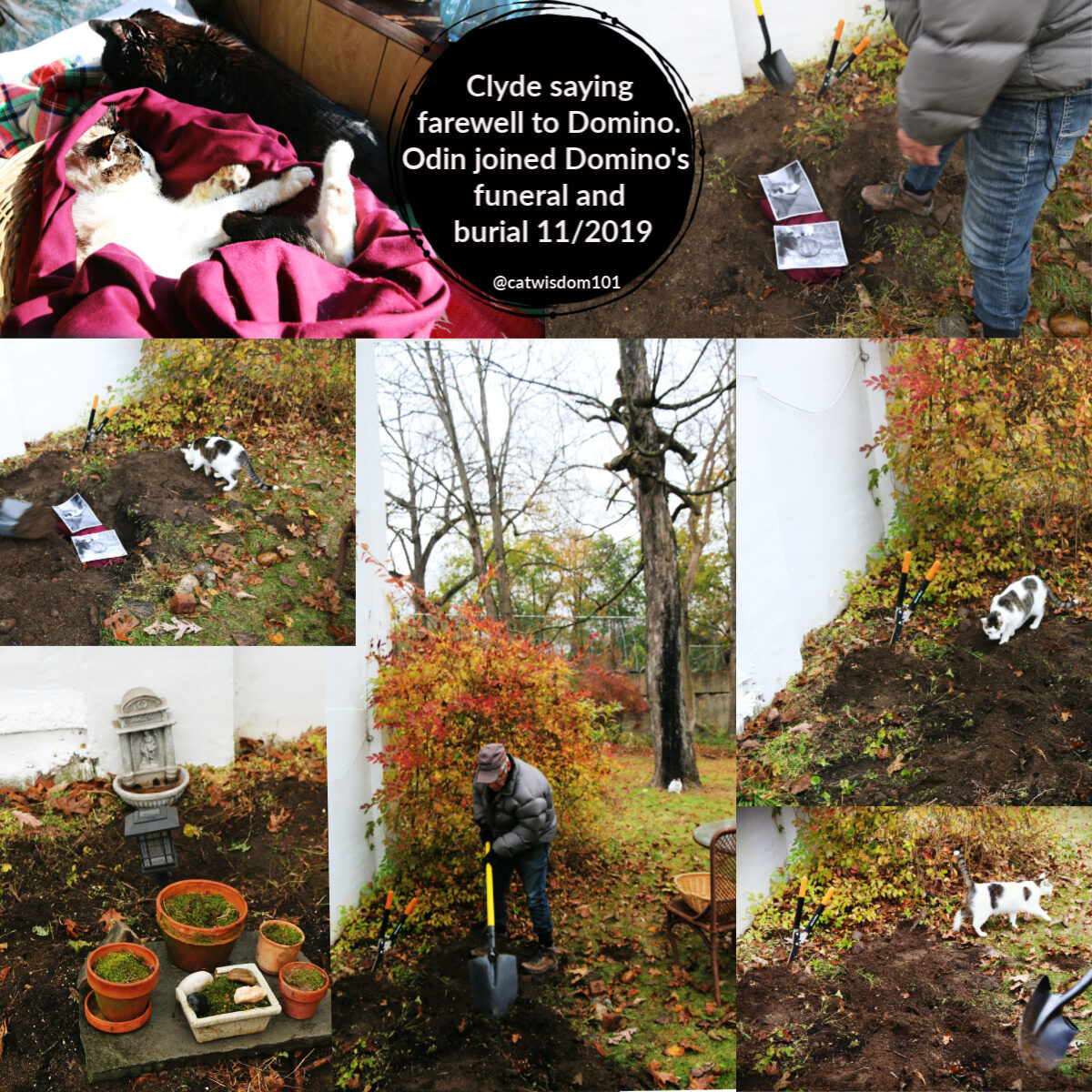 Odin joined the funeral, checking out the grave, sniffing and then dashed off after saying his good-byes. For Clyde, he gave one sniff and expressed zero interest. Granted, they weren’t as close as Domino his old wrestling pal. 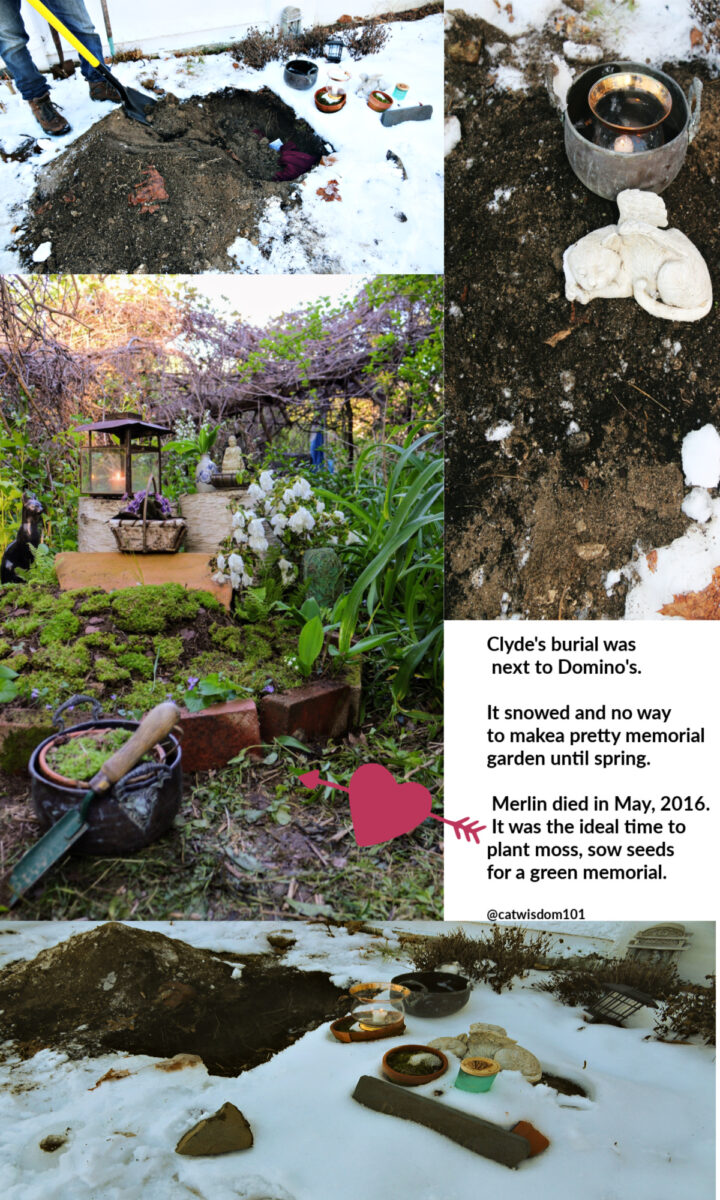 Burials are messy but if you like gardening, it goes with the territory. I can’t wait for spring to create a beautiful memorial garden.

Odin knew this was Clyde’s favorite spot but it’s up for grabs now. I confess I couldn’t bear to sit there with my morning coffee for a few days but now it feels bearable with happy memories. And so it goes, then there were two. 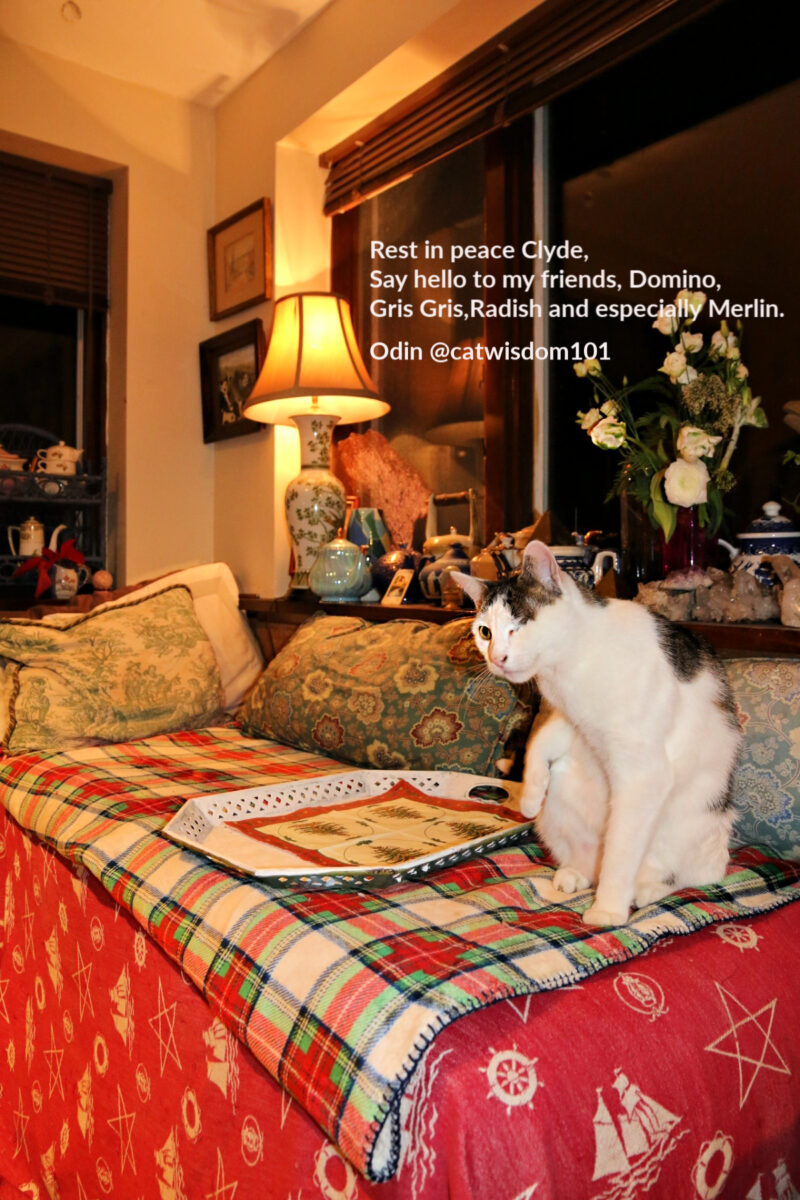