What a week! There’s never a dull moment at our house for the cats or the humans. You’d think our appearance on The Daily Show on Monday night might have been the highlight, but it wasn’t. Last Sunday, I attended a fund raiser committee meeting at Cat Assistance, the shelter (where Odin and Gris Gris are from), and left with a little Siamese foster girl. It was the last thing I expected, but when I took one look at her and heard her story, I knew she coming home. She looks and has a similar energy to Coco, Merlin’s sister who passed away last September.

Sakura was surrendered to the Yonkers shelter over a year ago when her name was Ling. The previous seven years of her life remain a mystery. In the past year, she was adopted (it didn’t work out) placed in foster home, returned again to Cat Assistance and when I met her, super stressed from two pet adoption days and refusing to eat or drink much.

I’ve had Siamese cats for most of my life and know them inside out. This one is high strung, fussy but affectionate and needs a chance to de-stress or she’ll never be adoptable. Many cats simply don’t show well in a caged shelter setting. Speaking of stress, it’s never an easy decision to bring home another animal. There is an adjustment and ripple effect on for every member of the family. I’ve been happily living with five males (including hubby) and questioned bringing in new female energy, but I trust my intuition and it’s turned out for the best.

In under a week, Ling Ling or Princess Ling Ling as she likes to be called, has gone from homeless to Diva. Ling is Chinese for delicate and it describes her to a T. She’s a delicate thing, barely five pounds with velvety chocolate points and paws. Her kitten size hides an outsized inner tiger. She’s hissed the mancats under her iron paws and claws in short order.

Merlin did draw the line in the sand at bringing Ling Ling into bed last night. He punished me briefly by not cuddling at bedtime but forgave me by morning, his honor and top spot in the hierarchy intact. The juggling of meals, moods and general maintenance is a minute by minute job, but I wouldn’t have it any other way.

I do have new found respect for cat lovers who successfully have more than six cats!Ling Ling in Coco’s old chair

Most Siamese hate enclosed spaces and after one night in a large bathroom, Ling Ling let me know she wanted out. She hasn’t used the bed she came with since. She prefers much to my surprise, an old office chair on the third floor that Coco used to love. In fact, it’s still covered in her cat hair. Merlin spends most afternoons up there as well, oblivious to her unless she gets too close. He can’t see her but he can smell her and hear her hiss.

Day by day, with play, petting, Reiki and communicating, her confidence has grown and she’s comfortable in all the rooms now on the second floor. Feliway the plug-in synthetic “feel good” pheromone is working its magic as well. I kept the camera away from Ling Ling until yesterday, when she allowed me limited access. It reminded me of when Odin and Gris Gris arrived, their nervous energy made decent shots impossible. Odin, of course can’t get enough camera moments and Gris Gris secretly now likes the attention. 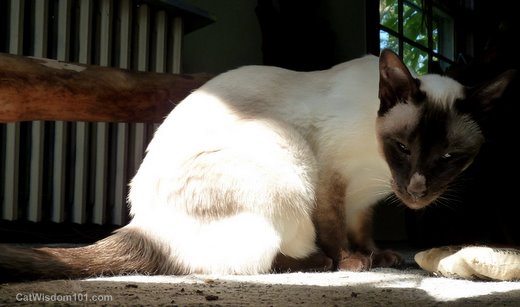 A more serene Ling Ling enjoying a sunny spot in the cat’s playroom. 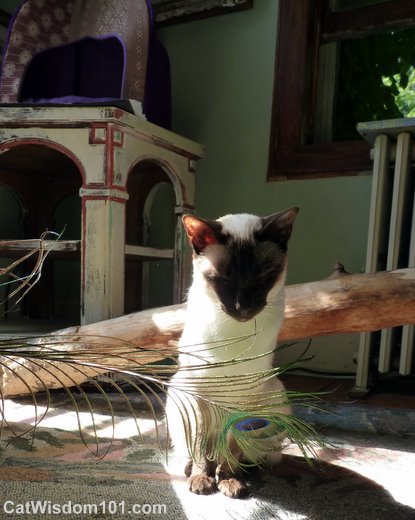 Gris Gris, who is very gallant, gives Ling Ling a wide berth and is happy either napping with Merlin, napping on the porch with Domino or exploring in the garden. Yesterday, the bed didn’t get made; I didn’t have the heart to disturb the two old boys, Gris Gris and Merlin. 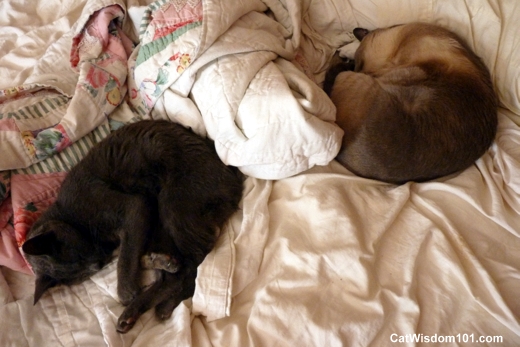 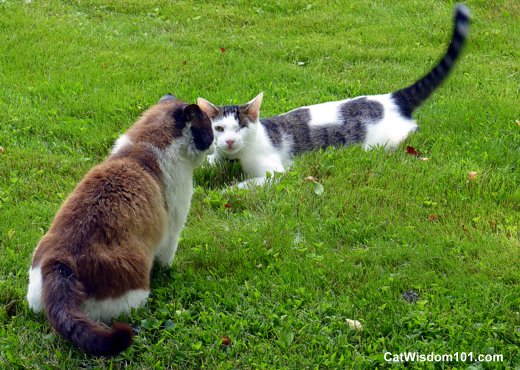 Odin will do anything to get outside to play with feral pal Domino. He made one escape this week without his harness and blissfully tumbled in the grass yesterday and had a secret meeting with him under the magnolia tree (no doubt plotting world domination!) Finally, after climbing a few trees and properly panting he agreed to comes indoors. The good thing about his strenuous exercise is he’s docile as a lamb all evening. 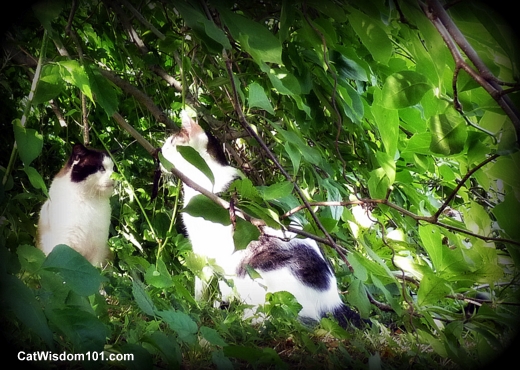 At first, Odin was the only one who was curious about Ling Ling and wanted to play. No dice. His retaliation was taking a big dump in her litter, but he’s far more interested in plotting his next escape.

We’re delighted to report on Domino’s continued improvement. He’s still limping but using all four legs. This was the first I caught him using both front paws for scratching. Hubby insists on giving him more food to make sure he’s getting all his meds, but don’t you think he’s getting chunky? 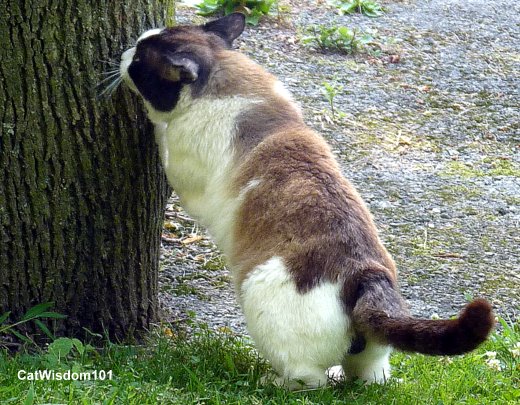 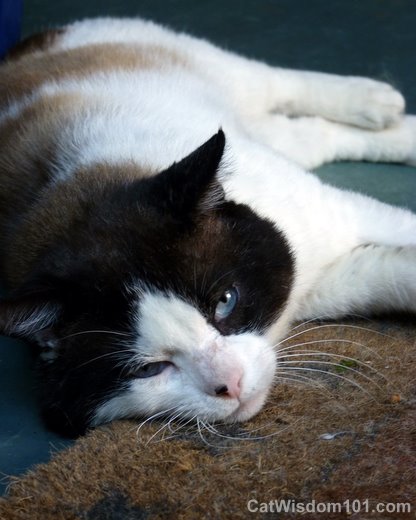 His eyes are brighter and we’re our keeping paws crossed his next few weeks of treatment. At the end of the day, it all comes down to loving cats and doing whatever we can for their well being.

Another thing to celebrate! It’s Petfinder’s 15th birthday. This weekend, July 15-17, Petfinder is joining with over 1,500 rescue groups and shelters across North America for what could be the largest adoption event in Petfinder history to hopefully get 15,000 pets into furever homes! Spread the word. 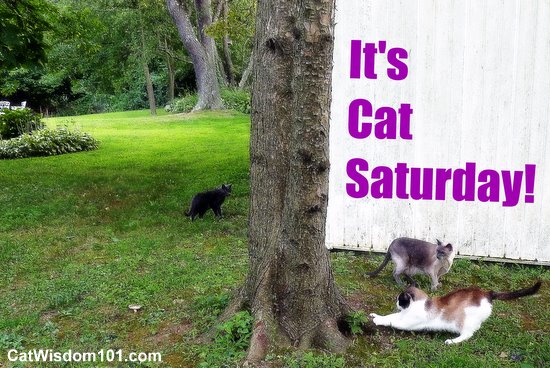 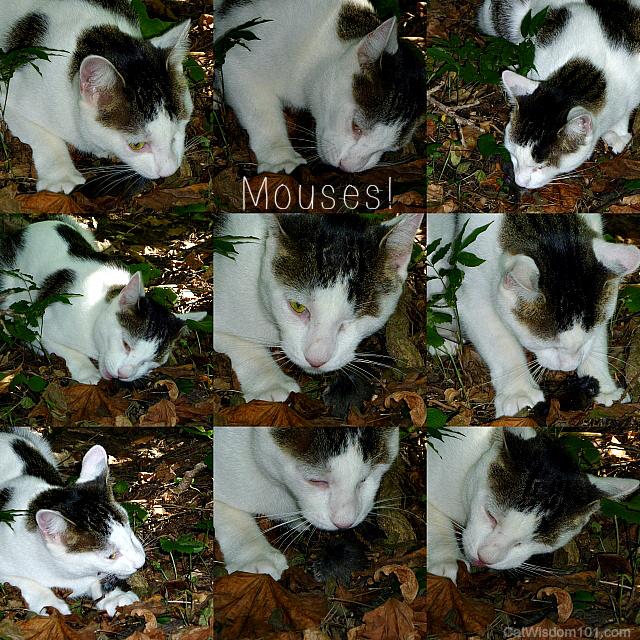 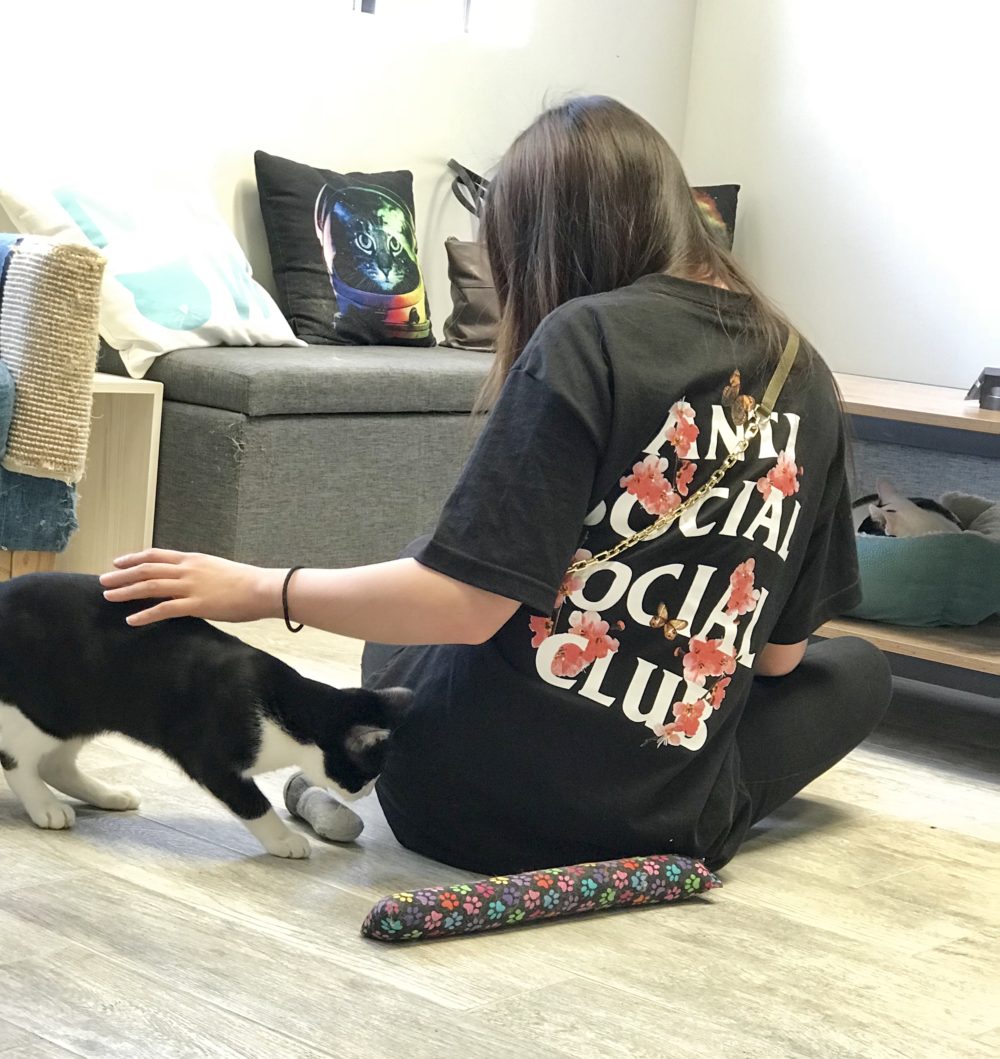 We Visit The Cat Cafe Lounge in L.A. And Reveal How It’s Purrfectly Different