Domino is recovering well from a URI but Merlin is struggling. He’s on homeopathy, a nebulizer but his appetite is off. For a 20-year-old cat in decline with CKD, it’s life threatening to have a virus. With the death a Radish barely a week ago, it’s a perfect storm of stress to threaten my sanity. In a creatively desperate moment yesterday, I slathered coconut oil onto a wooden honey spoon and Merlin loved it. It jump-started his appetite and he’s eating but not nearly enough. By the time you read this he’ll probably be syringe fed as well. If I’ve learned anything lately, it’s the realization how tenuous life is. All the hope in my heart won’t keep him alive if it’s time to go.

When I first met Radish four months ago, the loud cries of the wiry, ginger cat filled the tiny, shelter room. Get me out of this metal cage. Get me out of this windowless room. Get me out. It was the same every time I opened the door except for the last time. Three weeks ago I opened the door to take him home and he didn’t utter a peep. That was my first clue something was wrong. Hindsight is famously 20/20 and the clues have mounted over the past few weeks. Insights into why he entered my life and why he exited when he did.

I didn’t know until last week what his real purpose was. It’s why his death hit so deep and hard. For weeks I’ve flip flopped between my rational brain and emotions. My logical brain thinks I’ve lost my mind. I may have lost my mind but I found my heart. You see, in my quest to protect my heart once Merlin dies, gradually it got armored instead. On the surface, it seemed like I was as loving as always but it was Teflon-coated. I went through the motions of emotions. Did all the right things. Despite all the therapy, self awareness and wisdom, I’d fooled myself. I felt love but through a filter. I thought I knew the dance of surrendering and letting go but Radish stripped the coating off and cracked me wide open.

He left his mark in retrospect deliberately and prominently in places he would not be forgotten. In every room of the house except the third floor. I can see him in my mind’s eye on the kitchen rug where I stand to cook, beside the sofa where I watch television, beside the bed where I sleep, under my desk where I work and by the front door where I enter and leave our home and where he excited the mortal coil. The carefully planned safe room in a bathroom was never used as I expected. The cat I knew in the shelter was athletic, able to jump to a counter height with ease. Knowing he liked to climb, I created vertical space to perch and look out the windows, gathered a bounty of toys, scratching posts, cozy nooks to hide in, but the cat who arrived could barely walk, let alone jump.

He made it clear during the first night, he would not be requiring the safe room, thank-you very much. Closed doors were not acceptable and he proceeded to sleep in a different room every night as if to make the most of his limited time. Even after a URI took hold and our vet said to keep him in quarantine, we couldn’t do it. The safe room become an ICU for administering meds, sub-q fluids and nebulizer but Radish demanded complete freedom. We fell under the spell of a cat that was more than a cat. He was able to communicate at any given moment exactly what he wanted and we fell backwards surrendering to his every desire. I’m still grappling with the weirdness of everything that happened; of trying to make sense of something beyond logic. 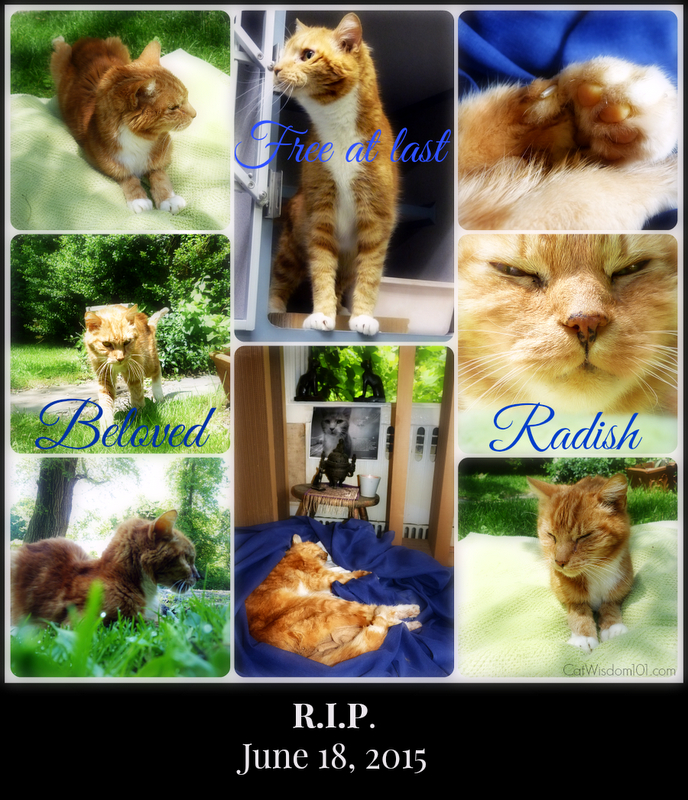 This was the cat who responded in the shelter to any command without training. Come, sit, jump. Sure no problem. Sit on my lap for grooming. No problem. Aggressively bite others but not me? Oops. That should have given me a clue that Radish was not your regular cat and that we had a destiny but I refused to see it. With Merlin in decline, I didn’t dare entertain the thought of bringing another cat home and slammed the door to my heart. Fate had other plans. What I’ve learned is: we can resist, deny and run away from our path but sooner or later something happens to wake us up to get us back on track. Illness, obstacles, opportunities, serendipity, acts of God, death. Whether the experience is perceived as negative or positive is relative and as changeable as the wind. Tragedy can bestow unexpected gifts beyond measure. Pain and grief tempers compassion and strength. We’ve heard all that before but when it happens, we can accept the change or not. These are only my woefully inadequate words but my truth.

As someone used living at full throttle, of being professional, meeting deadlines and going the extra mile, I’m finding it really hard to let go and surrender as my normal life has ground to a halt. Until the new normal is found, I’m feeling as vulnerable as a newborn kitten but curious about what lies ahead. Not only has my heart broken open, I’m facing physical illness, family issues, lost wages and lost opportunities. Never let them see you sweat was my motto. Be transparent but don’t show your hand. We live in a society where the show must go on; grin and bear it at any cost to your body or soul. Mine is screaming: Enough. Stop or we’ll stop it for you with a more serious illness. But wait, I’ve been here before and I only listened halfway. I made changes but as soon as things improved, the old ways and habits returned. Clearly, I have not learned my lesson.

Radish made me realize: this is my life. What’s important? I could be dead just as easily as him. Yup. Why does it take death or near-death or prospect of death to wake us up? I’d planned a different kind of memorial for Radish but I think we’ll be hearing from him again. His work as far my lessons are concerned is not done yet. And Merlin, my other teacher/muse no doubt has a few lessons left for me.

What lies ahead is anyone’s guess but the kindness of friends, strangers and readers like you helped lift the veil of illusion. Thank-you from the bottom of my heart.

Peace, love and purrs of gratitude, 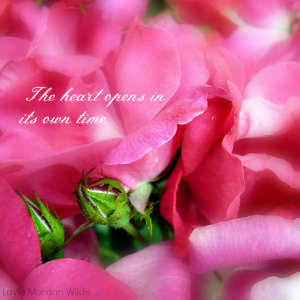 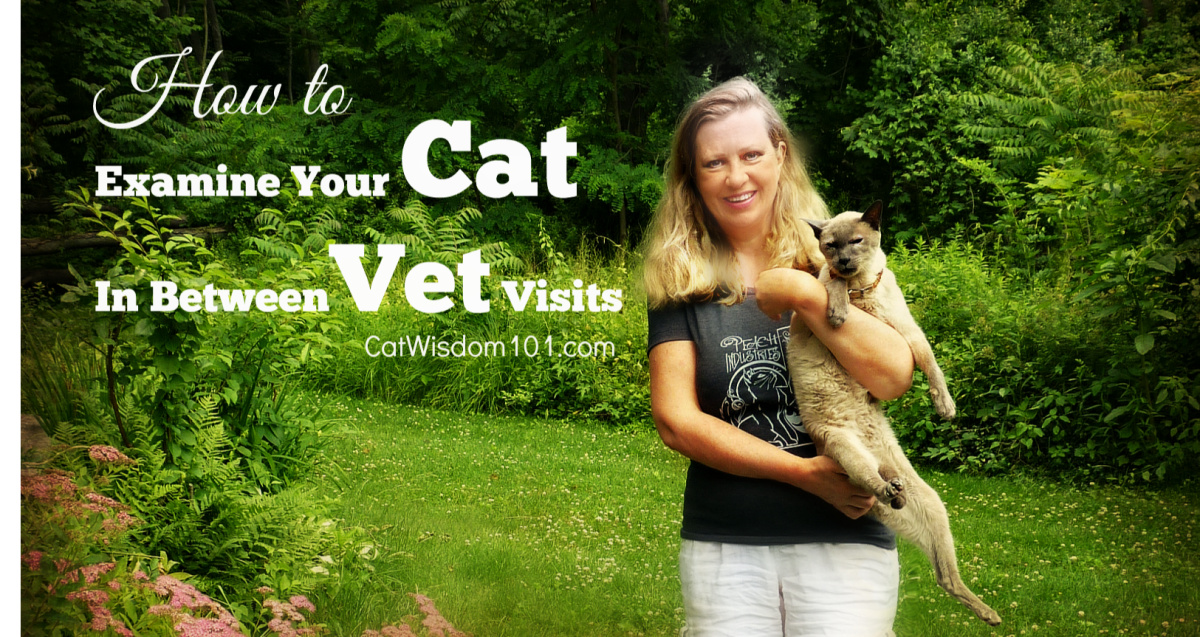 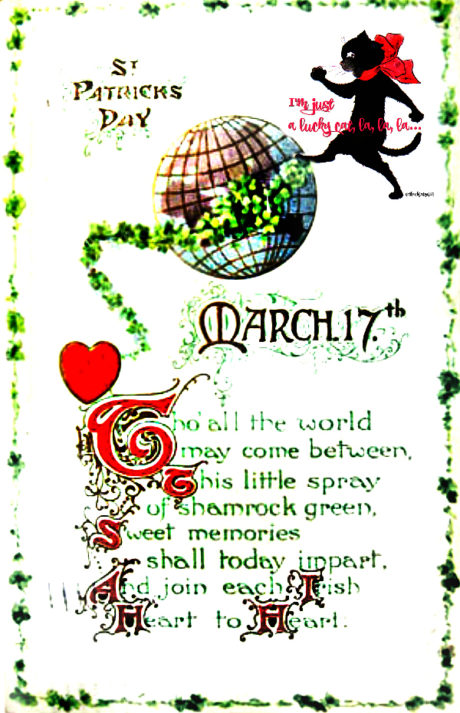 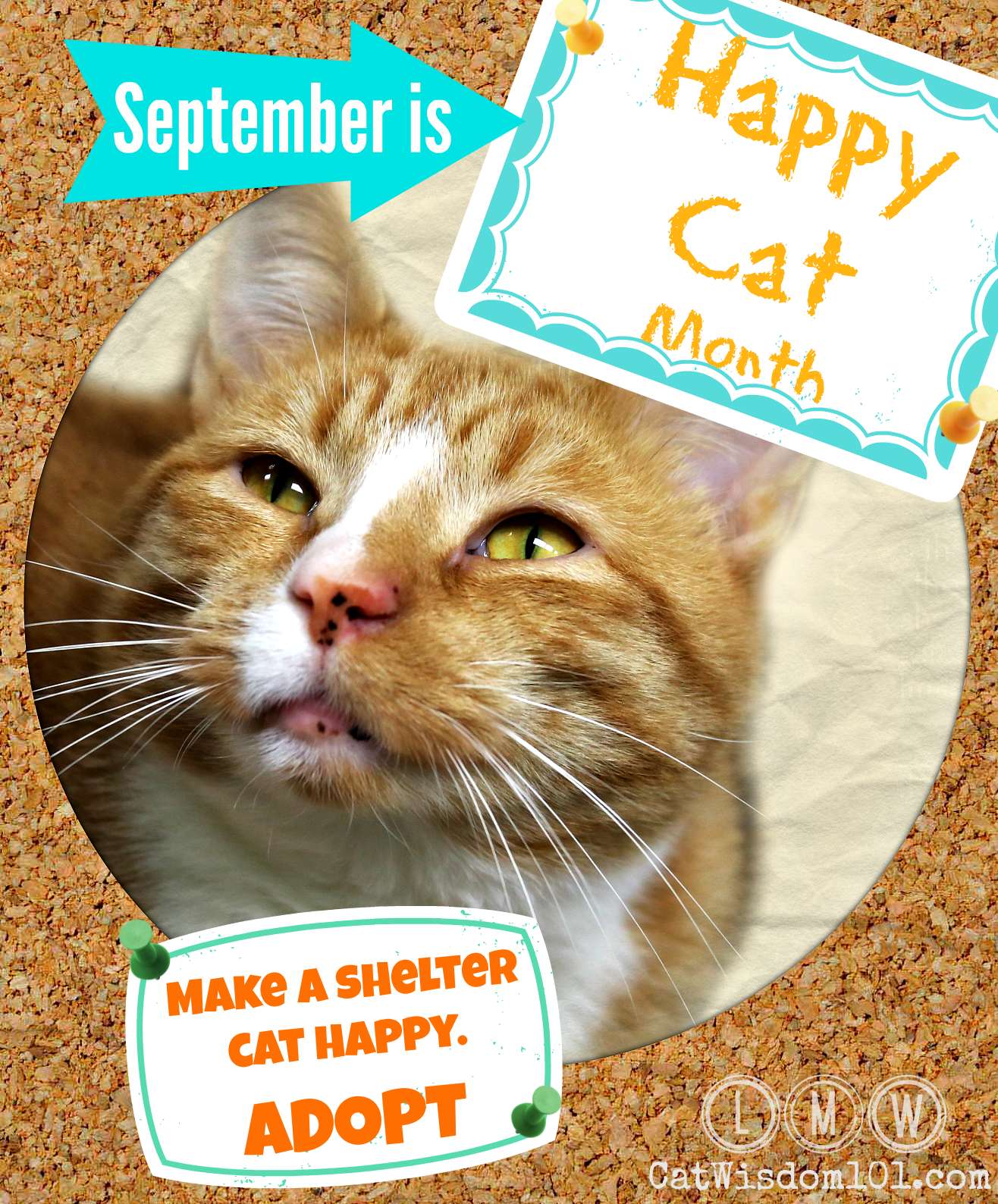