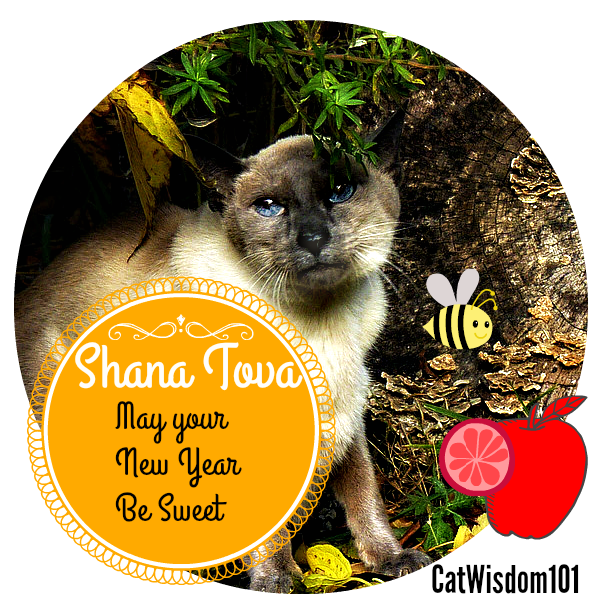 Hello dear ones and before you think I’ve converted to Judaism since arriving in The Summerland, rest assured, I remain Zen by nature.

However, my furbro Odin is Jewish, as is our dad. I thought it would be useful to share a few useful facts about Rosh Hashanah, the Jewish New Year regardles of your spiritual beliefs.

Knowledge is the bridge to compassion. What we don’t know, we are more likely to be wary of, leading to fear and before you know it, the irrational collective hatred of witchhunts, lynchings or the Holocaust.

Note: This is my feline opinion based on many lifetimes of observing humans. Can you imagine even the largest feral colony ganging up and torturing another cat? Never. Mice, okay but that’s thousands of years of keeping vermin away, to help humans.

What Gentiles Need To Know About The Purrfect Jewish New Year

This the purrfectly simple feline version.

So, it’s Rosh Hashanah, the Jewish new year and one of the holiest holidays in the Hebrew calendar.

Our Rosh Hashanah post in 2012 sums it up Like ships that pass in the night “We never know who is leaving or when.” The only thing I know for certain is: no matter how stuck or stagnant we feel, the seasons will change. It’s only when we look back through time, do we see changes.

Can you believe me and my sister Coco would have been 22 years old yesterday! So much change in the past year, but change is the only constant. Ride the waves dear ones.