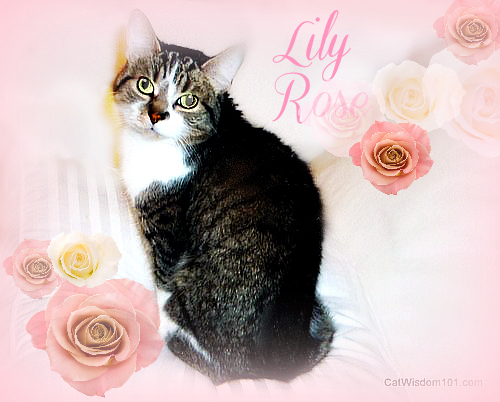 When the last of my mother’s elderly cats died this summer, she felt bereft. With her home as empty as her heart, my mother acted without thinking. Most senior citizens might think it too late to adopt again but not my mom. Shortly after Miki died, she adopted a older cat from a sick neighbor. I advised her not rush into it. “What do you know about this cat?” I sensed things were not quite as they appeared. Stubbornness runs in my family and my mother as usual didn’t listen to me.

“Who cares? She needs a home. And a new name. What kind of person calls their cat Stinky?”

And so Stinky came up smelling like roses in her new home. They bonded. She was renamed Lily Rose but a stubborn diarrhea persisted through three kinds of antibiotics and vet bills in the four figures. The cat’s history according to her previous owner was vague and suspect. She’d had her for seven years but hadn’t brought her to a vet in years, if ever. I didn’t believe a word she said.

Last week, I finally received a photo of Lily. Digital is not in my mother’s vocabulary. A pretty petite tabby looked straight into the camera. Who was she? Cats are naturally mysterious and masters of adaption and reinvention. Some older cats in shelters will make wonderful pets if given a second or third chance.

It turns out Lily’s past was even more complicated. My mother found out last week that Lily had not one but two previous homes and who knows what other names and lives. My mother doesn’t care. This senior girl is hers now and I hope, in her last home.