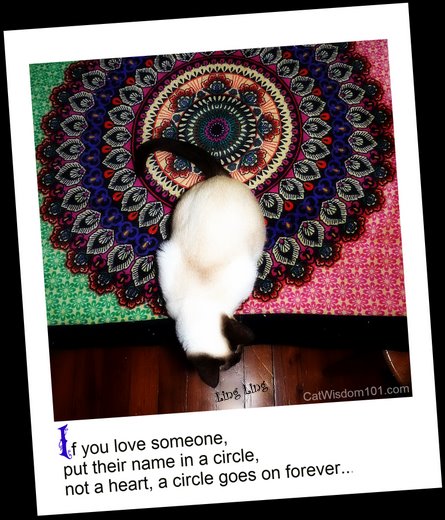 Sometimes, no matter how much love to we have to give, it’s not enough or we run out of time. That’s what happened with our foster girl Ling Ling. She came to us very ill and traumatized in July. I nursed her back to health and she made big behavioral strides, but fate stepped in and someone wanted to adopt her. A single, older cat man who loves Siamese cats just lost his meezer to cancer and wanted to adopt Ling Ling.  It’s always the goal of every foster parent to see cats find a forever home.

Dear Ling Ling went to her forever home yesterday. Merlin and Gris Gris can breath easier now that the aggressive Dragon Lady is gone, but she stole my heart and I miss her. Sometimes the right decision is a painful one, but when someone’s door closes, it opens for someone else. The circle of love lives on. I’m blindsided by my emotions and Kahlil Gibran said it best, “…love knows not its own depth until the hour of separation.”

Update: In hindsight, nine years later, I think I made a mistake. “We could have objected. We could have adopted Ling Ling. She could have been a failed foster, but we felt pressure from Sara, the rescue organization owner because the man was a friend. I felt it was too soon. His cat had just died and it wasn’t his first cat that died of cancer. I felt a creepy sense of unease when he refused the carrier with her familiar scent to his old one. A very old one with a curved plastic top that must have housed all his cats of the past 40 years. He also wasn’t keen on any follow-up call or relationship. I did call once to a cool reception. I mentioned it to Sara but she brushed it off. What else could I do?

On the surface it was a successful foster to adoption.

My intuition ( I really hope I’m wrong) is that Ling Ling would have been happier with us. I also feel she’s probably dead by now, of cancer.

Red flags popped up about the way the rescue organization was run. The rescue with 30+ cats (contained in two rooms of her home) was over crowded and reeked of urine. It was understaffed and I eventually couldn’t in good conscious support them.  There were several cats that had lived there for years. Eventually  they moved to parts unknown. I can only pray the cats are in a better place.

I don’t remember Ling Ling’s new owner’s name or I’d track him down or only to be proven wrong. And maybe the saddest part? I’ve never fostered another cat.