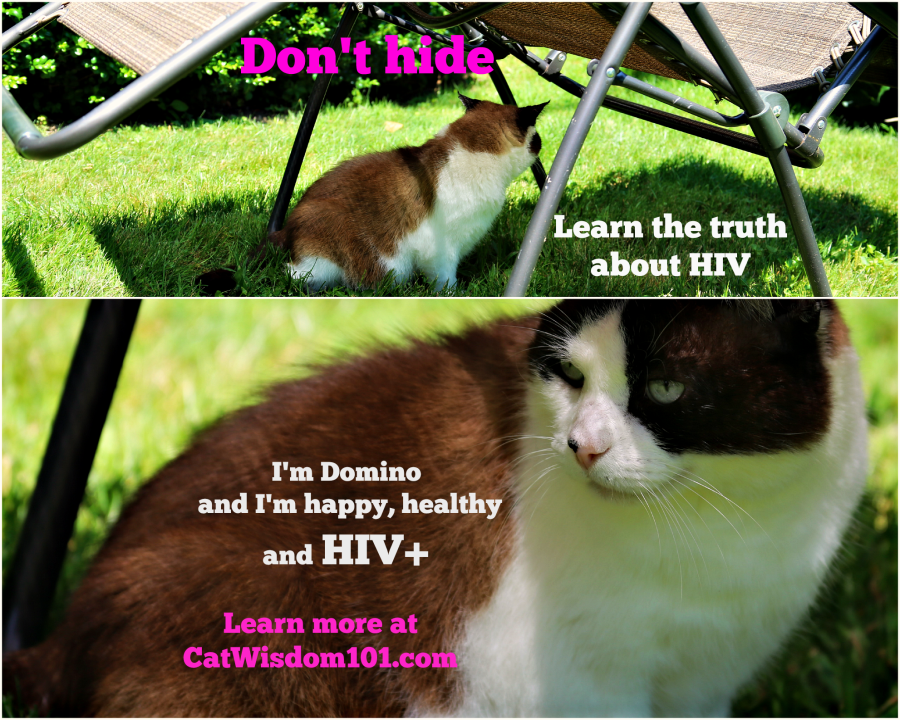 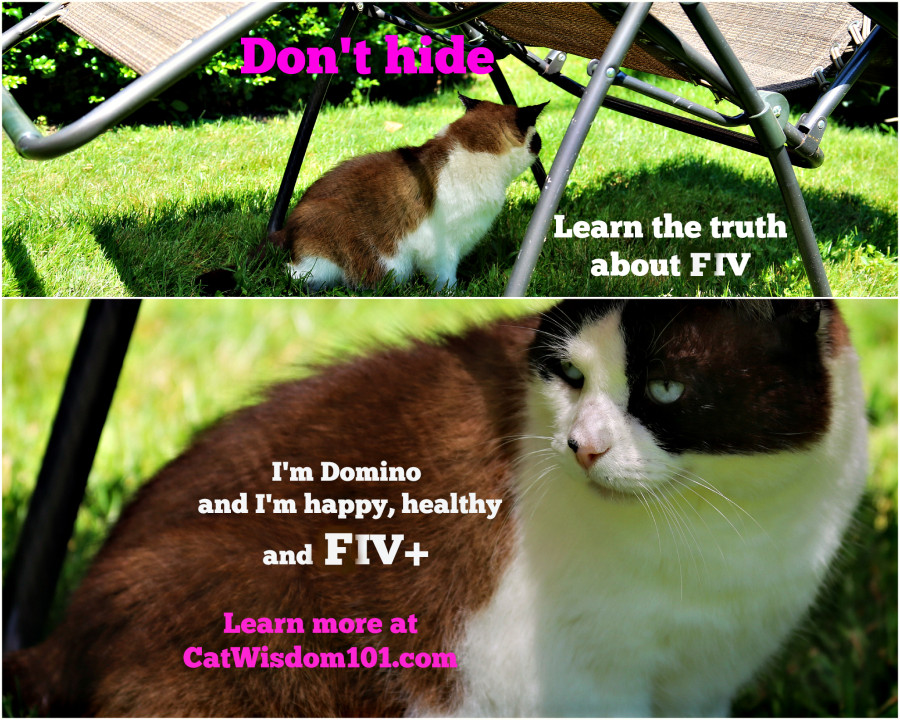 Myths surrounding cats and FIV continue, resulting in fewer adoptions. Our FIV+ former feral Domino is a happy, healthy cat and we never worry about him infecting our other cats. Myths or public misinformation can only change with education. Our regular Vet 101 contributor Dr. Letrisa Miller recently attended the Feline Medicine Symposium at Cornell and shares her update on FIV.

We’re also proud to announce Dr. Miller is a finalist for America’s Favorite Veterinarian!  Voting in on until August 30 and you can easily vote HERE

Look for our exclusive Q & A with her next week.

FIV, Your Cat, and You
By Letrisa Miller, MS, DVM

FIV: feline immunodeficiency virus was first recognized in 1968 in the United States, although it has probably been present for much longer. FIV belongs to a family of viruses called “lentivirus,” which also includes the feline leukemia virus (FeLV) and the less well-known feline syncytial-forming virus (FeSFV).

FIV, although frequently described as the feline version of HIV or AIDS, is not the same disease and is not dangerous to human beings.
Like many viruses, FIV is found in several strains, each of which differs slightly from the other. One of the major differences is the severity of disease caused by the virus. Fortunately for the USA’s feline population, the strain of FIV most commonly found in North America causes less severe illness than strains found elsewhere. Even better, the reported rate of occurrence of FIV infection in much of the United States is low (3 out of a hundred cats or less).
Many cats that are infected with the virus remain healthy for long periods of time and may never show any signs of illness from the virus. Those who do show illness tend to have problems with fighting infections because their immune systems do not respond well to infections and can’t effectively fight illnesses. This is called “acquired immunodeficiency syndrome.” Cats who do become ill as a result of the virus might experience chronic gingivitis, swollen lymph nodes, upper respiratory infections, chronic skin diseases, and/or chronic diarrhea. Some will show behavioral changes, and some will develop cancer related to the viral infection.

Cats that live indoors with fewer than six feline housemates have almost no risk of getting FIV. For those who go outside or have more than six housemates the risk is still 3 percent or less. So, although the disease is out there, your cat is unlikely to become infected.

Have your cat tested for FIV. Testing at most veterinary offices is quick and easy. Only a small amount of blood is needed, and results are available in about fifteen minutes. Your cat should be tested

Testing is important for several reasons. If you know your cat is infected, you can

Many municipal animal shelters routinely euthanize cats that test positive for FIV. How many of those cats might only have been vaccinated? Further weighing against the vaccine, it has an unclear effectiveness and is not made with the strain of virus most common in the United States.
Until veterinarians have a reliable FIV test that can distinguish between vaccination and infection, the American Association of Feline Practitioners recommends not vaccinating against this disease.

If your cat tests positive for FIV, you should have it retested six months after the initial test to confirm the original diagnosis and rule out the possibility of an earlier false-positive result (this is especially true of cats that were less than sixteen weeks’ old when they tested positive for FIV). It is also wise to have your cat tested the second time using a Western Blot-type of test for the best accuracy.  While the tests done in veterinary offices is very sensitive, it can have false positive reactions.

Most cats with FIV can live happy, healthy lives and bring you many years of joy. Do take the following precautions, however:
Cats with FIV are special cats who will do best with owners who can closely monitor them for signs of illness and provide them with lots of love. In return, these owners will gain a loving pet who should provide years of amusement, affection, and companionship.
Letrisa Miller DVM has a feline-centric practice in Manchester, Conn. Connecticut Feline Medicine and Surgery