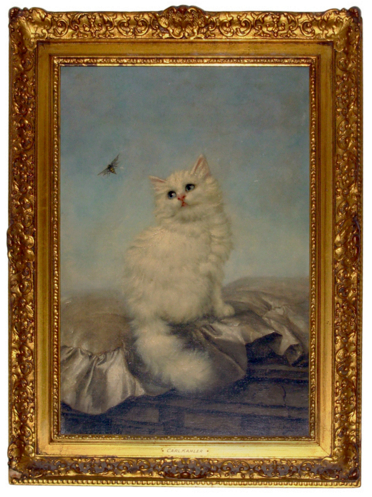 The news of a cat painting “My Wife’s Lovers” a portrait of 42 cats sold at auction at Sotheby’s on November 3, 2015 for a record-breaking $862,000 is taking the Internet by storm. Whenever a news item like this goes viral, facts can blur into fiction or be exaggerated. I love digging deep to find the truth and found it trawling through old newspaper clippings from 1880s and other archives to share the truth about painting, the cats, the painter and the millionairess widow who commissioned the painting. 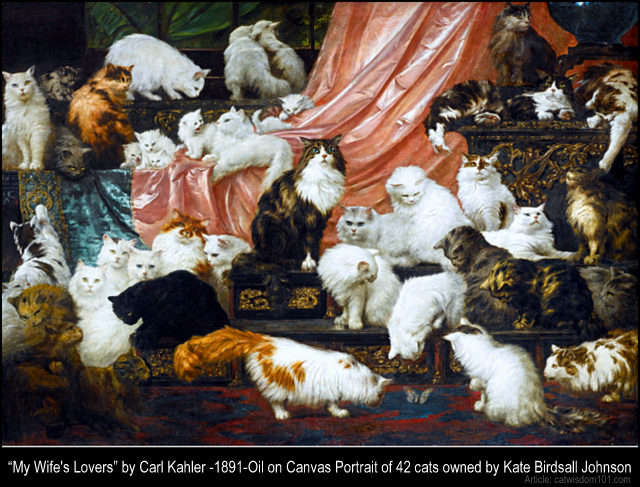 20 Odd but True Facts and other Tantalizing Kitty Tidbits 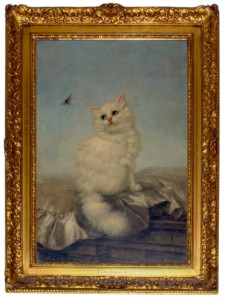 3. During the auction in New York, a bidding war quickly escalated in 2 minutes to winning bid of $ 680,000 (hammer price). The final price of 826,000 includes the buyer premium to Sotheby’s.

4. The buyer, an anonymous collector in Los Angeles is quoted as saying, “I purchased My Wife’s Lovers by Carl Kahler based on my mother’s fond memories of the image.I bought a print of it for her, and it hung in her living room until she passed away at 91. Its California history made it all the better.”

5. In 2002, another auction took place in Boston for “My Wife’s Lovers,” expected to fetch between $450,000 and $750,000 but failed to meet its reserve price. The owner, Kaja Veilleux, an auctioneer and owner of Thomaston Place Galleries in Maine and sold it privately in 2005.

6. Cat Magazine called “My Wife’s Lovers” “the world’s greatest painting of cats” in 1949.

7. The painting is a composite of numerous sketches done over time but not the three years widely quoted. The sketches began in 1891 but the completed painting was exhibited in 1893. 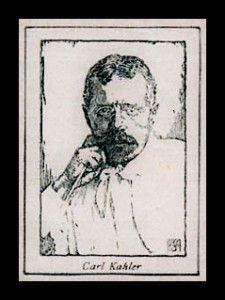 8. The artist, Carl Kahler, born in Linz, Austria in 1855, studied art in Italy, Paris and Munich, enjoyed early success known for portraits, nudes, interiors, equestrian and other sports events. A born adventurer with dramatic flair, he lived in Australia to great acclaim until an economic depression drove him to the New York and San Francisco. He replicated his exotic studio from Melbourne to San Francisco in 1891 where the local press called him “an erratic genius” who asked enormous prices for his art and would destroy a painting if it didn’t suit him. Kate Birdsall Johnson met with and immediately commissioned a large portrait of her 42 cats for $5,000 and numerous smaller portraits despite having no experience painting cats.

9. The philanthropist, art patron and cat lover Kate Birdsall Johnson was born in 1833 in New York and moved to San Francisco to marry Robert C. Johnson from a wealthy family who made their fortune from mining. Johnson was no crazy cat lady but ahead of her time as a cat fancier as cat clubs and shows didn’t exist until the late 1890s. The Johnsons owned several properties but their summer property, a three-story Gothic Victorian in Sonoma County is where most of the cats lived. The large estate was purchased in 1878 from the bankrupt Buena Vista winery which was revived in 1949 . The lavish mansion the Johnsons built and named “The Castle” burned to the ground in 1927. After Johnson’s death, the painting sold at auction for $500.00.

10. The cats: Johnson owned no more than 50 cats at any given time and not the reported 350. They were all either Persian or Angoras, popular in European and American cat fancier circles.

11. The favorite was a large Persian named Sultan (featured in the center of the painting) and purchased in Paris for allegedly for $5,000. However, the only documented pricey cat during this era was Royal Norton, purchased for $3,000 and lived in Los Angeles.

12. The cats were pampered by servants and amused (we call it enrichment today) with aquariums and exotic birds like parrots and cockatoos. 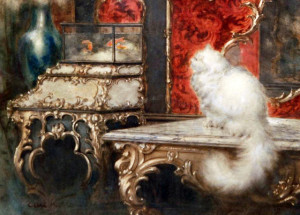 13. When Johnson, died in 1894 at age, 61 of pneumonia there were only 32 cats in residence. Allegedly, a few escaped and turned feral. One Sonoma resident and former winery tour guide claims to own a descendant from the feral colony. With the estate tied up in probate court, the cats languished but eventually moved out. While Johnson did leave a bequest for posthumous cat care, it was not the reported $500,000 but about $20,000. She inherited an estate just under 2 million.

Love and Loss and Cats

15. Mrs. Johnson may have had a reputation for being eccentric but she was devoted to her husband. When he took ill in Paris on a journey abroad, she immediately traveled to be with him, staying at his bedside until he died. It’s possible she purchased her favorite cat Sultan in Paris at this time.

16. The Johnsons’ adopted daughter Rosalind, their disabled and only child died of tuberculosis a year after her father in 1890. Now a widow and childless Johnson sought comfort with cats. Within months she meets the artist. Johnson, a passionate art collector was also amateur painter who had studied locally with William Keith. It’s unclear whether Kahler lived with her during the extensive sketching and painting period. Portrait of a young girl (mutualart.com) by Kahler shows a girl with cats from that time period. Perhaps Kahler painted it as a memorial of Rosalind?

17. It’s unknown what happened between Kahler and Johnson after the the painting was completed but she died of pneumonia on Dec. 2, 1893.

18. The painting survived the great earthquake of 1906 but the artist, Kahler did not and died at the age of 51.

19. Sotheby’s created a video about the painting to spark interest which may have helped the sale succeed. These kinds of videos, aimed at collectors usually have minimal views but this one already has over 14,000 views.

20. “My Wife’s Lovers” may be the world’s largest cat painting but it’s not the most expensive as widely reported. The most expensive cat painting sold at auction at Sotheby’s in 2006 for 95.2 million to Bidzina Ivanishvili, the billionaire businessman and the former Prime Minister of Georgia is Dora Maar With Cat by Picasso painted in 1941. It depicts a small black cat with Dora Maar, Picasso’s lover at the time. 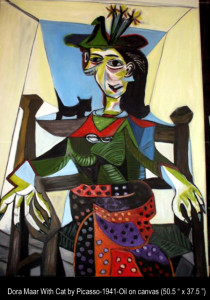 Fancy a Kahler portrait at a more affordable price? A portrait of a tuxedo cat is currently on sale of $10,000 Malleries Galleries

If you can’t afford a real Kahler meowsterpiece, you can snag a 21st c. version of “My Wife’s Lovers” for mere 40 dollars, like this fun iPhone case from FineArtAmerica.

Liked this article? We have an extensive archive vintage cat art, black cat art and other feline-related art and culture.

Update: We pride our selves on being ahead of the cat culture curve. Long before the explosion of cat conventions and events, we planned a fully immersive cat cultural experience of art, film, video, products, crafts, entertainment and cat experts at Cat Film Fest at Sea, Our Cat Wisdom101 cat culture Caribbean cruise was set to sail on Oct.29, 2016. We ran into unforeseen circumstances and shelved the mammoth project. As of 2018, no one has created it but it inspired others to create other cat fests. It’s no secret that major brands and bigwigs in the cat industry possessed our proposal. There is much water under the proverbial bridge and many lessons learned. The biggest one is about trust and the need for a a strong team. It’s a miracle that one person almost got this baby to sail. It’s remains a dream to see this cat cruise sail one day. 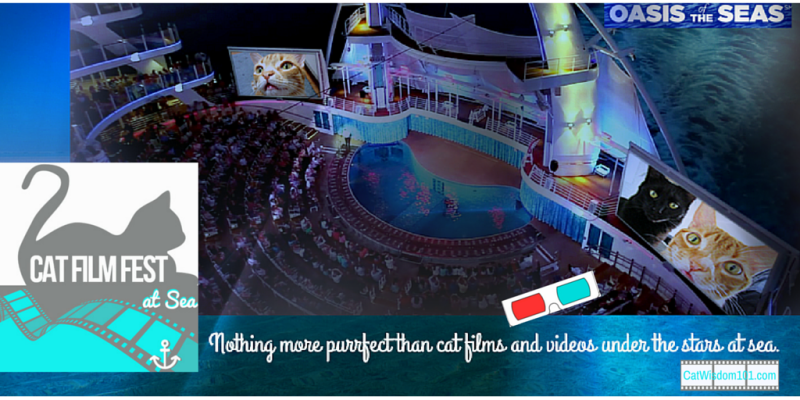