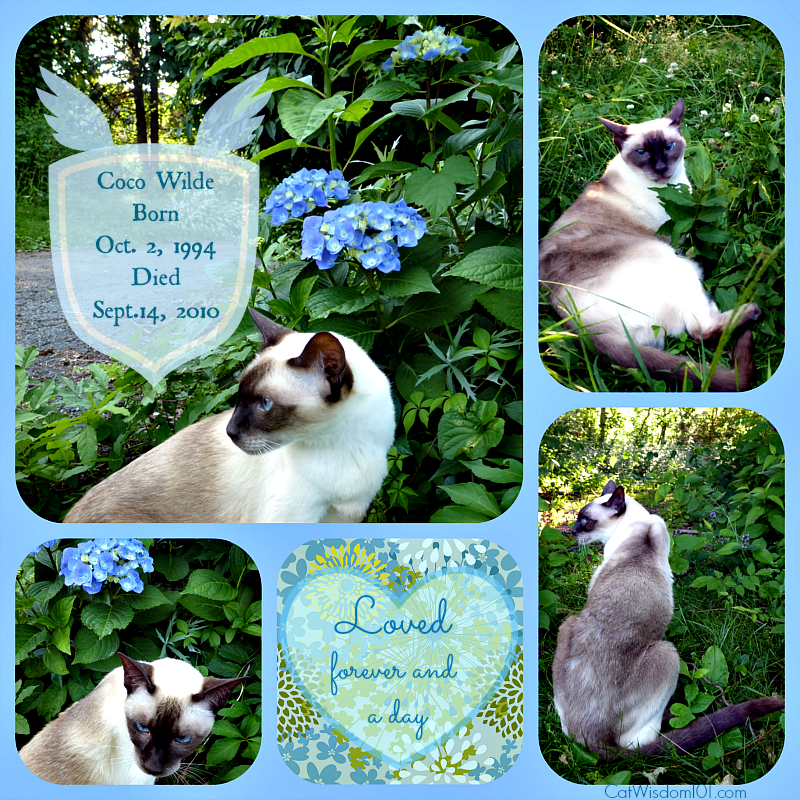 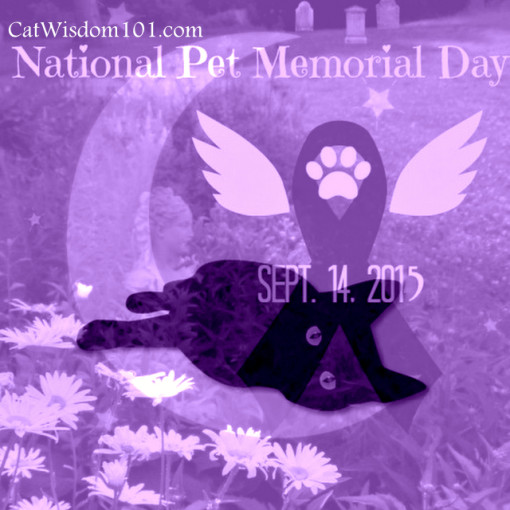 It’s National Pet Memorial Day, not that cat lovers need a holiday or reminders to remember. If you’ve loved and lost a special cat, you remember them often. In time, the memories shift and fragment. They fade but can be brought back in a flash with a photo or a whiff of a scent.  Some cats cling to our souls and others less so. Today is the 5th anniversary of Coco’s death. She was Merlin’s sister and you’d think given my attachment to him, I would have mourned Coco long and deep but I didn’t.  Part of the reason was her beautiful euthanasia and ceremonial burial in the garden. She loved the garden as all our cats do and my grieving process, while profound only lasted a couple months.

Grief, the trickster of emotions has a way of resurfacing and muddling old emotions with new. When I searched my photo archives for images of her last summer I found some I hadn’t seen in years.  I still can’t believe how good Coco looked at age 15 with no hint she would be dead of kidney failure 2 months later.  She gave no clues that anything was wrong but cats are masters of hiding symptoms.  I noticed she was spending more alone time on the love seat in my dressing room but she’d always loved that spot. Then I came across a photo of our dear Radish who died 12 weeks ago sitting on the same love seat just before he died and a wave of sadness came over me. 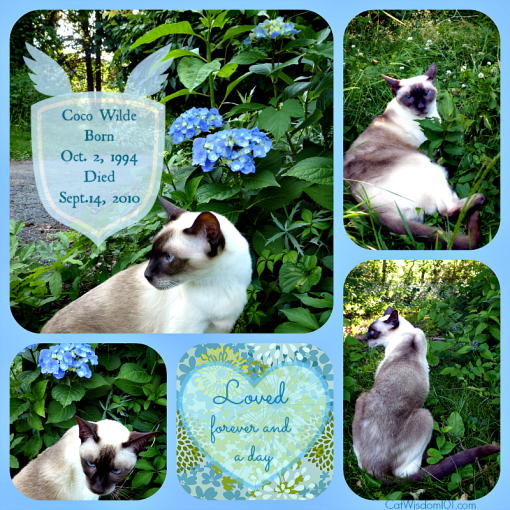 For years no one ever sat on the love seat except Coco and Merlin. After she died he stopped. Odin liked it for a while and then stopped. Domino and Gris Gris never liked it and neither has Nou Nou. I’d toss worn clothes on it not expecting it had much use. When I found Radish snuggled on some of my clothes my heart tore in two. It was so sweet but I took it as a bad omen. Then I noticed the photos of Coco were taken a few feet from Radish’s grave. More tears. I thought I had mourned Radish but I have lots more to process. I still haven’t been able to remove the makeshift memorial in the bathroom and I’m avoiding visiting his grave.  Very busy people like me sometimes use the busyness to avoid grieving. I like to think it’s on hold for awhile but I don’t recommend it.

Unfinished grief comes out in so many sneaky ways like illness, accidents, feeling really tired.  Come to think of it I’ve been extremely tired.  I could blame a hellish schedule but it’s probably time to listen to the wisdom of the body and feel the whole garden variety of feelings. 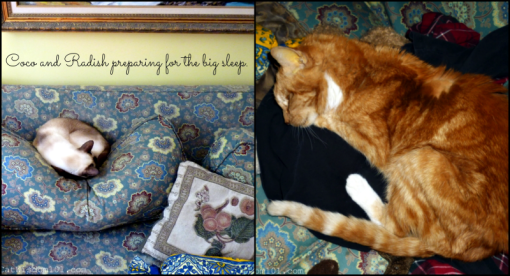 Radish, the mystical magic cat continues to make his presence known in odd ways. I tried making a collage of his photos six! times and my Chrome browser kept crashing.  It’s the middle of the night and I have to occasionally sleep so I’ll take that as a sign to stop. I’ll try later tomorrow.

I live down the road from the oldest and most beautiful pet cemetery but have buried three cats in our garden.  It’s a personal preference as is all is things related to pet loss and grieving.  I like being reminded of  my dearly departed cats by simply looking out the window and seeing  their resting place.  The hammock, my favorite summer spot for kitty cuddles with Merlin is about 20 feet from Gris Gris’ grave.  It’s where Merlin will be buried. Some might find it morbid but I find it comforting and helps me stay in touch with the natural cycle of life. We’re lucky in New York state we can bury pets in our garden.

I often drive by the Hartsdale Pet Cemetery and if you’re in the area, they’re doing their annual blessing of the animals on Sunday, Sept. 13, 2015 at 1 pm. For a cemetery, it feels peaceful as most do but also oddly happy and hopeful.  I have a friend who says she wants to be buried there with her cats and I understand why.  No matter what the season, every corner of the grounds is immaculately maintained with flowers on most of the graves.  Of the 75,000 graves 700 are humans cremated with their pets ashes.

A couple weeks ago when I stopped by a funeral was going on. I respectfully kept my distance and didn’t take any photos.  Several mourners wiped away tears while a man officiated. I couldn’t hear his words but didn’t need to. The love and honoring of a pet with the same dignity as a human brought a few tears of my own.  Are you honoring any deceased pets today and would you want to be buried with your cat?  I found a useful link to individual state laws regarding carcass disposal.

And while not mentioned in the title,  we’d be remiss not to mention our dear Gris Gris who died in 2013. 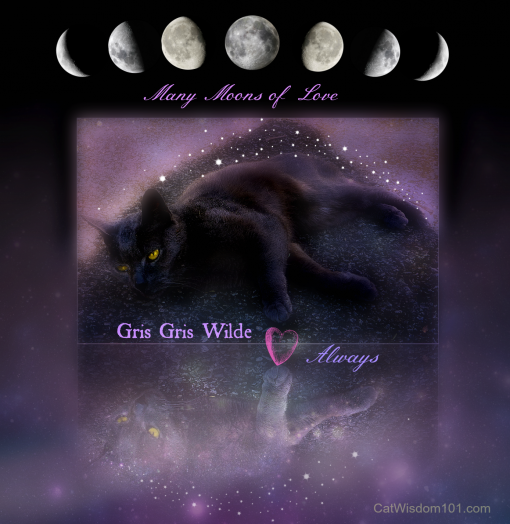 There are many other pets who have graced my life, but I choose to focus on the cats who contributed to this blog since launching in 2011. That said, I’ll always remember my first kitten, Smokey and the many cats, dog, turtles and hamster who turned me into a life long animal lover and advocate.