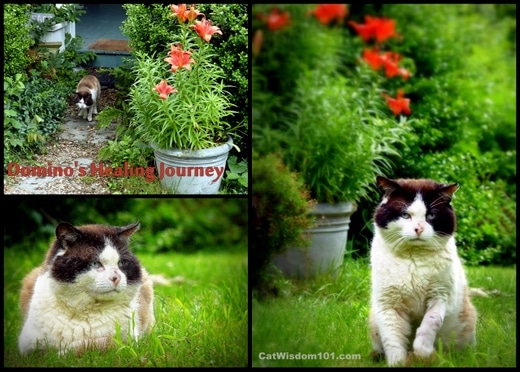 A couple of weeks ago we finally lured him inside a large carrier. Slam! The door locked, we high-fived and waited for our mobile vet to arrive. Just as suddenly, Domino found his inner Hercules, rammed against every corner until a bolt loosened and he blasted out to freedom. Undaunted, we knew we needed help for Operation Domino requiring a village. Ingrid King from Conscious Cats did long-distance Reiki. I did Reiki and other energy healing from as close as he would tolerate. Jackson Galaxy sent his homeopathic essence for stress and Feral Cat Rehab. My private healing group via super intuitive Laura Day sent healing. Our mobile vet Rich Goldstein from Mobile Vet Squad agreed to come on short notice. Countless friends and fans rallied support. At one point, he seemed to improve after the abscess burst and drained, but he still wasn’t putting any weight on his left foot. It was time to have a serious talk with him but would he listen?

I connected with his heart and conveyed verbally and non-verbally of what needed to happen for his health and life to improve. During intuitive work I often physically pick up on an animal’s feelings and this time my heart hurt. I could feel his sadness, pain and weakening resolve. Tired of being ill and lame, he agreed to finally allow himself to be caught. The next morning we set out a drop trap and sure enough, this time he simply walked inside to grab his dinner. Success. Finally! No wait, the trap opening wouldn’t fit the transfer cage. With the already vet on his way, we had to find a transfer cage and fast. I called Sarah Hart from the nearby private shelter Cat Assistance who raced with a transfer cage with guillotine doors. Going from a large trap to the smaller one, Domino let out the most mournful cry, “You got me now. Please go easy.”

Dr. Goldstein and vet tech Lisa, expertly transferred Domino from the drop drop into the transfer cage. Odin watched wide-eyed through the door at the commotion.

Dr. G. attending to D. in the fully equipped clinic.

Now the diagnosis: get out your hanky. Domino’s leg was dislocated and the massive infection had spread to all the bones in his leg. It’s a wonder he was able to hobble about. The abscess was lanced and drained but will require 8 weeks of antibiotics and then re-examined.  Wish us luck capturing him again for another x-ray. Worst case scenario? Amputation. Oh, and he’s FIV+. 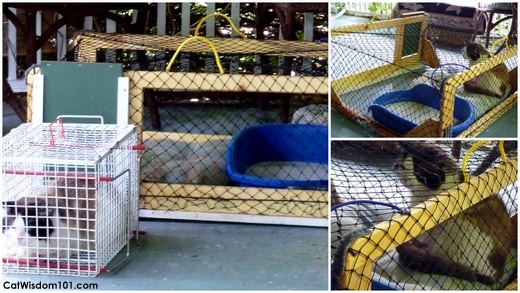 Domino came out of his anesthetic naturally and recuperated for a few hours in the drop trap on the porch. I did some more Reiki on him and then went inside to work. Dr. G called at six to check up on him and Domino had pulled another Houdini. Thankfully our helper cat Gris Gris slipped outside with me and I asked him to help me find him. Sure enough, he led me straight to Domino hiding under  a covered lounge swing in my secret garden (a favorite spot of his). I brought his dinner but he took one look at me in horror and ran away. Maybe he felt it was more than he bargained for. After all I never mentioned neutering being part of the bargain.

It does take a village to help cats. I’m grateful for the healing miracles waiting in the wings, perhaps from you? Let’s envision Domino running on all fours again playing with his pals again. Cat Wisdom 101 isn’t the same without him.

Update: Food rules this survivor. The next day Domino returned to his domain, the porch where all his favorite foods were served on demand. Within two weeks, he returned to his former self and by the end of seven weeks of antibiotics, he made the second biggest decision of his life: he decided to come inside. Wary at first, we kept the front door wide open as he gradually explored one room and then darted out. Every day he explored further afield until he’d sniffed every corner of the ground floor. He’d stare round-eyed at the strange box with sounds and moving images and stairs befuddled him. One wrong move and he’d bolt out the door. Coaxed with treats, he eventually he felt safe enough to climb up to the second and then third floor. The litmus test was closing the front door and then keeping him in overnight. By the time the cool fall weather approached he faced the prospect of either another miserable winter outdoors or a cozy one indoors. You can guess what he chose. 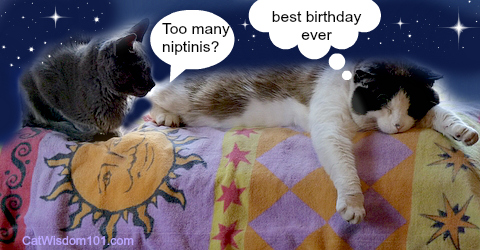 This feral who eluded any kind of touch for years, made up for lost time by becoming a lap cat who makes biscuits and drools in ecstasy every day. Domino loves his cat daddy and is deeply bonded with all his fur brothers. He still insists on going outdoors every day but never ventures farther than the garden and prefers sleeping on soft duvets at night. It’s been a long journey for this survivor and he’s a testament to the power of healing, love, community and patience. 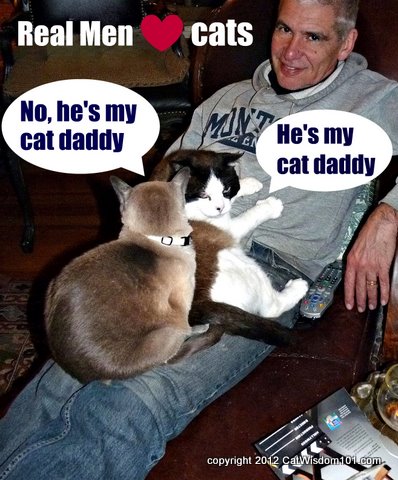