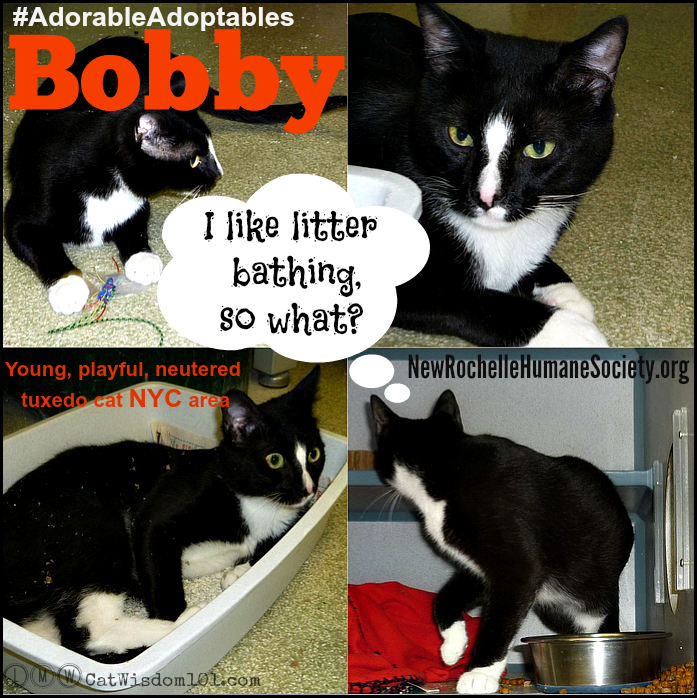 There are many reasons why someone surrenders a cat to a shelter. Litter box issues is one of them. Inappropriate litter box use usually means the cat is not using the litter box. They may eliminate nearby or use the litter for urination but defecation or vice versa. Then there are cats like this week’s shelter #AdorableAdoptables Bobby who likes litter a little too much. He doesn’t eat it. He likes to roll around in it.

If a litter box is kept very clean it’s no big deal. With Bobby, we’ll never know if his messy ways irritated his former owner. Maybe they left him alone all day and didn’t play with him. He plays with his food but shelter cats often do this out of boredom. Like many tuxies, he’s highly intelligent and if not stimulated with play and an enriched environment, he’ll be bored. How could he not be? He’s in a cage without much playtime. When taken out to play his bright curiosity takes over but he prefers to play alone. He’s hissed at all the nearby cats and I’d prefer to see him in a home as a solo cat. He’s a handsome boy with a distinct hourglass spot on his nose and immaculate white socks.

My outdoor cats love a good dirt bath or dust bath. It feels good and when they lick themselves dust-free, they’re ingesting helpful bacteria. As long as it’s not a daily compulsive disorder, it’s normal and natural. For cats deprived of sensory variety like many caged shelter cats it offers a respite from boredom.

The texture of most cat litter will act as a “back scratcher” to provide relief from occasional itching. Itching can also be soothed by grooming with a suitable brush or comb. If the itching is more frequent or intense, there may allergies, a skin disorder, a wound or abrasion,fleas or other source of the itching. When in doubt, see a veterinarian.

When living with multiple cats, there needs to be about one litter box per cat to avoid territorial marking. Some cats will pee or spray to mark their turf but others like to roll around in the litter. Cats have scent glands located on their cheeks, lips, chin, above their eyes, base of their tail, near their sex organs and between their front paw pads. When they roll around, they are able leave traces of their scent marking it as their own. We can’t smell it but other cats clearly can. With bonded groups, it may be acceptable but it’s easier to have more boxes in a variety of locations.

Some cats enjoy certain scented litter boxes. It’s a personal preference and yet most cats prefer unscented litter. There cat litters with attractants or products to add to a litter to make it more appealing. The additives are designed to attract the cat to use the litter box in cases of inappropriate litter box use. Some cats go overboard and are too attracted rolling in it the ways cats do if catnip is sprinkled on the ground.

In Bobby’s case, I suspect it’s a combo of boredom and territory. The box in the photo belonged to another cat temporarily housed in the room but not caged. As soon as he finished his roll around, he sauntered over and gave me a mega bunting head butt, scent marking me too.

Bobby is a perfect example of a healthy, normal cat who needs physical and mental stimulation. Give a home with a variety of places to nap, perch and hide, a person to play with daily and he’ll be happy. For more about Bobby, visit New Rochelle Humane Society

As always thank-you for sharing and cross-posting on social media.