We all know how mysterious and inscrutable cats are, but one man has unveiled another layer of the feline mystique. He is none other than renowned anthrozoologist John Bradshaw, author of Cat Sense: How the New Feline Science Can Make You a Better Friend to Your Pet. His riveting book left me with a million questions but I narrowed it down to ten, which he kindly answered in our exclusive Q & A.

Q + A  with Layla Morgan Wilde and John Bradshaw 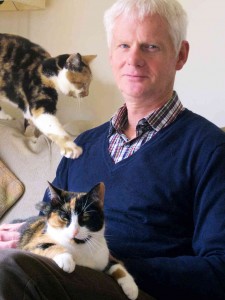 LMW: Despite the deluge of available information on cats from books to TV, why do you think myths and misconceptions about cats persist? What will it take to make a quantum leap forward to improve the lives of cats?

JB: The relationship between man and cat has always been complex, much more so than for the dog. Cats have always had their detractors – as many as one person in twenty instinctively finds cats repulsive – and so they continue to carry the baggage of much negative publicity. For example, cats that prey on wildlife are frequently referred to as “torturers” and “murderers”, despite the fact that the very reason that they were domesticated in the first place was to control the vermin in our farms and granaries. I would like to see such superstitions and misconceptions replaced by a science-based understanding of what cats really are, and how we can help them adapt to the demands that we place on them today.

LMW: Most our Cat Wisdom101 readers are in the U.S. and would love to learn more about the evolution and lineage of cats arriving to North America. Is it true there were no domestic cats in the North America prior to 1492?

JB: Domestic cats first appeared in the Middle East about 10,000 years ago, and gradually spread from there on trading ships, reaching Britain and Scandinavia a few centuries before the birth of Christ. It’s just possible that around 1000 AD Norwegian seafarers may have transported cats to Greenland and thence to Newfoundland, but if so, no trace of these cats has been found. Cats probably first became properly established on the North American mainland in the early 1500s. However, today’s cats can claim a much more ancient connection with North America. It’s thought that about 6 million years ago some North American wild cats, now long-extinct, migrated westwards across the Bering land bridge into Asia, where they eventually evolved into the Arabian wildcat Felis lybica, the direct ancestor of the domestic cat.

LMW: Black cats in the U.S. remain the least adoptable in shelters because of lingering superstitions and yet in other countries they are considered lucky. Why the polarization and is there any correlation between the pervasiveness of the melanistic mutation and a country’s culture?

JB: Not only are black cats remarkably common (given their unpopularity in some quarters), many cats that are not black on the outside carry one, hidden, copy of the “black” gene. A cat has to have two copies of this gene to actually produce a black coat, and hence it’s possible for a tabby father and a tabby mother to produce one or two black kittens in an otherwise all-tabby litter. No-one is sure why black cats are so common, but it’s possible that in the past they made better mousers, able to conceal themselves in the shadows of buildings more effectively than their tabby cousins, whose camouflage was better suited to open country. When black cats, with their glossy coats and striking yellow eyes, first appeared a couple of thousand years ago, they must have stood out from the rest, and so became the focus of all kinds of superstitions, some good, some evil. Some of these myths do indeed persist today, but their origins are mostly unknown.

LMW: One of the most fascinating sections in Cat Sense is the contradiction of Egyptian religious reverence for cats and the lucrative sacrificial cat mummy business. Is there anything you’d like to add not mentioned in the book?

JB: The ancient Egyptians seem to have had an almost schizophrenic attitude towards cats. They regarded their pet cats as important members of the family, much as many people do today, and yet nearby their priests were breeding cats by the thousand for the sole purpose of killing them for mummification and then sale as religious offerings. How the Egyptians managed to sustain such a double standard is a mystery, but it does illustrate how easy it is for us to project all manner of ideas and superstitions on to cats, in a greater variety than perhaps any other animal. Cats’ rather inexpressive faces may be partly to blame for this, making it easy for us to imagine we know what they’re thinking, when in fact we often don’t.

LMW: Can you suggest practical tips for inter-active play with cats?

JB: When cats are playing with toys, in their heads they think they’re hunting. Anything that makes a toy more prey-like will make it more interesting to a cat, especially movement. Cats’ eyesight works slightly differently to our own, and is very sensitive to anything that moves, which is why cats love to chase blowing leaves in the fall. They also like toys that respond to being patted, so (for example) many cats love to play with table-tennis balls, not only because they make a noise when they bounce, but because they’re slightly tricky to catch. Thus interactive play can simply consist of keeping a table-tennis ball moving around the floor, but a toy mouse on a string or a feather ‘teaser’ on a miniature fishing line will also sustain a cat’s interest, because they also tap into the cat’s natural hunting instincts. Cats do like a change, though, to sustain their interest. Unlike dogs, cats don’t seem to see play as a way of socializing with their owner – for them , it’s much more a trip back into their former lives as wild predators.

LMW: In the U.S. there is a growing trend to anthropomorphize our pets and this is influenced by pet industry advertising. Cats and dogs owners are encouraged to be pet parents or guardians instead of owners. How do you feel about this trend and is there any up side?

JB: The idea of being a “parent” or “guardian” may encourage owners to focus on the responsibilities that they have towards their pets, and so can be a good thing for their relationship. “Ownership”, although it’s not a term I have a problem with myself, can imply disposability, in the sense that it’s OK to trade in a car that you own for a newer model. A certain amount of anthropomorphism seems to be an essential part of the relationship between owners and their pets; it is doubtful if we would love them as much as we do if we did not sometimes treat them as “little people”. However, pet owners also need to respect the fact that their pets are animals, with their own distinctive ways of viewing and interpreting the world. Dogs do not understand why their owners leave them every day to go to work: cats do not understand that our attitudes towards their going hunting have changed from encouragement to revulsion, in just a couple of generations. It is we humans who need to make the allowances, because our pets, by and large, cannot.

LMW: Do you feel pet owners who are making lifestyle choices for their pets from spa treatments, vacation and travel, holistic healing like massage, acupuncture and intuitive animal communication, helping them bond with their pets to live happier lives?

JB: The idea that dogs and (especially) cats are members of the family can be taken too far. Dogs are generally strongly attached to their owners and will go where they go: cats instinctively need familiar surroundings and can become highly stressed if moved somewhere unknown, even if they’re with their owners. Few, if any, of the “holistic” therapies now becoming available for cats and dogs have been examined scientifically, and while some are probably benign, cats in particular may find some stressful. In a recent study, high levels of stress hormones were found in some cats while they were being stroked by their owners, so such cats would probably become still more distressed if ‘massaged’ by a stranger.

LMW: As a scientist, you admit there are many aspects about cats that remain elusive and a mystery. Have you observed feline behavior that defied scientific explanation? How do you feel about the growing interest in pet life after death, reincarnation and pet bereavement groups?

JB: Whether animals (or indeed people) have souls that survive the death of their physical body is a matter of belief, and so not really amenable to scientific investigation. Although there is much that we don’t understand about cat behavior, I remain firmly committed to the idea that we will eventually have a scientific explanation for most of it. For example, some believe that cats are capable of grief, but the ability to comprehend the finality of death does not develop in children until they are four or five years old, and is probably beyond the mental capabilities of cats. What we interpret as grieving, say when a mother cat searches for her kittens after they have been homed, may be more easily explained by the characteristic smell of those kittens that lingers on in the house for days after the kittens themselves have departed, almost as if their ghosts were still present. Once the odor that is the reminder of their existence has disappeared, she probably stops thinking about them.You dedicated Cat Sense to your cat Splodge who died in 2004. What did he teach you about life and being human?

LMW: We’d had cats as family pets before Splodge came along, but he was the first to decide to form a special relationship with me – he was supposed to be my daughter’s cat, but once he had passed the kitten stage he largely ignored her and latched on to me. He used to wait for me to return from work, and would rush up to me, purring loudly, as soon as he saw me. He was more of an individualist than any cat I’ve known before or since, and I guess he was the catalyst for my deciding not so much to study cats (I was doing that already) but to try to share what I’d found out about cats with other owners.

LMW: What is the ideal takeaway for readers of Cat Sense?

JB: That just because cats are convenient and uncomplaining pets, we shouldn’t take them for granted. They are individuals with lives of their own, and working out what makes them tick, what they like and what upsets them, can enrich the relationship no end. They are much more adaptable animals than they are often given credit for, but they don’t always understand that we have their best interests at heart, so we need to acknowledge their limitations and help them get around them. To mention just one simple example, trips to the veterinarian’s office for those essential vaccinations can be made so much more pleasant for cat and owner alike if the cat has first been trained to enjoy going in and out of the cat carrier.

Congratulations to  Church Cat Tom and Deb Barnes. You have won copies of Cat Sense. Please look for an email from Layla and Cat Wisdom 101 requesting your shipping address.

17 thoughts on “Q + A with John Bradshaw, Author of Cat Sense”