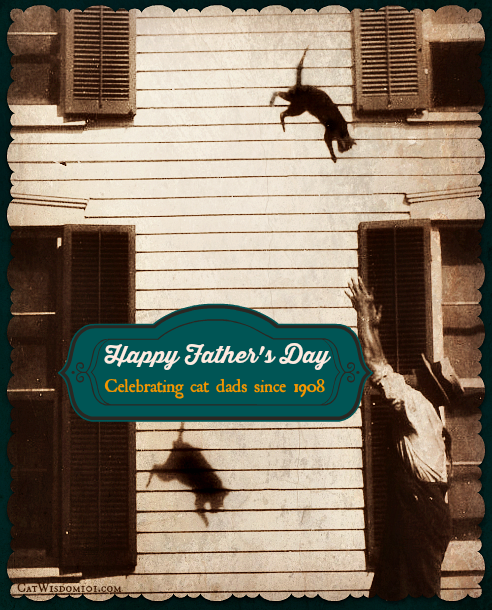 In honor of Father’s Day tomorrow we’re celebrating the men proud to call themselves cat lovers, cat dads, cat parents or cat daddys. The first image is a tweaked image of an antique photo and the second is a modern photo of our cat dad with Domino and Odin made to look antique.

There are more men than ever taking on the label of cat dad but there have always been men who adore cats. I married two cat men and dated many others. If was a deal breaker if they didn’t like cats, and I believe real men love cats. The kind of man who would deliberately hurt a cat, would be capable of hurting their girlfriend, spouse, child or other animal. Are there exceptions? Can we forgive an isolated case of kicking a cat in a moment of fear? Life is rarely black and white, and one complicated cat named Lux will be widely talked about tonight.

Update: After Lux was rehomed to the couple who fostered him, they surrendered him to a vet. The episode was riddled with media spin and clearly scripted.  I stand by my original opinion that Lux’s owners were in it for the money and had no intentions of keeping him. The story smelled of B.S from the start and remains so. If they truly wanted to keep their cat they would have seen a local behaviorist and worked with her vet who offered help for free. They also were willing to provide a foster or permanent home but preferred the deal offered by Animal Planet.

During Jackson’s three visits there was no indication of providing the usual client homework or catification. The only good news is that he is out of a home where he lived a cluttered room with a filthy, too small litter box. I would have liked to see a second medical opinion on his diagnosis before placing him on meds. I see this as yet another case of a cat being exploited by the media for material gain and fame. There was nothing heroic about it. That’s my truth and I’m sticking to it. 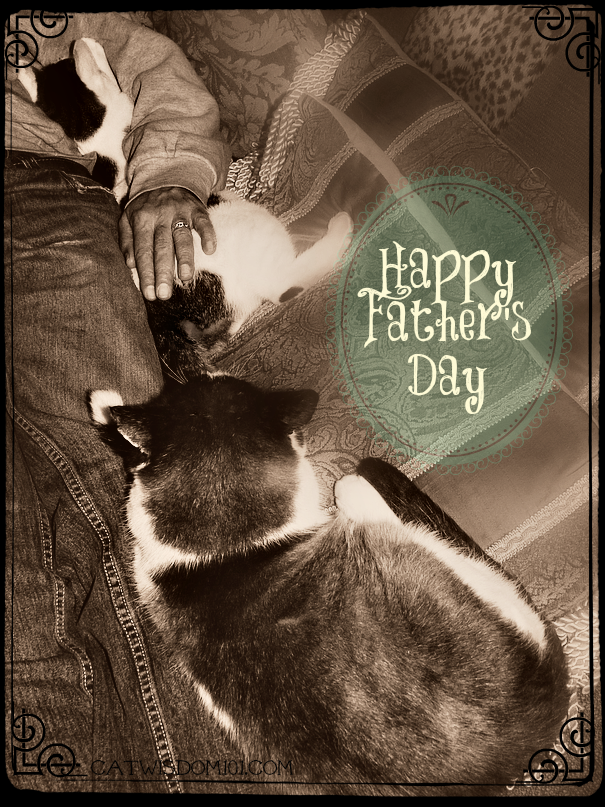 I don’t approve of the sensationalism surrounding Lux the cat famous for the viral 911 call in Portland, Oregon, but I will tune in tonight to watch My Cat From Hell on Animal Planet at 8 PM ET. They’re devoting an unprecedented hour to Lux and his family. While the star of the show, cat daddy behaviorist Jackson Galaxy claims it’s a complicated case, and it is, remember it’s also reality television. Everyone is being paid handsomely. The show’s production company EyeWorks USA is very good at reality television, so much so, Warner Bros acquired their International TV operations for $273 Mil. in February 2014.

Remember also the owners of Lux the cat turned down free help by the Portland-based cat behaviorist who wrote The Cat Whisperer to appear on TV instead. I wrote The Truth About Lux the Cat back in March. Again, I don’t fault anyone. They’re all just doing their contractually mandated jobs. Almost four months have gone by since the LUX media frenzy and I find it odd that there have been no updates or no interviews until this week’s PR surrounding the show tonight. I guess someone signed a gag order. You can bet this was spin doctored making Lux’s owners Palmer and Baker appear to experience a behavioral epiphany. Do I sound cynical? Maybe. Sometimes I hate being psychic. And yes, I have compassion for everyone involved. This is yet another case of cats being our greatest teachers.

I’m hoping for a miracle, a light in the darkness. After all Lux is the Latin word for light. Wait a minute, of course there will be a happy ending. There always is on My Cat From Hell. That’s the magic formula. It’s how brands are created, enhanced and grown. Given the ratings, you can bet there will be a follow-up show. If this truly was the most challenging case in Galaxy’s career as he’s stated, I’d love to see him reach out for some local hands-on support in Portland. No one person can save the world but I believe we can make a difference one purr at a time.

Meanwhile in a less glamorous world, the New Rochelle Humane Society where I volunteer is as real as it gets. The large, cage-free cat room doesn’t have a direct window to the outdoors. The window (seen below) looks onto the entrance and front desk. I noticed a sliver to a real window was visible if I stacked some boxes in a corner. Sure enough Pearce, a handsome ginger and cream boy wasted no time claiming this new spot. I know he’d love to have a cat dad of his own and a big window. He would do best as a solo cat or perhaps in home with a dog.

See another pic of Pearce and please share his Petfinder profile. If you’re in the Westchester or NYC area, there will be an adoption event  TODAY at Larchmont Floral Design for 11 to 2 PM. 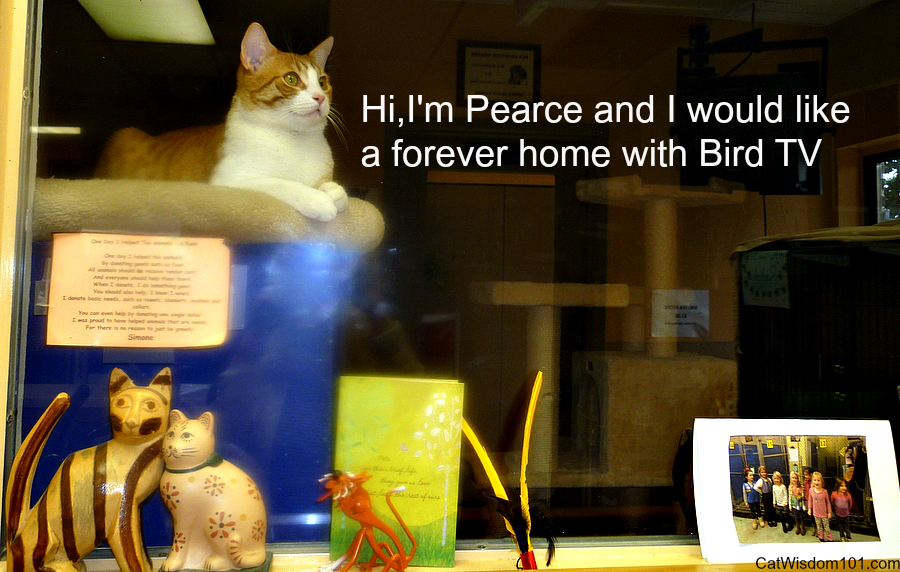 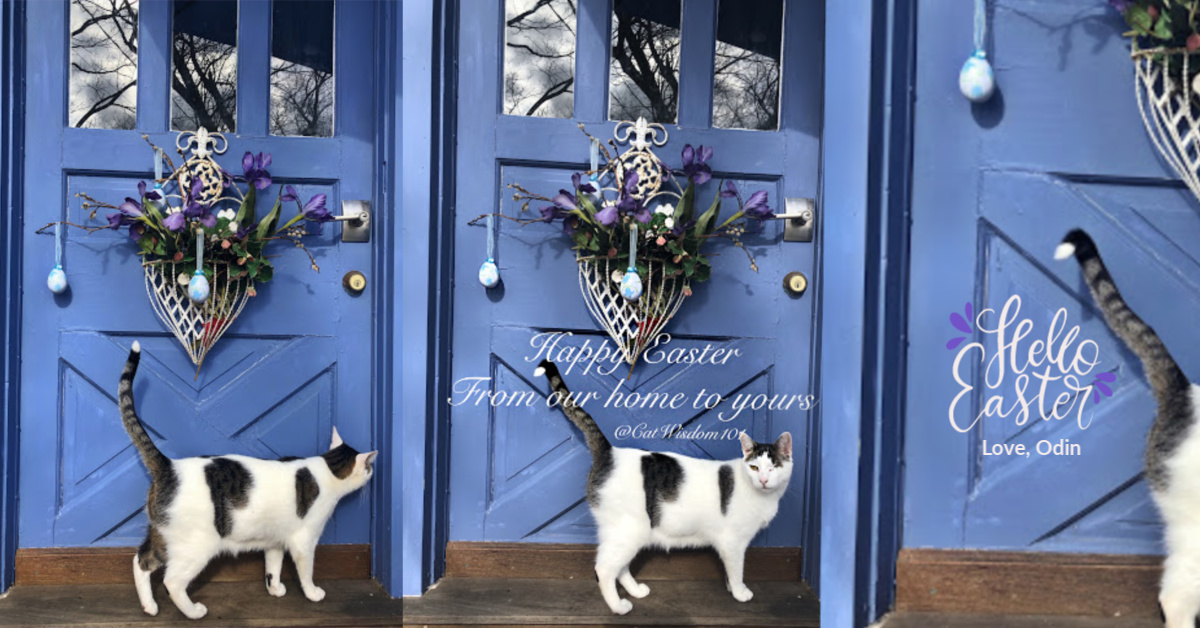 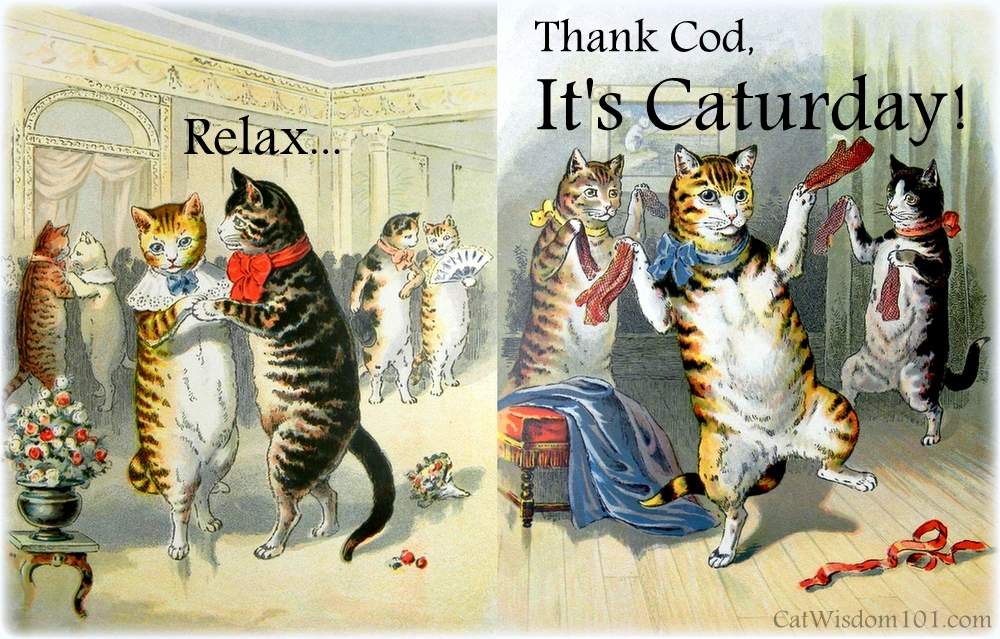