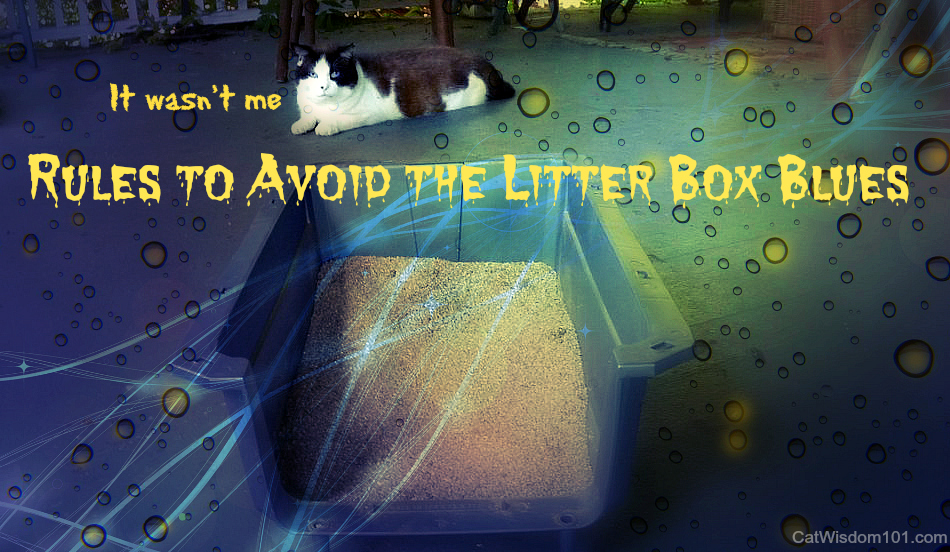 The Low Down on the Pee Puddle

Our guest post today by Letrisa Miller, MS, DVM is about one  peeing out of the box. It’s the most common behavioral issues I encounter as a cat behaviorist and it’s not surprising for the reasons outlined. I’d like to add how important having a litter than attracts a cat is, and to gradually change if switching brands.

Ever wake up in the middle of the night and wonder what that cold wet puddle on the floor is (which you of course noticed after stepping in it)? Or wonder where the wet spot on the couch came from? I expect that most of us cat folks dread that it is urine from one of our feline friends. Unfortunately, for many reasons the summer is often the time of year that cats begin to have issues with the litter box.

Why is that? There are many reasons. The children are home and playing loudly around the cat all day. A new puppy joins the family and the cat has decided that the floor is not a safe place to be. Schedules have changed. Everyone is busy and the box doesn’t get scooped or changed as often. Fans and air conditioners are running loudly. There are guests in the house. The cat’s usual routine is out the window. Many, many possible cat stressors are more common in the summer.

Stress is the most common cause of feline idiopathic (interstitial) cystitis, which is the most common cause of urination outside of the litter box. Avoidance of stress in the household and making sure that cats get plenty of water is the best way to prevent idiopathic cystitis. Water intake is best ensured by feeding a high-quality, high-protein, canned diet. Water fountains are also helpful.

Fortunately, by following a few simple rules, you can often avoid many of the other causes of litter box woes. My most important rules are listed below, but please keep in mind that any cat that starts urinating or defecating outside the box needs a thorough health check-up. The majority of cases in which cats suddenly start to urinate or defecate inappropriately have at least some basis in a medical problem that will need to be solved before any behavioral component can be successfully addressed.

1. The litter box must be in a zone other than feeding and watering areas but still within the cat’s social group area—just not in the core area. (A social group may comprise several cats or even just one cat. A veterinarian well versed in feline behavior or a behaviorist can help you figure out if you have more than one social group in your house.)

2. The litter box must be in a quiet, secure area. Avoid placing the box in noisy areas (laundry rooms, furnace rooms, etc.)dark areas,core area (where the cat eats, drinks, and plays most often, dead ends areas that can be accessed only by stairs,high-traffic areas (particularly where loud people, big or small, are common).

3. The box must be accessible. Kittens and older cats should not have to travel far or up or down stairs. Also, the litter box needs to be positioned so that cats can enter and exit from at least two directions. Example: A box that is between a toilet and cabinet or bathtub has only one way in and out, whereas a box in a corner has two sides for entry and exit.

4. The box and area must be kept clean.

5. Some cats won’t use the same box for both urination and defecation. This means that you might need to provide more than one litter box. Note, however, that many cats consider two boxes beside each other to be one box.

6. In multi-cat households (or any household where the cat might be startled by another cat, a dog, small children, etc.), don’t use covered litter boxes.

7. Avoid scented litter. Cats have very sensitive noses and litter scents often offend them. (Think of being stuck on an elevator with someone that put on way to much perfume.)

8. Don’t place litter boxes in areas that can be guarded by another cat or dog. One of the most common causes of inappropriate toileting in multiple-cat households is litter box guarding by one cat. Dogs also tend to startle cats in litter boxes when they come sniffing for cat tootsie-roll treats.

9. Litter must be deep enough that urine does not pool and cause litter to clump on feet.

10. Litter catchers/litter tracking reducers may cause problems with cats that find them uncomfortable to walk on.

11. Scooped excrement should not be kept next to the litter box.

12. The litter box must be large enough to accommodate the cat.

13. Older, sick, and arthritic cats should be provided with litter boxes with low edges (2″ high) and no more than 2″ of litter for defecation.

14.  If your cat has difficulty squatting and sometimes misses the litter box, “pee-pads” can be placed on the floor around the litter box, or a deep box with an entrance cut out can be used to provide high sides.

The keys are that the cat must be comfortable approaching the box; must feel safe, solitary, comfortable, and quiet while using the box; and must have a safe, secure exit.

Cats are vulnerable while using the litter box, and if they are nervous or frightened they will find a more comfortable place to go.