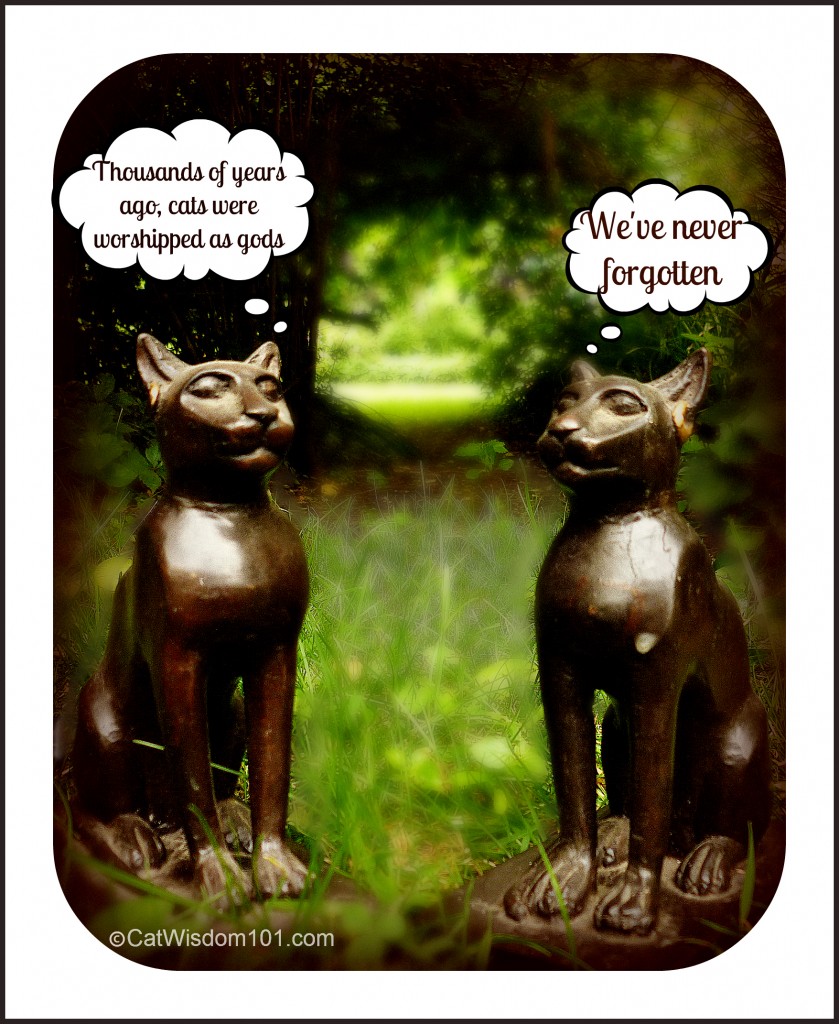 For thousands of years cats have captivated our imagination and hearts; sometimes with fear and evil associations but mostly with love and reverence.

If you’re reading this, chances are you’re a cat lover but if you’ve ever wondered who the earliest cat lovers were, read on.

Cat were first domesticated in Egypt during the Middle Kingdom for their mousing skills and later turned Divine as the cat goddess Bastet, rising to prominence during the XXII Dynasty (1070-712 B.C). Numerous art works were created depicting and celebrating the feline image. The earliest three-dimensional representation of a cat is an alabaster vessel now in the Metropolitan Museum of Art in New York. By the New Kingdom, cats had turned into pampered pets as seen on tomb paintings and reliefs, sometimes seated under their master’s chair or lounging on barges down the Nile.

The cats in the image above are bronze bookends and resemble statuary from the Middle Kingdom. I found them years ago in a tiny antique shop in Paris and had to have them. They are most likely made during the cultural fad Egyptomania dating from the early nineteenth century when Napoleon visited and plundered Egyptian artifacts and then again after King Tut’s tomb was discovered in 1922.

Archeologists have excavated feline images all over the Middle East dating back thousands of years but the most intriguing possibility for oldest cat lover might from the Greek island of Cyprus. Cats were brought or found their way to the island over 10,000 years ago. One cat, perhaps a pet was found buried in Shillourokambos, a large Neolithic village inhabited between 8,300 and 7,000 B.C. next to a human with both their heads facing west. In the shamanic tradition, the west and its setting sun represents death and the place where all thing go to die.

The jewelery, tools, polished stones and other artifacts found in their grave suggest someone of importance and indicating the value of the cat. Burials were important rituals and nothing was random. The cat’s skeleton was found intact, not butchered but with a broken pelvis. I’m guessing some accident happened to these two, and to honor their special friendship they were buried together for spiritual reasons.

Nearby, 24 seashells were found buried with their mysterious significance waiting to be deciphered. Another clue from the excavation site denoting cat/human bond might be the oval stone well containing a sculpture of the head of a half-human, half-feline individual. We may never know the whole truth but the mystery of cats and those who love them continues.

It’s no mystery: we’d love to win a Pettie so our favorite shelter can win $10,000. You can vote daily until June 26 at Pettie Nominations