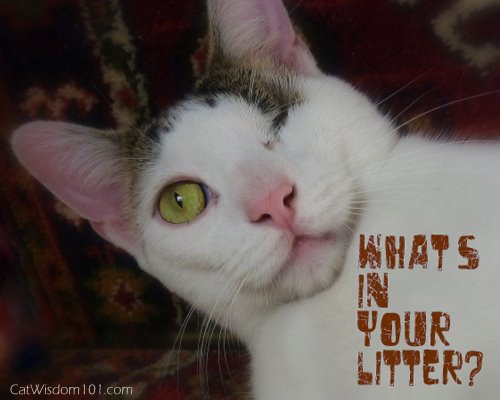 This week’s Vet Q & A is about playing kitty litter detective. But first: a reader follow-up question from last’s week’s Q & A.

Q: I have a question for the good Dr., what about a cat that will ONLY drink water out of the dog’s bowl and NOT his own?

A: Although they won’t often admit it, I think some cats secretly admire their canine counterparts. My cat Weezle hisses and swats at my dog Cooper every chance she gets. Yet, when it comes time to gather ‘round the water cooler, she sneaks right in under Cooper’s chin to imbibe from the water bowl at the same time. Some might see the cat’s drinking out of the dog’s water bowl as a passive-aggressive maneuver (“I will drink out of this bowl because I can.”). I prefer to think of it as a bit of a wink from my cat, saying, “He’s not that bad, but I have to keep up appearances.” Nothing wrong with sharing the bowl – as long as everyone’s healthy. Just keep it fresh.

Have a question for our Vet, Dr. Richard Goldstein? Email it to the editor at Layla@laylamorganwilde.com

We received a free bag of World’s Best Litter to try and Odin happily played guinea pig. This is the only litter made of corn and smells good enough to eat. I like the idea of an all natural biodegradable, flushable litter but would the cats? They weren’t keen on the scent. If your cat is used to a clay-based litter, I would suggest mixing in World’s Best gradually to help them adjust to the difference in smell and fine texture. The company is all about making a difference for a sustainable planet and that’s a good thing. No one at CatWisdom101.com was paid for this review. 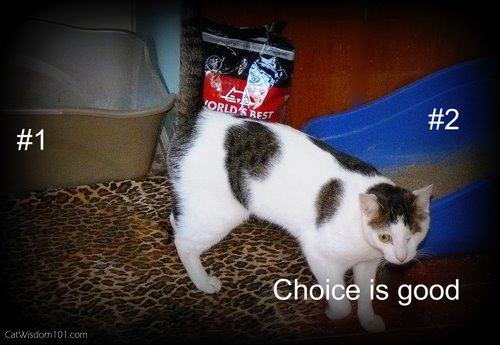 Q: I have three cats and three litter boxes but they share. I don’t know who is doing what where. Without hovering 24/7 how do I know who had diarrhea is constipated or not peeing enough. With clumping litter what is a normal size for urine clumps and how many a day?

Well, Inspector, you bring up some very interesting points. In a multi-cat household where food and litterboxes are shared, determining who’s out of sorts can be a real challenge. Here’s where the subtlety of the job comes into play. I remember when my Grandma used to look at me and say, “Your eyes look glassy.” The next day I’d break with a cold. To Grandma, that was my “tell.” The key here is to learn what’s normal for your cats, and look for little “tells’’
that may alert you that someone requires a little extra attention.

When all else fails, sometimes it’s necessary to separate everyone for a day to fully determine who’s not feeling well.

And speaking of “normal”, litterbox habits in cats can be as varied as bathroom habits in people. Some cats urinate once or twice a day, the size of ping-pong balls. Some cats have bowel movements only every other day, while others may go twice a day. Look for changes. If your cat usually pees twice a day, and is now peeing like a racehorse, or has no pee-clumps in the box, something’s wrong. If your three litterboxes are filling up faster or slower, it may be time to put on your Sherlock Holmes cap and Houndstooth coat, and get to work looking for clues.

12 thoughts on “What’s In Your Kitty Litter?”