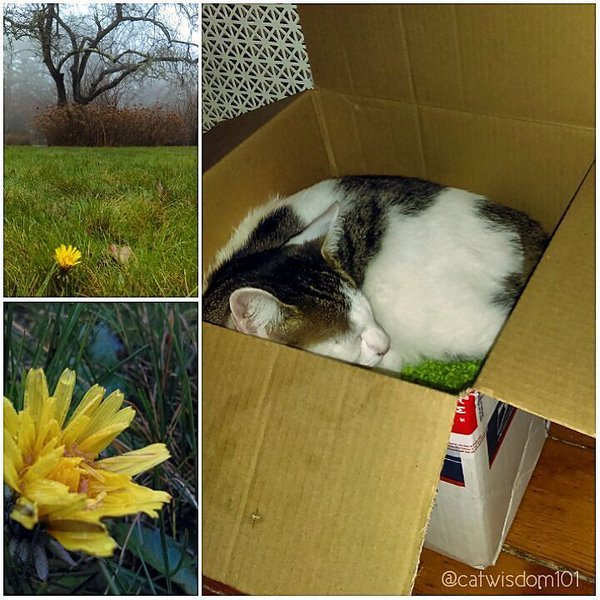 It’s Merlin here recounting one of the weirdest holiday seasons and certainly the warmest on record.  The full moon madness peaking on Christmas eve and spilling beyond Christmas Day into Boxing Day, frayed our tempers and moods blacker than a clowder of Grumpy Cats. That’s not entirely true. There were bright spots like our Secret Santa parcel, not that I got to see it. Odin hogged it in a most Scrooge-like fashion and suffered the consequences of his greediness. More about that in a second. With so many friends on and offline feeling sad, grieving, lonely, ill or injured (more than one friend hospitalized) this was not the year to party and swing from the chandeliers.  The operative word was kindness and doing less without the guilt.

That said, Layla was leaky-eyed with worry and stress about me and everything but hugely relieved the worst is over. She’s going out to dinner with friends tonight for a relaxed zero expectation evening. No gifts, no drama.  The best gift possible happened on Christmas Eve and Day. It was 72 degrees in New York!  The angels were smiling fur sure. Warm enough for the hammock. Warm enough for a garden stroll that pleased me to no end.  Odin ran up and down 22 trees. I even climbed up the stairs all by myself. Now, that doesn’t mean all was hunkydory peachykeen. I’m guzzling water faster than Marilyn Monroe sucked back champagne cocktails and peeing more. My litter box is more miss than hit but I do try my darndest.  I’m on antibiotics as the vet says, “Forever.”  It’s no picnic and you know how I love my picnics, but it’s as good as it gets for my last Christmas.

There’s all kinds of videos and photos floating about on Instagram of me but my mom is forever confusing her android and iPhone settings trying to make everything square and somehow nothing looks the way it’s supposed to by the time it ends up here 🙁  Duplicates pop up on Twitter, HD off and all she wants for Christmas is to sleep for a year or master Instagram.  She has gorgeous nature shots of fog, if you like that kind of thing on Instagram and a holiday gift “7 Life Lessons” at her Boomer Muse blog. Might be a hidden treasure for ya.

Oh yeah, we’re ready to ring in the new year and say sayonara to 2015 but it was pretty darn great in many ways. A mixed blessing you might say. After all, I’m still here, right? Who knows, my dad thinks I’m going to make it to 22. That’s a stretch but strange things do happen like a dandelion blooming at Christmas. That’s a first.

Now on to the Odin episode which is embarrassing to Layla because she’s always harping about holiday cat safety. It’s our third year participating in the Secret Santa exchange with our fellow cat bloggers. This year our parcel arrived from Florida, but there was no card or ID of any kind. Talk about a real secret Santa!

Layla emailed the organizer who was crazy busy and then a friend, Caren from Cat Chat and Cody who pinpointed the Santa by a process of elimination. Yippee, it was the Florida Fur Kids. Odin, who can be boorish as a Viking pillaging the North Pole was only interested in the contents of the parcel. Each of the dozen items were individually wrapped and Odin wasted no time absconding with one in his mouth (video on Instagram). Layla unwrapped the carefully curated collection of catnip toys, container of fishy flakes, and cardboard scratcher with the idea of donating them the shelter. They need them more than we do. The adorable, green fuzzy soft “mancat cave bag” was a magnet for Odin so we figured he could keep it. It lined the bottom of the perfectly-sized postal box for Odin. And we all know every cat considers a good cardboard box better than catnip. Thanks a bunch Allie, Ellie and Raz and their thoughtful human.

Layla opened up the treat container and gave Odin a few of the fine, fishy flakes most cats go bonkers for.  A bonus gift was a pretty notepad organizer thingy for Layla which she is always in desperate need of since she has a horrible habit of scribbling on bits of envelopes even though she has a gazillion notebooks and calendars.

Being a sensible mom most of the time, Layla placed all the toys and treats in the box high up in the laundry closet and closed the door. Later that day, much later, the normally high energy Odin was nowhere to be seen.

He’d somehow pried the door open, squeezed inside the gift-filled and catnip saturated box. He poked his head out from the gift wrap with the classic “I can’t believe I ate the whole thing” expression.

Layla was immediately suspicious. This was no ordinary catnip buzz.  Had he chewed on any ribbon, a sharp piece of plastic or what not? In a panic, Layla pulled the stuffed box with Odin, who felt suddenly five pounds heavier and prayed they didn’t have to rush to an after hours emergency clinic in the middle of a stressful day.  She checked his vitals, nothing alarming except sluggishness and then she found it. The container of fishy flakes had been chewed open and about a third of the container gorged on. At least we now know what Odin’s binge limits are.  The toys and treats were removed to a safe location. The catnip/flake fest combo effect lasted until dinner and no, he did not have dessert!

The following day, I found Odin snoozing happily in the empty box happy and no worse for wear. There was no one to blame but the human. She was harried and didn’t place the box in any of the usual safe places. Life and learn. Never underestimate the cleverness of a cat.

Do you have an nutty holiday story? Do tell!