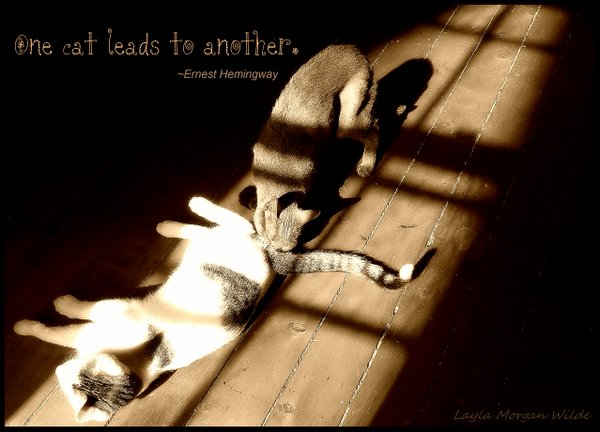 The sound you hear is our tails flicking with excitement. Today is an extra special Cat Saturday. Today is National Cat Day  AND our Gotcha Day for Odin and Gris Gris. Maybe Hemingway was right. Does one cat lead to another? 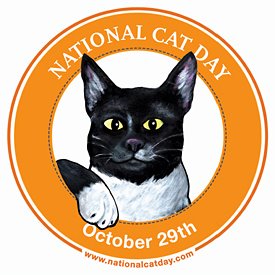 We can hardly believe it’s been a year (and thousands of photos later) since Odin and Gris Gris arrived as foster cats to cheer up a grieving Merlin. Boy, did they ever cheer him up. He’s never been happier and they’ve enriched our lives in unimaginable ways. We have more good news. I hope you’re sitting down. Some of you have been following the escapades of our feral porch cat Domino for three years. For seven years, we’ve tried to get him inside for the winter. He refused all bribes, offers and tricks. We knew the temperature was going to dip near freezing last night. The time had come.

It’s hard to believe it took seven years before he accepted petting. Now he can’t get enough of deep massage and brushing. 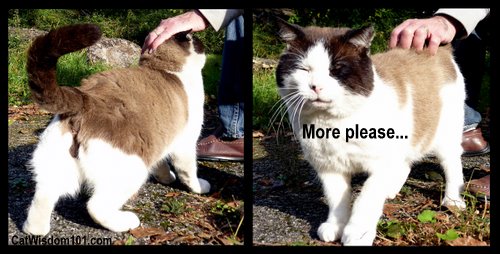 He ate his dinner in the entry hall as usual but this time we closed the door. For the first time he didn’t freak out. He accepted his favorite massage but hid under the dining room table. Odin was thrilled to have his playmate indoors. After a while, he sniffed around the first floor and I nearly fainted when I saw him gingerly creeping up the stairs. In seven years he’s never gone near them. After a brief inspection of the second floor, he lumbered back down and settled under the sofa table for the night.

During the night he cried. I got up to reassure him and in the morning we opened the door wide but he was nowhere to be seen. We expected him to make a mad dash outdoors but I found him near my desk in no hurry to leave. He eventually made his way outdoors but in relaxed fashion, playing with Odin. Today, he’s leery about coming in, and may not do a repeat performance tonight. But miracles do happen…

What a difference a year makes. I have no doubt that Domino’s friendship with the others helped him feel safer. If someone had told me that in one year my beloved cat Coco (Merlin’s sister) would die, six weeks later, two very unusual foster cats would change my life and Domino become formerly feral, I would have said, “Impossible!” The past year has shown anything is possible.

I wrote about how Odin and Gris Gris came to us a year ago http://blog.laylamorganwilde.com/2010/11/05/cat-saturday-foster-fun.aspx

Both Odin and Gris Gris made enormous strides in one year. I’ll be honest: it wasn’t love at first sight with these two, the way it was with Merlin. It took patience, work, trust and time and now our bond is like Crazy Glue. It didn’t take long to fall for these guys. 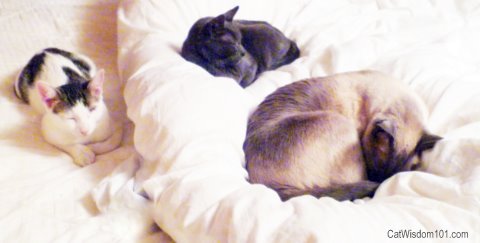 Odin is a natural comic and makes me laugh every day. He also get’s into trouble every day so it even out. 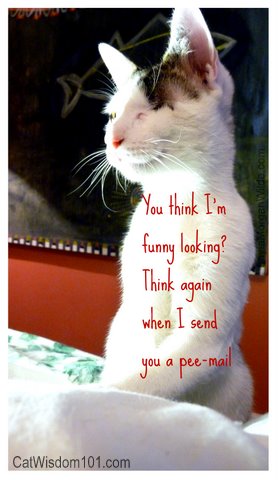 Odin, always confident, grew from cute mischievous kitten to an athletic hunter and tree climber extraordinaire. Scary smart, he’s remains curious about everything and has new tricks up his sleeve every day. This is how he looked at the shelter at our first meeting. 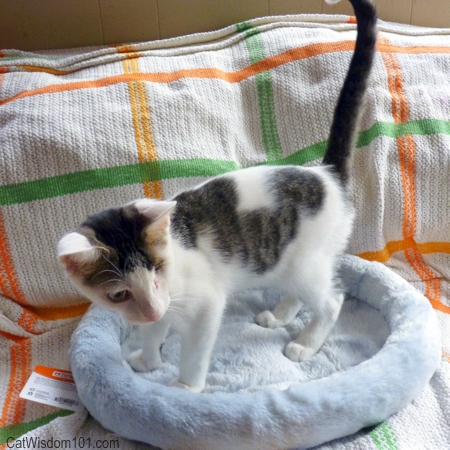 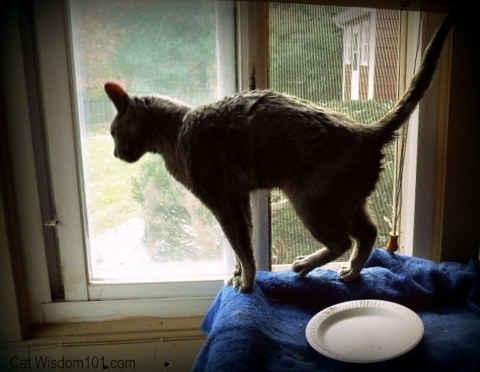 Gris Gris has made the biggest transformation. The photo above is from my first meeting with him at the shelter. It took endless patience before he allowed me to photograph his face. Looking back, it’s clear he was not only unsocialized but never loved. He eluded my camera and early shots allude to his haunted past. 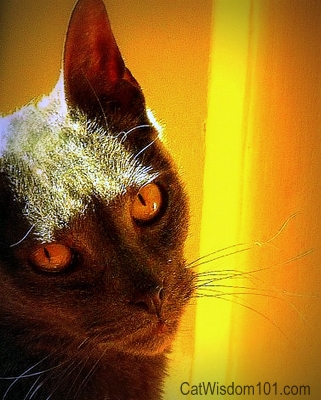 His progress happened naturally and incrementally. It took daily love and communication for him to gain trust. He changed from a skittish cat who avoided eye contact and hated being touched or picked up to one who is relaxed and trusting to sleep near us, who loves being brushed and petted daily. He exudes mystery and grace and when I’m lucky, gives me kisses and goo goo eyes. His coat is now glossy and his demeanor proud and confident. He’s Merlin’s best pal and happy to be his seeing-eye cat assistant. 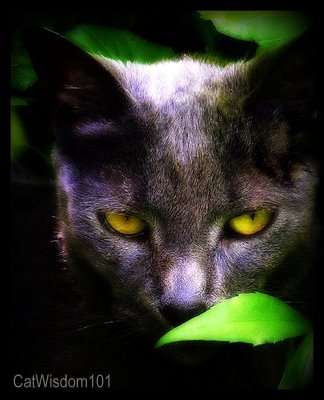 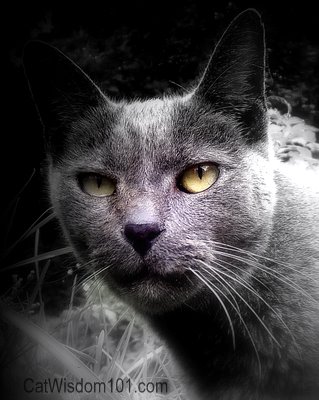 The takeaway lesson from these cats is: Never underestimate a cat. Love heals. Trust takes time, and cats who are allowed to be themselves are pure joy.