I loved the New York Times best-selling cat book I Could Pee On This and shared our funny Q & A with author Francesco Marciuliano last October. The gifted and funny writer joins us for another exclusive Q & A about his latest book, I Could Chew On This: And Other Poems By Dogs. This time he focuses his laser wit on poems written from a dog’s perspective. Yes, dogs. You may wonder how such an insightful a cat lover could switch teams. The secret? He’s a dog lover too. In fact , the book is dedicated to his dog Panda. Marciuliano takes his keen powers of observation to mine the funny and sometimes poignant truth about dogs. Case in point:

Whether you like cats, dogs or gerbils, you’ll love You Could Chew On This. It’s the same size as I Could Pee On This and gorgeous illustrated with doggie pics. The two books are perfect bookends for holiday gift giving and we’re giving away a pair.

The unfailingly polite and perpetually quixotic Francesco Marciuliano spills all with a fun and funny Q & A . 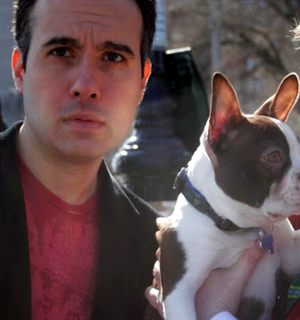 Q. & A. with Layla Morgan Wilde and Francesco Marciuliano

1. LMW: In what way did the huge success of your cat poem book I Could Pee on This surprise or change you?

FM: I can’t imagine it would change me, since having a book with the word “Pee” prominently in the title would if nothing else greatly humble a person instead. But the success has indeed been a very, very happy surprise. I never went into this with any assumptions about the book’s chances or what it would all mean other than the one thought that kept running through my head—“I’m getting my own Library of Congress number thanks to poetry, my cats…and in a small way urine.”

2. LMW: Your follow up book of dog poems I Could Chew On This follows a similar format, look, and feel but the tone is distinctly dog-like. What are the biggest differences between cats and dogs?

FM: Cats are quietly reflectively, almost to the point that if you didn’t pay close enough attention you really wouldn’t know what they were thinking until you found them hanging upside down from your window screen by one claw practically screaming, “I’m living life, Ma! I’m living life!!!” Dogs, however, are far more vocal, far more publicly emphatic in their thoughts, practically wearing their hearts on the sleeve of that poncho you make them wear whenever you walk them in the rain. And that difference shows up in their poetry, so whereas cat verse lets you in on a secret, dog verse is exuberant in sharing why, how, and at what property value they completely lost their mind when you left the house for what seemed like to them either five minutes or fifteen years.

3. LMW: They say write what you know. There’s no way you could have written about cats and dogs so insightfully without experience. Would you call yourself bipetual? Loving both cats and dogs equally?

FM: I know just how calculated this might sound given that I wrote both a cat and a dog poem book, but I’m a cat person. I’m a dog person. I’m a bird person. I’m a goat, turtle, and pig person. I love pigs. I even had to be talked out of getting a small pet pig because I’m socially awkward as it is so maybe I don’t need to be the guy in Central Park walking Babe. But my hope is that one day soon I can volunteer at a wolf and/or elephant sanctuary. By the way, I did not just list the next several pet poetry anthologies. Rather, I think I just depicted my home life in the next few years, a prediction that may cause some concern on the part of loved ones and/or my landlord.

4.  LMW: The cat is out of the bag. You have loved dogs and dedicated the book to the dog you loved for 17 year, Panda. What did Panda teach you about love and life?

FM: Panda was an extremely loving, loyal, intelligent dog that no one could ever forget. She was calm, she was inquisitive, she was always willing to sit by your side, and she only once made a play for food at the dinner table, but she made sure that one time she went for the most elaborate meal possible. And as with all pets she reminded me never to caught up in my own thoughts or concerns, to always remember not only others but all creatures. And that is the greatest lesson about all pets, that they teach us not only the true value of love from their affection but also never to forget others and realize that humans are just a part of this earth, we’re not the only attraction.

5. LMW: If you had a one-way ticket to a desert island and had to make a Sophie’s choice, would you take a cat or a dog?

FM: I’m going to completely cop-out of this question by making certain I always buy a round-trip ticket so I can get home to any and all pets.

6. LMW: You write both webcomics and books. How does the writing process differ?

FM: Well, with the comic strip “Sally Forth” I’ve been doing it for over 15 years and the characters have become family, so that when I think of a scenario I have a pretty good idea of how each will respond and how they will play off one another. And I think that helps because I’m a strong believer that the best comedy is not based on set-up but rather character interaction. As for the books, there is something similar in that I’m also writing about family, this time in the memory of my pets. And thanks to the absolutely joy that comes with having so many memories of my cats Boris and Natasha and my dog Panda I can imagine what lunacy they might get caught up in and how they would either try to rationalize it or explain their way out of it. As for the webcomic “Medium Large,” that basically comes down to “Well, that sounds like a demented idea that would be fun to draw.”

7. LMW: What’s the funniest thing that happened to you at Comic-Con?

FM: A lot of Comic Con was running around between book signings to try and see as much as possible. This negated camping out overnight for such huge events as the Doctor Who or various Marvel superhero panels, unfortunately. But I did get to see a few celebrities including Gillian Anderson, Bryan Cranston, and even Loki himself. (I really should say Tom Hiddleston instead, since I’m quite certain he is not always in character.) And I managed to see some extremely elaborate and imaginative costumes, as well as several people dressed as “Minecraft” characters thanks to placing a cardboard box on their heads. I’m not sure anything specifically hilarious occurred, but I can say that I had a fantastic time, the people at the Chronicle Books booth were a joy to be around, and if you ever go to Comic Con make sure your costume does not involve holding more than one staff/weapon/obscure sci-fi reference, because that will greatly limit your ability to take photos, purchase keepsakes, or even eat.

FM: I figure the next book should be “Poems by Voles and Hedgehogs for British Gardeners.” After all, the best way to break wide is to go as niche with your audience as possible, right? Right?

I Could Chew on This will be released by Chronicle Books on July 30, 2013. Visit the author at Francesco Marciuliano

To enter our giveaway: simply leave a comment at this post. For extra chances to win, social media share and mention in another comment where you shared i.e. I shared on Twitter with the hashtag #giveaway. This giveaway is on until August 10, 2013 11:59 pm and open to residents of the U.S. The winner, selected randomly, will be announced on August 11. If you can’t wait, snap up a copy now.

Disclosure: We received a review copy which in no way influenced our review.

The winner of last week’s big swag bag of goodies from the ASPCA campaign: Say No to Pet Store Puppies

is Michelle S. Congratulations! Look for an email from Layla and CatWisdom101.com.

Pettie Awards voting ends on July 31 and we’d love you vote for us and there are some deserving dog blogs too! Pettie Awards Voting Link 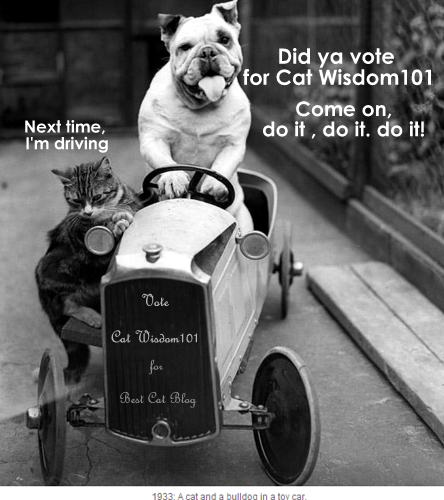 30 thoughts on “I Could Chew On This: Author Q & A, Review and Giveaway”