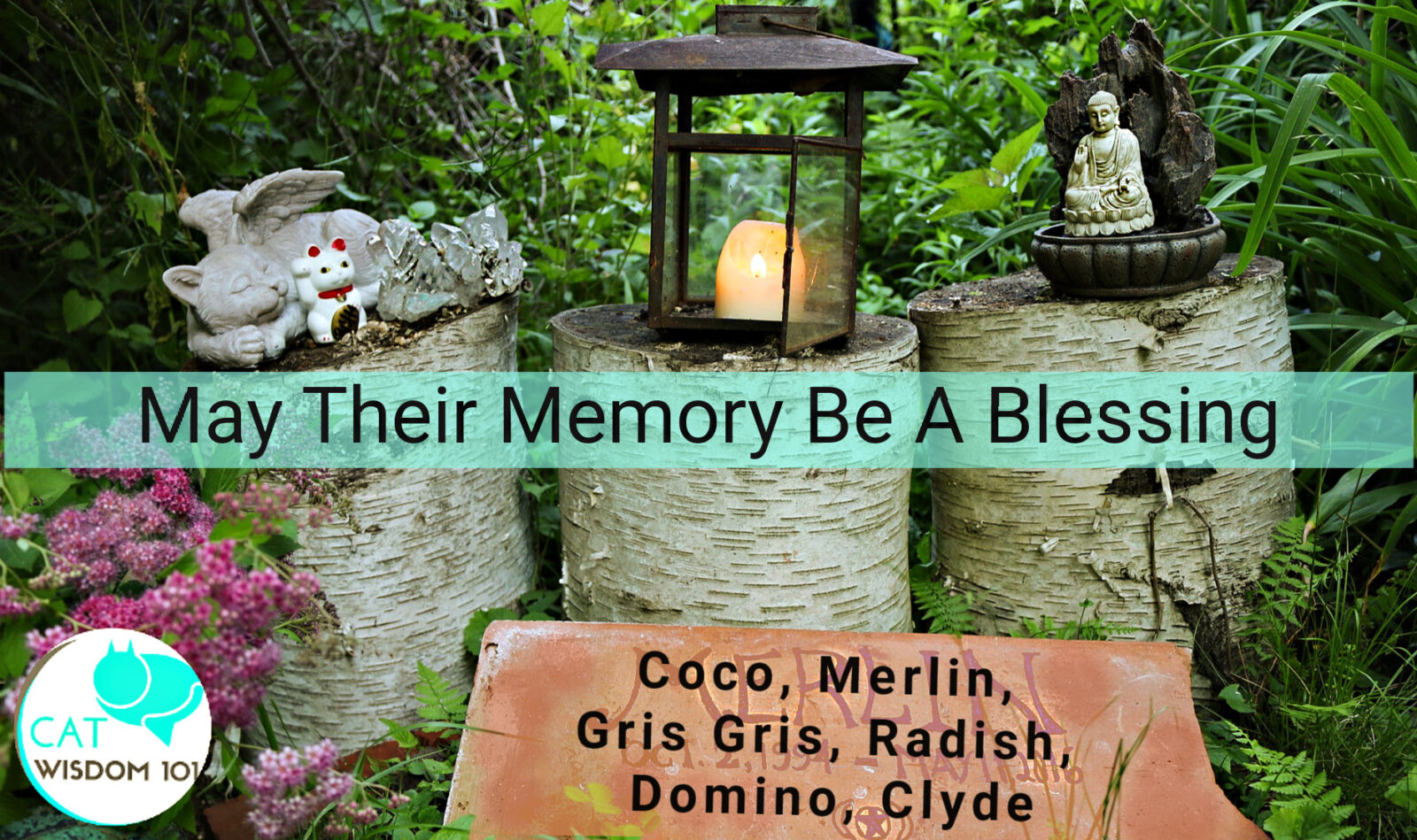 In honor of Rainbow Bridge Remembrance Day celebrated today, I have an unusual tale about my OTRB cats. Way back in 2012, we held a One-of-a-Kind Kitty Bowl Giveaway   Our custom bowl included the names of the original Cat Wisdom 101 cats: Merlin, Domino, Gris Gris and Odin. Odin is the only remaining cat of the group. After countless washing by hand and dishwasher it acquired few chips but fired ceramic bowls can last hundreds of years. 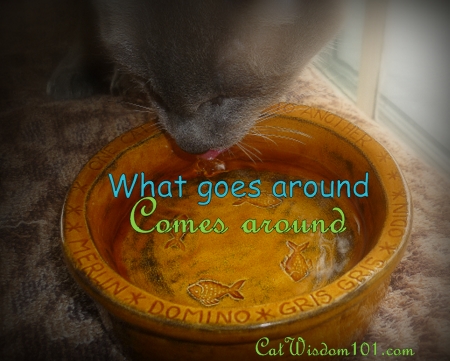 The bowl became Nou Nou’s favorite until a few weeks ago when whoops, hubby accidentally dropped it. It cracked in four pieces. I thought it odd that, three of the dead cats’ names were on one piece and Odin’s was on another. The broken shards sat on the counter. The bowl has such sentimental value, I didn’t want to throw it out but I didn’t think it could be repaired. When in doubt, wait it out. 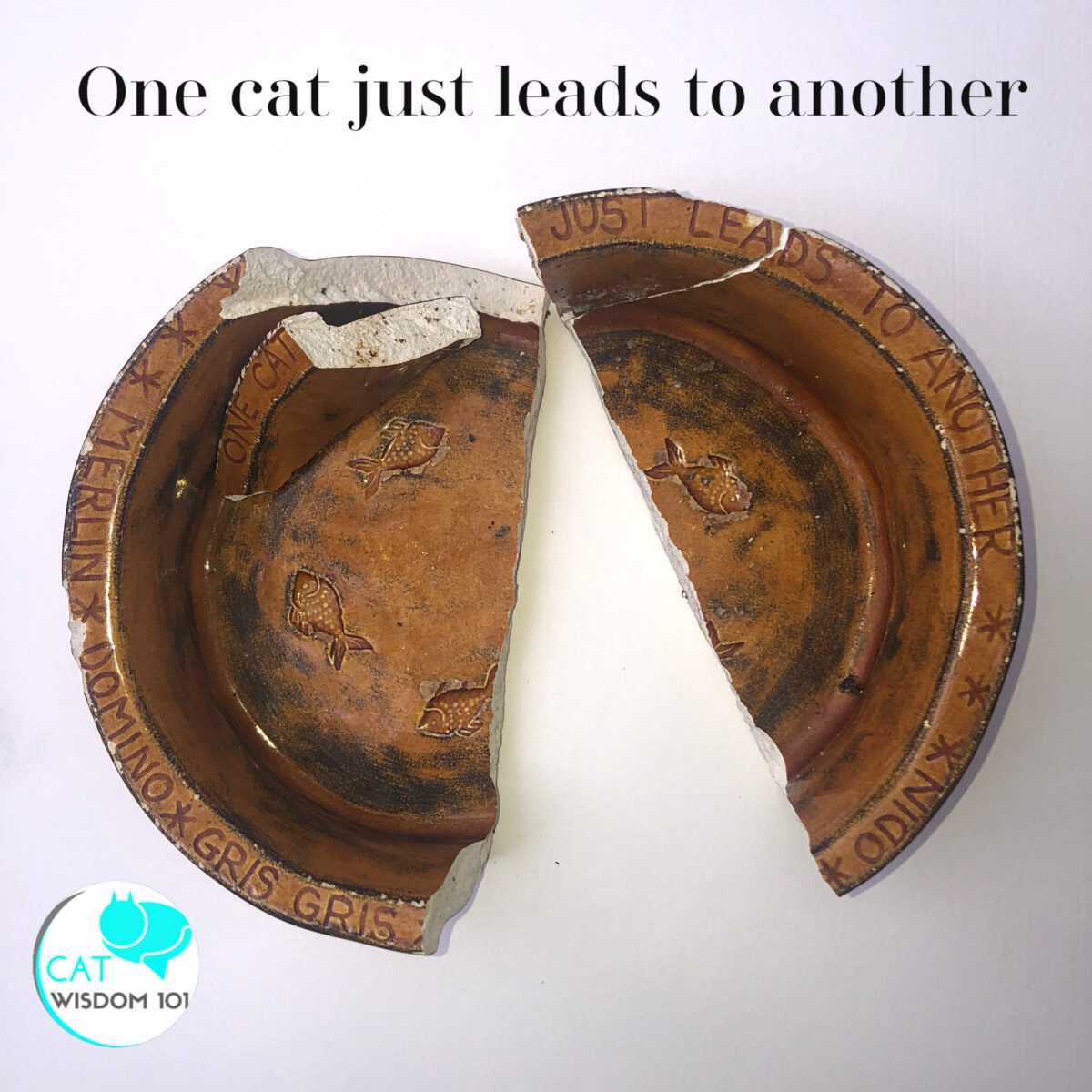 Wait for a sign. Then it happened, Clyde made an appearance. Usually my dead cats appear as flying messengers: birds, butterflies or dragonflies. Just before I decided to write this post, a damselfly landed and wouldn’t budge off my phone until I asked whether I should write about this topic.  The pretty blue-green damselfly looked at me with her big eyes and I took it as a yes. “Okay then,” and off she flew her iridescent wings reminding me how magical every life can be.

We have lots of wildlife on our property but I did a double take when I caught a black furry animal out of the corner of my eye. The first thing that came to mind was a black cat, namely Clyde. The little creature darted by one of Clyde’s favorite bushes and I realized it wasn’t a cat. I had to Google to identify it: Melano Marmota monax, a rare black groundhog. Leave it to larger-than-life Clyde to say hello in his own dramatic way.

It felt a message from a dead cat meant it was time to fix the bowl, not to use it was a food bowl but something else. While searching for some glue, I found Clyde’s memorial paw print, stored as a Christmas ornament. The messages or signs piled up.  By the way, messages from the dead happen more frequently when you stay open and aware. 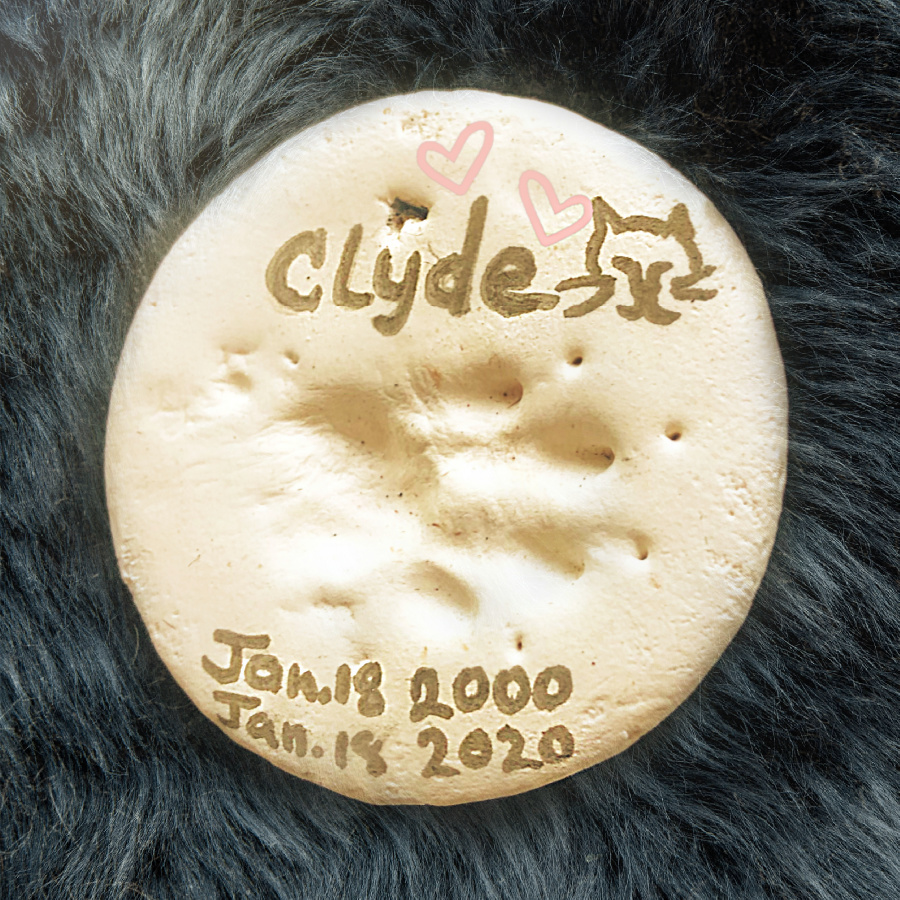 I glued the pieces of the bowl back and decided to re-purpose it as a memorial bowl and place for Odin’s collars. When something is cracked and fixed, it will never be perfect but perfect is the enemy of good. There are as many ways to remember and honor other dead cats as there are cats. There are no rules except what your heart dictates. 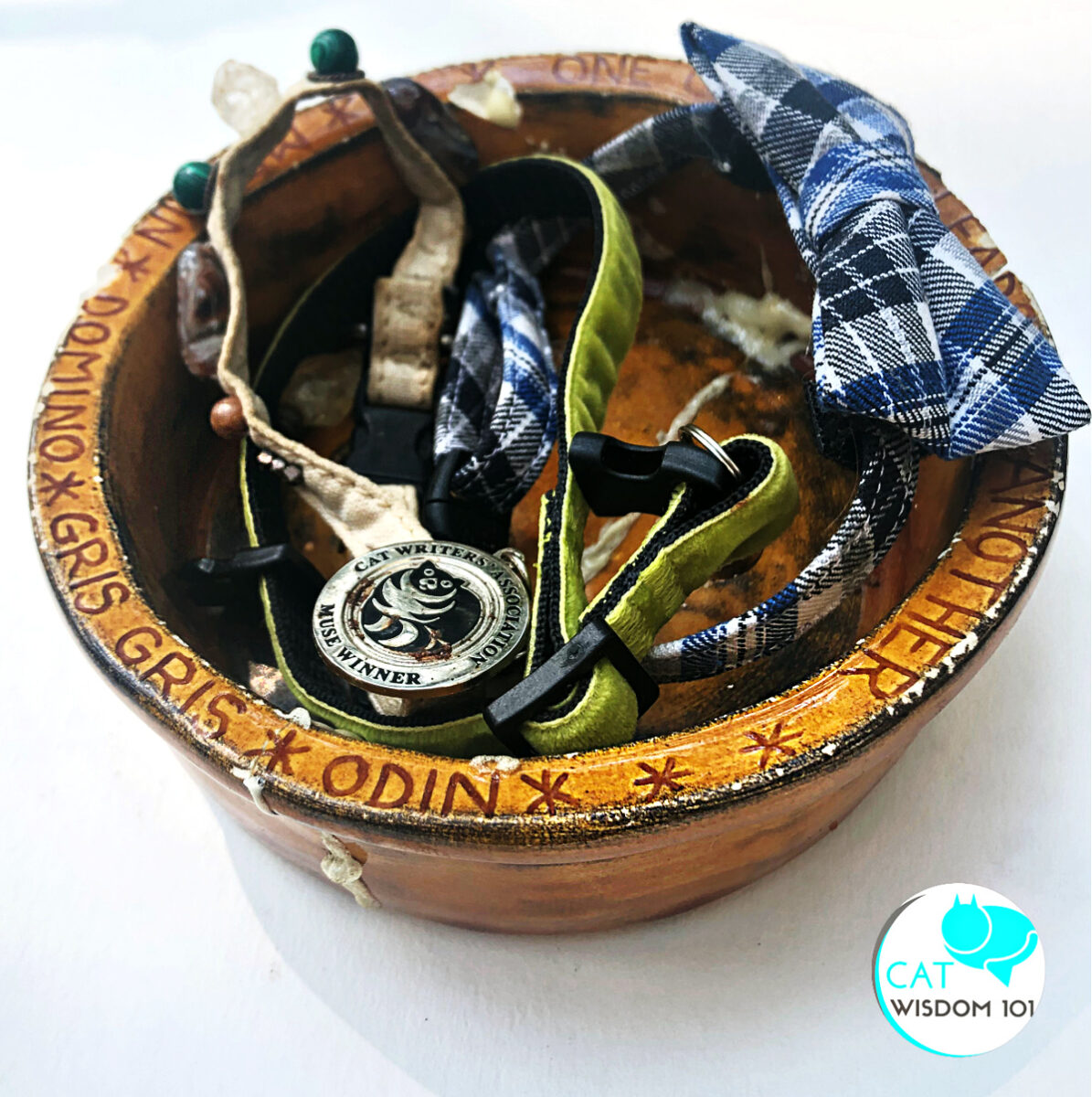 They say time eases the grief of losing a beloved cat.  I can only speak to my own experience, but the reason I love memorial gardens is to see the passage of time. Nature keeps reminding us of the cycles of nature. No matter what; the seasons keep turning, shifting from blooming, dying and blooming again.

Feel like making a mossy memorial garden? Here’s how

Since creating Clyde and Domino’s this past spring, I stop by most days to say hello and see the changes. The ground cover has spread nicely but the scorching heat dried the moss. But no matter, come spring, the moss will be green again. Their furry bodies are skeletons now but I prefer to think of all my angel kitties as ever changing forms of spirit. 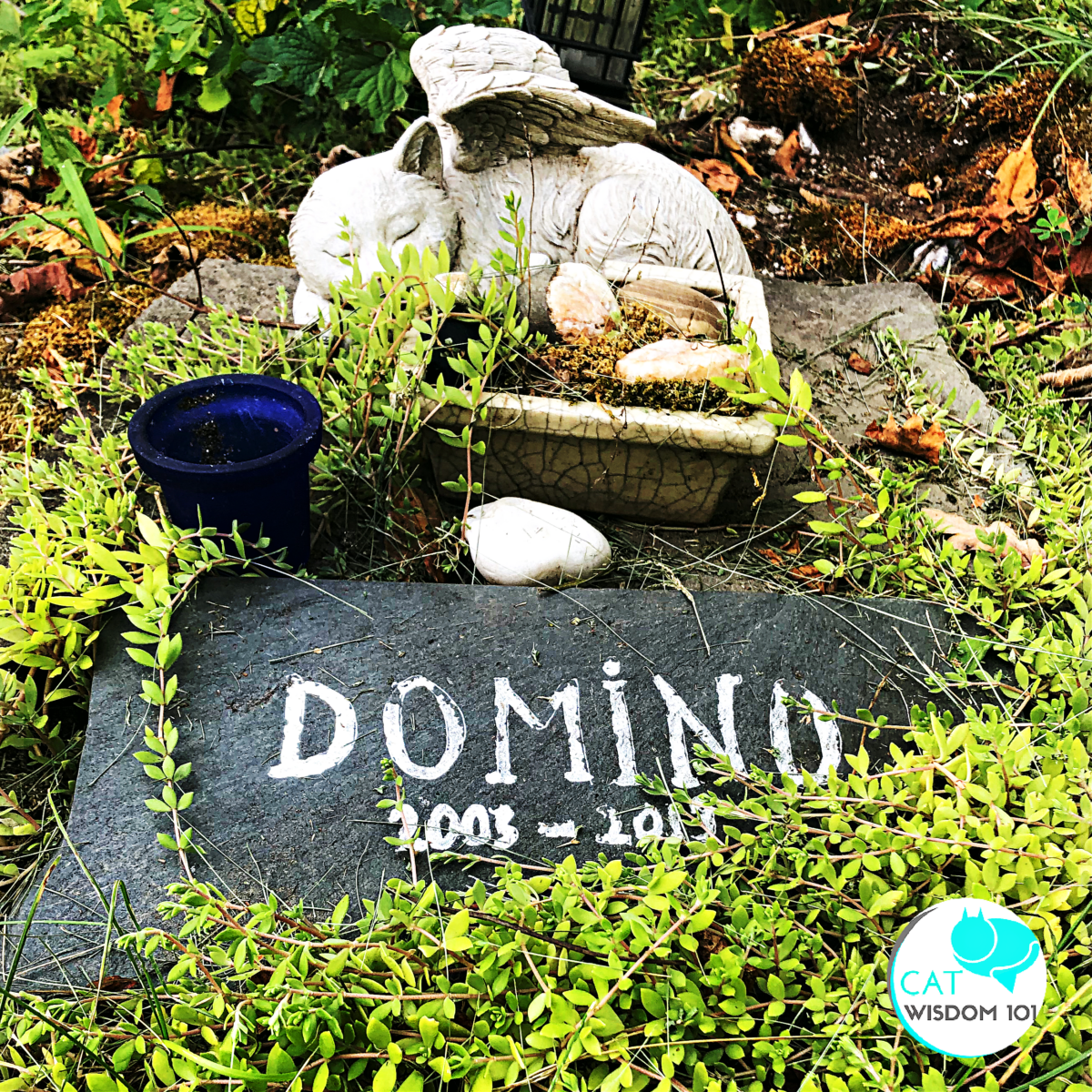 I believe no one really understands the depth of pet love until they know loss. I also believe we are richer for it. 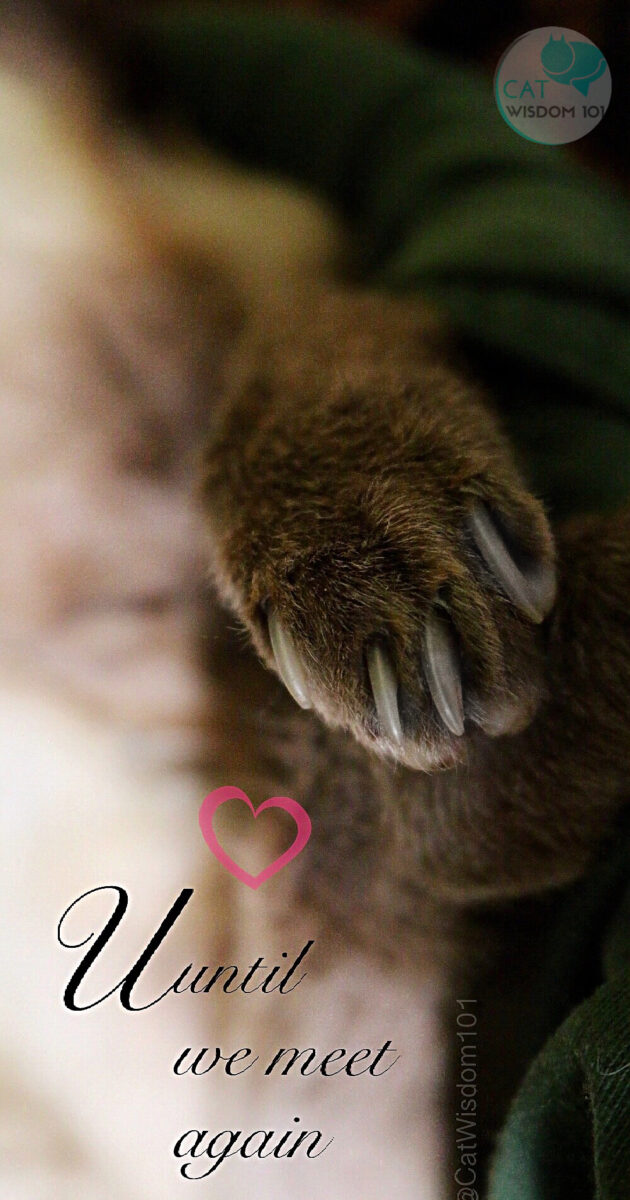 Are you remembering any special cats today? What are their names?