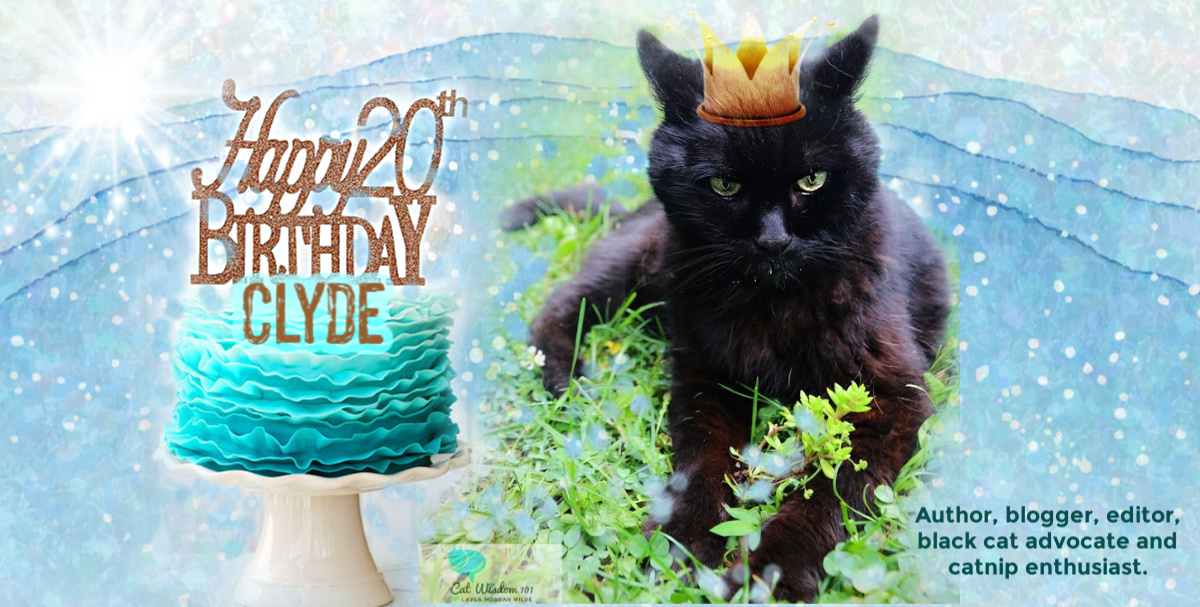 “Oh! I have slipped the surly bonds of earth and danced the skies on laughter-silvered wings…”

How do you celebrate a cat’s 20th birthday when you know they’re dying? As I write this on the eve of Clyde’s birthday, I don’t know what to say. He’s used up his nine lives and yet always manages to pull out a spare. I’ve mentioned Clyde’s decline so often, I’ve become an unreliable narrator but as of January 17, Clyde has come to the end of his quality of life. The plan is a gentle euthanasia perhaps as early as his birthday unless he has other plans. You never know with cats.

He’s not a cake and balloons kind of cat. Being a practical Capricorn, he doesn’t like fuss. 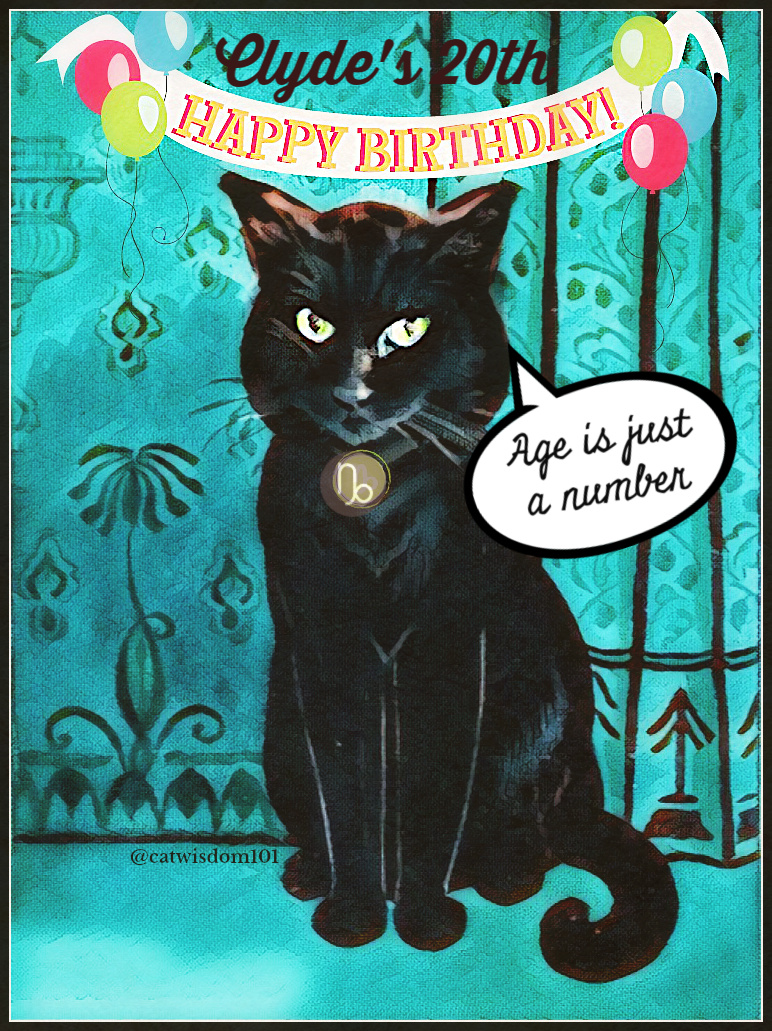 If you’re reading this on the weekend, he may have already beat a hasty exit to the great beyond. Our next post will be a tribute. In any case, I invite you to raise a glass and toast to his memory and 20 glorious years. Join us on Instagram @blackcatsofIG where a groundswell of love and good wishes abound. I made a few little videos last week with the last day Clyde was still walking, alert and enjoying the sunny day.

One of our favorite cartoonists paid tribute. Humor transcends everything or at least is a balm for an aching heart.

Clyde was already a senior cat of 16 when we brought him home from the shelter ill with CKD and un-diagnosed diabetes. He rebounded and enjoyed a good quality of life. A few months later he celebrated his 17th birthday when he discovered the joys of catnip. 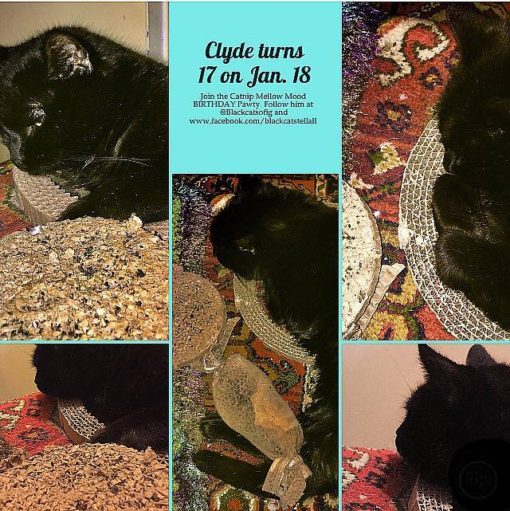 Clyde adapted to his new life and new role as a blogger, editor and author. Maybe you can’t teach a dog new tricks but cats like to surprise us. If you haven’t read his rather outlandish story in Black Cats Tell All: True Tales And Inspiring Images titled: The Catnip Made Me Do It. He’d love everyone to give a copy to a friend for their birthday.

Of course catnip or anything else could not make Clyde do anything he didn’t want to. Stubborn is too common a word. Recalcitrant is more apt. Life and a weekly blog Mondays With Clyde dispensing his droll wit, wisdom and wizardry continued. He followed seamlessly in the paw prints of our Cat Wisdom 101 muse, the late, great Merlin.

There were health scares and gradual decline with unexpected upswings. Turning 18 was pretty sweet. Always on the shy side, he developed a man cat about town confidence. 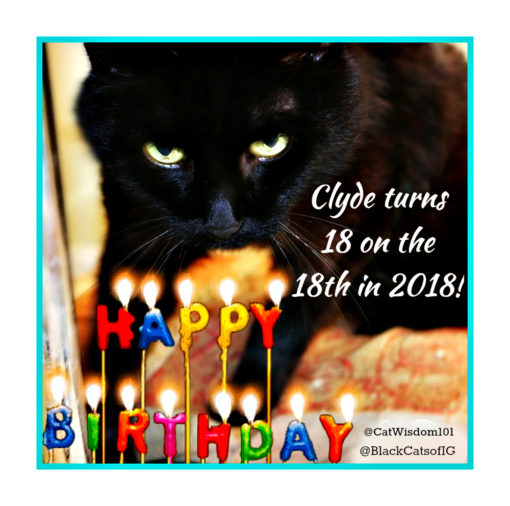 Clyde made a regular appearance on Instagram but preferred sharing the limelight with other fabulous black cats. Life continued with the usual routines. Clyde and Odin their almost daily interaction of Clyde politely escorting him downstairs from his third floor lair. Before you knew it, another year had passed. He was blogging less often and he turned 19 but looking as handsome as ever. 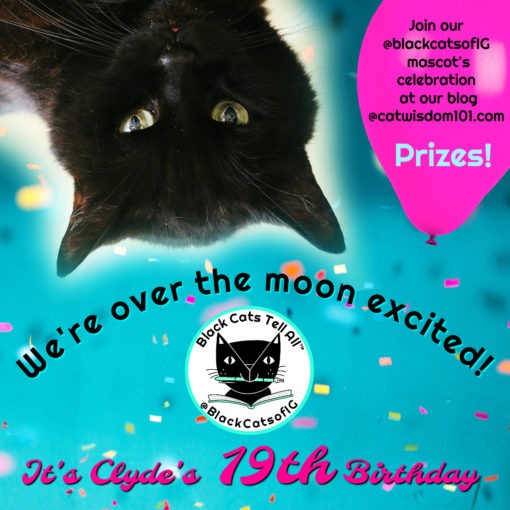 Clyde’s 20th birthday is a cause for celebration for sheer will power and passion for life. Clyde does not agree.

Who would have ever guessed at the ripe old age of 19, Clyde’s life would take an expected turn towards the BEST SUMMER OF HIS LIFE. We moved house and he loved it. He changed overnight and wanted, no insisted to go out in the garden every day rain or shine. My understanding was that he’d always been an indoor cat. Luckily I’d stayed in touch with his former owner and she said he’s escaped and went missing once for six weeks! Shy, homebody Clyde forever a mystery.

Clyde’s health continued to decline but the summer garden time was a tonic where he lounged and prowled the bushes like a mighty panther. 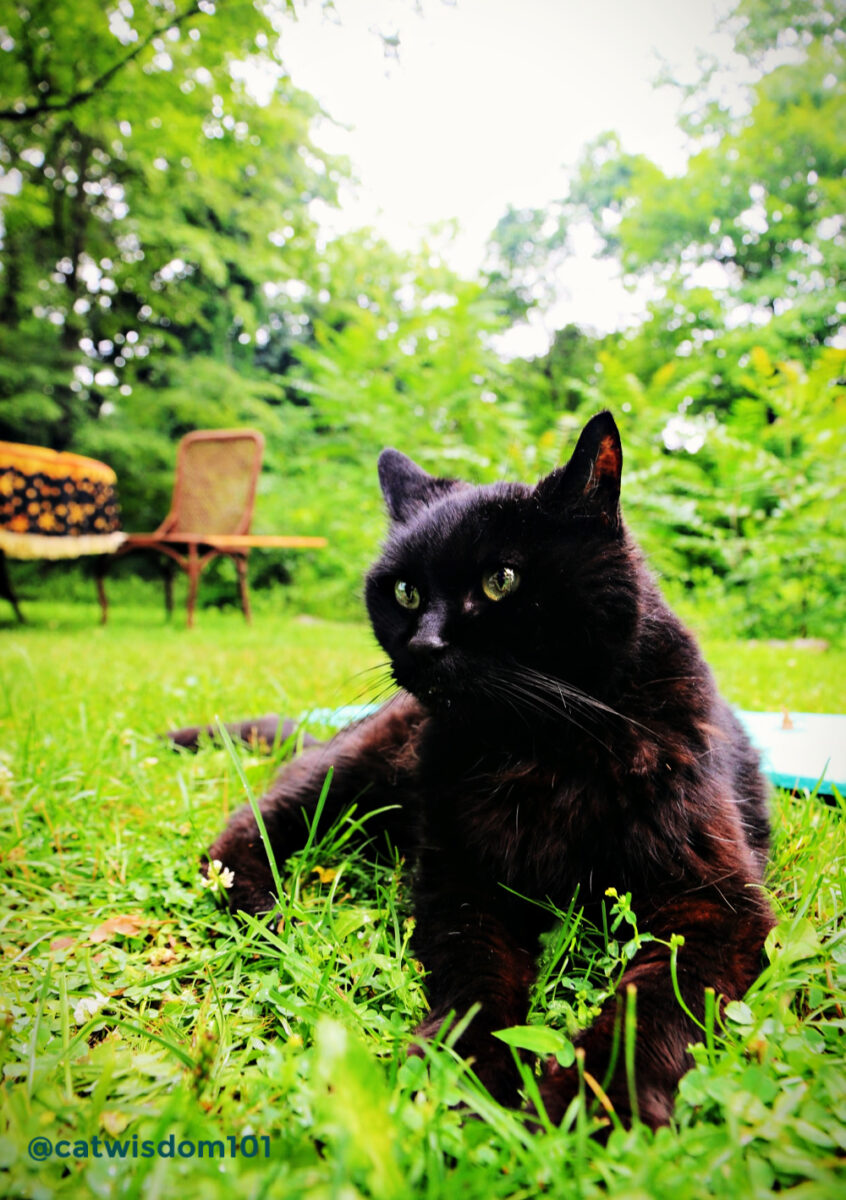 Autumn weather pleased him and he was miffed when it got too cold. To compensate for his daily sun fix, I placed steps he could climb up to my massage table near the two huge windows. We’d enjoy snuggle time and watch the clouds go by while dreaming of new projects. It’s been a mild winter so far and Clyde enjoyed a nip of fresh air almost every day since this week. 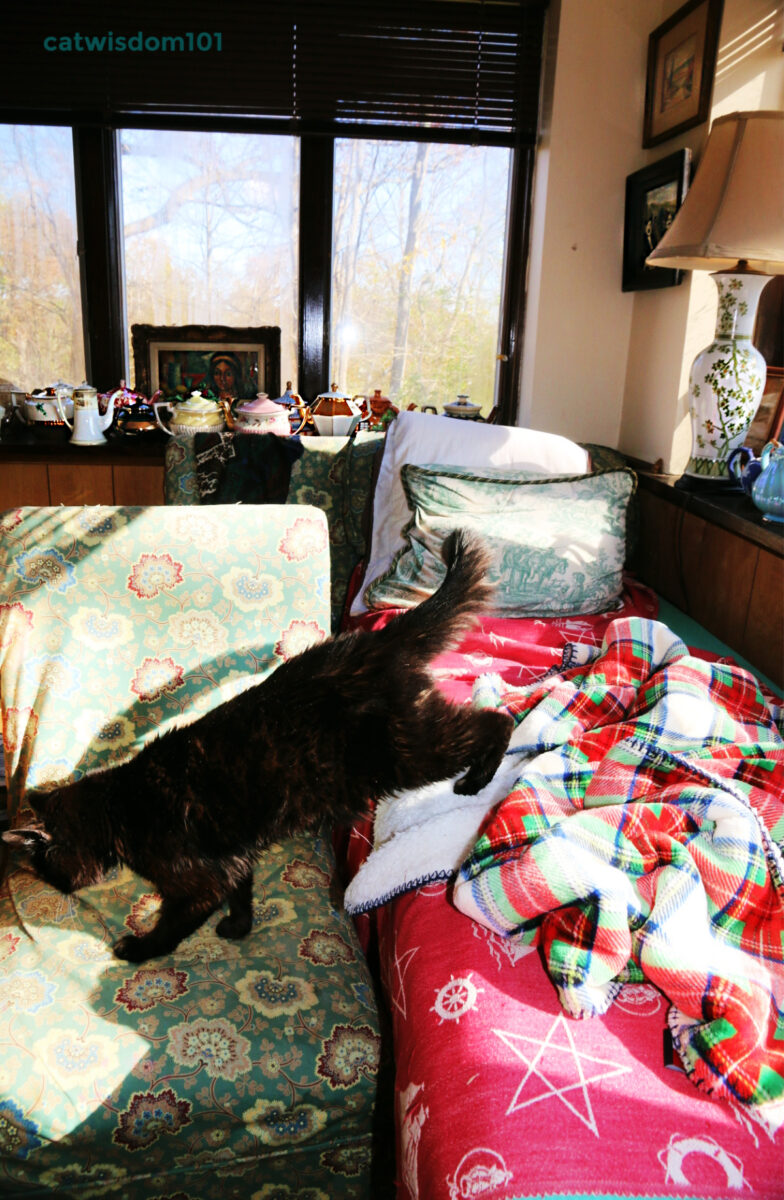 The colors of Autumn turned dreary and then stone cold gray when Domino died in early November.  Although they weren’t close, they shared a quiet rapport like two old gentlemen. Domino had difficulty going up stairs any more so he slept in the living room near Clyde’s hidey hole nest by the fireplace. After Domino died, he refused to go there and I made a new nest with a heating pad nearby. 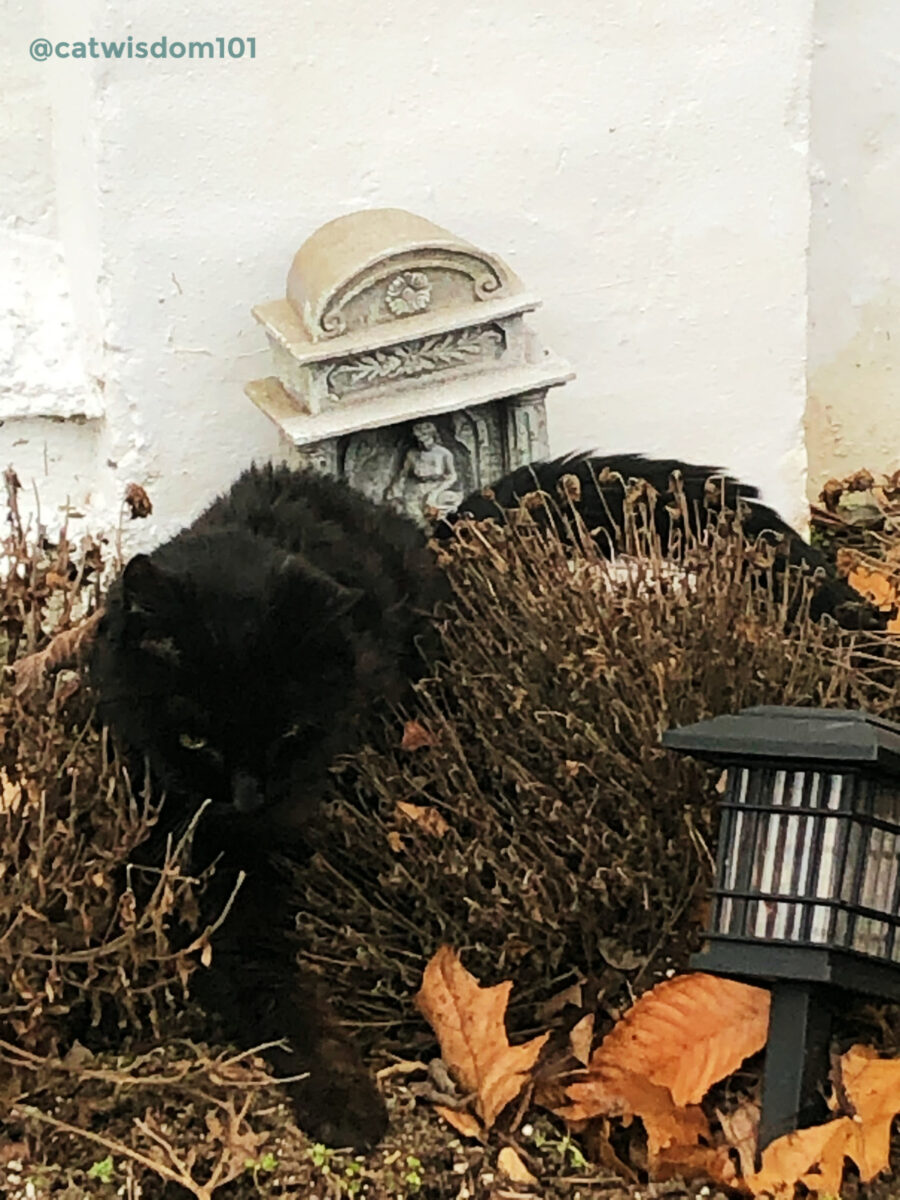 Clyde’s diabetic neuropathy made walking harder but he’s drag himself upstairs every night for an extra midnight meal. We’d know he wasn’t feeling well when we wouldn’t hear the shuffle drag of claws scraping along the corridor. Gradually his world grew smaller and it was too cold to go out much. It was harder to the climb up to the massage table so I’d pick him up. Then he no longer wanted to be picked up. 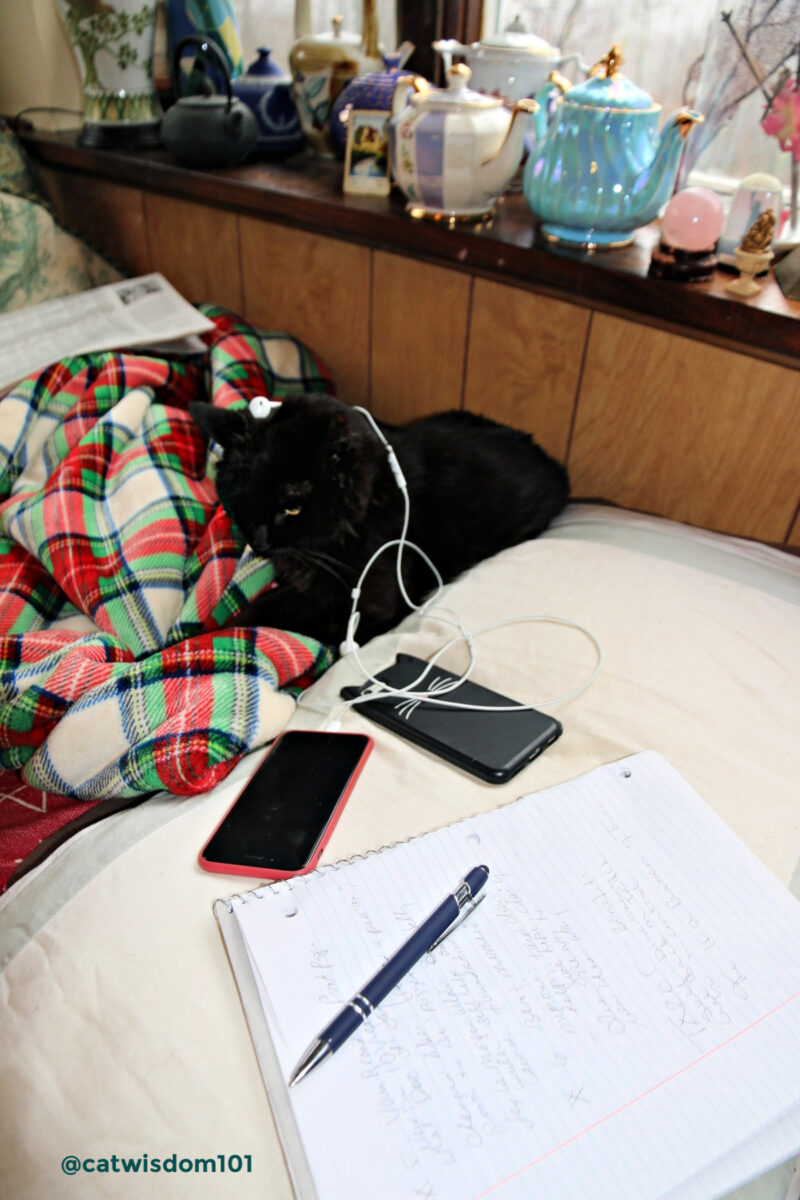 His gait turned more drunken sailor lately but he was hellbent on getting up if he wobbled and fell. There were more good days than bad but in the past week he could barely walk and in the past couple days, not at all.

Cats especially Clyde as fastidious about their toilet and last week he had his very first accident. There are puppy pads outside the litter boxes but he peed all over himself and I had to bathe him. His thick coat was getting scruffy and matted despite frequent brushing. He felt and looked so much better but we know where this is headed.

I managed to snap a few on a good day for an official birthday portrait. 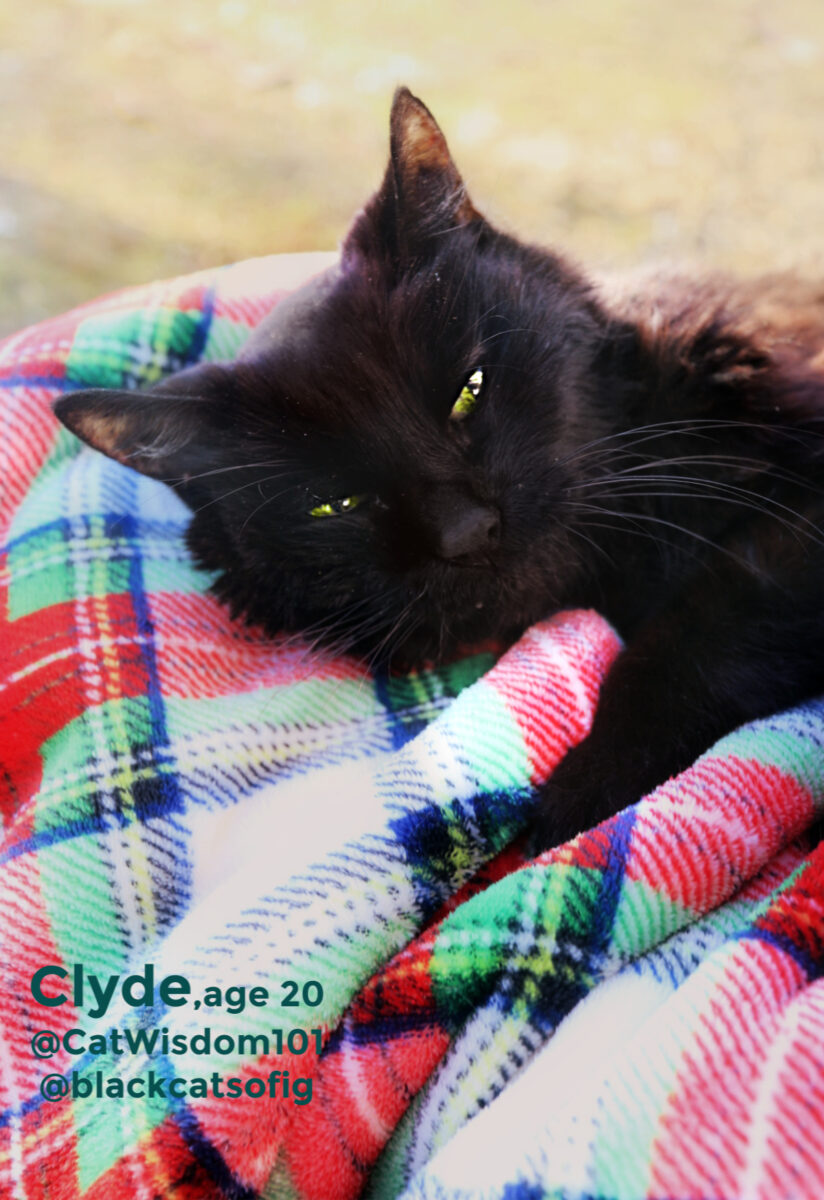 For three years he managed to keep his weight stable by being fed on demand 24/7. Kidney cats all grow thin eventually but Clyde didn’t grow bony until very recently and suddenly. Another huge red flag.

Last weekend we thought this is it. I brought him upstairs so he wouldn’t be alone and could have sworn he died at 4 am. There was no sign of life and told hubby he’s dead. In the morning, Clyde made a miraculous recovery enjoying blankie time on a freakishly warm day. He ate, drank, used the litter box, snuggled, all normal activities but just in case, hubby dug a grave beside Domino’s. It was an awful roller coaster preview of grief.

Since then it’s been a sleepless vigil monitoring his progress or lack there of. The thought of doing anything celebratory felt hollow. Well, except this. Clyde would heartily approve and say NO! to all birthday shenanigans. The hat was from a birthday party I attended for Grumpy Cat who is probably still saying NO! in kitty heaven. Knowing Clyde, he’ll be holding court with Grumpy Cat, Lil Bub and many, too many black cats featured in our book that have died. 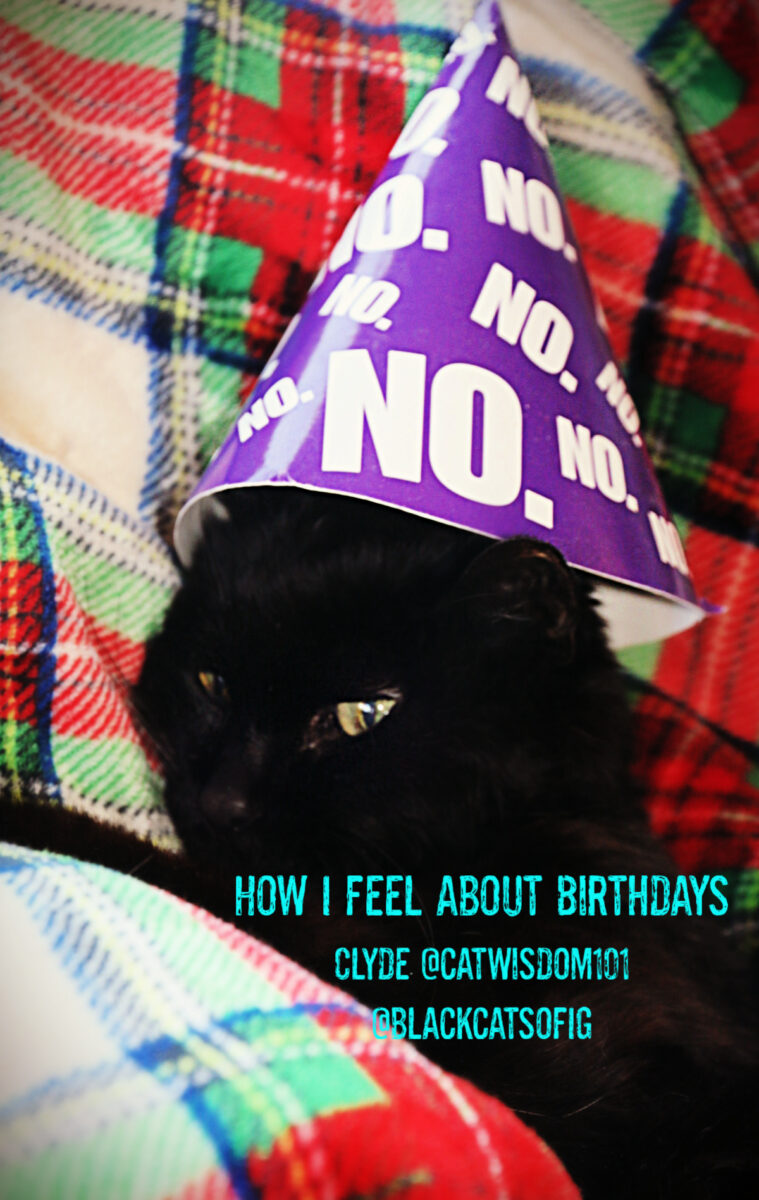 Thanks for stopping by and take a batch of virtual catnip for your cat with our love and appreciation,