It’s fun to look at silly cat videos like the one here of Odin and Domino wrestling but they aren’t doing it for our amusement. Some cats never outgrow the kittenish desire for roughhousing. It’s great way for cats to bond and to get exercise. Usually any serious play aggression fades when kittens become adults. The play “fighting” and aggression serve as a safe education in hunting and defence. There’s a lot of tactical attack/retreat stalking, pouncing, prancing, play biting and pinning their “prey”.The rough play might at first glance appear aggressive but if you watch the subtle signals, it’s clearly as benign and choreographed as a WWW wrestling match.

Domino usually signals Odin to a match with a distinct call. They take turns, chasing each other, pouncing and being pounced on in an every changing display. After two years, they have some pretty sophisticated moves down. When they’ve had enough one simply walks away until a re-match. When the guttural vocalization and thumping get loud, I’ll check in on them but they’ve never gone past play into true aggression. It’s a fine line but obvious once crossed. True aggression will have prolonged hissing, growling, scratching, biting and possibly drawing blood. The ears are flattened to the side, teeth bared, fur on the back and tail bushy.The movements are quick versus the delicate, slow touches as demonstrated in this video. Aggressive cats don’t take turns playing defensive or offensive and afterwards the friction continues. 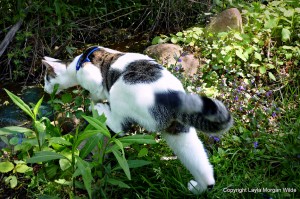 For cats who play too rough or don’t have a wrestling partner, a stuffed animal is a good substitute to redirect their energy. The plush animal, ideally the size of a kitten or larger can be led on rope as part of interactive play with a human but never allow the cat anywhere near striking distance of you hands or feet. To break up aggressive play with two cats, redirect their attention with or throw a pillow to separate them and allow the bullied cat to escape. Closing the door to keep them separate until they cool down is best.

Odin is always up for adventure and he’s competing today in Next Top Cat from AmazeCats and as the undercat really needs YOUR vote. Voting is only on Facebook but it’s quick and easy here. He’s also a new member of the Tabby Cat Club. 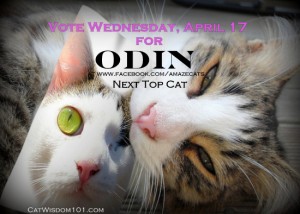 22 thoughts on “Cat Wrestling Video With Odin and Domino”