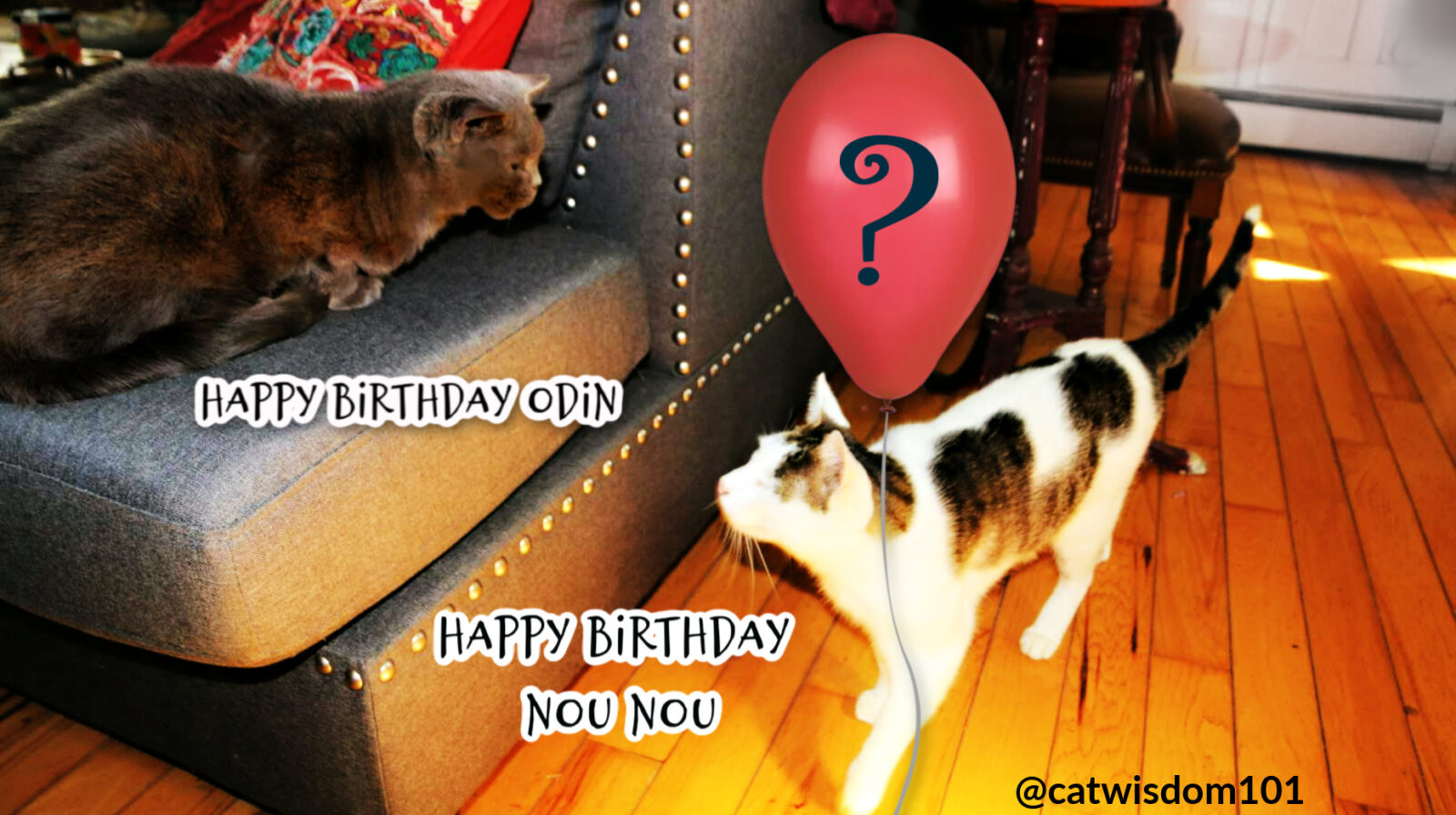 There won’t be silly hats or catnip cake this year but adventure instead. Both Odin and Nou Nou, our one-eyed cats are Geminis. I don’t know their exact birth dates but the best guesstimate is early June which is Gemini season. Odin is turning ten and basically has grown up on this blog. He’s come a long since his first birthday. Who remembers this? 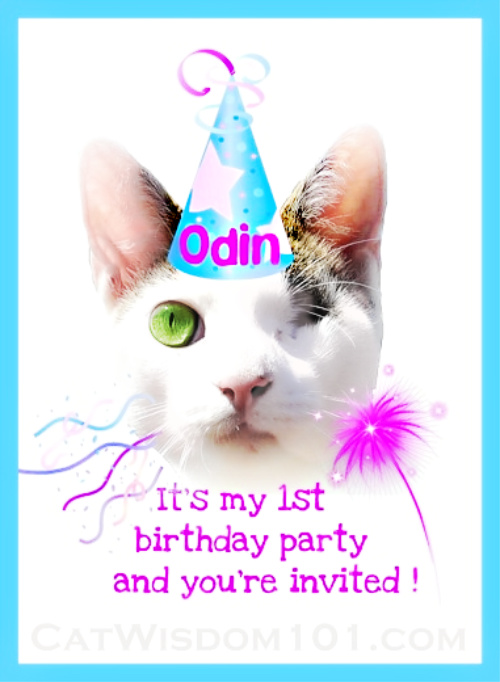 Nou Nou has always been less visible and is turning 8. Both live up to their high strung, super intelligent Gemini purrsonalities. 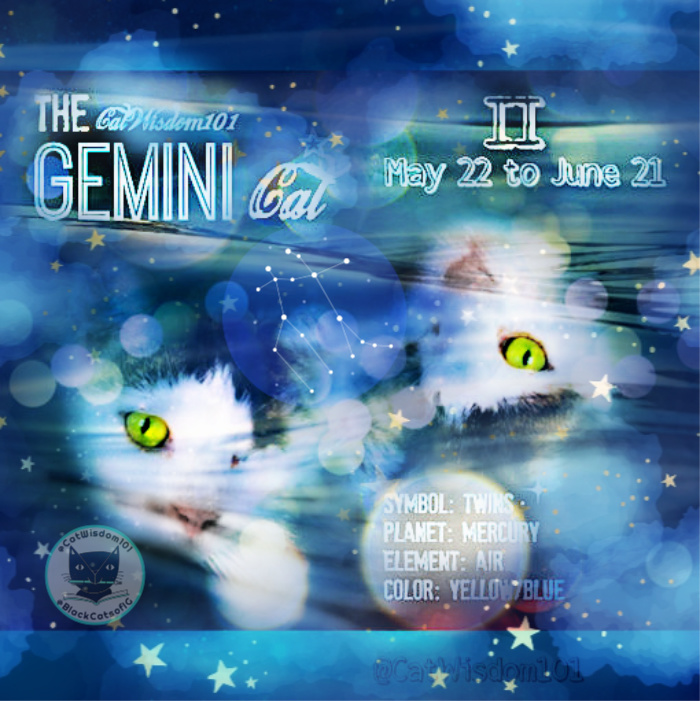 Ever restless no matter how how freedom he has. Odin displays his many moods in this recent and short photo shoot. Pinch and zoom to see his sweet and silly face up close. 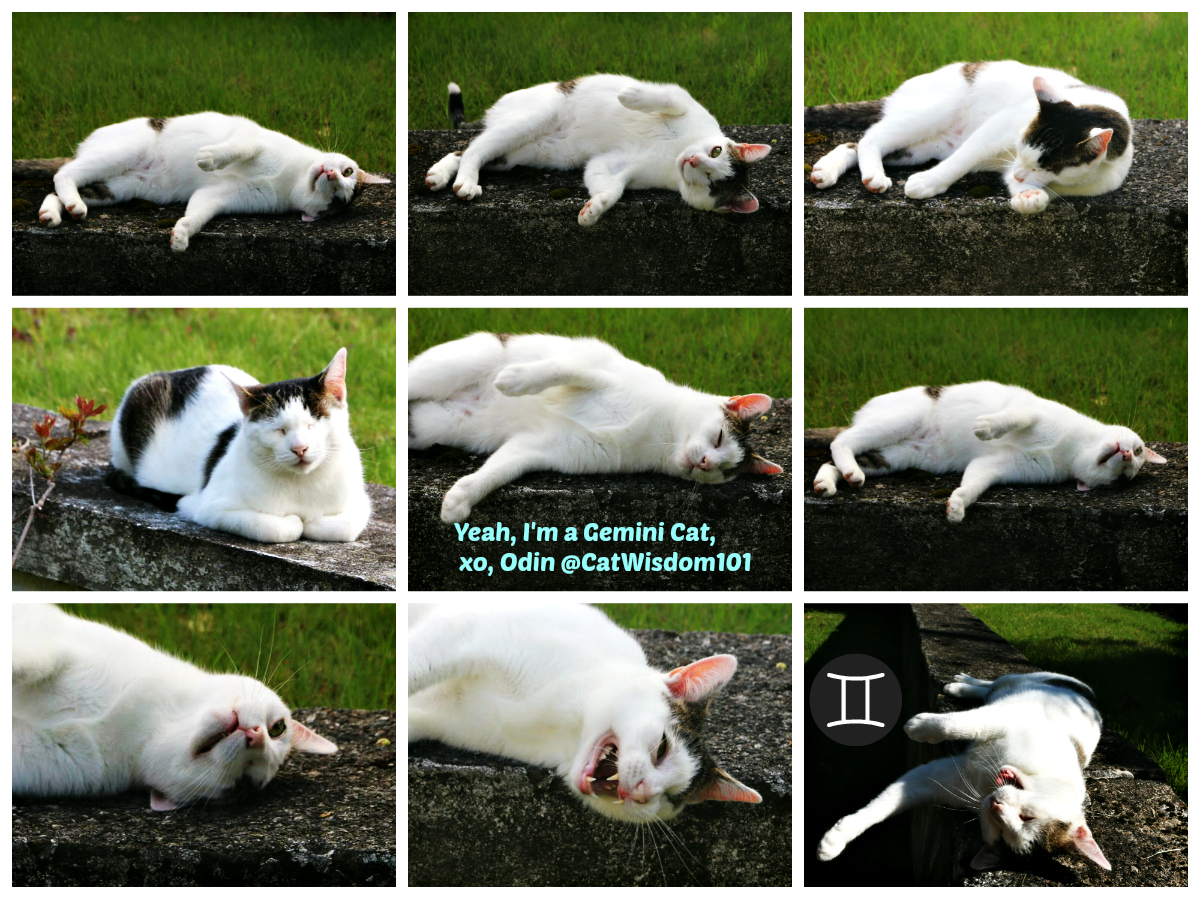 Humans say that their kids grow up fast and it’s even faster for furkids. Where did the years go? Both Nou Nou and Odin are technically seniors now, but you wouldn’t know it to watch them. Odin is still the mighty hunter and tree climber although his tree climbing adventures are less frequent. Nou Nou still runs and jumps like quicksilver.

This year Nou Nou is the poster girl for “Expect the unexpected”.

Nou Nou is a special needs cat with physical and emotional issues from being a hoarder cat for the first year of her life. She came to us as a foster and we decided to adopt her when we realized she was less adoptable and should not have been in a shelter. She has never lost her feral roots or low confidence. She scurries like a rat and I’ve never seen her walk with an upright confident tail despite being loved and coddled.

She’s different and we love and accept her just the way she is.

When we moved last year from the only stability she’s ever known, she chose to limit her territory to two rooms on the second floor. She’s a late bloomer in every way and we were delighted when she expanded her territory downstairs. Hello, living room! 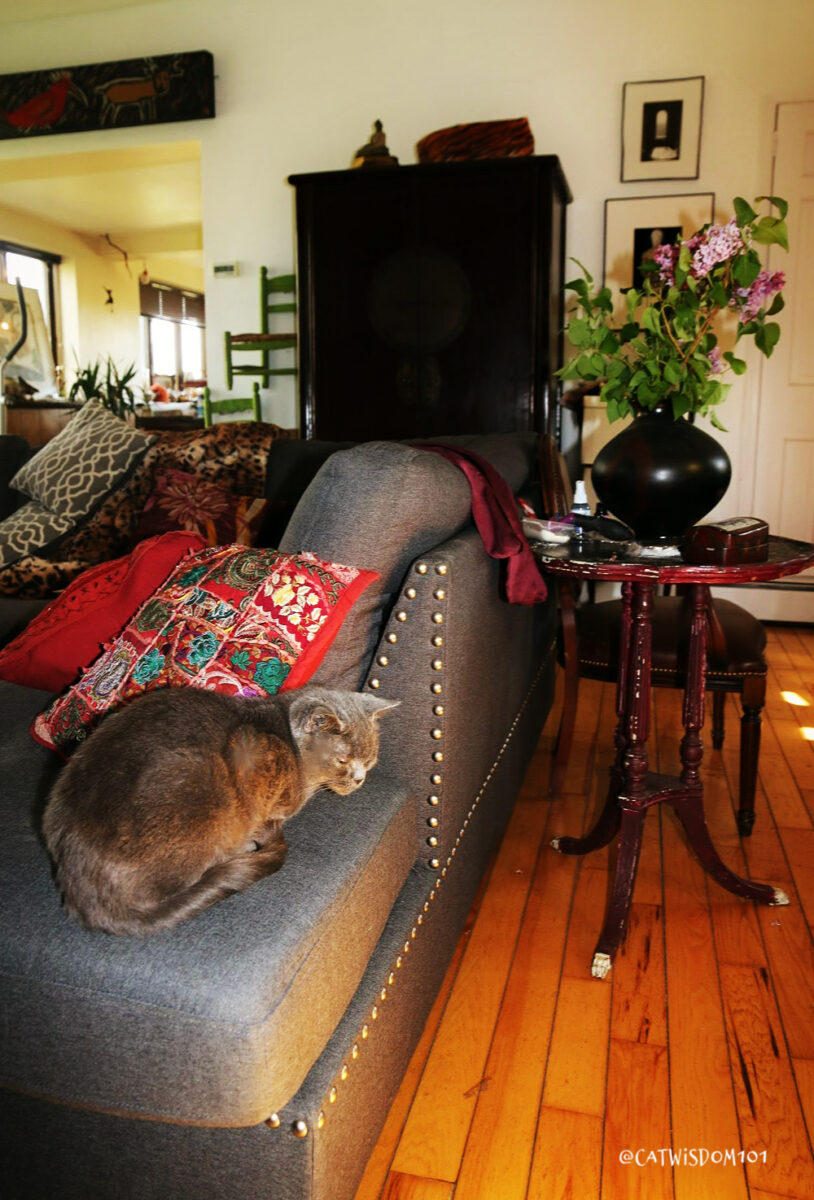 She started with the sofa, took over Clyde’s old cubby hideaway and hasn’t looked back since.

She even loafed on Domino’s favorite place. It was so sacrosanct that no one has touched since he died last November. 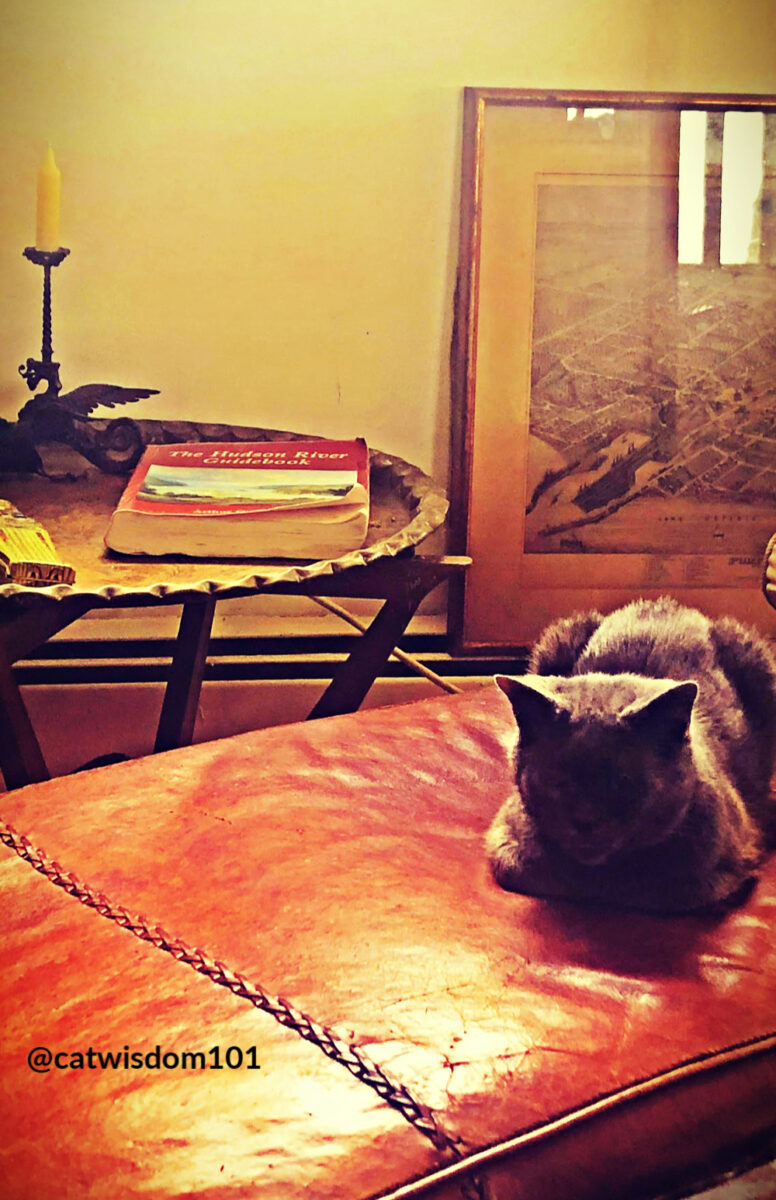 and I had to do a double-take when I found her one morning sunbathing in the kitchen on Clyde’s favorite lounge. I’d missed seeing him there and who knows what Nou Nou will do next. Take up photography? 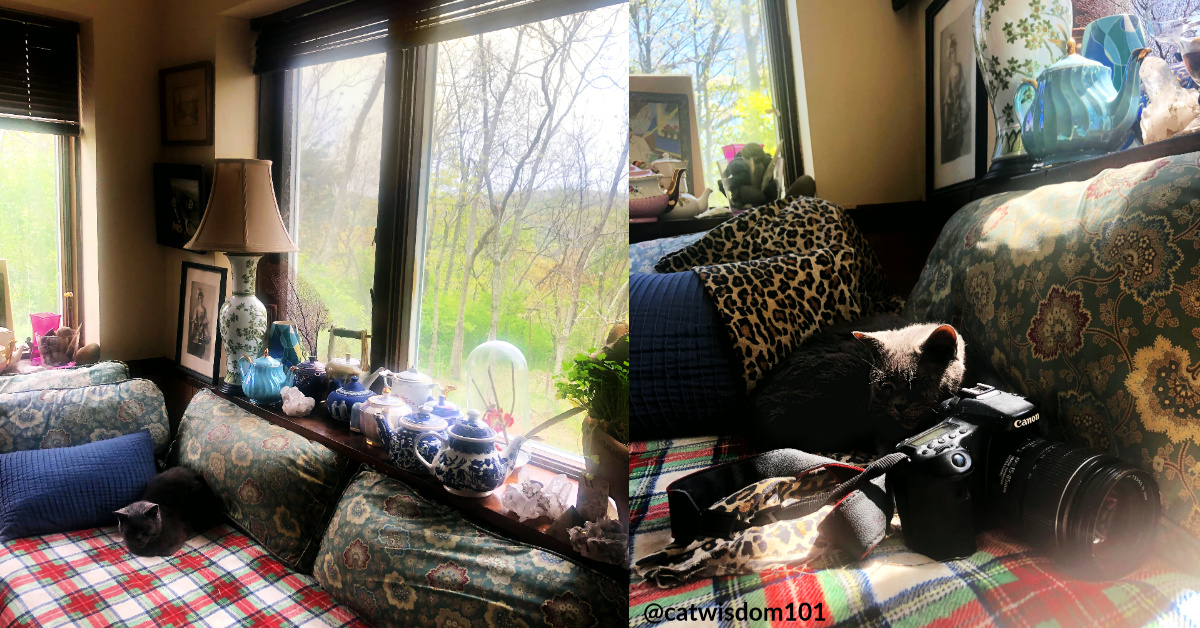 She recently discovered the joys of laundry, baskets that is. 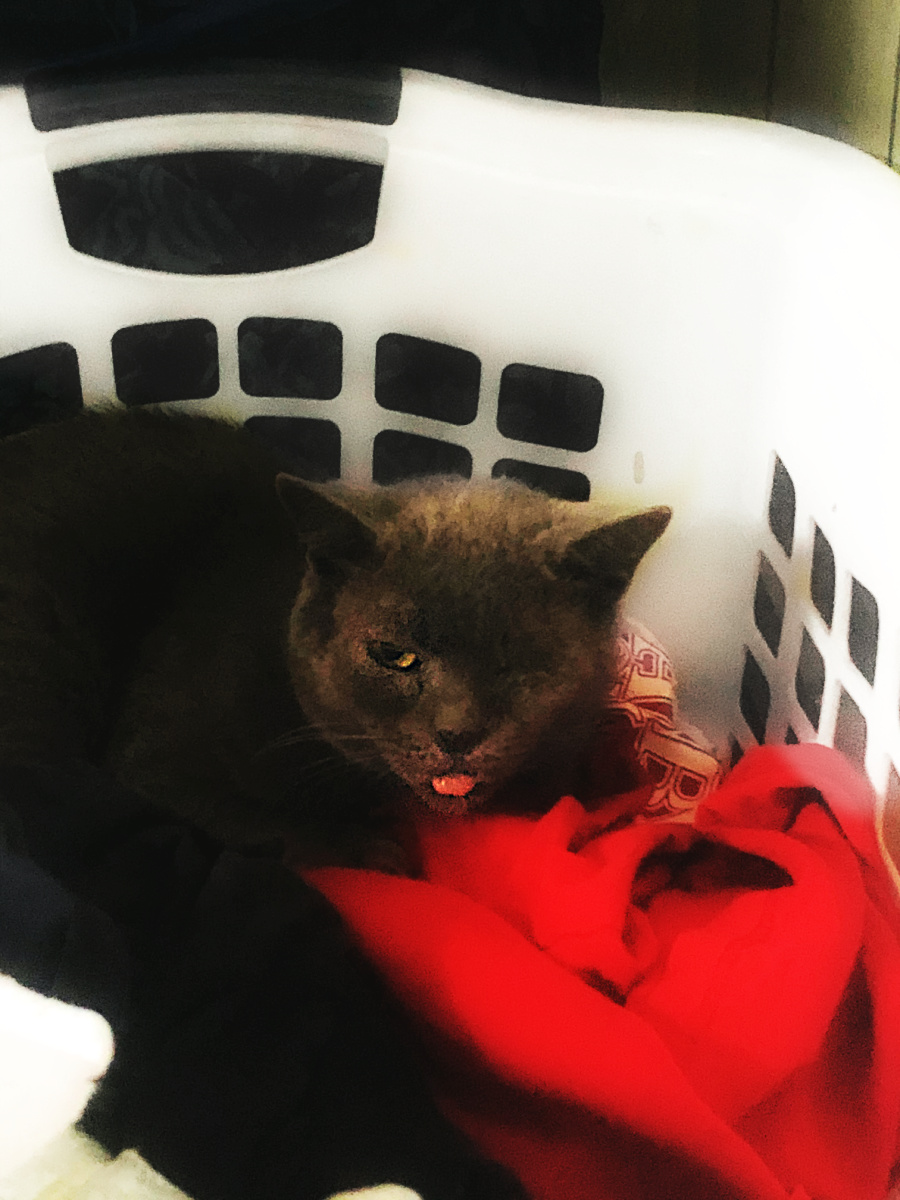 Nou Nou is a cautious cat and not a risk taker so imagine my surprise when she noticed Odin go out the front door and followed him outside. Just like that. This is a cat who has never been outdoors and has never expressed interest in venturing out.

It was a bizarre déjà vu of a year ago when Clyde, an indoor only cat suddenly wanted to go out at age 20! 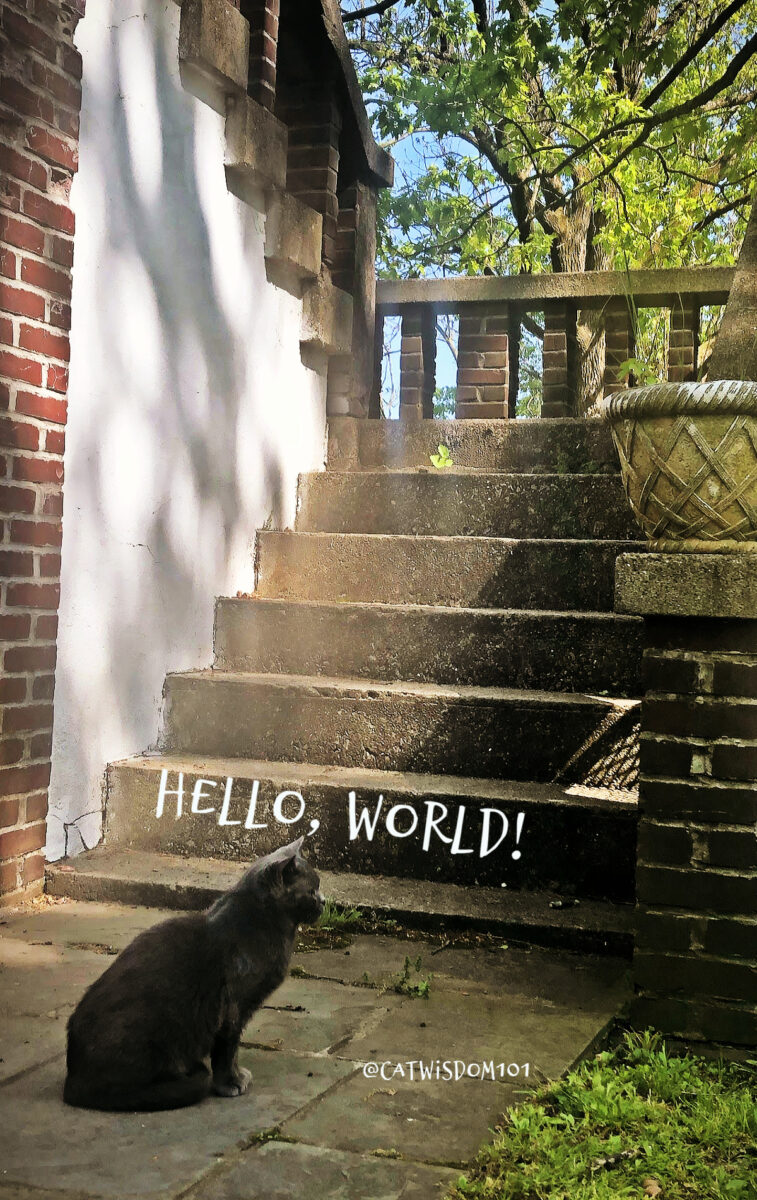 Two weeks ago she scampered a few feet from the door and sat down at the edge of the slate patio. Her one eye widened and her neck swiveled taking in the sights and smells, the movement of leaves and breeze of a new world. Astonished is the only word that comes to mind. After about five minutes she ran back inside.

With this new wrinkle in her psyche, we decided to keep a closer eye on her and the doors. Nothing happened. Then three days ago, on the full moon, as a thunderstorm brewed, Odin wanted to go out for the umpteenth time that day, and Nou Nou followed. Naturally I followed them. The energy felt electric and I didn’t want her to go far. She followed Odin up the staircase to his favorite viewing spot on the balcony. I had my phone and filmed for a few seconds (I may upload the video later).

Just as I was about to say, isn’t that cute, without any warning or hesitation, she took a flying leap off the balcony, landed on the awning and from there jumped down to the patio. A suicide attempt? Full moon crazies or simply adventurous cat?

It was a distance of about 8 feet from the awning and while not dangerous, I wondered if she could gauge distances and what if it had been higher?

I ran after her calling her name (she’s knows it but never responds to it) as she sprinted to the side of the house with Odin giving chase. I’d never seen her sprint that far and bouncy like a rabbit. The shock of her jump prompted her to poo and Odin kept a close eye on his reckless sisfur. 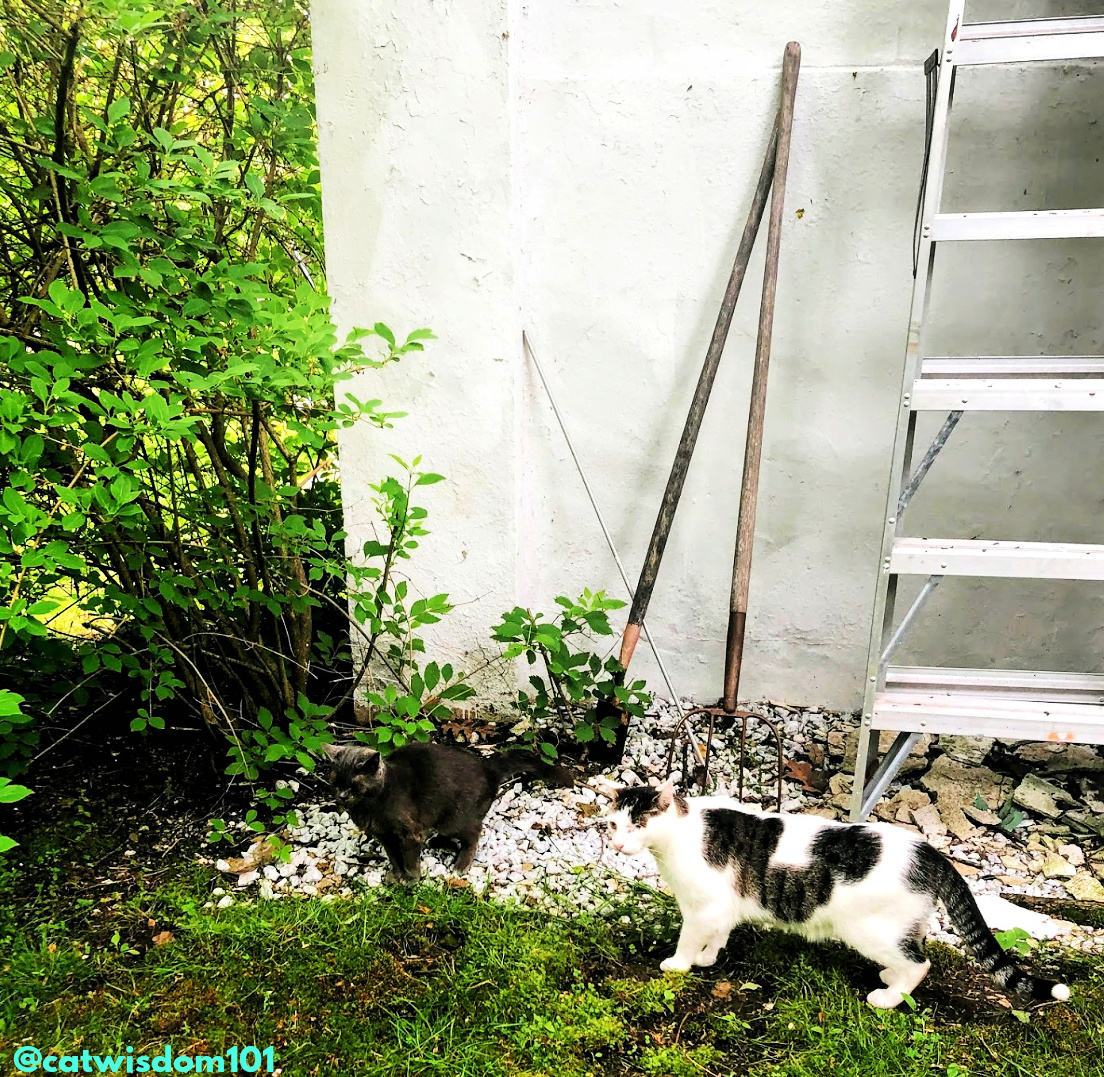 He was suddenly in protective brother mode which reassured me. Since Nou Nou wasn’t listening to me, I asked Odin to round her up and bring her home. He’s been helpful in the past locating her, not unlike a retriever.

Odin to the rescue!

She ran into the same bushes in the backyard Domino ran to on his first day here. Odin followed and and after a few minutes  escorted her out. They gamboled a bit on the lawn and then then she made a beeline to Domino’s and Clyde’s memorial garden (more about that in another post). 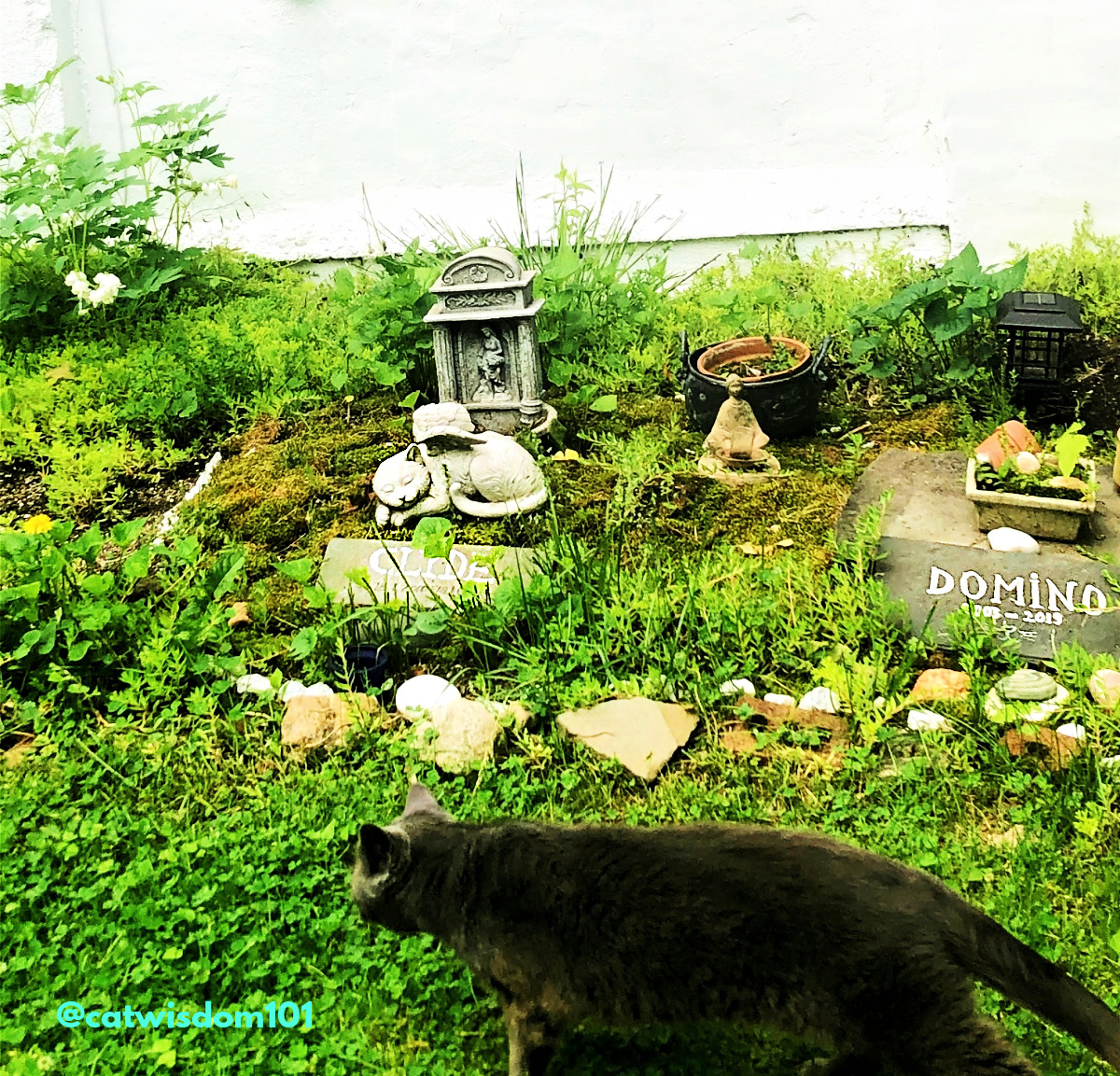 Nou Nou sniffed about the grave and ran back into the bushes. It was starting to rain and I was getting nervous. She isn’t a cat that likes to be picked up and isn’t shy about scratching. Odin chased her out from the bushes again and she zigzagged to the front of the house. I stood by the door and coaxed, “Come inside.” Odin made sure she got inside and she disappeared in the security of an open cat carrier we keep in the laundry room. 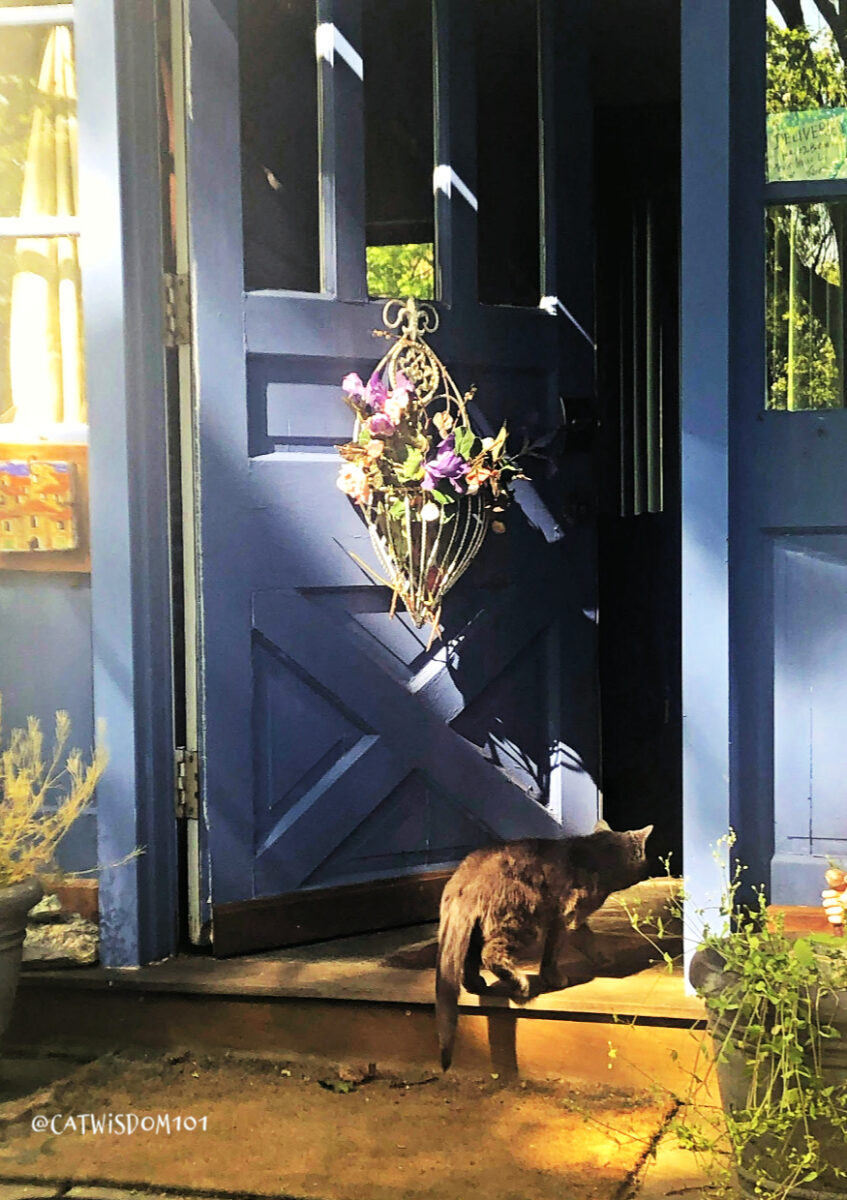 Today she peeked out the sliding back door and ventured out for a minute. We are no longer keeping doors wide open and must come up with a safety plan. We have no issue if she wants some supervised outdoor time but the question is how.

Nou Nou has never liked any birthday hoopla but I think her outdoor adventure counts as a good present. She can dream about her next adventure from her new favorite place.

What do you give a cat like Odin who has everything? Why, his very own adventure trail in the woods called Odin’s Way 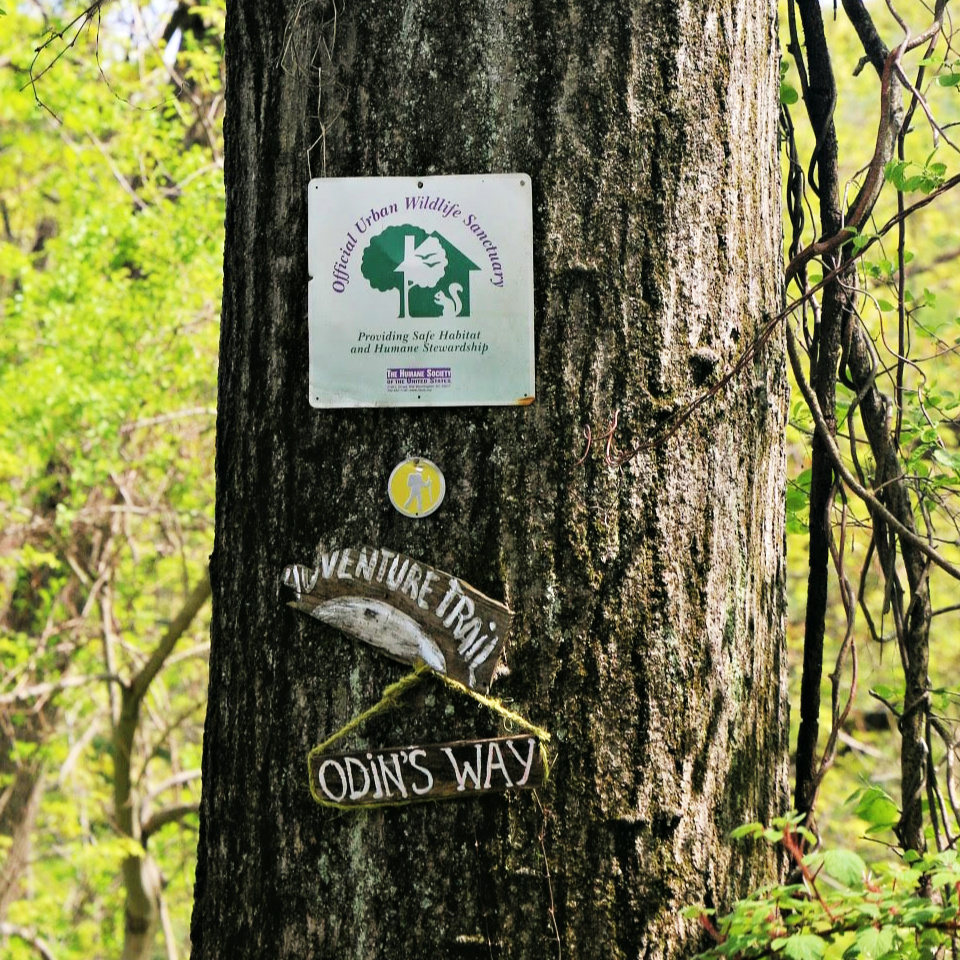